You are here:
Home / Alex Kidd In Miracle World DX Preview: A Relic Of A Forgotten Age

Alex Kidd In Miracle World DX Preview: A Relic Of A Forgotten Age

With Sega seemingly forgetting about its back catalog of classic games until very recently, it had fallen on other devs to license out nostalgic franchises and do something new with them. This trend started in 2017 when indie developer Lizardcube created an incredibly faithful remake of the 1989 Sega Master System title Wonder Boy: The Dragon’s Trap. Utilizing a hand-drawn aesthetic with visuals layered on top of the original game, it was praised for its creative reimagining of the retro classic while also bringing new light to some of Sega’s lesser-known properties.

That’s what made the announcement of Alex Kidd in Miracle World DX so intriguing. Developed by a completely different studio at Jankenteam with publishing by Merge Games, it looked to follow in the footsteps that Wonder Boy laid out a few years back. Sharing a lot of the same design philosophy of layering new visuals on the original Master System game, I was eager to see what would come of this remake.

In a short preview provided by Merge, I had a chance to take a look at three different levels from the title. Right off the bat, the visual style is absolutely wonderful. On my 4K display, the chunky pixels look brilliant and the reworked art style remains faithful to the original while also bringing a kind of retro indie charm to it. You could convince me this was a brand-new game evoking the style of a classic and I would believe you. There’s just an exceptional level of detail all around, right down to how some of the borders in smaller levels are obscured to retain the original 4:3 aspect ratio of the Master System. 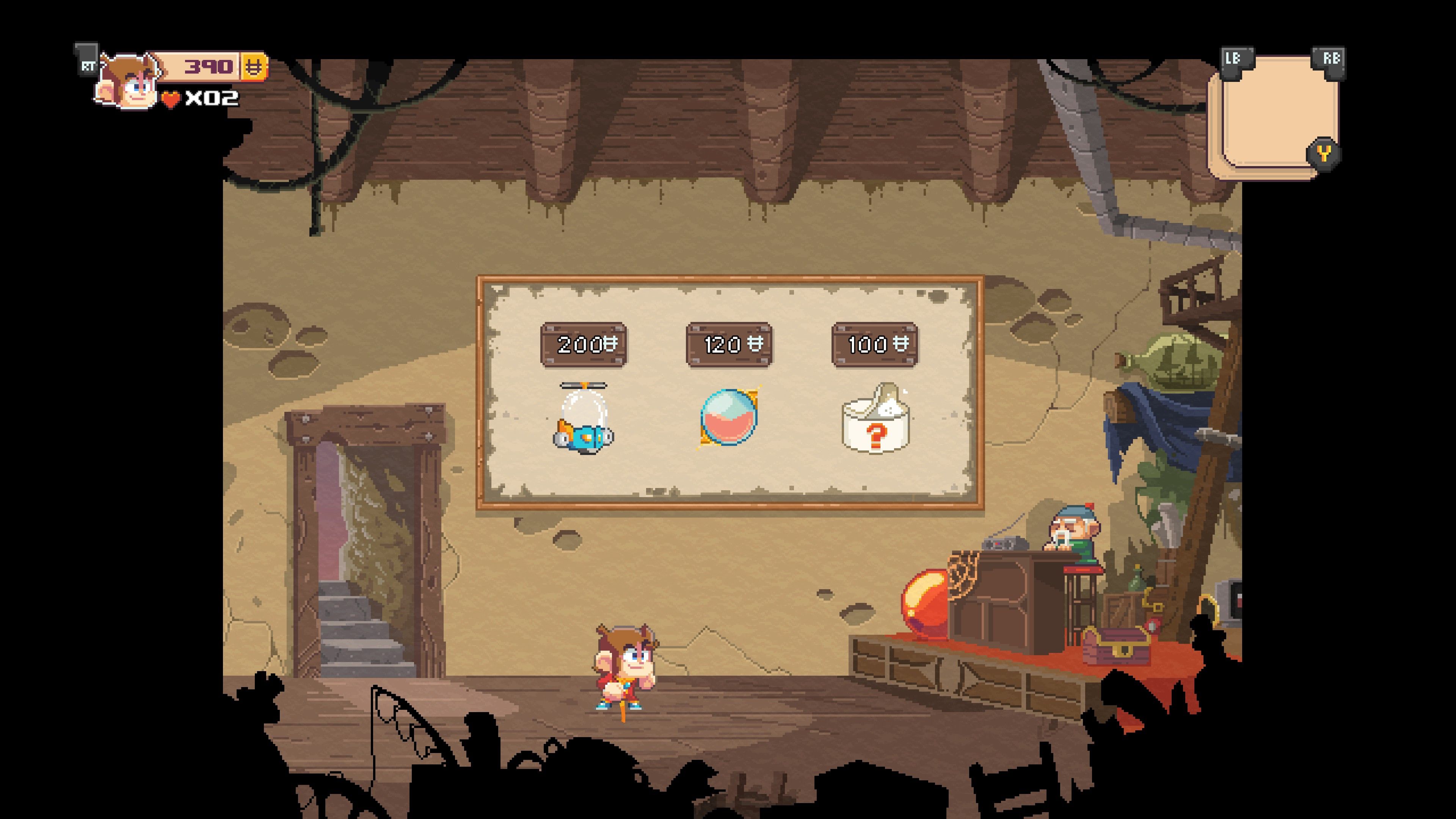 On the flip side of that coin is also a negative: this is quite literally the same exact game as released in 1986. 35 years of advancements in platforming design have left Alex Kidd in a strange position. I do feel that Miracle World, the very first instalment of Sega’s previous mascot series, is still a decent enough game. I mostly just don’t know how to parse the sometimes-slippery controls and basic level design.

Just like the Wonder Boy remake, a quick press of a button lets you flip back to the original visuals and it reveals the magic behind Miracle World DX. There are a few changes with enemy placement from the original in an attempt to make things slightly easier, but nothing has been reworked when it comes to level design, pacing, or game feel. If you’re an avid fan of the original, you’re going to be surprised at just how faithful this remake is. If you grew up playing Super Mario Bros. instead, you’ll likely understand why Alex Kidd isn’t as widely known.

The plot of the game is a take on the old Chinese fable Journey to the West. Originally conceived as a Dragon Ball game, Sega had to change course when the company’s license expired. That led to the creation of Alex, a noble martial arts hero who is out on a quest to save his brother from the clutches of a villain named Janken the Great. Over the course of numerous levels, you’ll run, jump, punch, and occasionally fly random machines to stop monsters and save the kingdom of Radaxian. It’s basic but perfectly functional for a plot in an ’80s game. 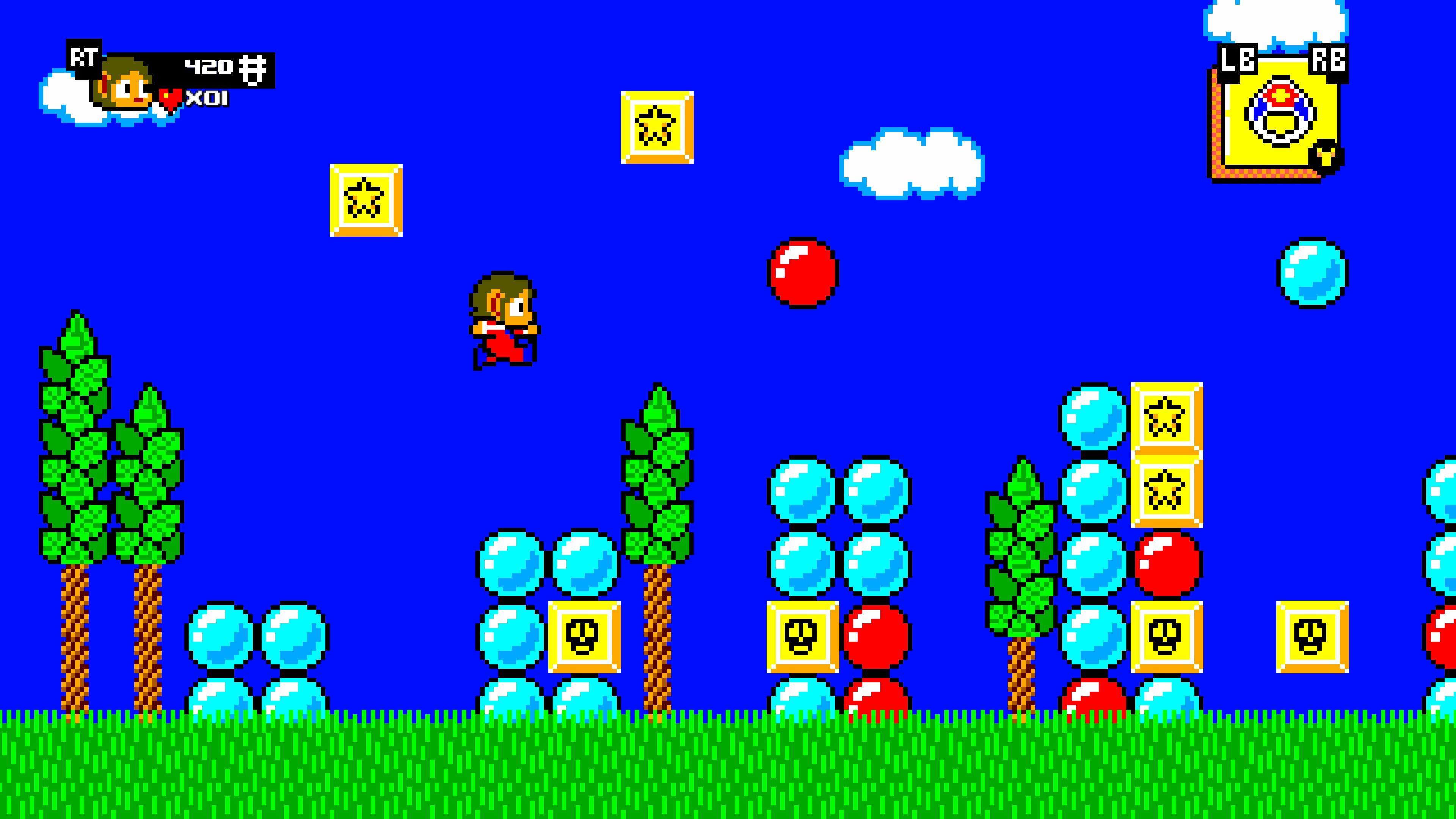 While some nice new cutscenes give a storybook feeling to the game, everything else remains the same. Levels can be completed in mere minutes, your moveset is incredibly limited, and you’ll often run directly into enemies due to the controls being so lightning fast. Alex has places to be, so he never slows down and that usually means you’ll either overshoot jumps or fail to stop in time.

In a welcome addition for newcomers, you don’t need to adhere to the old life system that the original Miracle World had. It is there for purists (and even unlocks a special achievement when completing the game), but an infinite lives option from the menu will let you respawn as many times as you need to complete levels. That’s great, especially since you can burn through your starting three lives in less than a minute until you get the hang of the controls.

Despite how outdated things can feel, it is entirely possible to beat levels with the old system. For the purposes of this demo, I tried both methods and wasn’t frustrated by having only three lives. You can collect coins in levels and use them at shops to buy some extra lives, along with finding them in special boxes during levels. That doesn’t really matter as you have infinite continues, but it’s certainly better than only getting three shots. 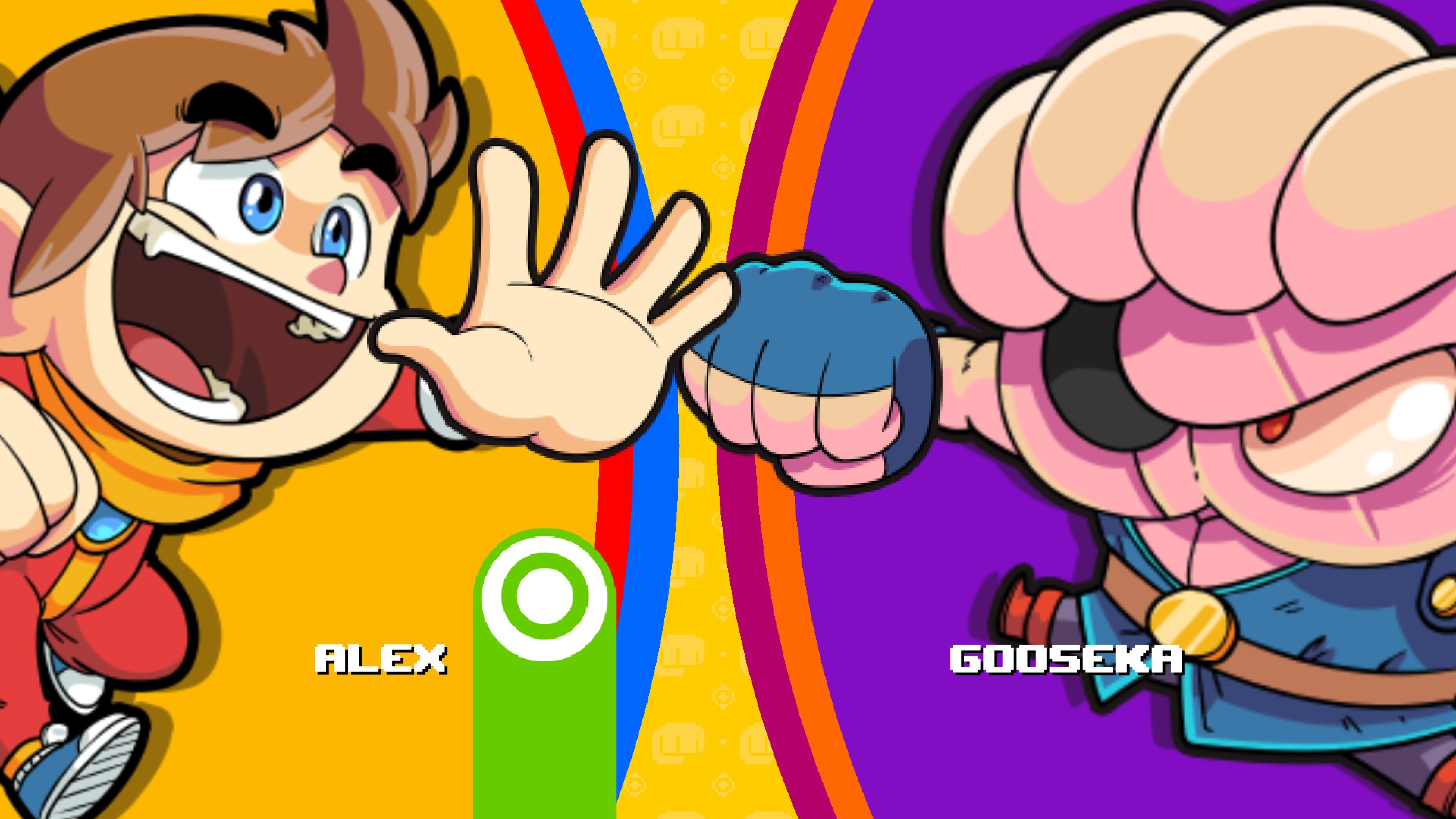 Where these lives start to feel limiting is with boss encounters. In staying true to the original, Alex will engage in battles of Jan-Ken-Pon (a.k.a. Rock-Paper-Scissors) with end-level foes and this is where things quickly turn sour. I can deal with overcoming physical obstacles and enemies that I need to punch. That is a test of my own skill and memorization. Losing to a boss because I couldn’t guess whether or not he would pick paper is frustrating in the extreme.

There is an item that will let you gaze into the boss’s mind, but using a continue removes that from your inventory, so you’re going to die a lot in this game. Just to beat the first level I needed to continue twice, but that item does stay in your inventory with infinite lives. I suppose that would lessen the pain, though I’m something of a masochist.

The other levels in this preview were cut from the same cloth as the original, just that there are shops available at the start. In level two, you can buy a bike for $200 and breeze through the level in a minute. It almost feels like cheating, but then Miracle World doesn’t have any issue with destroying your soul. What mainly changes are the backgrounds, as well as some new obstacles slowly getting introduced. 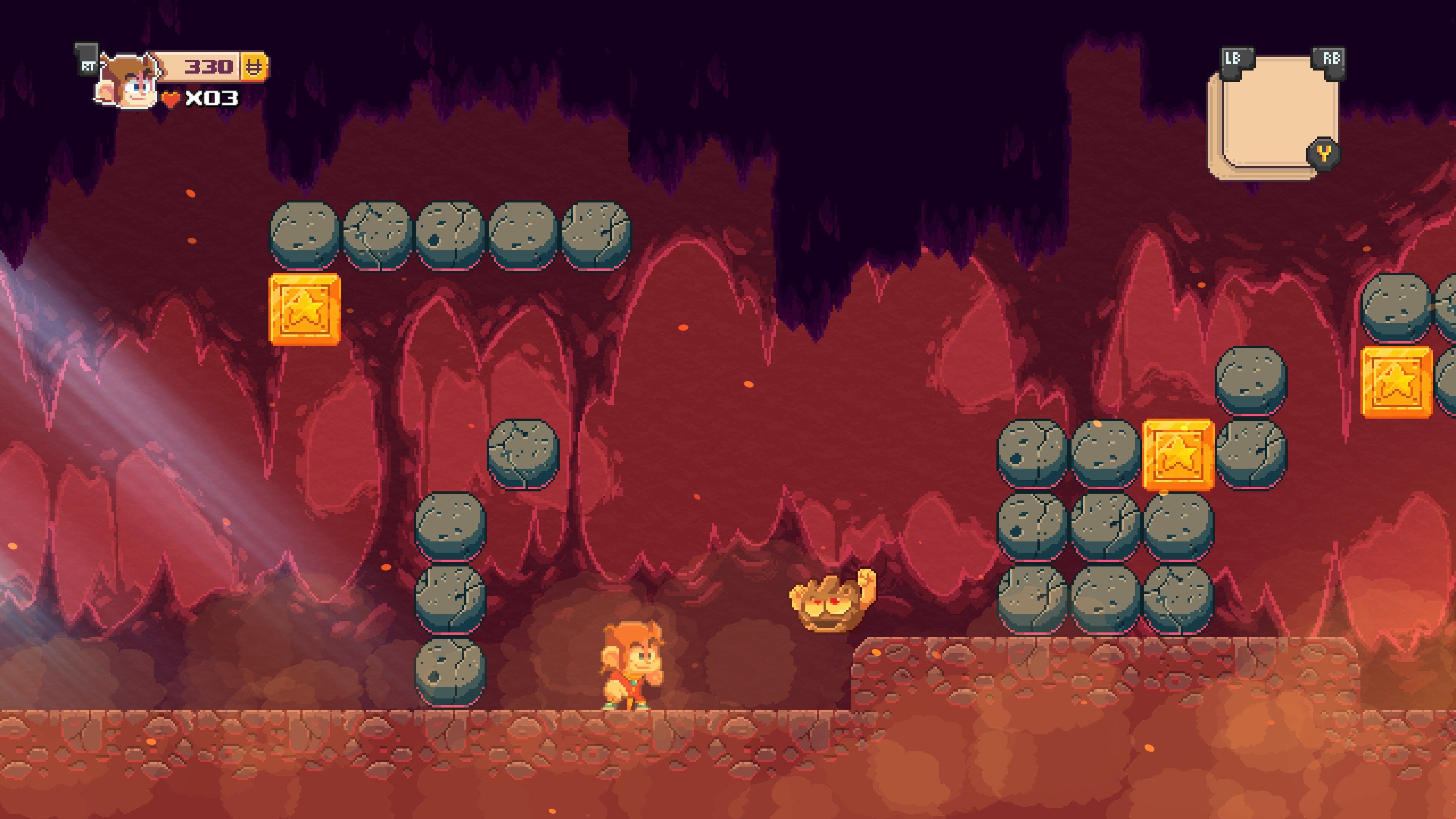 All of that said, I’m not quite sure where this leaves Alex Kidd in Miracle World DX. Much like the recent release of both Famicom Detective Club games, I appreciate what Jankenteam is doing by restoring a classic that a lot of players may have never experienced. At the same time, it wouldn’t hurt to update the controls a bit or even expand on some of the concepts from the original to create a more unique experience.

There’s something to be said of preservation taking priority in the games industry, especially since most publishers would rather forget the past. I like that I can now play the first Alex Kidd on a modern platform in glorious 4K, but I don’t know if many players will feel the same way. This one definitely feels like a game for the fans, but maybe there are some truly showstopping levels later on. That’s all I can hope for.