You are here:
Home / Actually, The Bug That Made Gandhi Drop Nukes In Civilization Is Just A Myth

Actually, The Bug That Made Gandhi Drop Nukes In Civilization Is Just A Myth

Years ago, a rumor went around that a bug in the first Civilization game caused Mahatma Gandhi to become incredibly aggressive — specifically, he was one of the most likely leaders in the game to drop nuclear bombs. This was obviously strange — Gandhi was nominated for a Nobel Peace Prize on several occasions, and has become an icon of non-violent protest for successfully working towards Indian independence from British imperialist rule in the early 20th Century.

Why on earth was a man like this dropping so many nukes?

Sid Meier’s autobiography recently launched — we actually reviewed it, if you’re wondering about whether or not you should pick it up yourself — and shed some light on the situation. As well as offering a variety of insights into games development over the last couple of decades, Meier addressed the longstanding rumor mentioned above: that a bug in Civilization’s code inadvertently brought Nuclear Gandhi into the game. 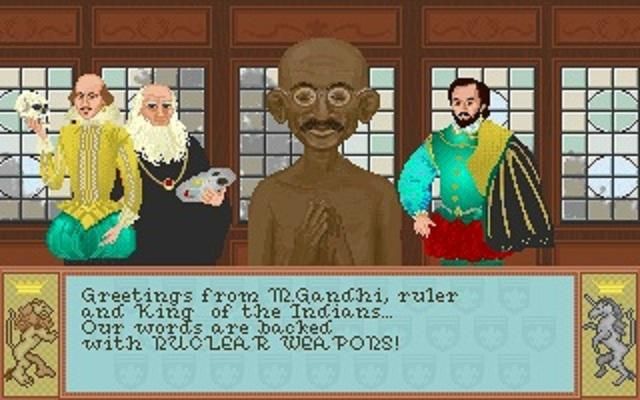 As you can see in the picture above, Gandhi wasn’t fucking around. “Greetings from M. Gandhi, ruler and King of the Indians,” he says. “Our words are backed with NUCLEAR WEAPONS!”

Now, Meier’s autobiography doesn’t pretend this didn’t happen. Between pages 262 and 265, he delves into why Gandhi was sometimes willing to make such violent threats. On one hand, every leader in the game needed their AI to eventually acknowledge that war was a possibility. On the other, Gandhi was such a pacifist leader that the Cold War approach of “we have nukes, too!” was often paradoxically used to avert unnecessary conflict.

But on top of that, the bug simply never existed.

According to Meier’s autobiography, a forum user named Tunafish claimed that Gandhi’s affinity for nukes came from an overflow error. Every leader in Civ is assigned an aggression rating between 1 and 12. Gandhi’s was 1, but get this: whenever a country adopted democracy, its leader’s aggression rating automatically went down by two points. Because there was no way of reading a value for -1, Gandhi ended up going to zero, and then to the opposite end of the spectrum, boasting an aggression rating of 255.

But again, this never happened. This purported “overflow error” was fabricated by an internet troll who was annoyed that Gandhi nuked them. As means of venting, or simply seeing how far they could spin a joke on the matter, they made up a reason and shared it online. It went unnoticed for a while, but then the memes started to show up. Then it was absorbed by the news cycle. And before anyone knew what was happening, Nuclear Gandhi was a thing. 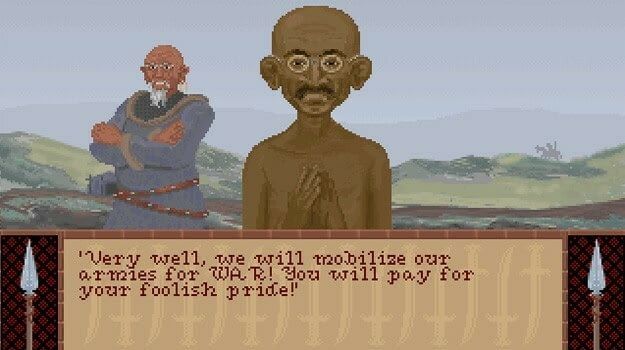 “It’s not the countless callbacks and references that make the nuclear Gandhi story so funny to me,” Meier writes. “It’s the fact that none of it is true. The overflow error never happened at all.”

As a matter of fact, a numeric bug of that nature comes from something called “unsigned characters,” which aren’t even a thing in the C programming language. Tunafish had some knowledge of programming, sure — but given that Civ and Civ 2 were scripted in C and C++, respectively, Gandhi’s military aggression rating remained at 1 throughout the entire game, regardless of any decreases that affected other leaders after they adopted democracy.

So there you have it. The Nuclear Gandhi bug that’s been doing the rounds on the internet for almost a decade is nothing but a big, fat lie. That doesn’t make it less funny, though, and Meier himself is the first person to acknowledge that.

“Gandhi firing nukes is, and always has been, inherently funny, no matter how rarely it occurs,” he writes.

“I’ve certainly released my fair share of bugs, even if this doesn’t happen to be one of them, and I’m glad to see players engage with the game, and each other, in whatever way makes them happy.”

Read next: Naoki Yoshida Says He Would Love To Do A Final Fantasy 14 Crossover With Diablo Or World Of Warcraft