You are here:
Home / A Plague Tale: Requiem: Tales And Revelations Walkthrough

Amicia and Hugo de Rune have faced plenty of dangers throughout their young lives but the stakes remain high in A Plague Tale: Requiem. Now on the run from the Order, the siblings are on their own after being separated from their mother and are searching for a possible cure for Hugo.

Finally arriving on La Cuna, the island that appeared in Hugo’s dreams, the children are welcomed onto the island with open arms. After a brief misunderstanding, Amicia and Hugo are now honorary guests of the Count and Countess. Follow this guide as you explore the massive island of La Cuna in the ninth chapter of the game – Tales and Revelations. 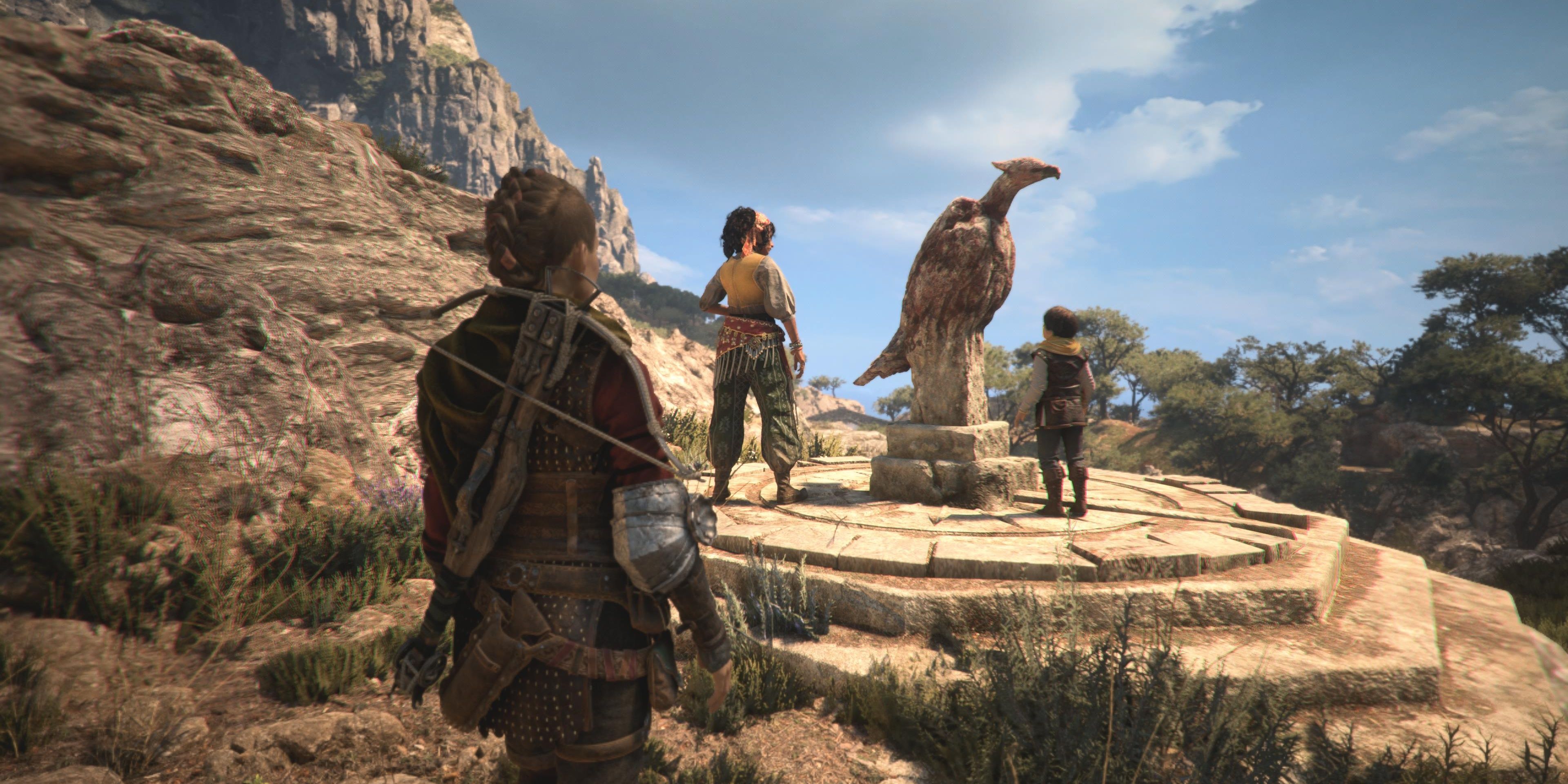 Once you’re fully rested, exit your living quarters and leave the palace. Head down the many steps until you reach the guard at the door who allows the children to leave the grounds. La Cuna is the largest open area in the game, so there’s plenty to find, but it's also quite easy to get lost.

There isn’t anything at the end of the path to the left, so instead, run down the steps in front of you to find a phoenix statue. The main objective is to follow the gaze of the phoenixes and see what exactly they lead to. After finding the second statue, head up to the home to the left and find a workbench to upgrade your equipment. Continue to run around the house to find Pieces, then double back to check out the house on the other side of the path. 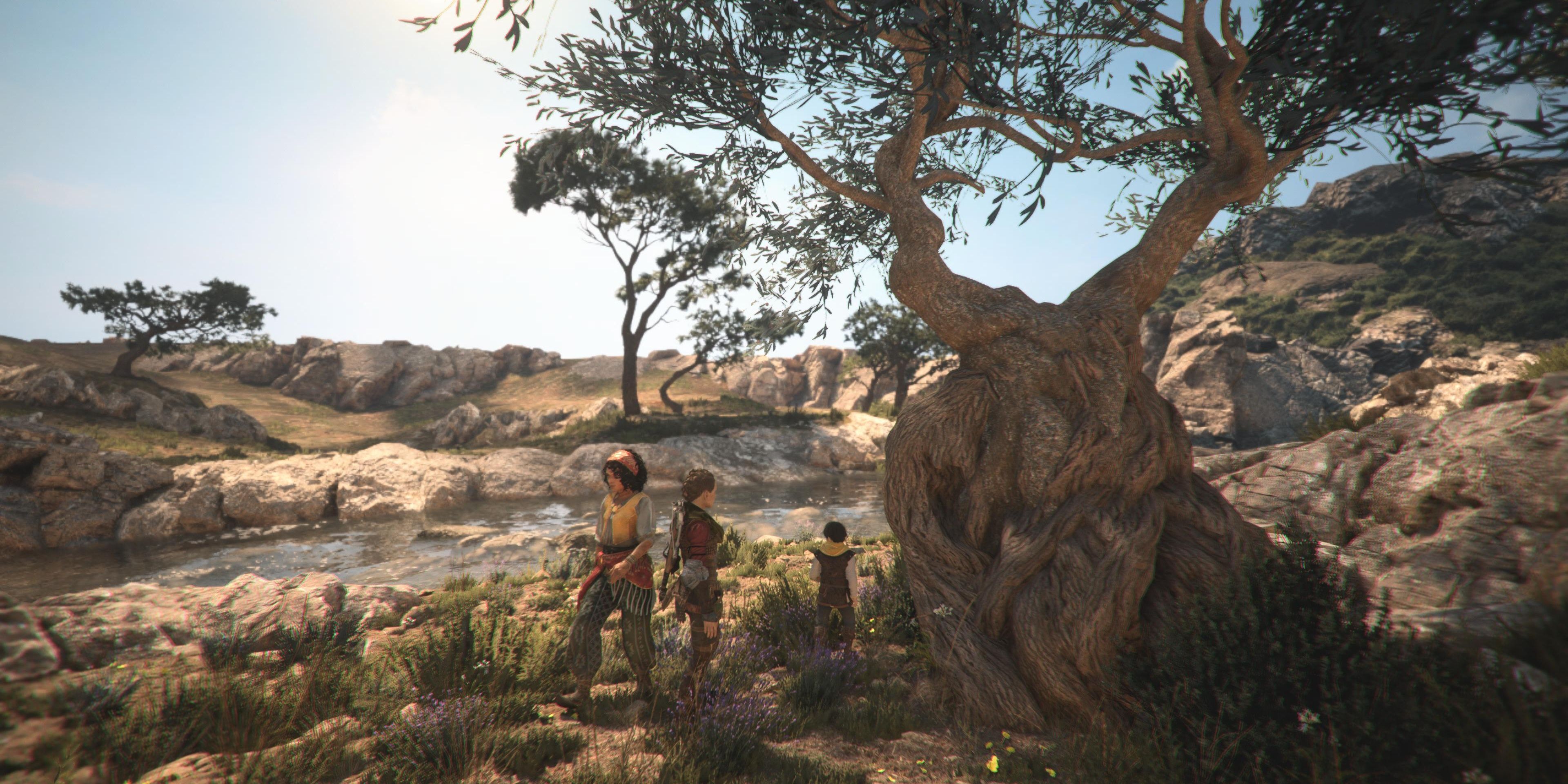 Run past the people sowing the ground, and you’ll find an old tree, unlocking another souvenir. Return to the main path and continue following the phoenix statues toward the left. Near the cliff, climb up the ladder of the large barn. Keep climbing to the roof to peer through the hole and shoot the latch. Drop from the roof and shoot the latch through the window that’s locking the side door. You’ll find a chest with Pieces, a Tool, and Sulphur in the barn, along with another workbench. 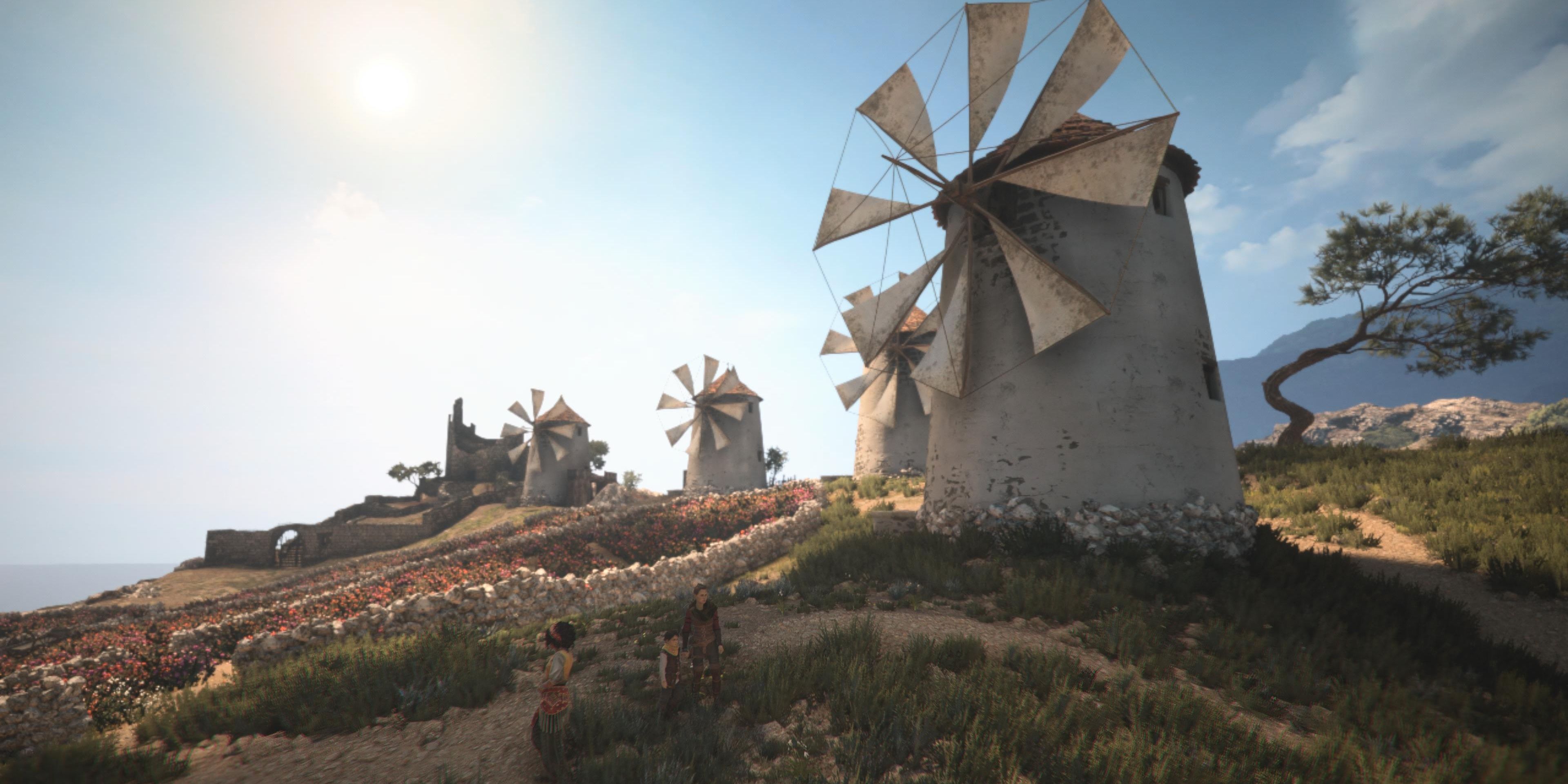 Before you continue heading down the path following the phoenix statues, double back and head toward the left. You'll see four windmills up the hill. There's a puzzle associated with the windmills, and if you activate and deactivate the correct ones, a hidden passage will open down the path behind the second windmill. There are four stone tablets scattered around the island with Roman numeral markings that will tell you which windmills need to be activated. To spare you the time in finding them, the correct activation order is the first two windmills are turned off, and the last two windmills are turned on​​​​​​. 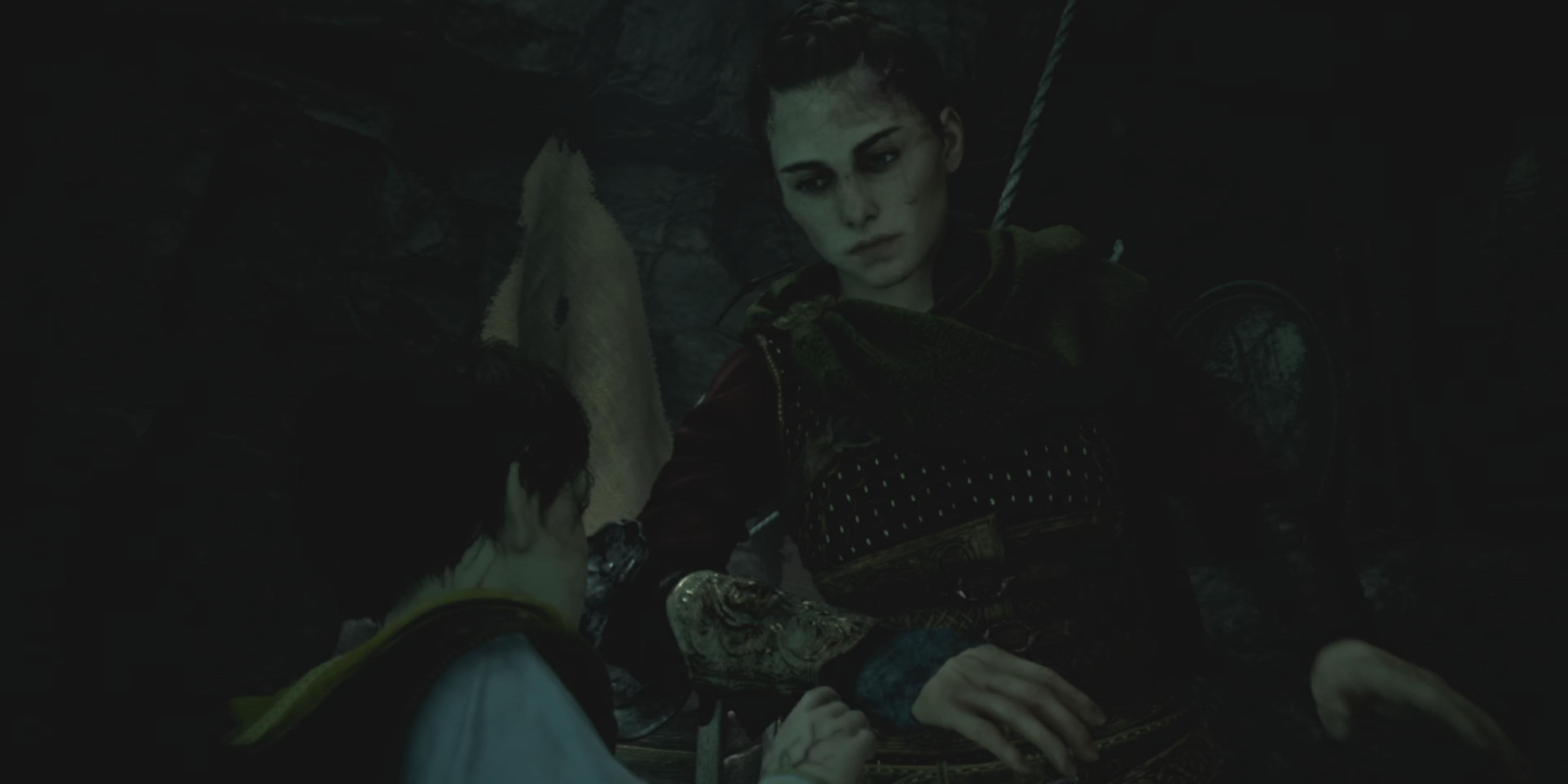 Once you activate and deactivate the windmills, you'll feel a tremendous rumbling. Run down the path behind the second mill and turn right to see an opening with a ladder leading down. Climb down the ladder and keep moving forward on the path.

Eventually, you'll find a smuggler's lair with two chests of Pieces, Tools, and alchemical resources, but the real reward is the Bracer. This item allows Amicia to recover faster when hit by enemies, a useful accessory to have for the remainder of the game. 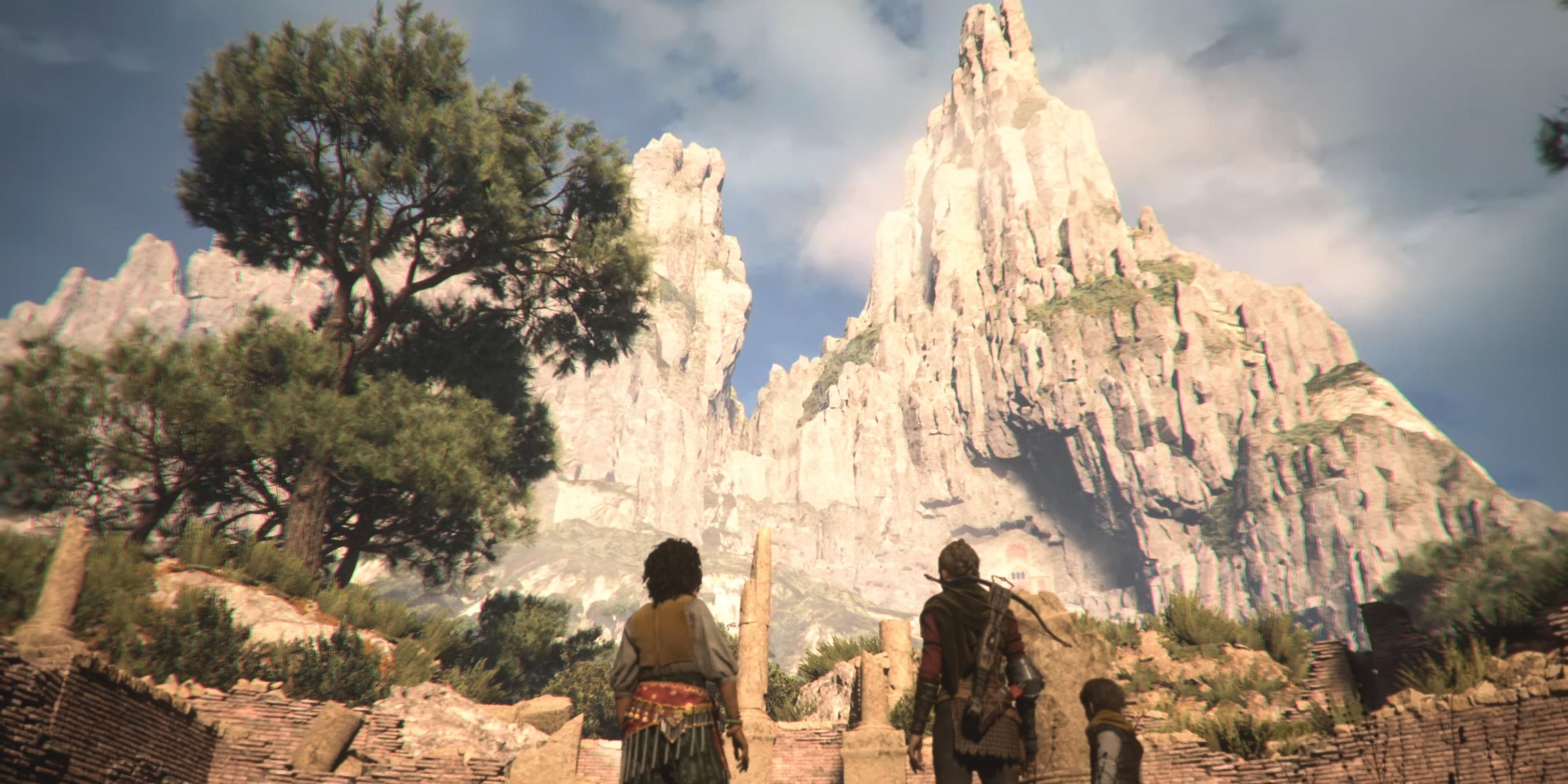 Continue running down the path past the giant, decorated tree. When you reach the shops, you won’t be able to progress down the right path because it’ll lead back to the harbor. Instead, follow the phoenix's gaze to the left and lift the wooden barrier to go through the narrow passage to reach the ruins. Walk to the left and drop from the ledge to open a chest with Alcohol and Sulphur. Use an Ignifer pot to burn the tall grass to reveal the full image underneath. 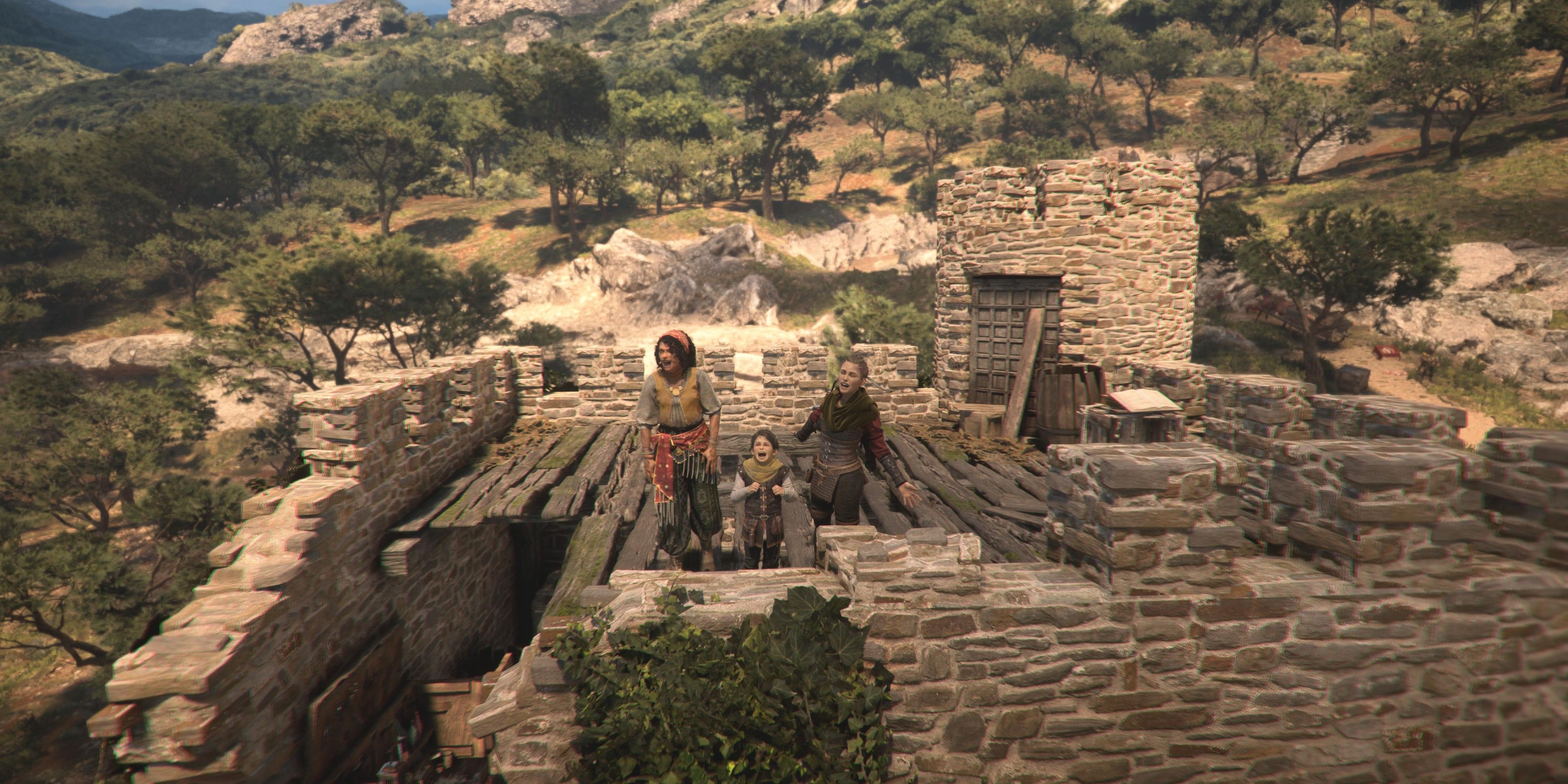 Keep running up the path and take a slight right to find a small camp with a chest that has Sulphur. Run past the beehives and up the mountain path until you reach a gate. Passing through the gate will lock you out of the area, so only proceed if you’re ready to advance the game. After the cutscene, continue heading toward the sanctuary to find a fountain. Search the nearby chest for Saltpeter, then arrive at another gate that’s blocked by a herd of goats.

Take advantage of not being in combat during this chapter and craft as much alchemical ammo as possible. 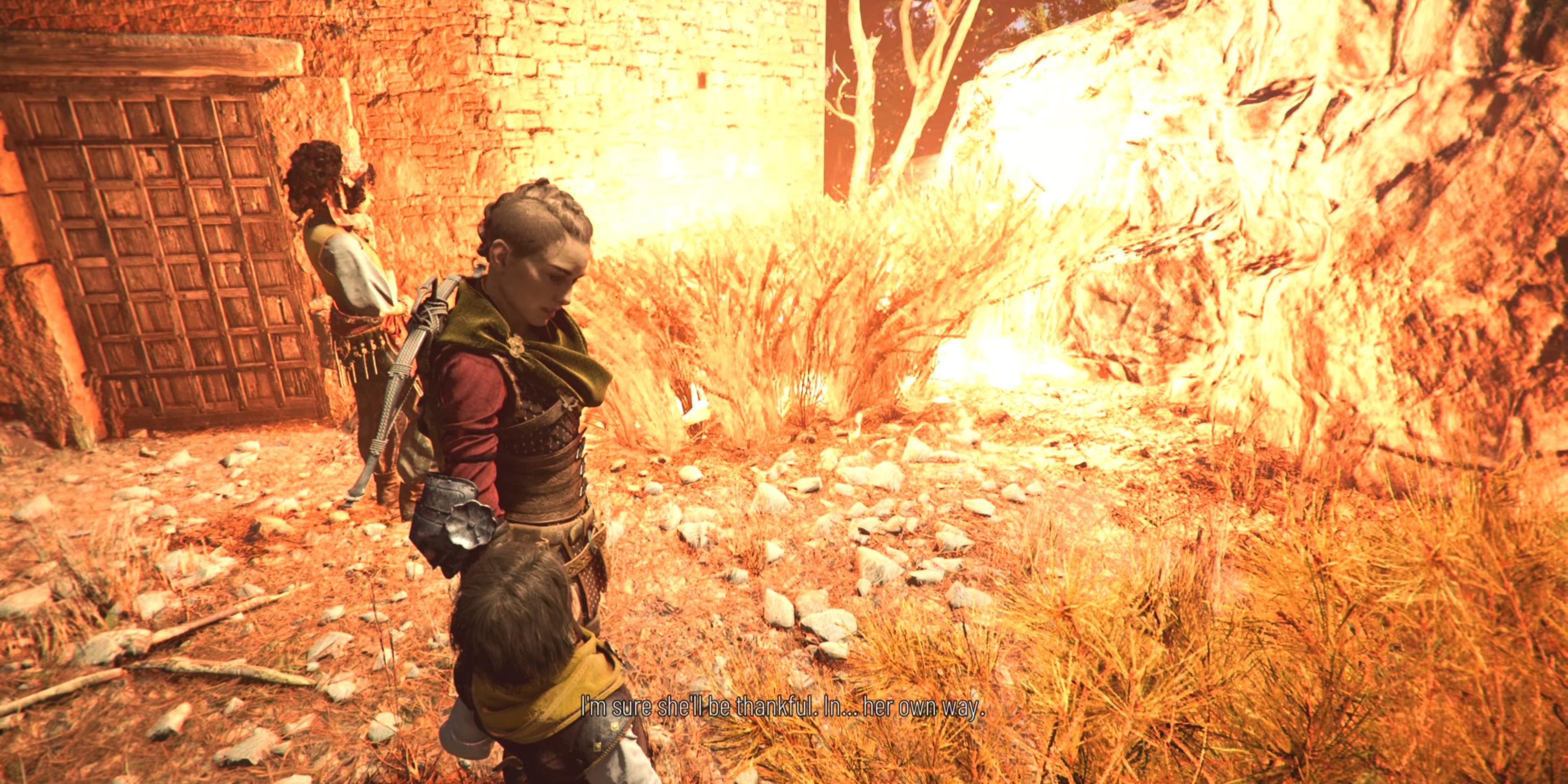 Take the secret side path to the left and climb up the ledge. You’ll reach a partially destroyed tower and hear the sound of the lost goat, but the door is locked. Search the chest nearby for Alcohol and Sulphur, then burn the tall grass on the right side of the door to reveal a hole in the wall. Send Hugo through the hole to unlock the door, allowing you to complete the goat souvenir and find a chest with Pieces, a Tool, and Alcohol.

Use the Photo Mode to zoom the camera out to see a wide view of the area, allowing you to strategically plan on how to avoid the guards. 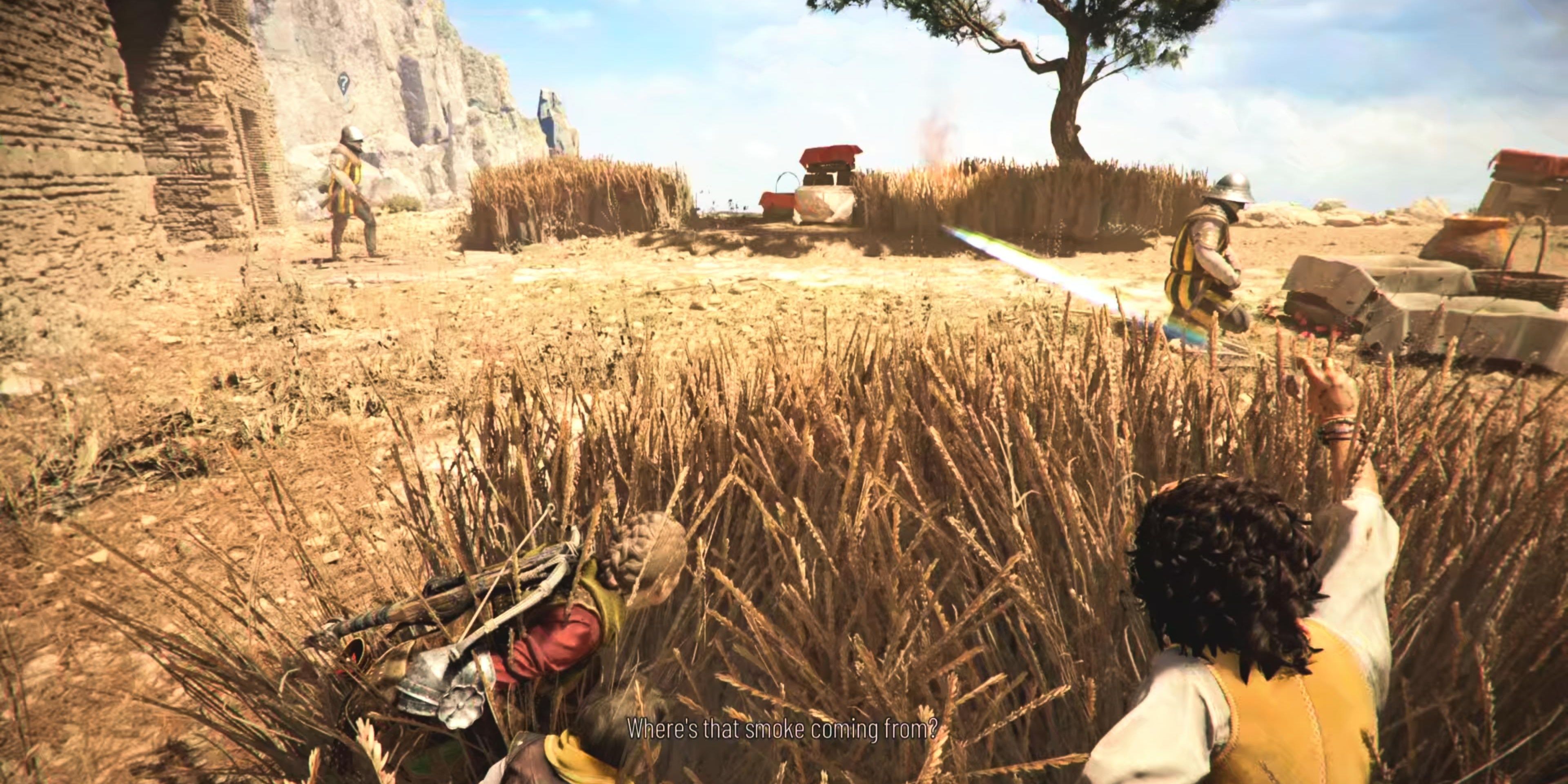 Leave the tower and climb up the ledge to continue toward the sanctuary. Once you drop down from the ledge, you’ll now be in a forbidden area. Sophia’s companion ability is unlocked, allowing her to use a special prism that reflects sunlight and causes tall grass to catch fire and distract guards. Utilize Sophia’s prism and the toolboxes in the area to safely avoid the guards and reach the door.

If you use Sophia’s prism too many times, the guards will become suspicious and go on high alert. 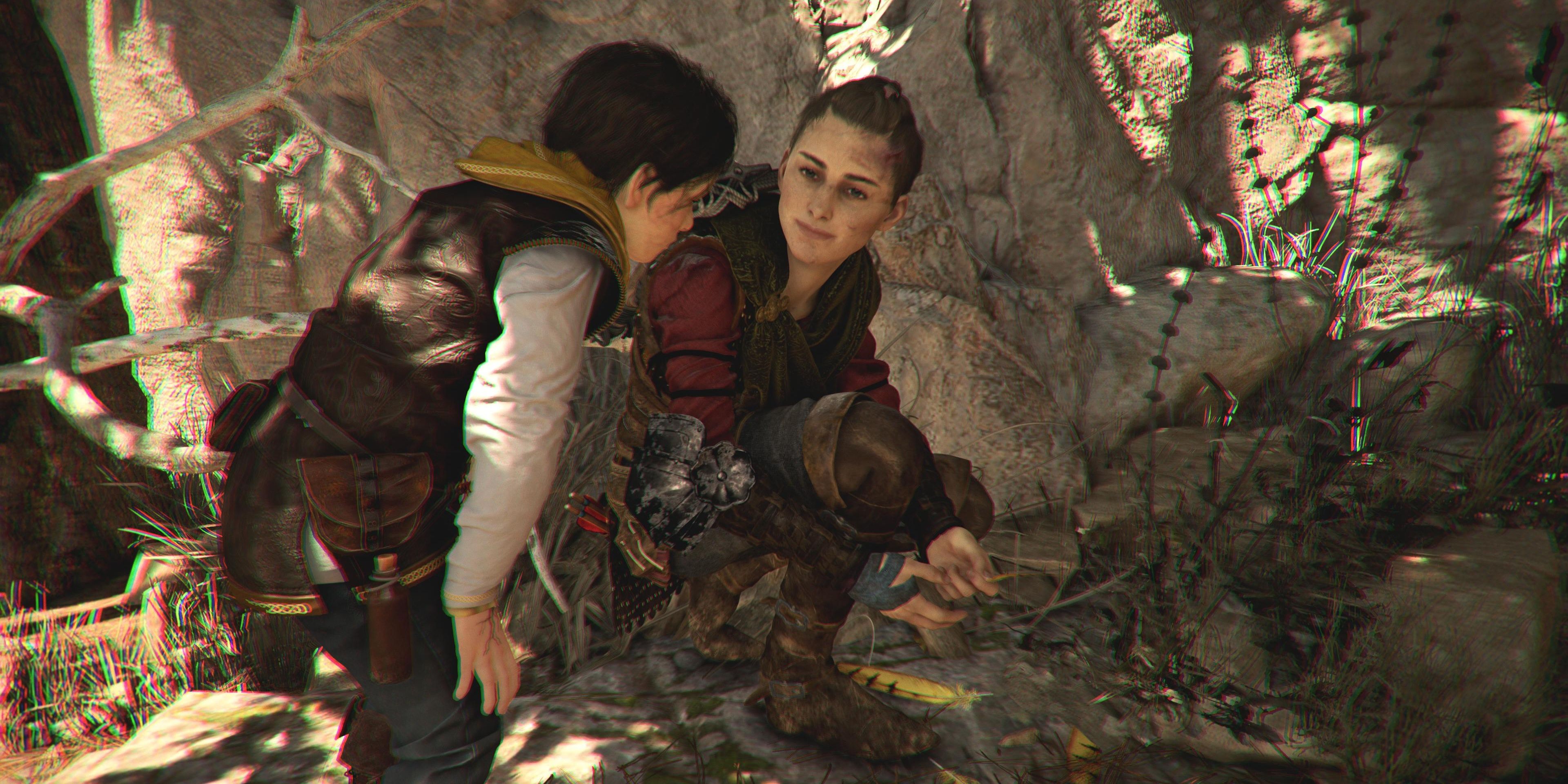 Enter the room on the left to search the chest for Resin and use the workbench. Carefully walk on the edge of the castle wall and run up ahead through the flowery archways. There are more guards in this area, so be prepared to use Sophia’s prism. Head to the left and light the tall grass behind you, so the armored soldier investigates it. Crouch behind him and head upwards to the next patch of tall grass. 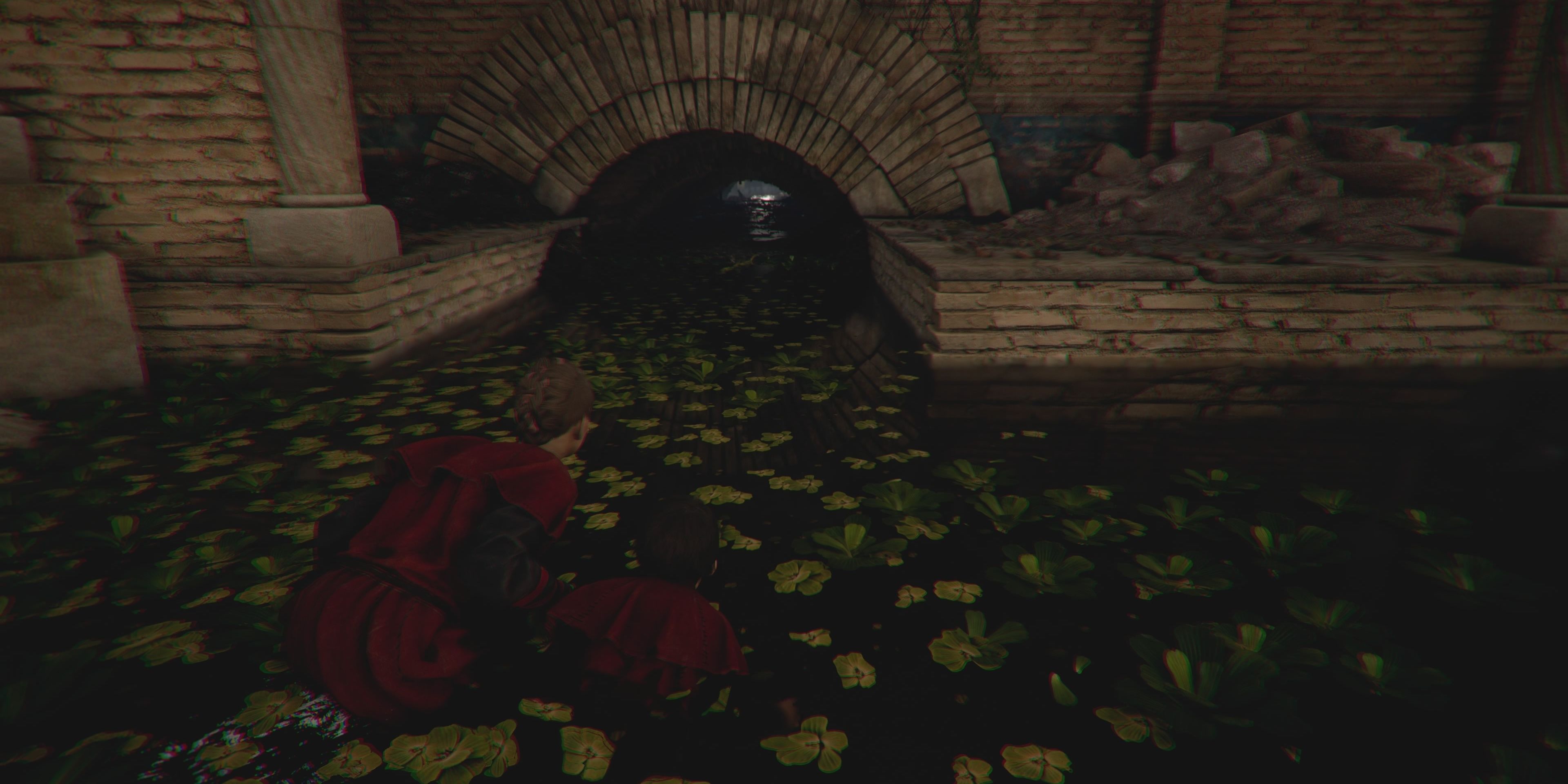 In their disguises, follow the islanders into the temple. After listening to Victor and Emilie, carry the torch through the waterfall and continue walking through the darkness. Once you complete the ceremony, sneak out the back with Sophia. Following the cutscene outside, explore the sacred chambers until Sophia calls you from above.

Climb through the hidden opening behind the hanging sheet and walk up the steps to speak with Sophia. The Count and Countess will arrive in the courtyard, so now it’s time to leave. Climb over the barrier and head to the other end of the pathway. Crawl underneath the large wood pallets and drop down from the ledge to quietly sneak into the sewer. Continue walking through the muddy water until you reach the exit and wrap up the chapter.