Following the defeat of Nicholas and the Inquisition, Amicia and Hugo de Rune tried living peacefully. However, the Macula in his blood started acting up, and the children must face new dangers in A Plague Tale: Requiem.

With the rats consuming La Cuna, Amicia and Hugo leave the island after rescuing Arnaud. Unfortunately, the Count attacked them at sea and managed to kidnap Hugo. Dying Sun is the fifteenth chapter of the game and features the final battle against Victor. Follow this guide in vanquishing the Count and completing this chapter. 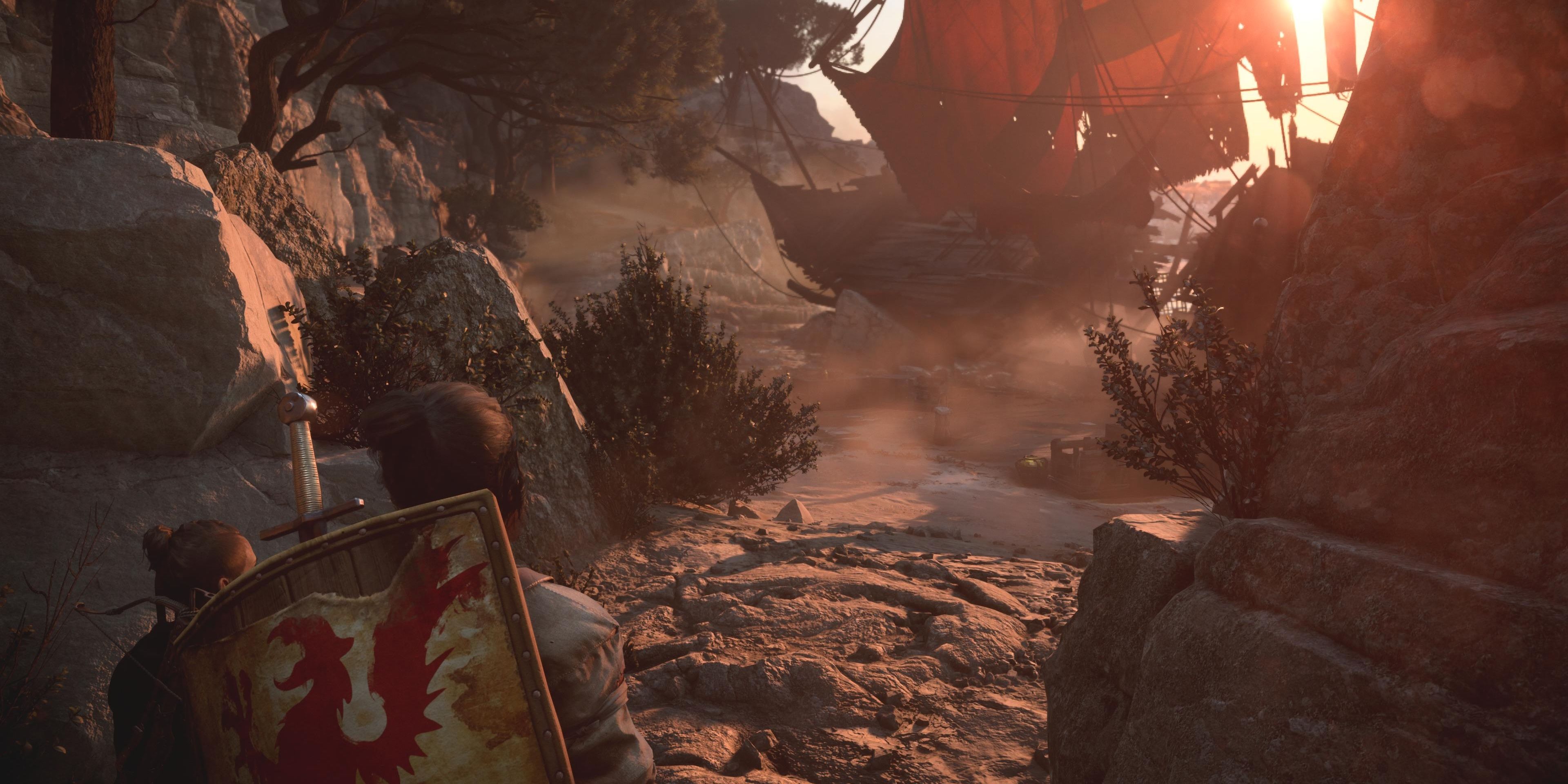 Once Amicia's woken up, head toward the ship wreckage down the coast and there will be a narrow passage at the end of the path. Before you continue going forward, make sure you craft as many alchemical projectiles as possible. Going through the passage will trigger the final fight against Victor, and you’ll want to be prepared. 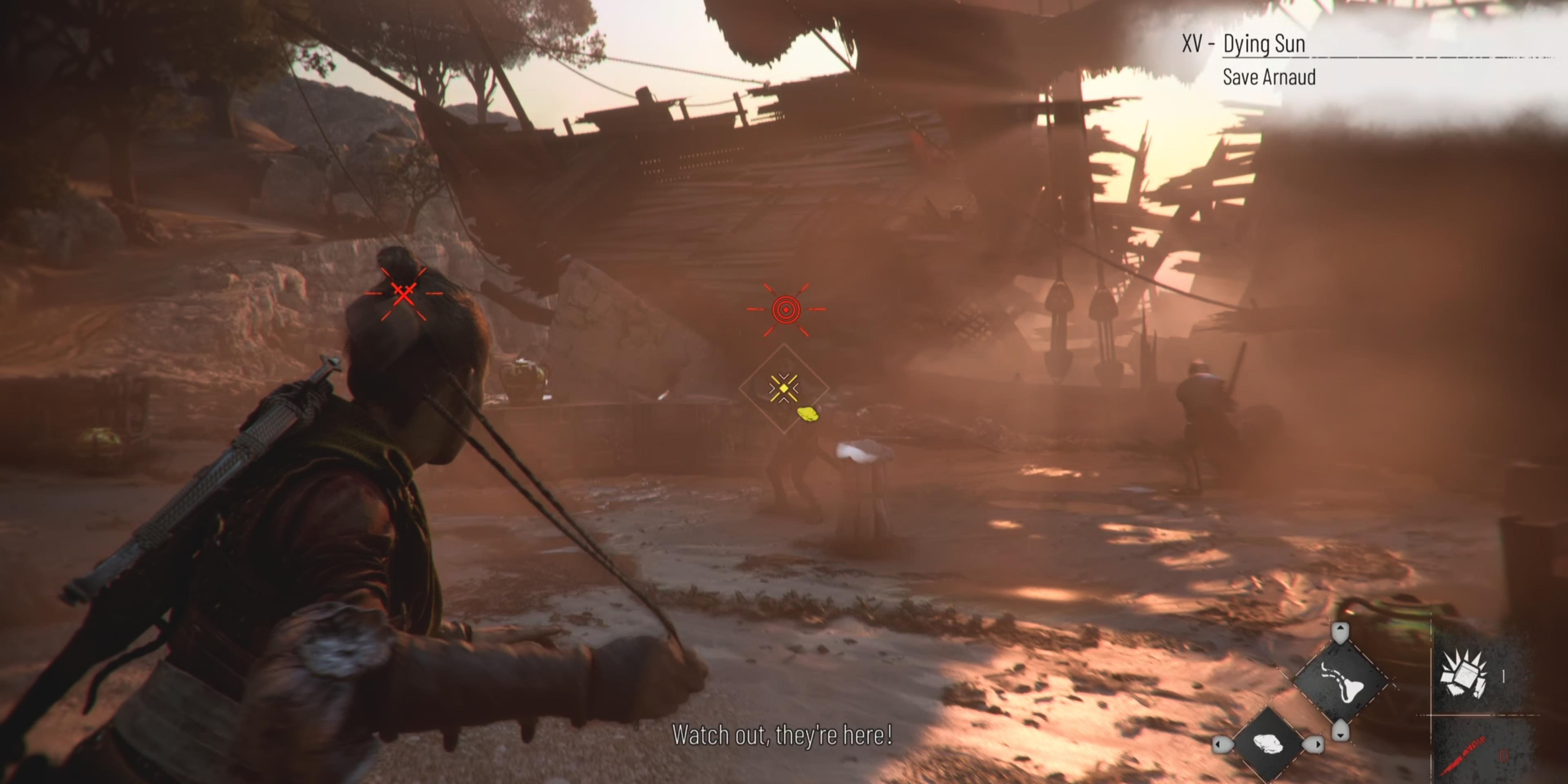 Once the cutscene finishes, Arnaud will focus on fighting Victor, while Amicia will take care of the surrounding soldiers. There are plenty of alchemical resources to craft ammo around the area, as well as bolts and pots that will respawn, and bigger jars of tar. Shoot the jars to spill tar on the ground, then use Ignifer on the area to burn soldiers stuck in the tar.

Amicia’s Reinforced Bolts upgrade on her Crossbow allows her to pick up used bolts from the enemy's bodies.

You’ll be attacked by a variety of soldiers, so utilize all of Amicia’s skills and weapons to survive. Hit the unarmored guards with her Sling and save the Crossbow bolts for helmeted and fully armored soldiers. Archers will appear on high rock ledges, so be mindful of arrows from above. 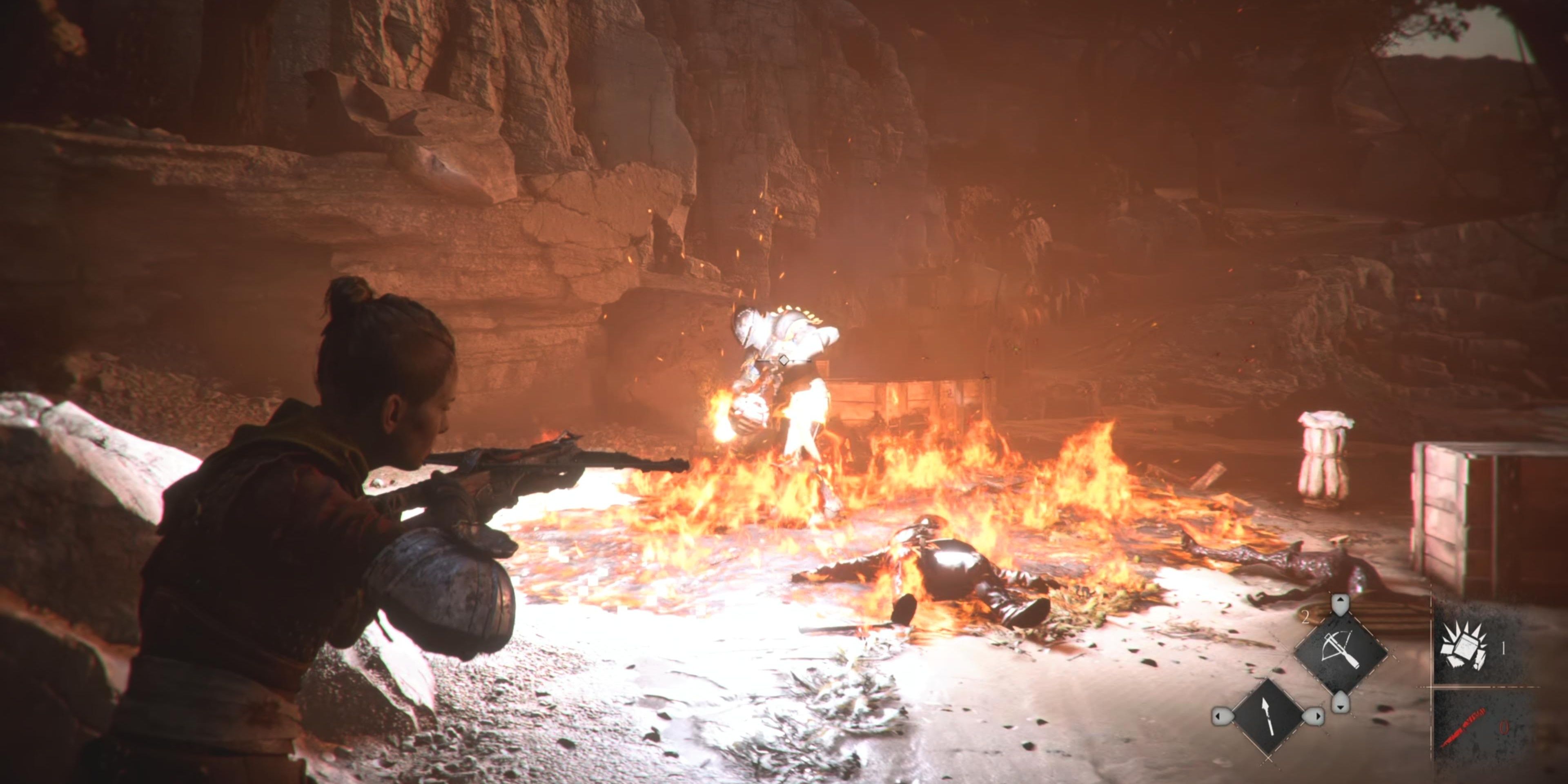 Throw pots of tar on the heavily armored soldiers to amplify the flames from their mace. While they’re burning, shoot them with bolts and your Sling to weaken their armor. A cutscene triggers after killing several soldiers, but it’ll be back to fighting when it’s done. 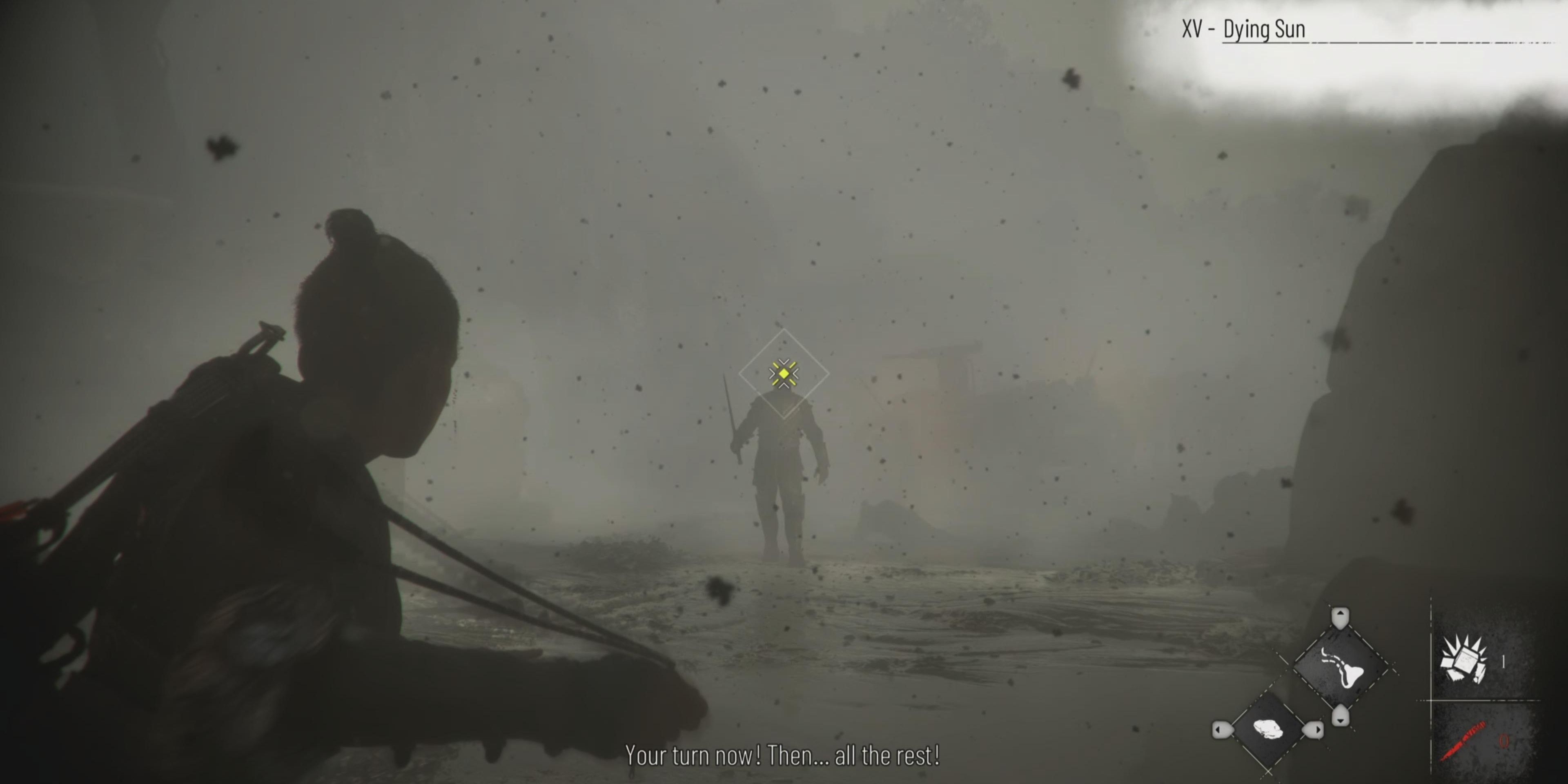 With limited visibility, quickly run to the left side to avoid the approaching soldier. Run to the crates near Arnaud to find a bolt and pots. The bolt and pots will continue to respawn, so return here to continue resupplying throughout the battle. After taking down several soldiers, Arnaud gives you the opportunity to kill Victor, then it’s off to Marseille. 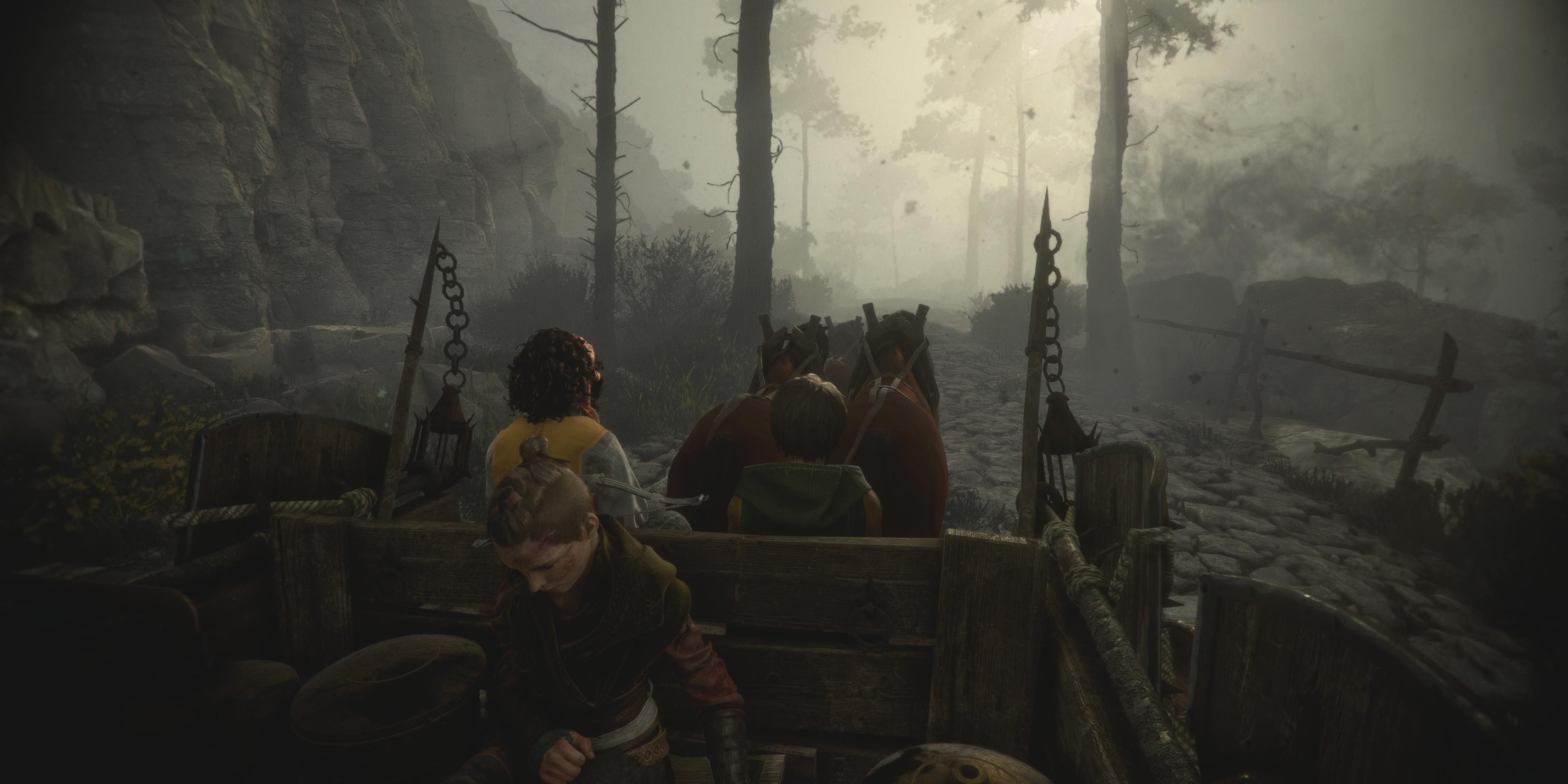 After freeing Sophia and Lucas, you all will be traveling toward Marseille in a wagon. The castle gates will be barricaded when you reach the end of the road, but Amicia operates the flamethrower on the back of the wagon, allowing you to shoot jets of Greek fire. Burn the bales of hay on the left, letting Sophia lead the horses down the side path. 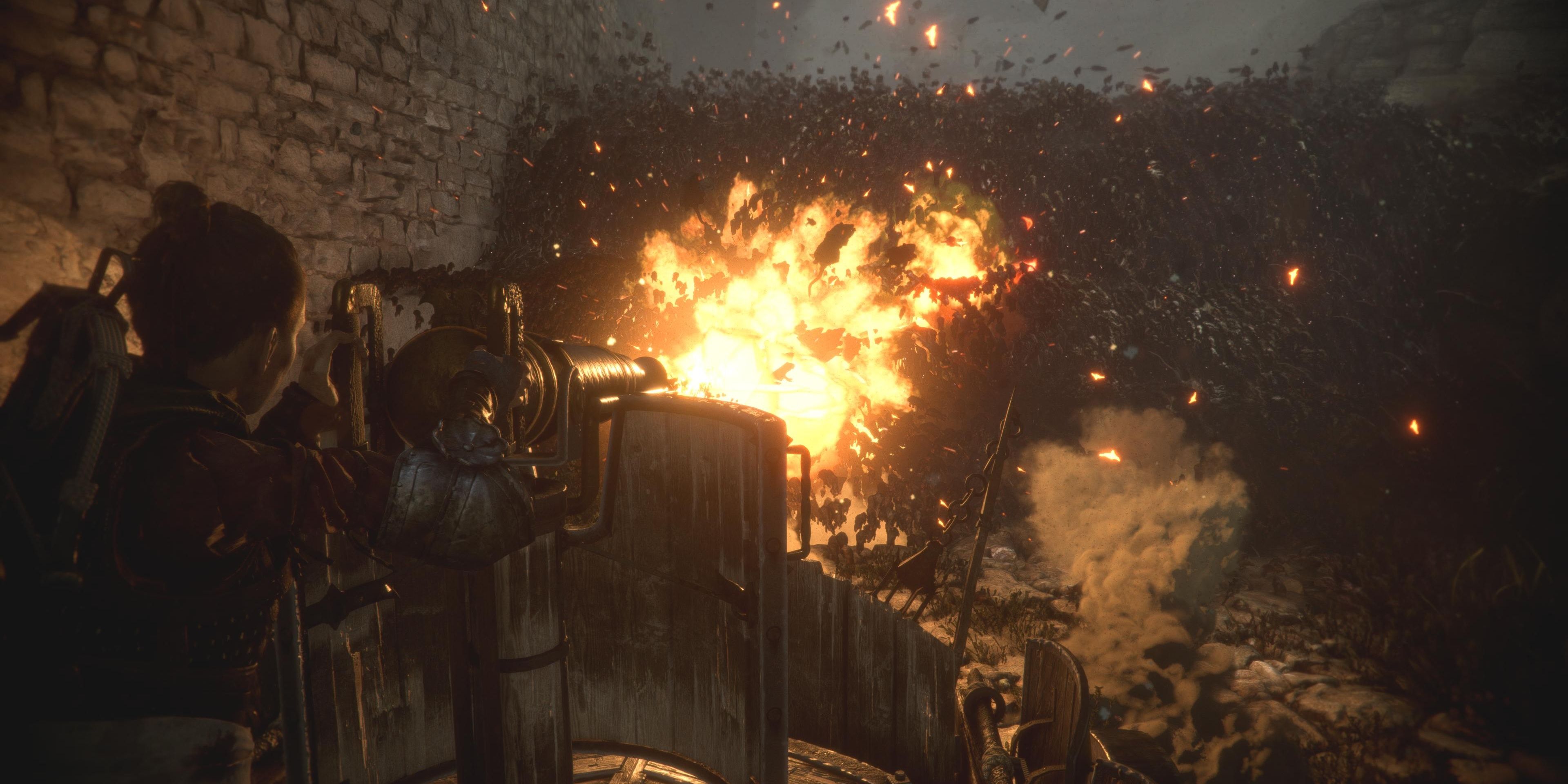 However, waves of rats will break from the castle walls, and you’ll need to use the Greek fire to keep the rats from consuming the wagon. The flames don’t have a cooldown or run out of fuel, so you can shoot continuous fire throughout this entire part. Keep shooting the flames to keep the rats at bay, until the wagon ultimately crashes, triggering the last cutscene before the end of the chapter.