You are here:
Home / 9 Best Characters In Rainbow Billy

Rainbow Billy: The Curse of the Leviathan is a game all about coming to terms with your problems and weaknesses and working through them in a safe, healthy way. You might not get that impression at a glance, considering the pastel critters running all over the place, but the game is pretty forthcoming with what it's really trying to tell us.

Speaking of pastel critters, every character that Billy can recruit for their adventure has a life and story all their own. They've all struggled with something in their lives, but with the support of Billy and their friends, they resolve to better themselves and pursue happiness, and it's downright inspiring. 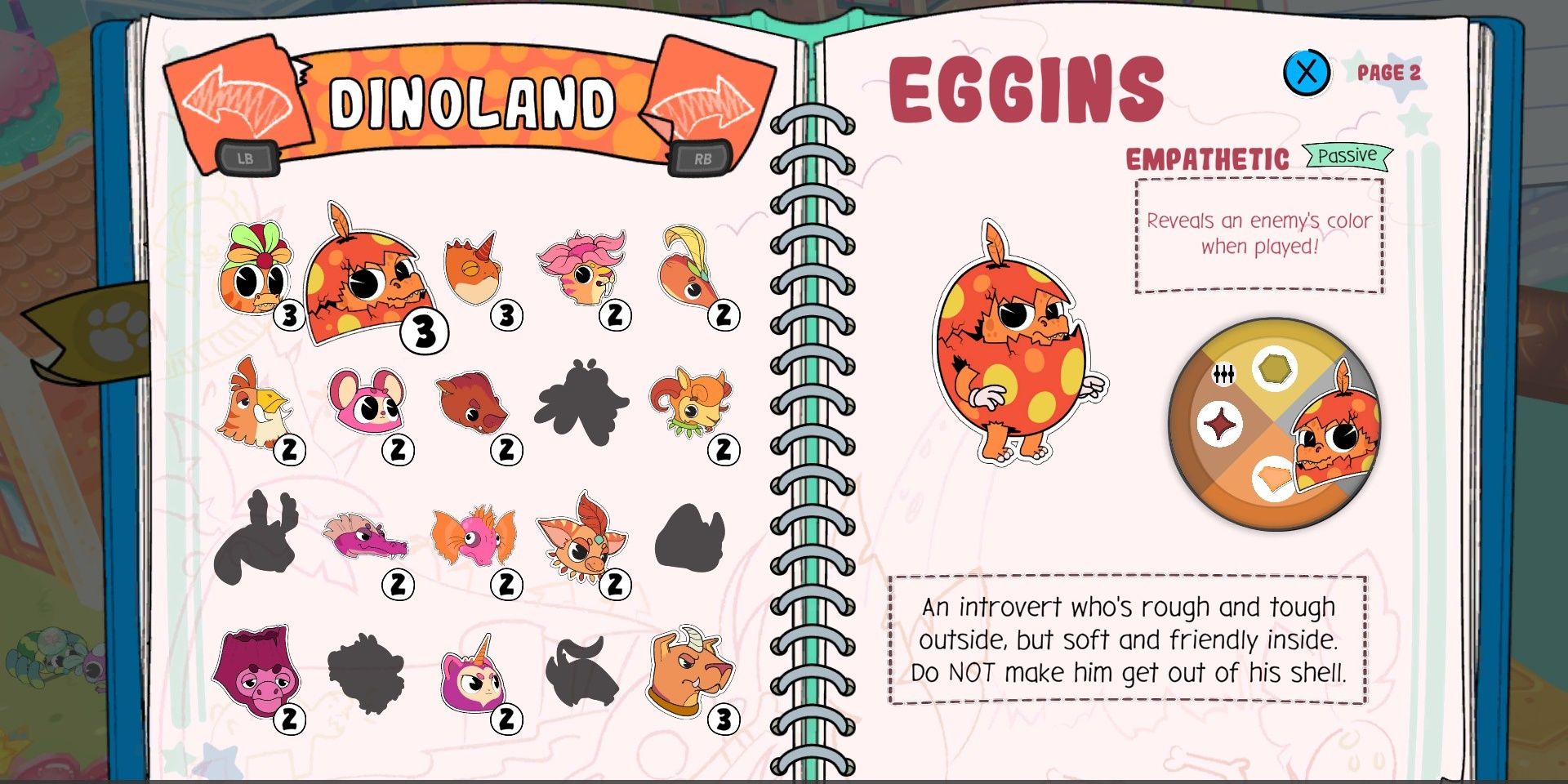 Eggins is an introvert with a capital I. When he was little, his family wasn't of the best means, and he felt like he was a burden to his struggling parents. As such, he chose to remain in his shell, quiet and out of the way so they wouldn't have as much to worry about.

The shell became a point of comfort for him, to the point that he gets upset if someone tries to force him to leave it. Eggins knows he'll have to leave the shell someday, but when he does, he wants it to be on his terms, when he's ready. 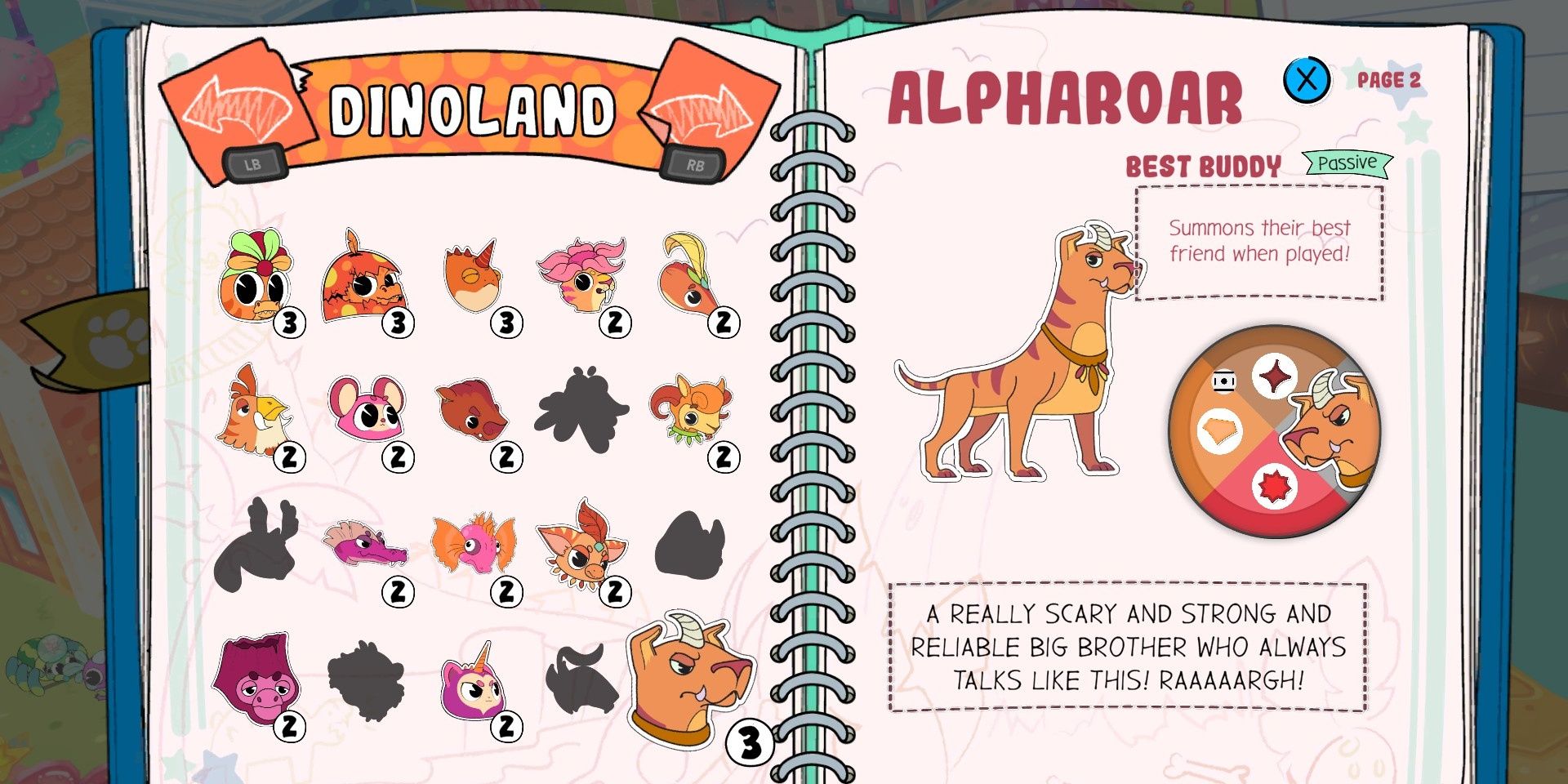 Alpharoar comes off as a loud and brash bully at first, but this is actually a deliberate persona he puts on. Well, the "bully" part is — he's just naturally loud. He was picked on frequently when he was growing up, and as his younger brother Bark started school, he was worried he would go through the same thing. So, he resolved to be an even bigger bully than those who picked on him to keep his brother safe.

It worked a little too well; Bark was safe, but he'd regularly get in big trouble, nearly to the point that Bark no longer felt he could be near him. Alpharoar realizes this after traveling with Billy, and resolves to be aggressively friendly instead of just aggressive, so he can be a good guy while still being strong. 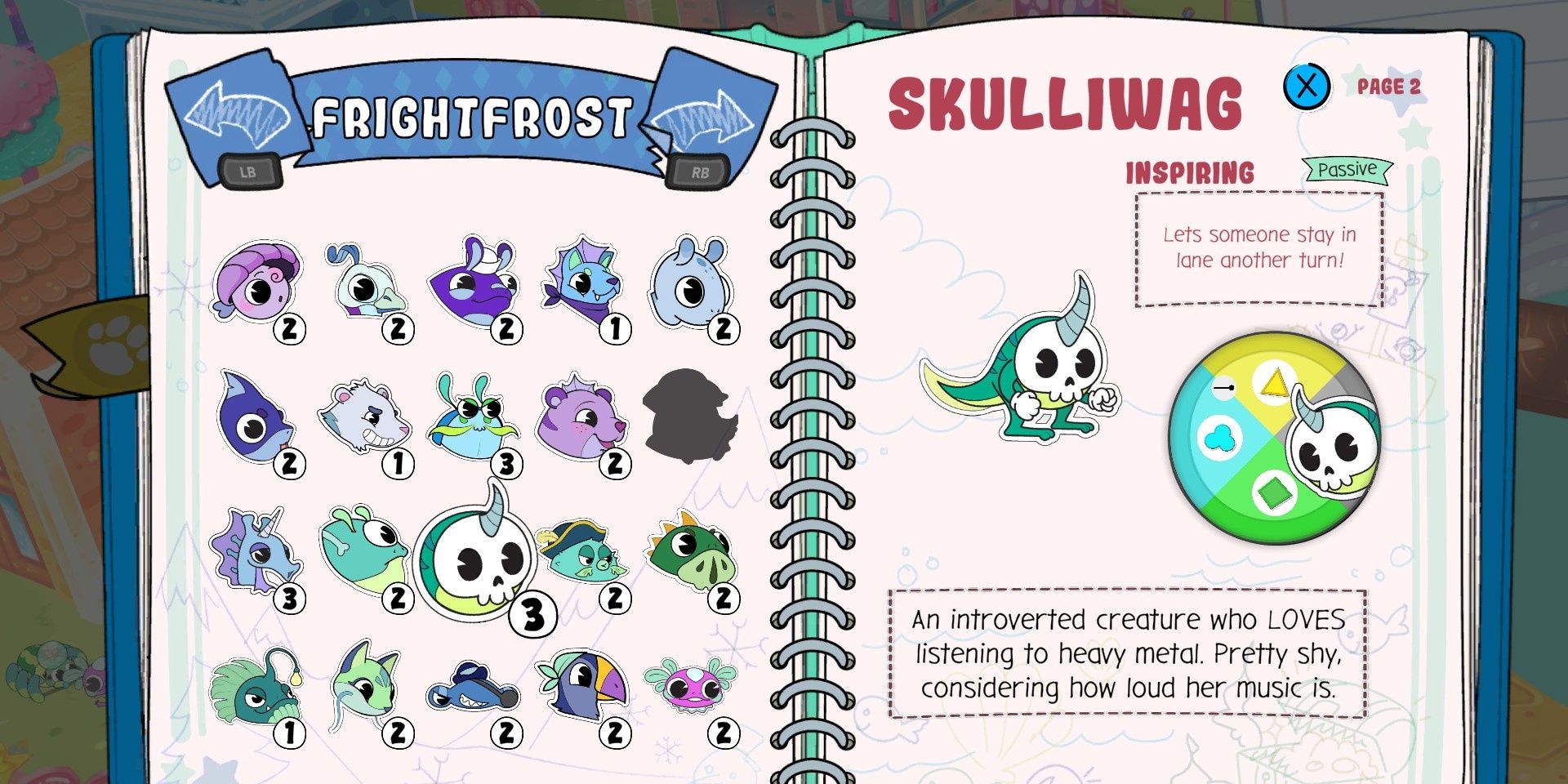 Skulliwag is a dyed-in-the-wool metalhead. It's the only kind of music she wants to listen to, and she always cranks it up to 11. Being a shy sort in her young years, the powerful melodies and lyrics of heavy metal gave her the courage to reinvent herself, but when her metal fangirling drove a wedge between her and her friends, she ended up isolating herself again.

Skulliwag loves to share her favorite metal tracks with others because they helped her so much, and doesn't realize she comes across too strong. On Billy and company's urgings, she learns to incorporate others' musical interests to broaden her perspective in addition to preaching the gospel of metal. 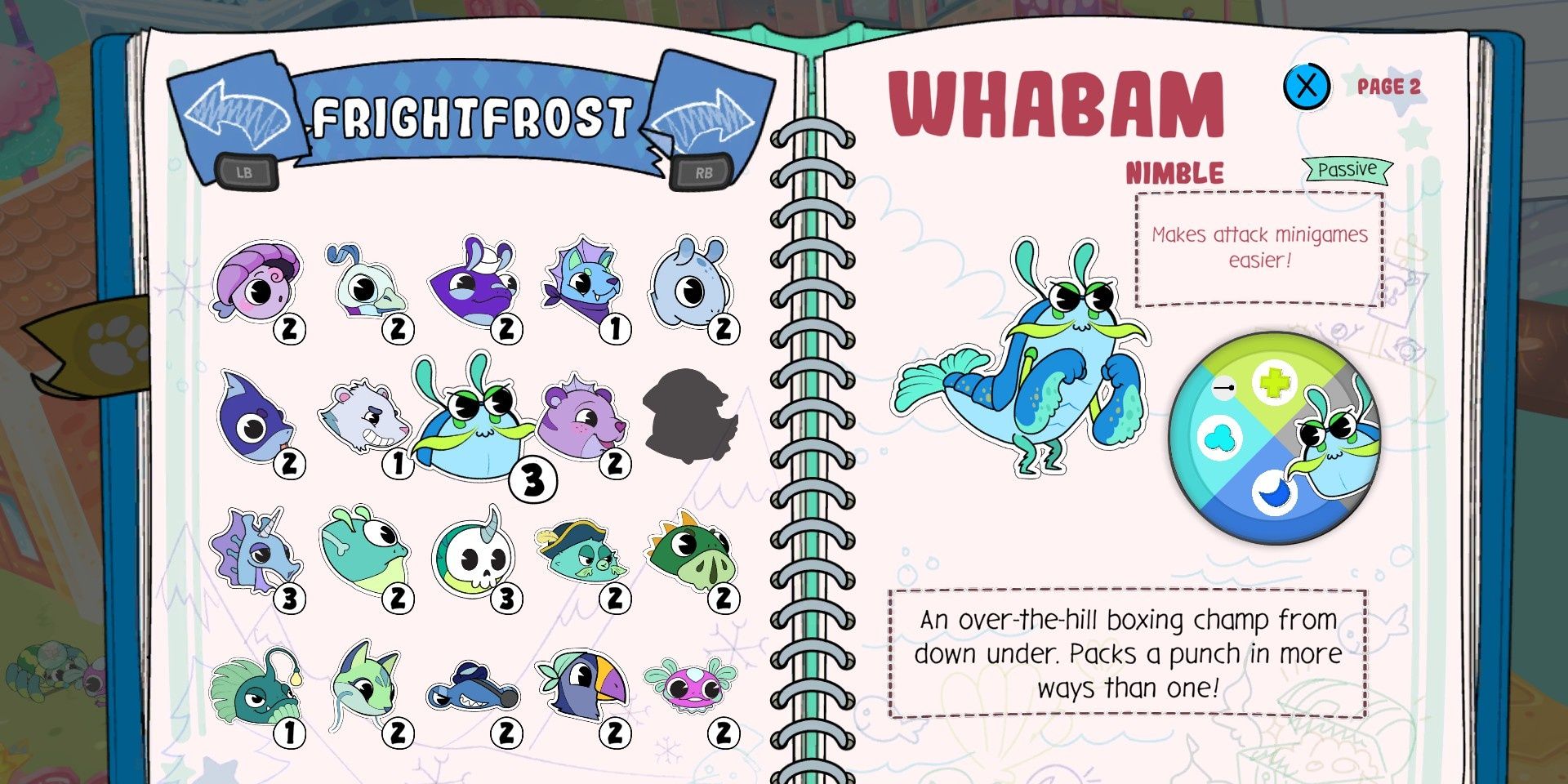 Whabam is quite possibly one of the most aggressively Australian individuals in the world. His passion in life is the noble sport of boxing, and in his heyday, he was a champion-level boxer of much renown. Unfortunately, he's not in his heyday anymore, and the idea that he'd have to put the gloves down doesn't sit well with him.

Whabam comes to realize, however, that being a champ isn't just about being the best at punching dudes. It's also about inspiring the next generation to be as great as he was, if not better. This is why he resolves to become a boxing trainer, spreading his love of the sport to the young brawlers of the future. 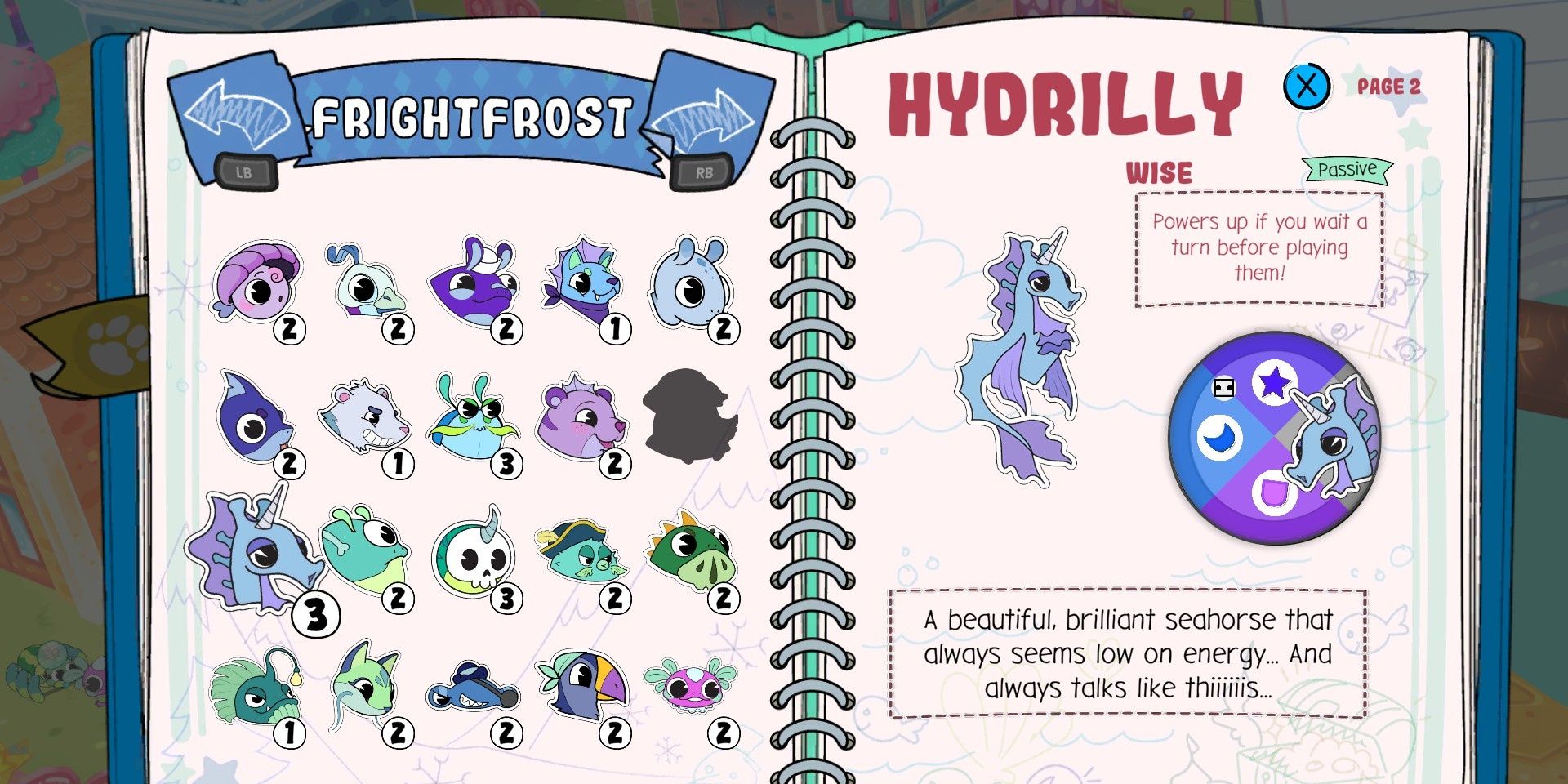 Hydrilly is an exceptionally talented musician whose soft melodies empower those around them. Sadly, Hydrilly lives with depression, and it constantly eats away at them. They're a generally low-energy person to begin with, so putting up with both her own hang-ups and life's problems are a constant drain on them.

Hydrilly wants to work through her depression, but when they were confronted with the reality that there were no instant fixes for it, they only felt worse about it. Thanks to their friends' urgings, though Hydrilly will take things one day at a time, doing their best to keep their chin up. 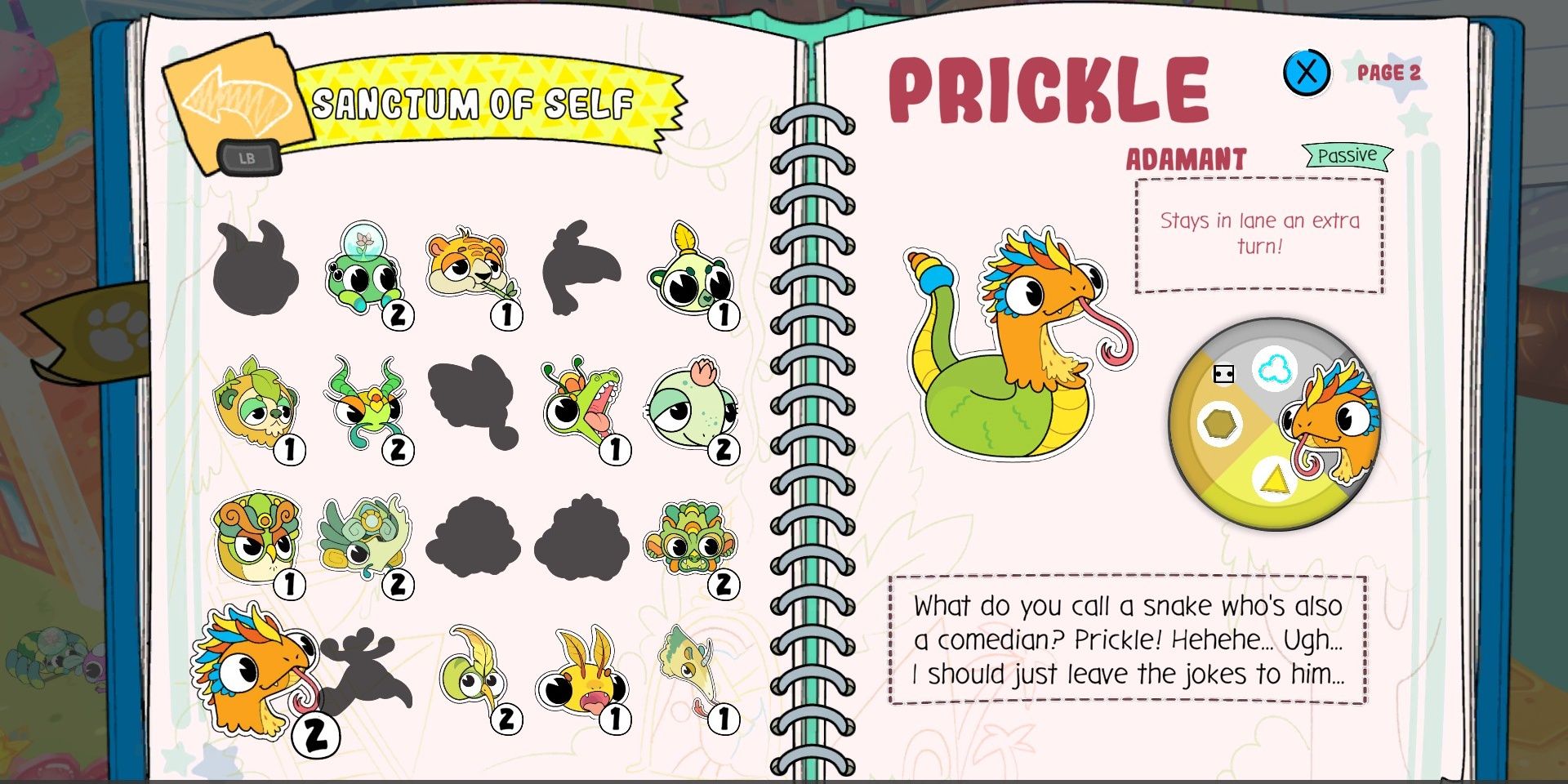 If you can make a pun out of two words, odds are good that Prickle has heard of it and bust a gut over it. This scaly dude absolutely loves comedy, and particularly enjoys tossing jokes (quality or otherwise) at anyone within earshot. He has a bit of a problem knowing when it's time to dial the jokes back a bit, however.

Prickle's loved jokes since he was a kid, but as he got older and had to take on more responsibilities, he became worried that he'd ultimately lose his sense of humor — overcompensating by telling jokes at inappropriate times. With some gentle encouragement, he learned the importance of being serious when it matters, and telling jokes when it doesn't. Timing's the most important element of comedy, after all. 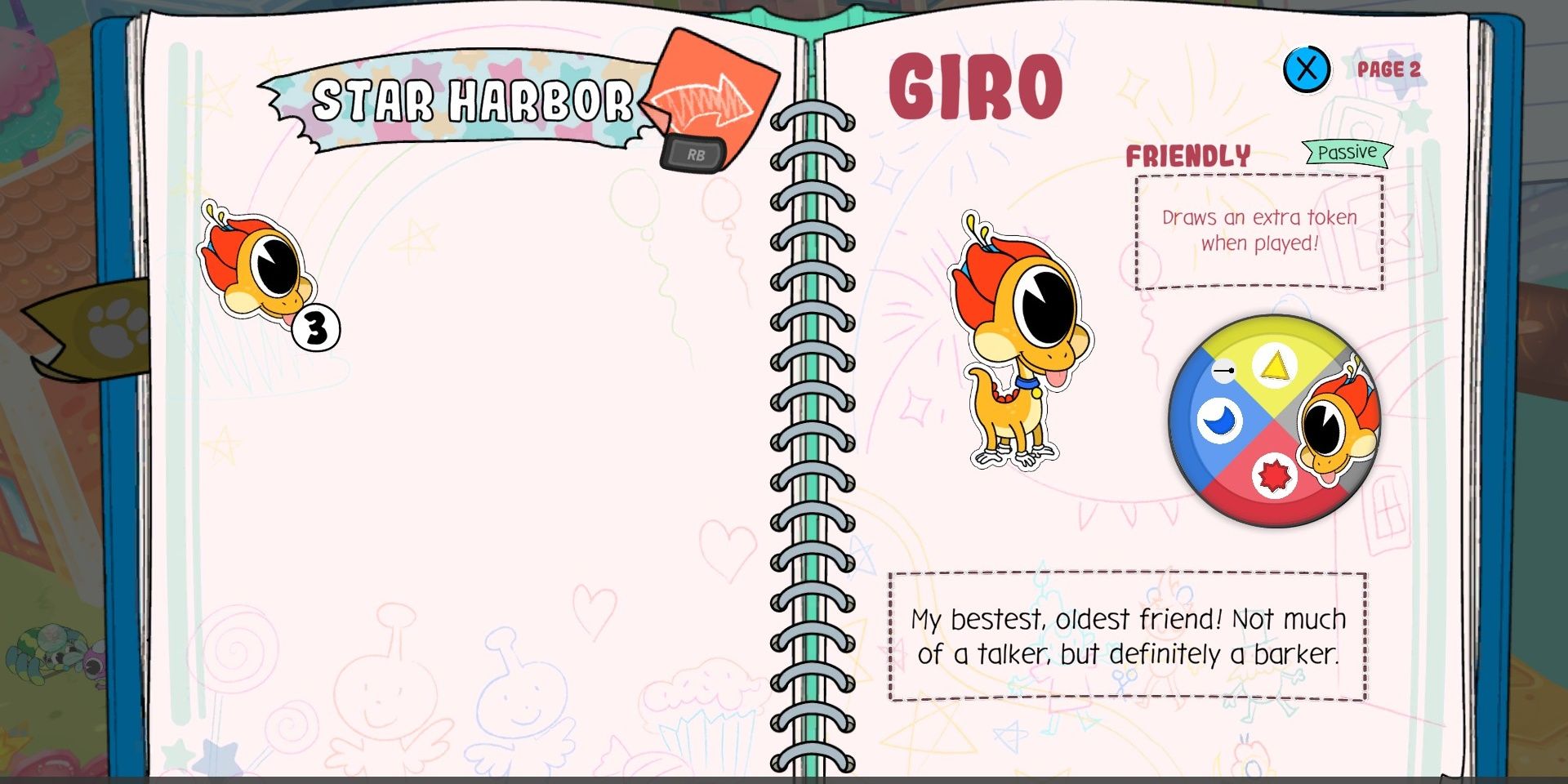 Billy's first and best friend, Giro is a certified good boy. Giro is based on Billy's actual dog in real life, a small golden-furred pup with a missing eye. Seeing as he's a dog, he obviously doesn't talk much, but Billy doesn't need to talk to him to know what he's thinking.

There's an unspoken bond of mutual love and trust between Giro and Billy, and the former would do whatever it takes to ensure the latter's safety and happiness. Even when Shadow Billy tries to turn Giro against Billy, it doesn't take because of just how exemplary their bond is. 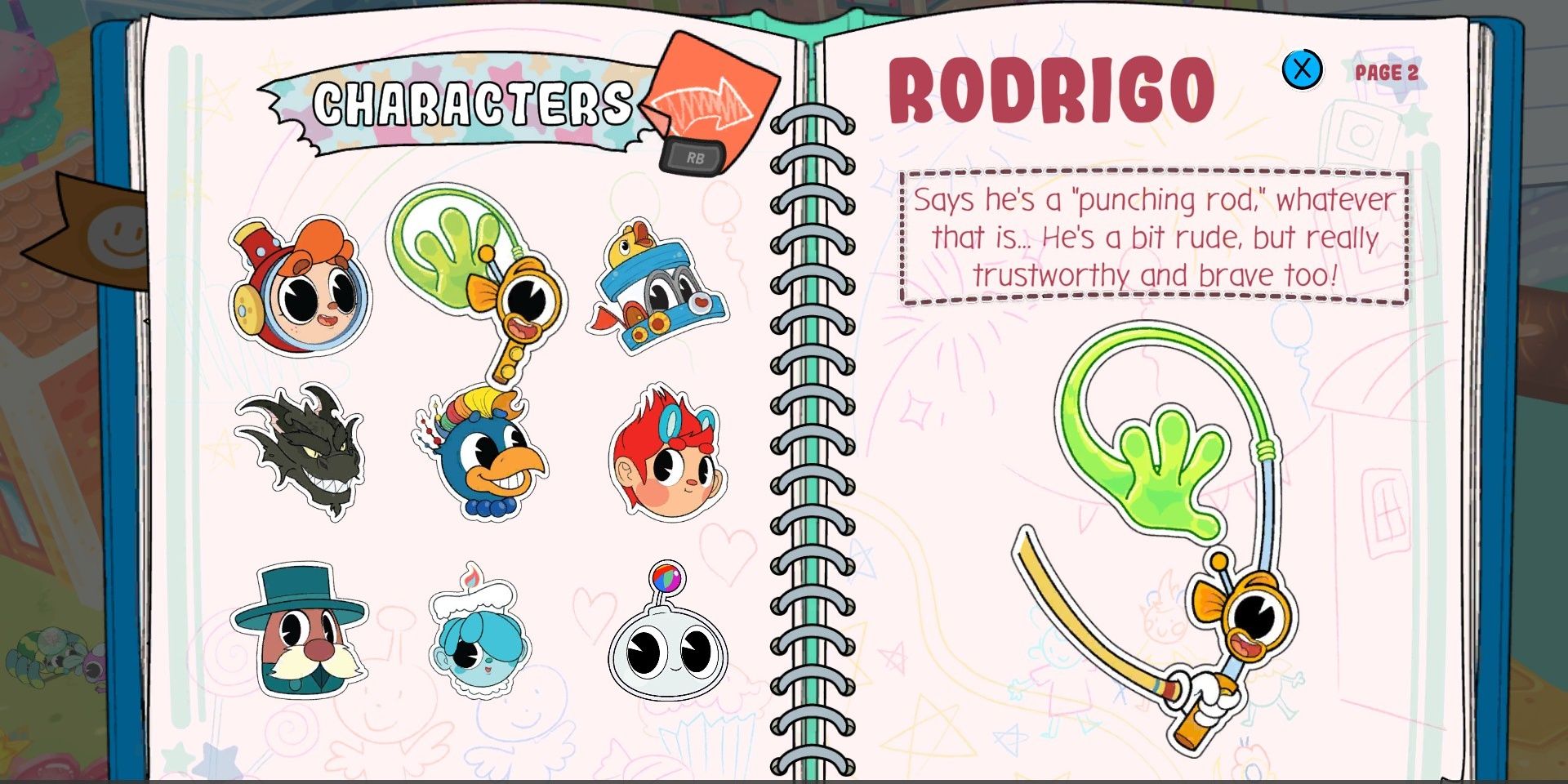 Not long after the Leviathan casts his curse, Billy stumbles upon Rodrigo the punching rod while escaping with Friend Ship. Boisterous and headstrong, Rodrigo acts as Billy's surrogate voice for a large portion of the game's story, as Billy is still too shy to speak for themselves. Similarly to Giro, Rodrigo and Billy are on a similar wavelength, with Rodrigo being able to interpret their moods and desires without too much difficulty.

It's thanks to Rodrigo's sticky hand-powered abilities that Billy can explore islands and rescue his friends from Leviathan's curse. Plus, his occasionally short temper actually helps Billy to come out of their shell to calm him down which, while not intentional on Rodrigo's part, is definitely a net benefit for Billy. 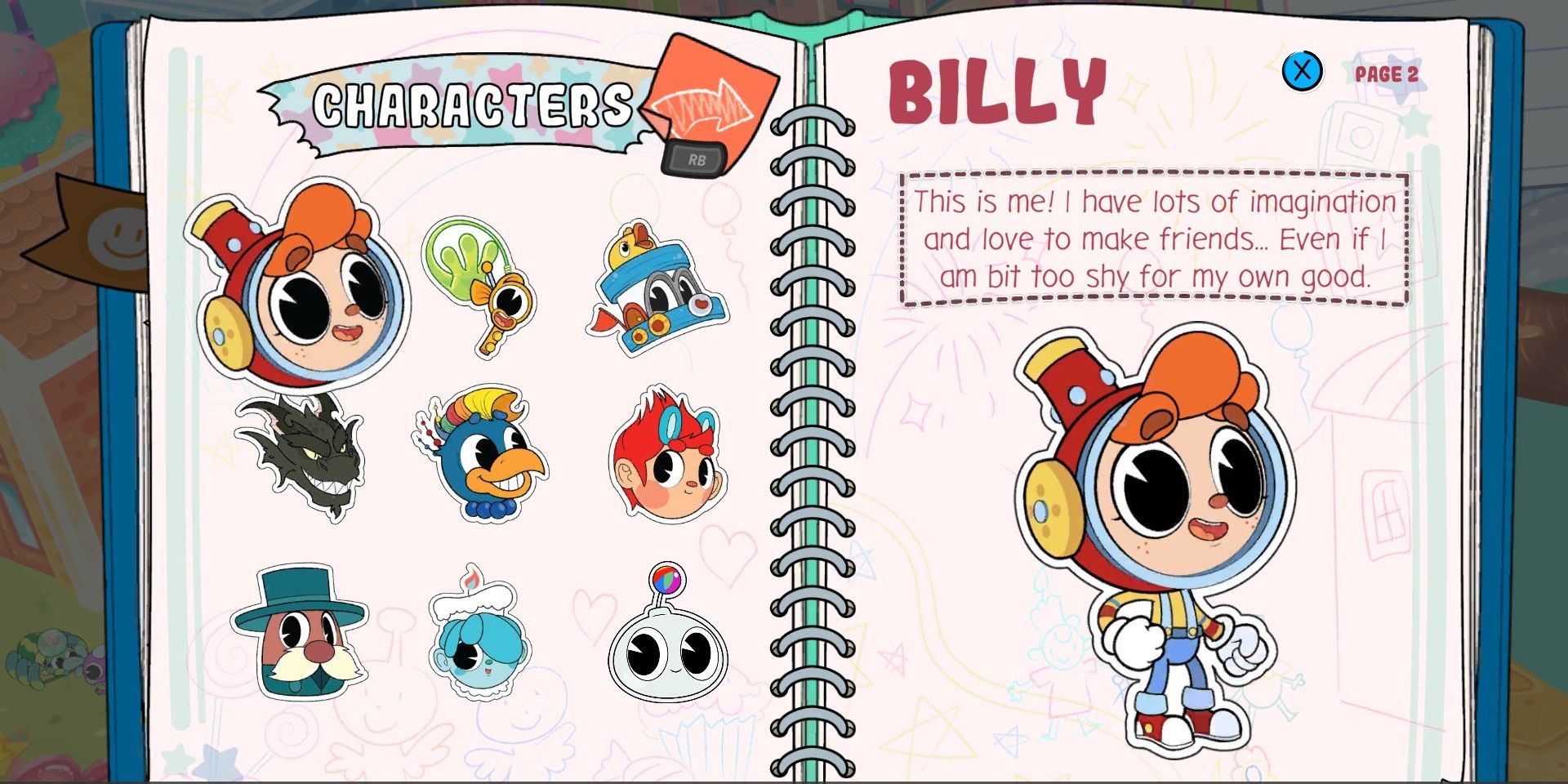 Considering the islands are Billy's own world of imagination, it wouldn't be an exaggeration to say that Billy is quite literally at the center of it all. A creative and compassionate person with a rainbow of colors in their heart, Billy loves to use their imagination, both for the fun of it and to help them through life's struggles.

When Billy's mother passed away, they were lost for a while, but it's thanks to their imagination that they were able to weather the hard times and ultimately repair their strained relationship with their overbearing father.