You are here:
Home / 10 Strangest Justifications For Game Mechanics

For about as long as games have existed, they've utilized recurring concepts like hit points, lives, scores, you get the idea. These exist for the benefit of us, the players, because they provide a convenient abstraction for important game elements like how close you are to death or how well you're doing.

However, in the world of a game itself, things like lives and HP don't exist. If a character is dead, then they're just dead. So how do they rationalize away concepts that shouldn't exist like that? Well, some games have found a few convenient, if not entirely sensible, ways of doing just that. 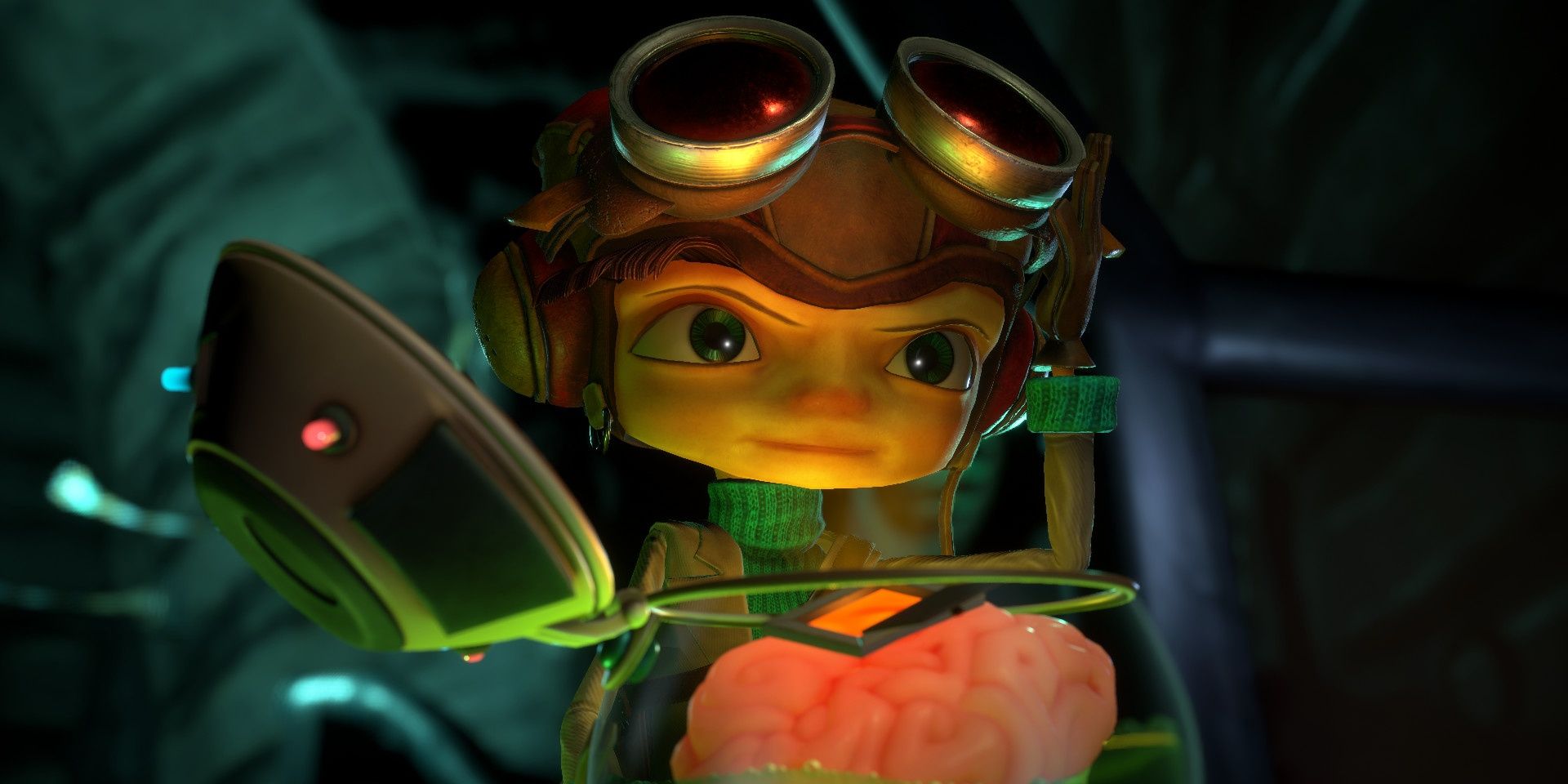 When Raz enters someone's mind in Psychonauts, he's not actually entering as himself, but rather as an astral projection of himself. Think of it like a remote-controlled thought ghost. When inside a mental world, Raz's health is measured by health and lives, but the explanations for those are the integrity of Raz's projection.

Basically, Raz's health represents how sturdy his projection is. If his projection is compromised by mental damage, a layer of the projection peels off and dissolves. In other words, he loses a life. Of course, this still raises questions about his health in the real world, not to mention the fact that the lives system was completely scrapped in Psychonauts 2. Maybe Raz has some kind of invisible psychic armor? 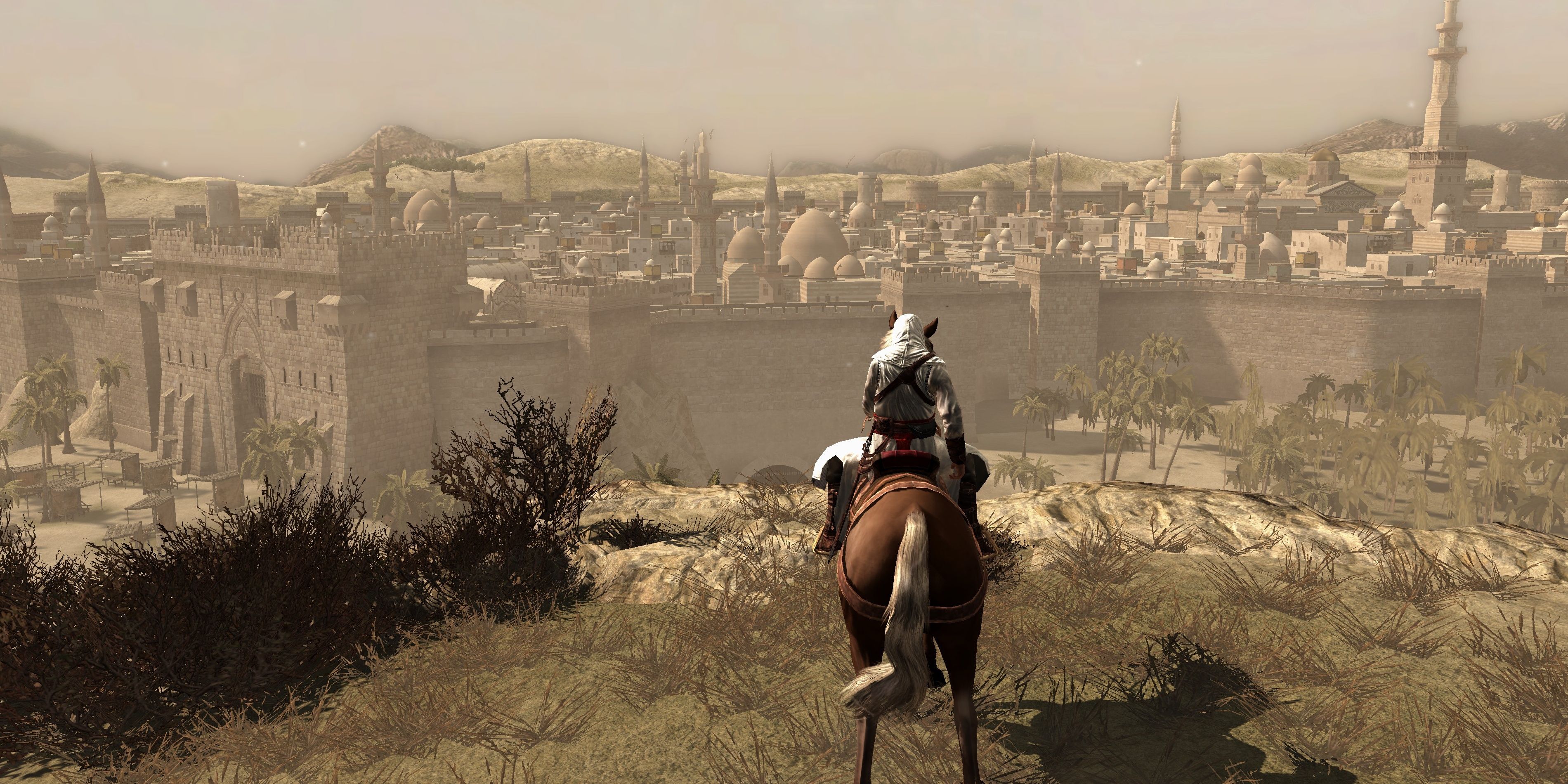 This is why, rather than regular health, your well-being is measured by "synchronization," a metric of how in-tune the modern-day person is with their ancestor's history. It decreases when you take damage or kill innocent people because their ancestors didn't do that stuff. Basically, Altair didn't get his teeth kicked in by a random mook, so you're veering off the correct course of history when you do. 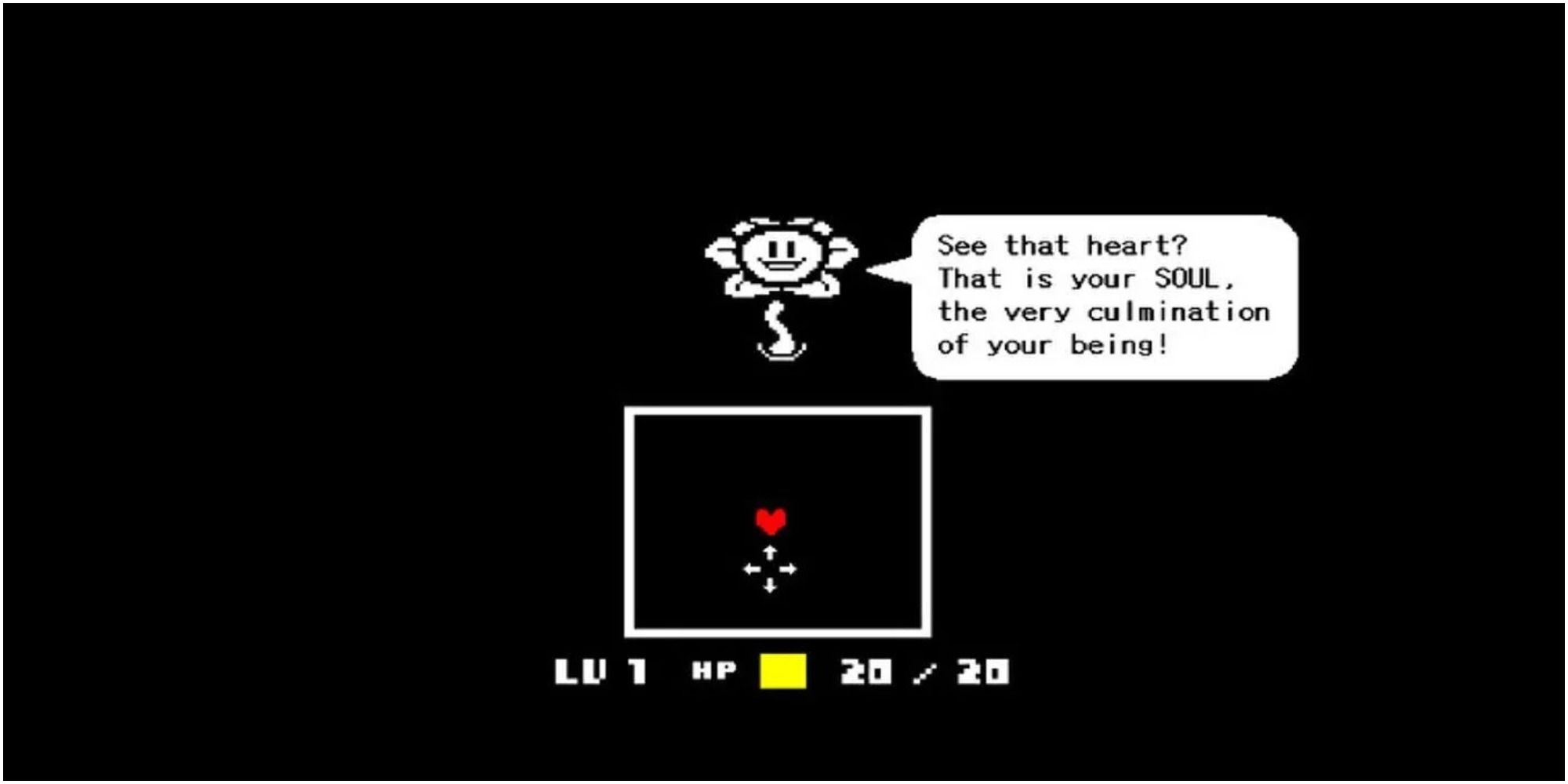 At the beginning of Undertale, you're encouraged by Flowey to get as much LOVE and EXP as possible. Naturally, your assumption is that these are just shorthand for levels and experience like in any other game, but Sans reveals to you at the end of the game that this is very much not the case.

While LOVE and EXP are functionally analogous to level and experience, they're actually abbreviations. LOVE stands for "Level Of Violence," and EXP stands for "Execution Points." They're not metrics of how strong or learned you are, they're representations of how desensitized you've become to murder and how many monsters you've needlessly slaughtered, respectively. This is why, ironically, the game gets harder the higher your LV is rather than easier as it would in other games: because you've become such an omnicidal murderer that your opponents will do everything they can to stop you. 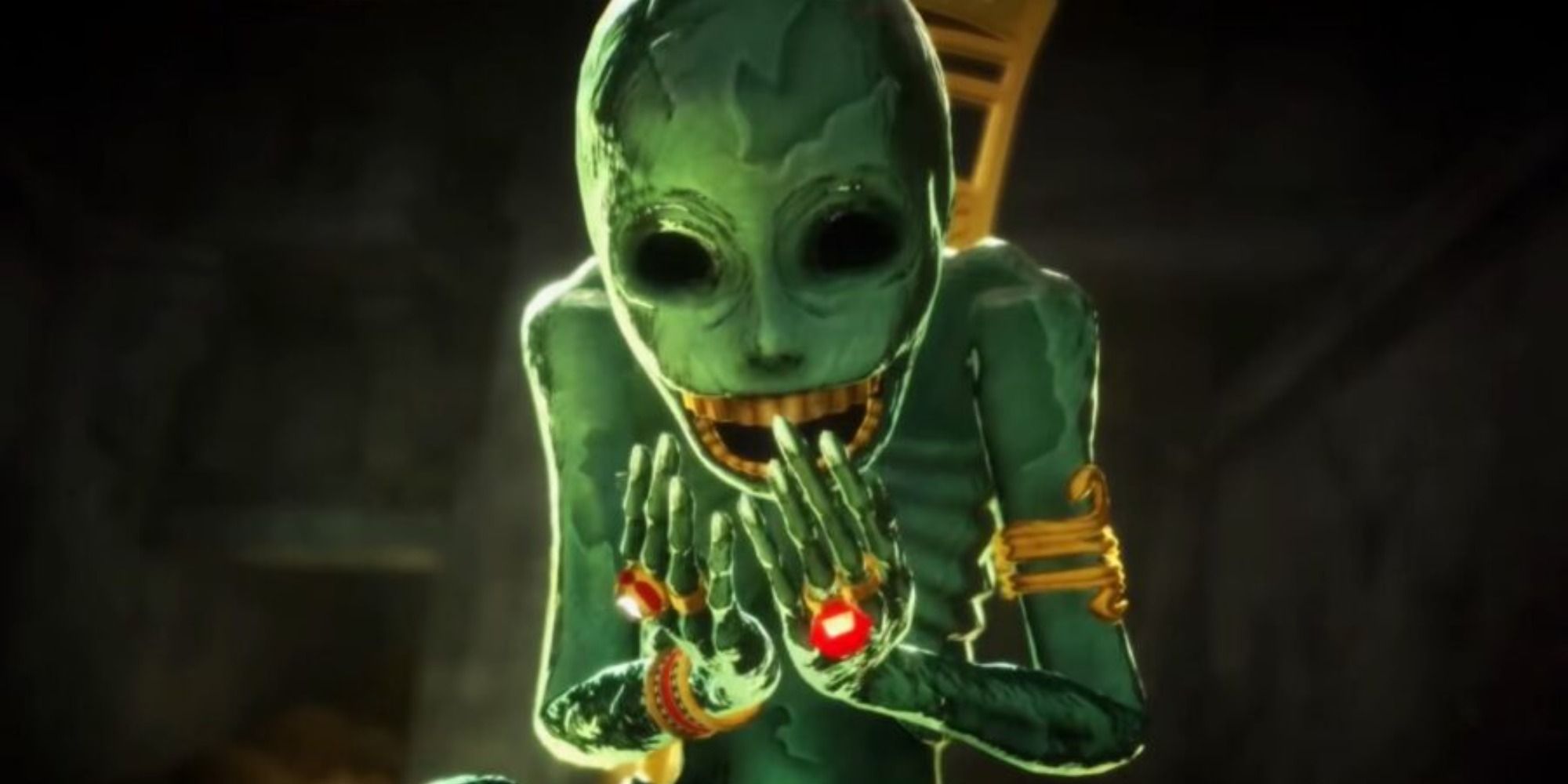 In almost all the Shin Megami Tensei games, the currency of choice is called Macca. Macca isn't actually money, but rather a kind of catch-all energy that can be utilized by both demons and humans with the appropriate technology. Since that's such a valuable commodity, though, it can easily take the place of traditional money, kind of like a more practical gold.

Shin Megami Tensei: Strange Journey had a particularly clever application of Macca. You can spend the stuff in your mobile base to buy items and heal yourself, but you're not actually buying anything. Macca just powers your base's systems and allows you to use its medical and reconstructive technology. 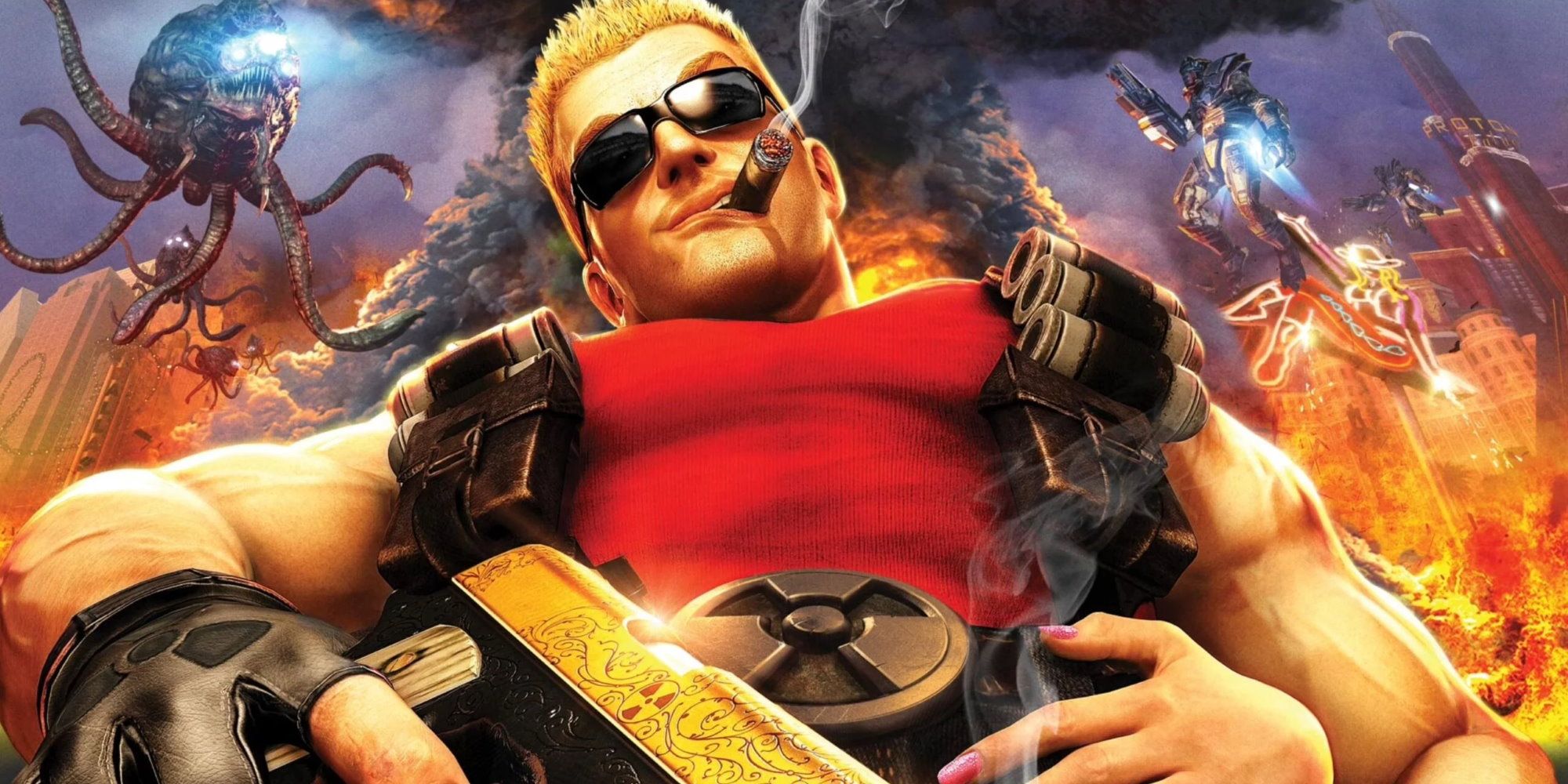 You could say a lot of things about Duke Nukem Forever, mostly bad things, but you have to give the game this: it did come up with a clever health system. Rather than a traditional HP bar, Duke has an "Ego" bar. Functionally, it's the same thing, but rather than an abstraction of his health state, it's an abstraction of how full of himself Duke is.

Duke Nukem is, after all, a borderline supernaturally egotistical person. When he's really full of himself, he can shrug off bullets with the justification of "I'm Duke Nukem and I'm completely unkillable." Of course, as his Ego drains out, reality reasserts itself, and he's reduced to an ordinary, squishy human being. 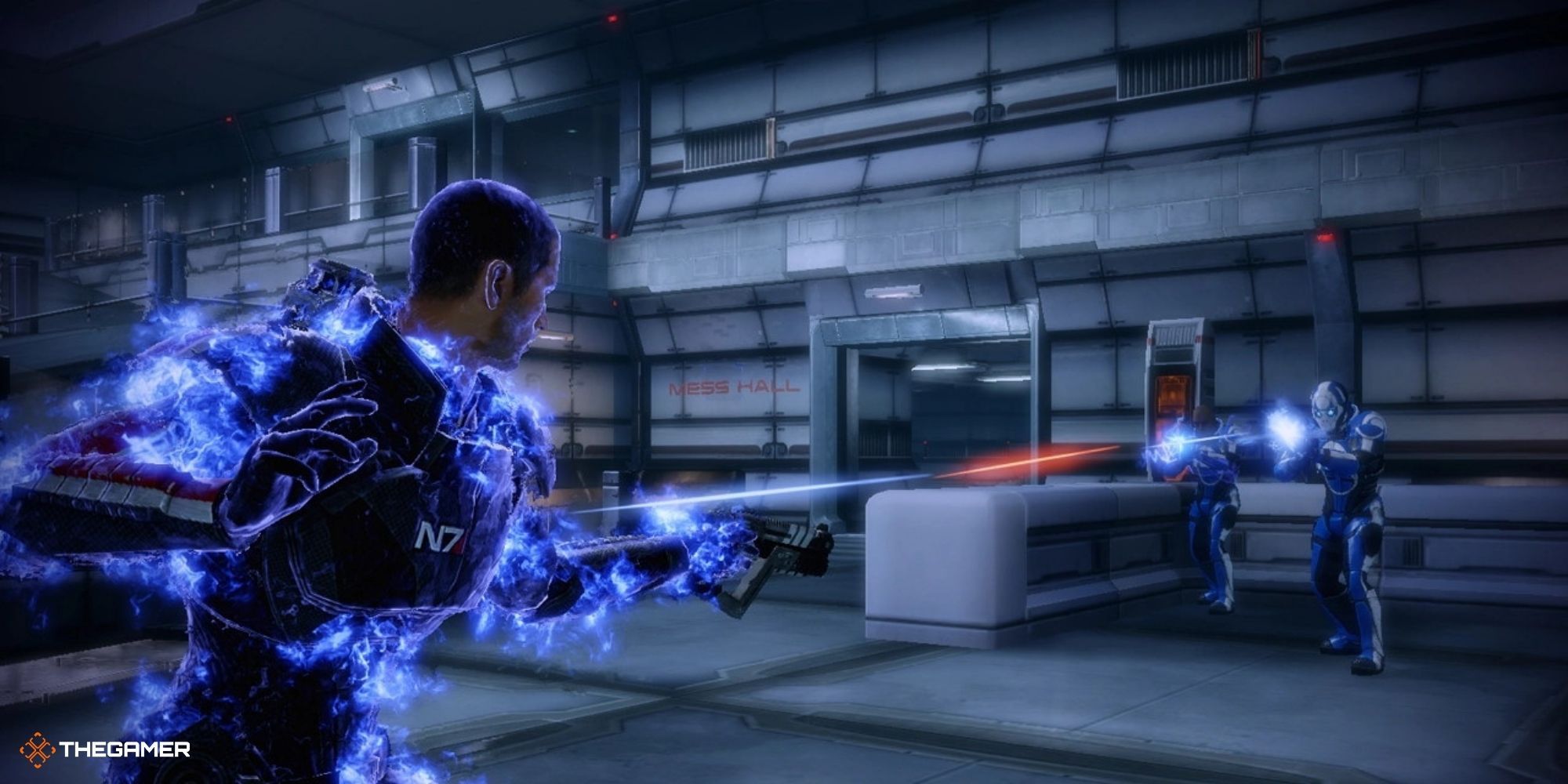 The weapons in the original Mass Effect all ran off of heating systems rather than ammunition. When you fired a gun too much, it would overheat, and you'd need to wait a moment for it to cool off. However, in Mass Effect 2 onwards, all of your guns start using regular disposable ammo clips.

How does this work when your guns aren't actually firing bullets? Simple: they're not ammo clips, they're "thermal clips." Basically, they're like disposable heat sinks, little doodads that quickly suck up the excess heat from your weapon until they break, at which point you just throw them away and stick a fresh one in. 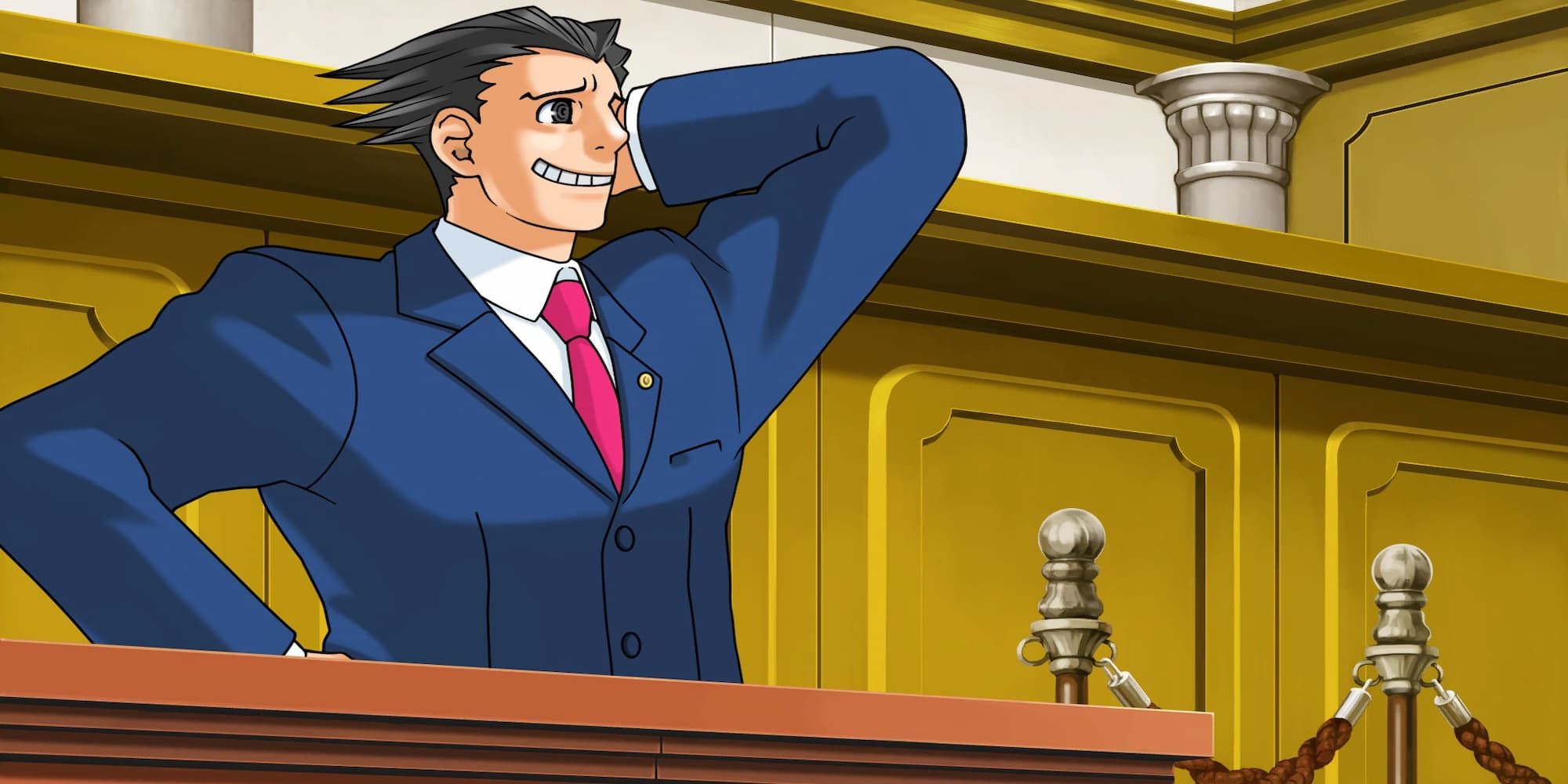 Despite the amount of shouting that goes on in any Ace Attorney game, no one's in any actual danger, at least not usually. How, then, do you account for a health system in a setting where nobody is in physical danger? You use confidence. And rely on the implication of danger.

The green meter that started showing up in the second Ace Attorney game-onwards represents a hybrid of Wright's confidence in his assertions and how tired the Judge is with dealing with him. As Wright makes wrong assertions, he loses confidence in his case, and the Judge gets closer to holding him in contempt of the court. That meter also shows up during Psyche Lock segments, and if it's low after one of those segments, it'll be low in the courtroom afterward. Messing up spiritual powers isn't great for your confidence. 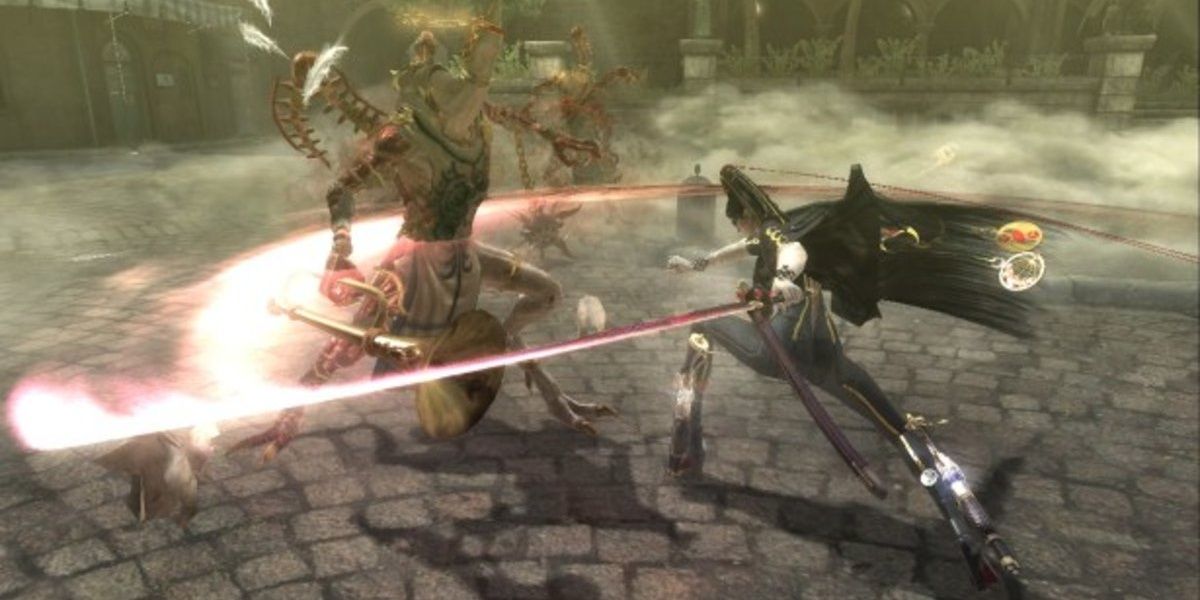 As Bayonetta massacres the Angels sent to kill her by Paradiso, they leave behind their glowing golden halos. These halos are used as Bayonetta's primary currency when buying stuff from Rodin at the Gates of Hell. How exactly do magical artifacts have any monetary value, though?

As it turns out, halos are extremely valuable to the demons of Inferno, many of whom Rodin is closely acquainted with. You give him the halos, he gets you weapons, items, and instructional tools from his friends down south. Interestingly, the demons you fight in Bayonetta 2 drop their blood rather than Halos, but apparently, their value is 1:1. Demons just really like stuff dropped by dead things, apparently. 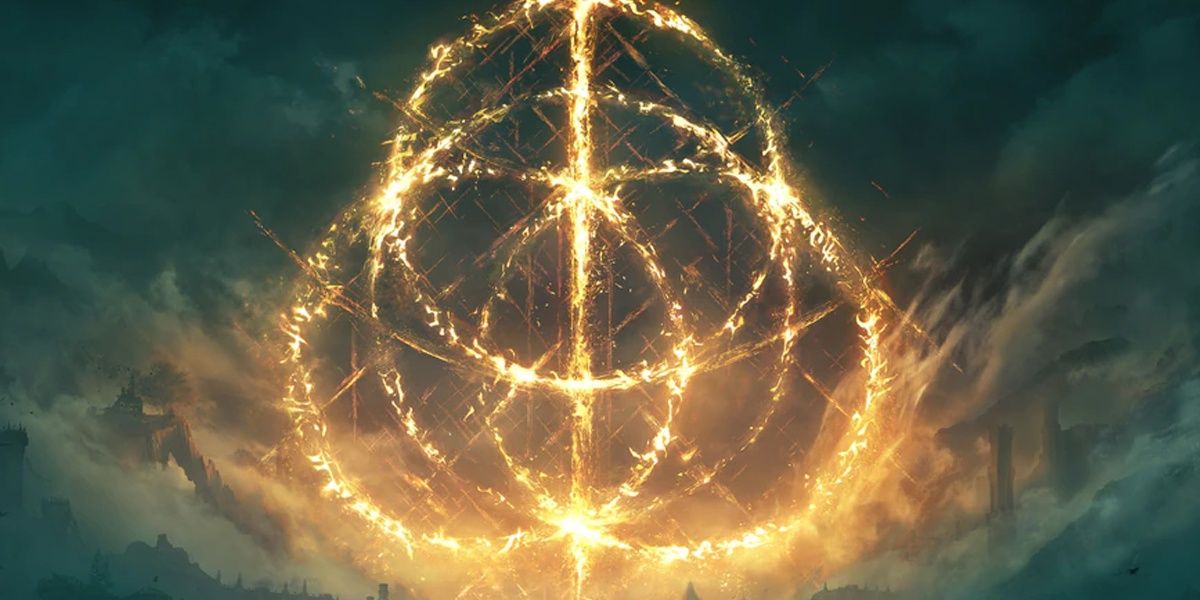 In the world of Elden Ring, almost everything is governed by… well, the Elden Ring. Specifically, by the myriad Runes left behind when the Elden Ring was shattered. Even a single, paltry Rune contains great power drawn from the very core of the Lands Between, which is why they're highly coveted as both a currency and a means of enhancement.

When you kill creatures and monsters, they collapse into indistinguishable clouds of Runes, which you can obtain for yourself to buy things and empower yourself (with Melina's help, of course). Everyone needs an edge in such a hostile place, so naturally, everyone accepts Runes as a universal currency. 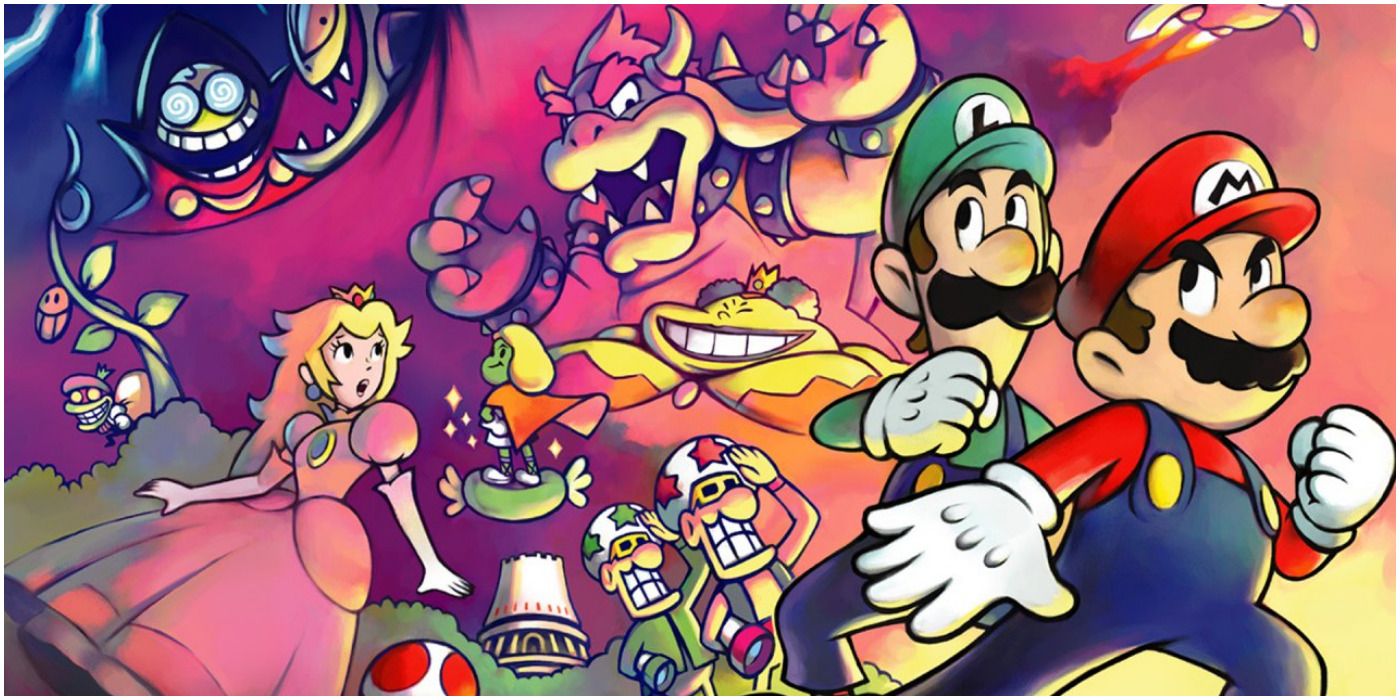 In most of the Mario & Luigi games, Mario and Luigi's capabilities are tracked by typical stats like HP, Power, Speed, and so on. However, there is one outlier stat: 'Stache. The 'Stache stat is roughly analogous to a luck stat in other RPGs, as it determines how often Mario and Luigi land critical hits, as well as how much of a discount they get in shops.

While an official explanation for this isn't given, the implication is that Mario and Luigi's famous mustaches are so expertly coiffed and maintained that shopkeepers can't help but give them a discount, and enemies can't help but be thrown off guard by them. When playing as Bowser in Bowser's Inside Story, 'Stache is replaced with his special Horn stat.