You are here:
Home / 10 Sesame Street Games You Didn’t Know About

While many games based on Sesame Street are computer games, as one may expect, there have also been plenty of Sesame Street games launched for different consoles since the early '80s. 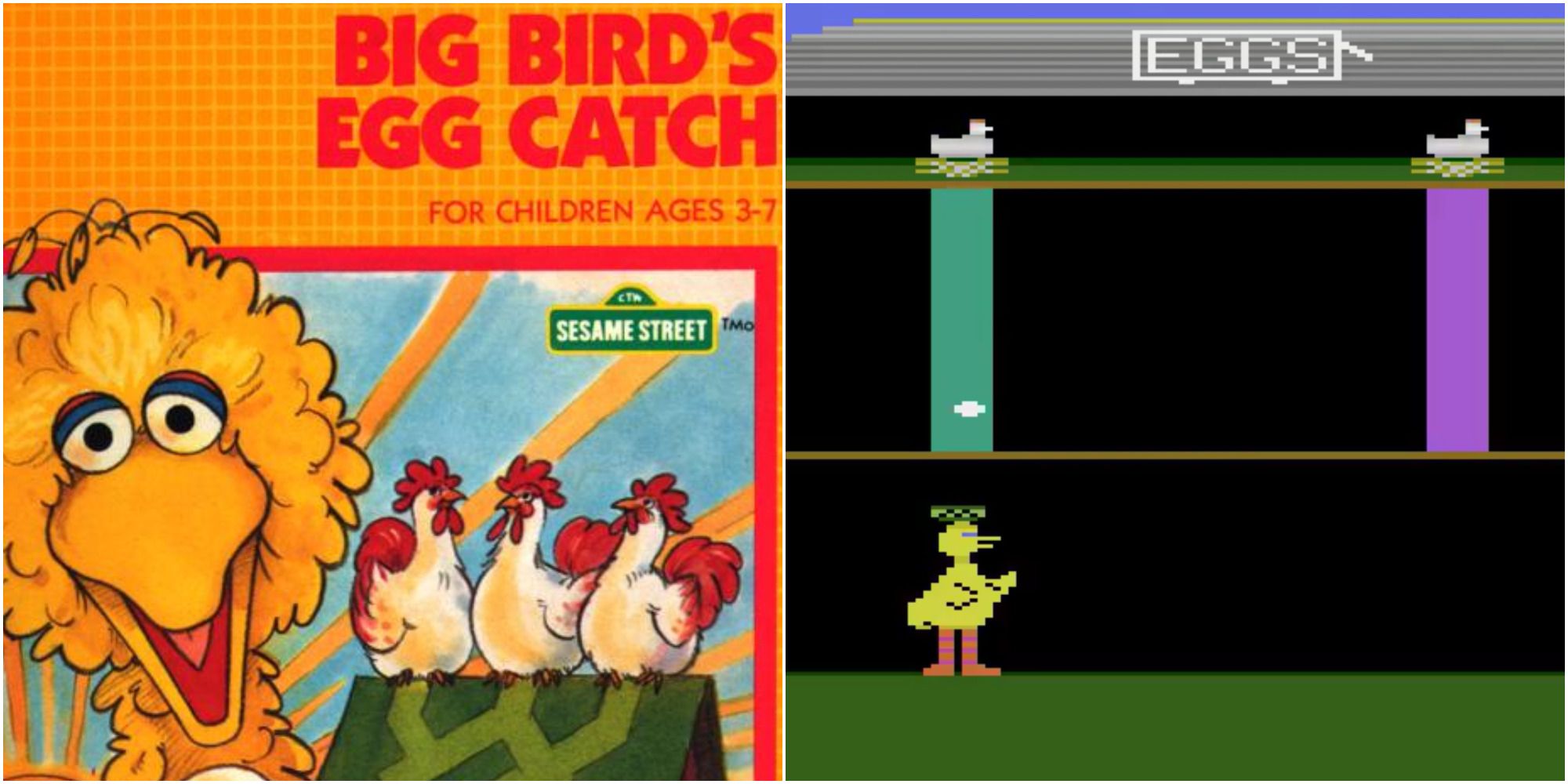 Big Bird's Egg Catch was the first console game based on Sesame Street as well as the first to feature Big Bird as the playable character and launched for the Atari 2600 in 1983.

In Big Bird's Egg Catch, Big Bird must catch the eggs being laid by several chickens, each placed at the top of a different chute. Big Bird's Egg Catch also has a variety of levels, the first of which is a practice round limited to a single player, while the rest can have one or two players and become increasingly more difficult as they go on. 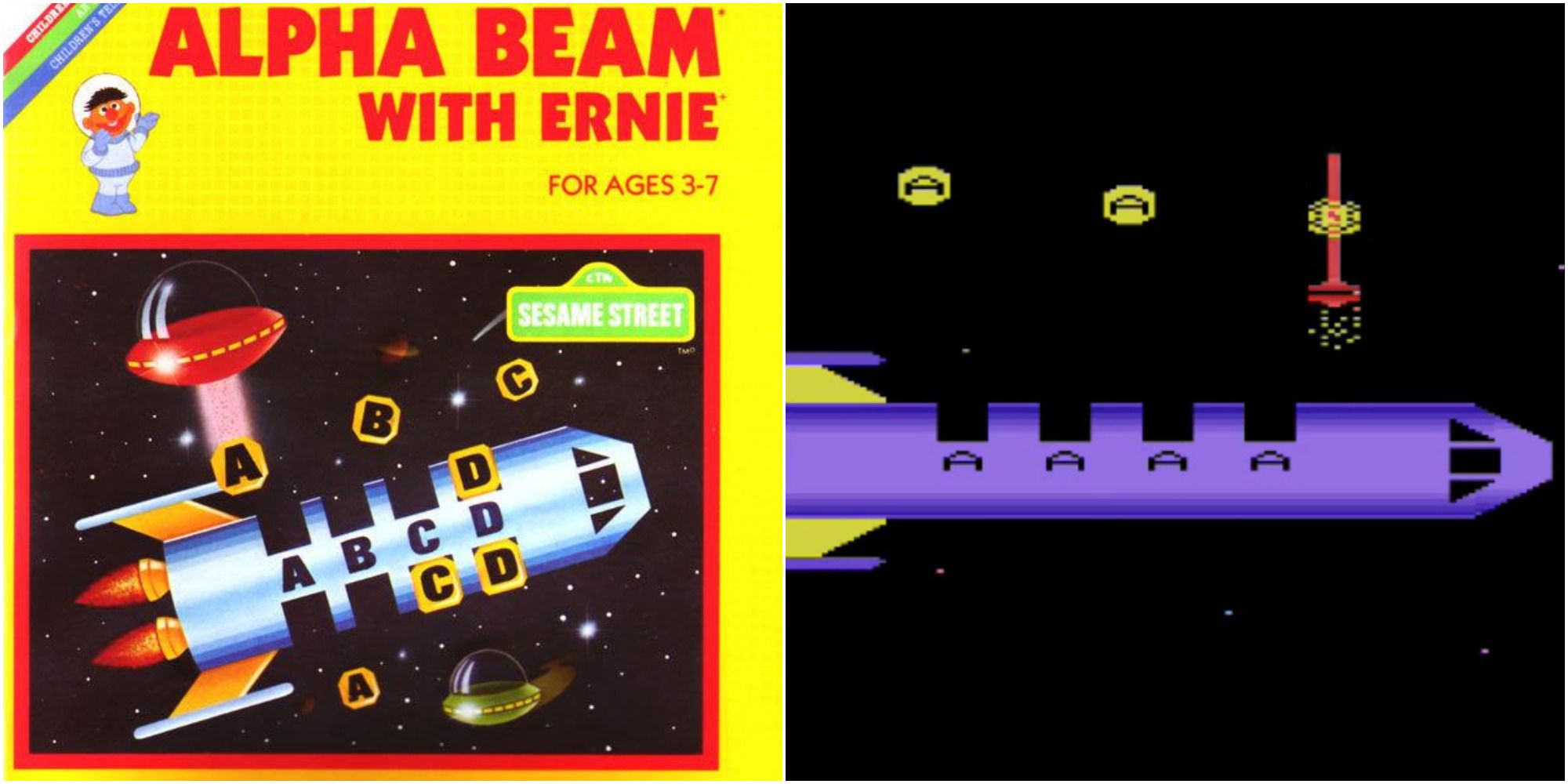 Alpha Beam With Ernie launched for the Atari 2600 in 1983 and was the second Sesame Street video game to star Ernie, with the first being Ernie's Quiz for the Apple II in 1981. Alpha Beam With Ernie is a letter matching game where players must choose the correct corresponding letters to refuel Ernie's rocket ship.

This game is a more straightforward one than its predecessors and helps teach young children to recognize letters rather than teaching them how to count. This gives it far more educational value than Big Birds Egg Catch since the letters are more obviously displayed. 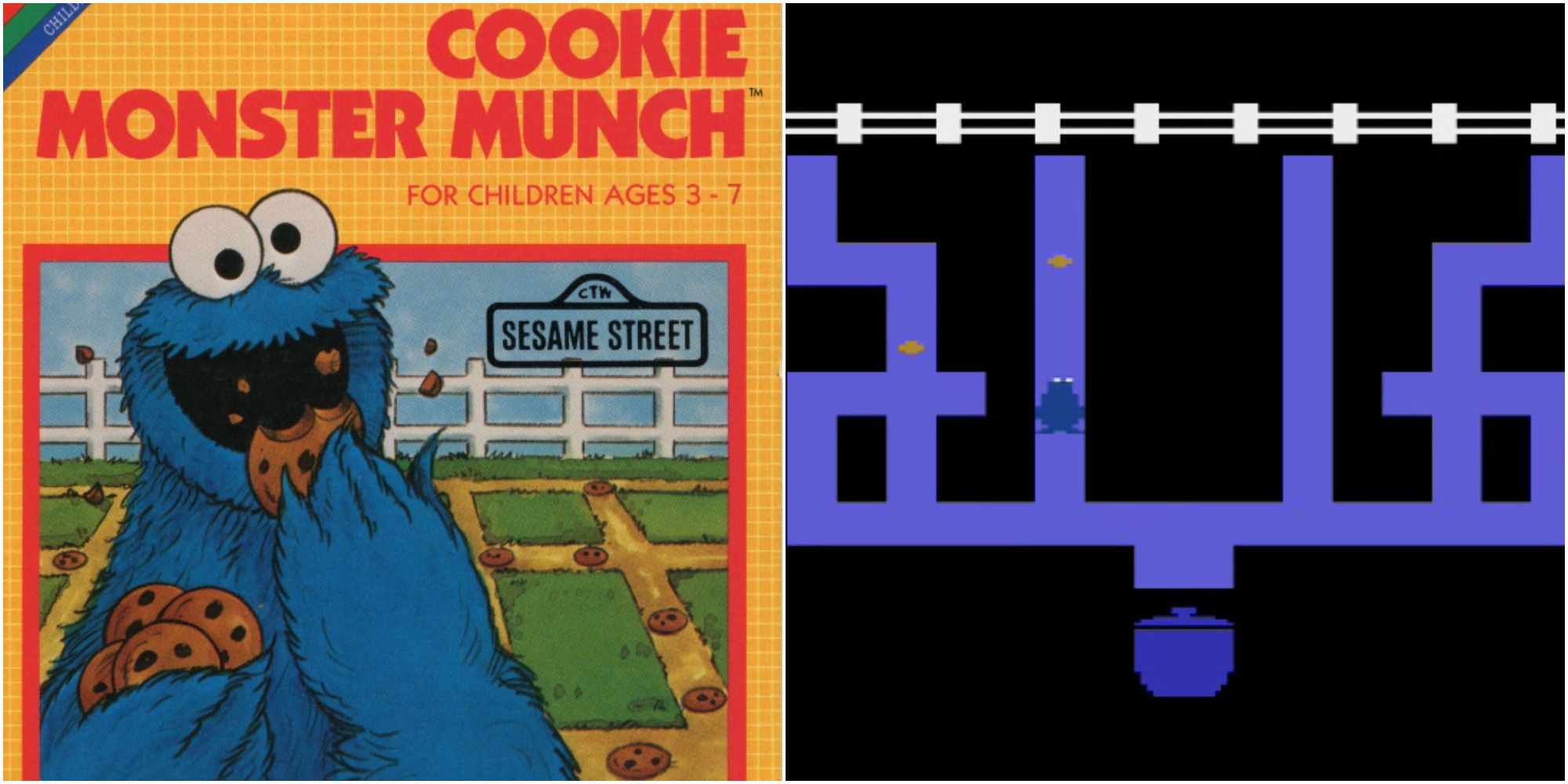 There are more cookies to collect in each level, so the playable characters' speed increases to make up for that fact. Introducing original characters is also something Sesame Street video games have continued to do since 1983. 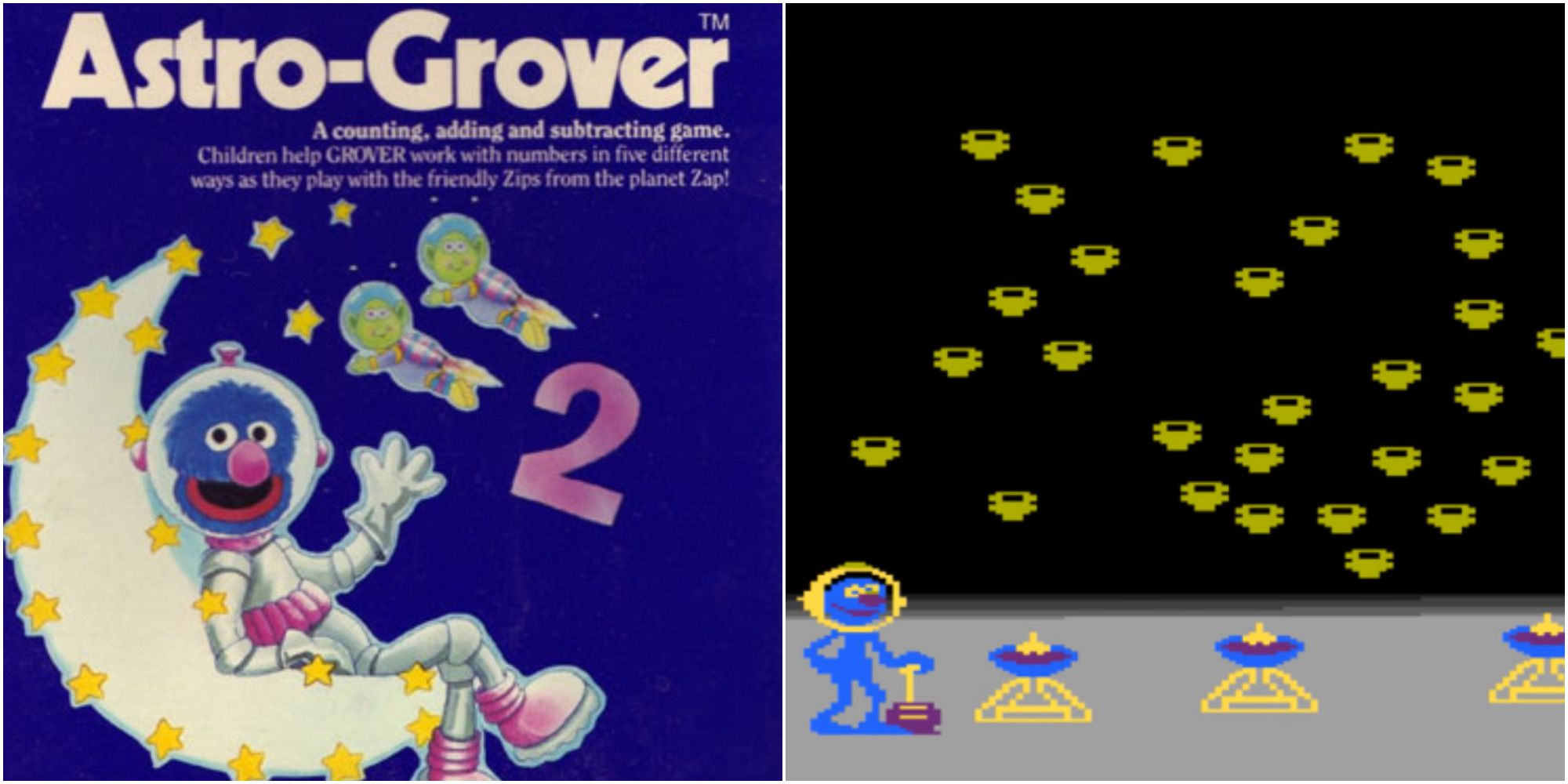 Astro-Grover launched for the Atari 8-bit, Commodore 64, Apple II, and DOS computers in 1984 and was the first game to feature Grover prominently. In Astro-Grover, players learn to count and perform basic math equations through addition and subtraction with the help of Grover and a group of game exclusive aliens known as Zips, not to be confused with the pair of Yip Yip aliens that often appear in the show and only say the name of their species.

Astro-Grover was also packaged alongside Ernie's Magic Shapes for Sesame Street 1 2 3 on the Nintendo Entertainment System in 1986. 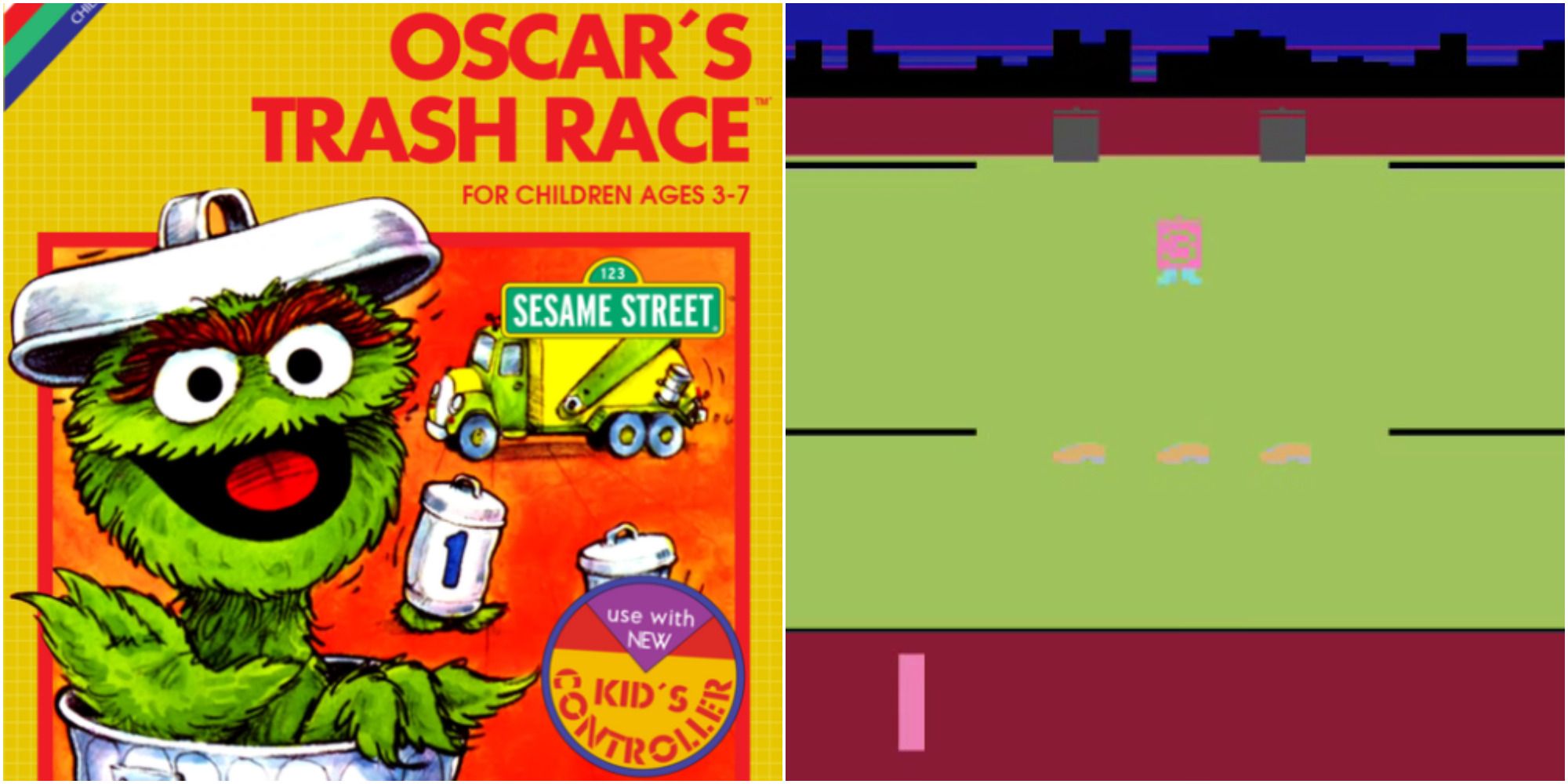 In Oscar's Trash Race, players pick up trash by moving the trashcan that corresponds to the number of items they need to pick up. As the game goes on, obstacles such as puddles are added and must be jumped in, or they will temporarily hinder the players. Depending on the level, Oscar's Trash Race can also be played by either one or two players. 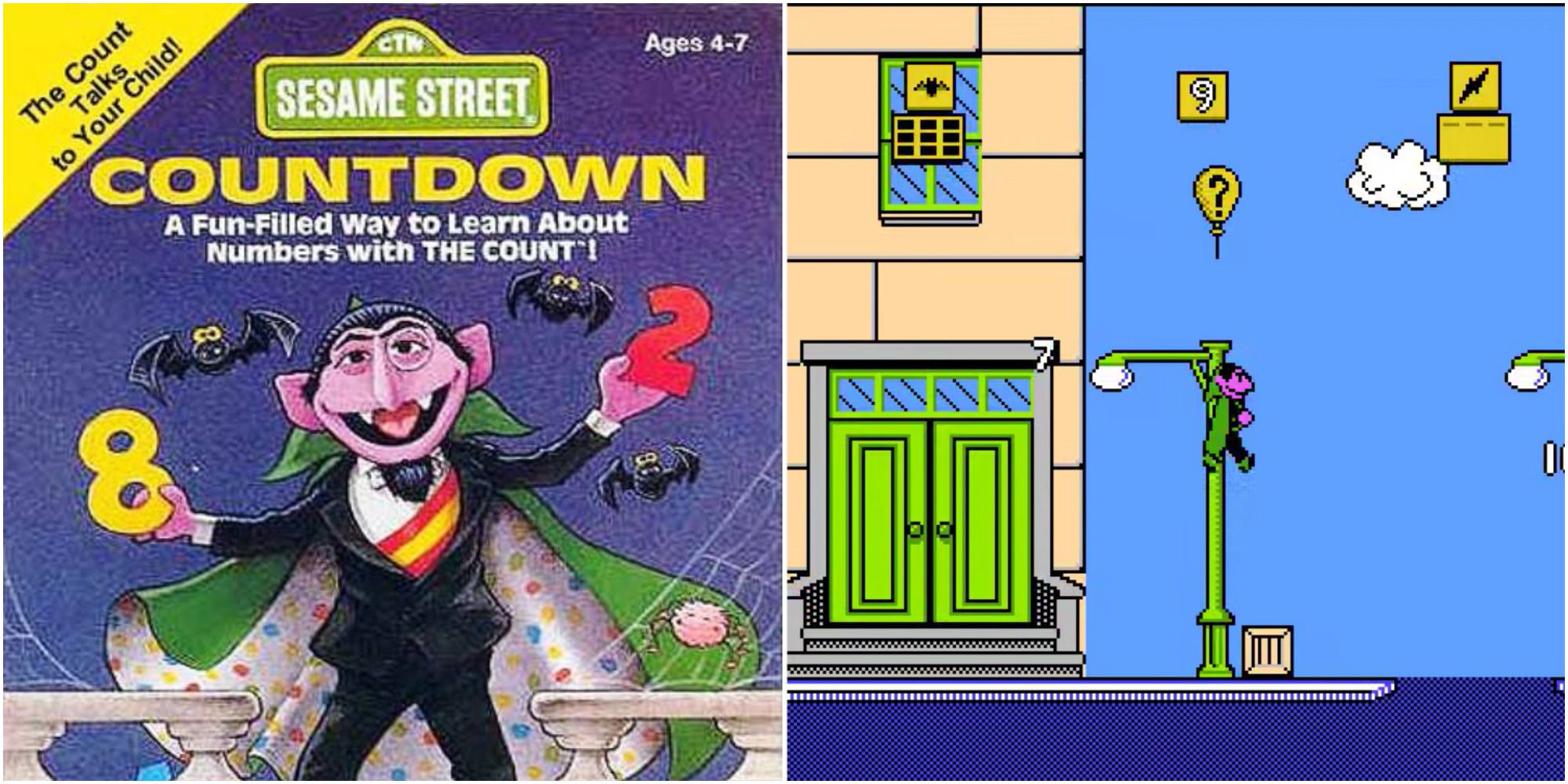 Sesame Street Countdown launched for the Nintendo Entertainment System in 1992 and starred Count Von Count, and was the first Sesame Street video game to prominently feature the character. Unlike the games before it, Sesame Street Countdown is a platformer where the Count must collect items of the corresponding number in each level. The Count also has a health bar, which will decrease when he touches the wrong number.

Another interesting aspect of Sesame Street Countdown is that players can select whether they want to run or hop through each level, which helps give the game some added replay value. 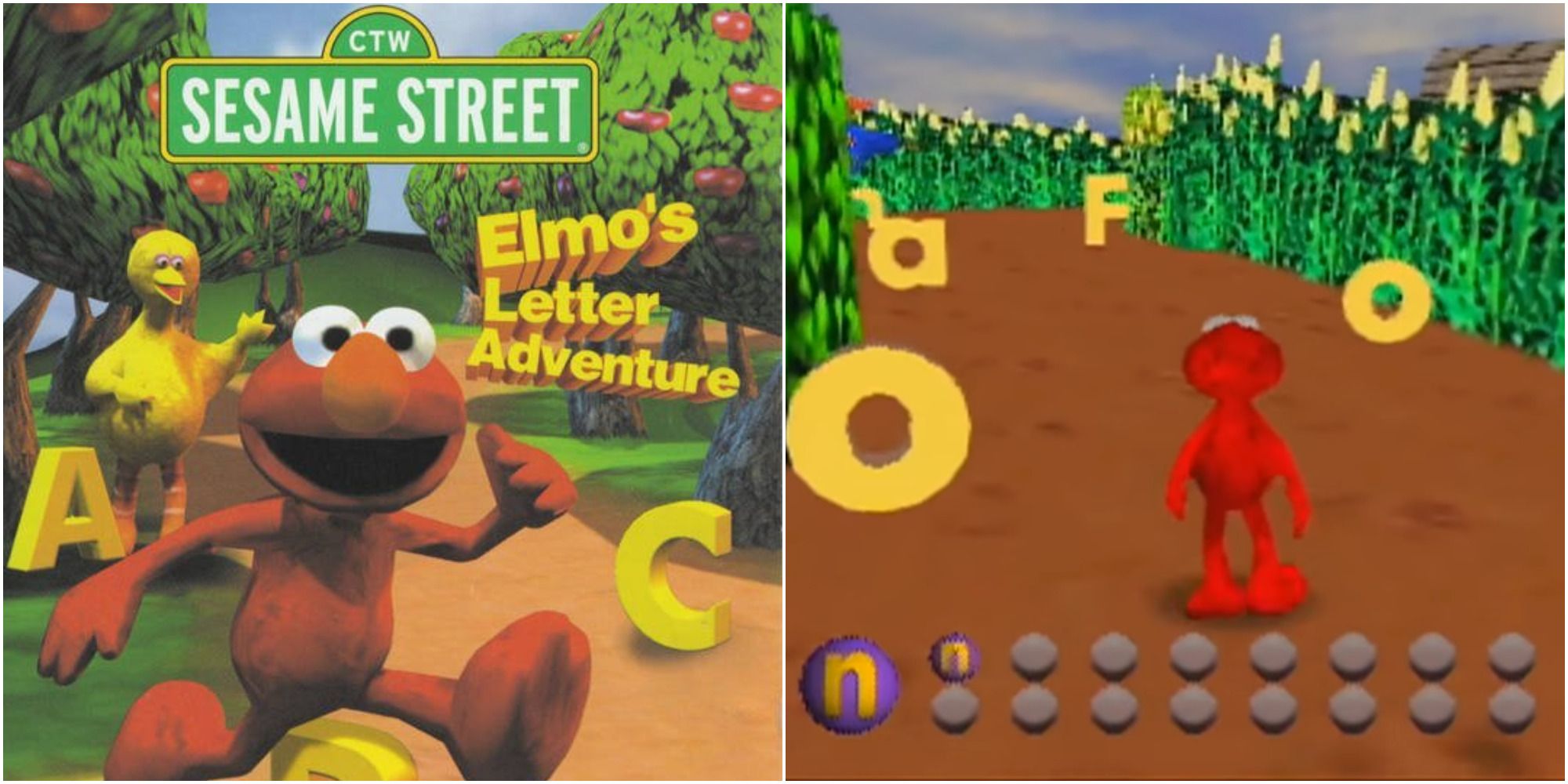 Elmo's Letter Adventure launched for the Nintendo 64 and the original PlayStation in 1999 and is the seventh game to primarily feature Elmo, likely due to his immense popularity in the late '90s, culminating in the infamous Tickle Me Elmo toy and the theatrical film The Adventures Of Elmo In Grouchland, the latter of which was released that same year and had its own pair of games for the Game Boy Color and PC.

Elmo's Letter Adventure has Elmo taking on different tasks assigned to him by other Sesame Street characters, all of which involve learning about the letters of the alphabet. 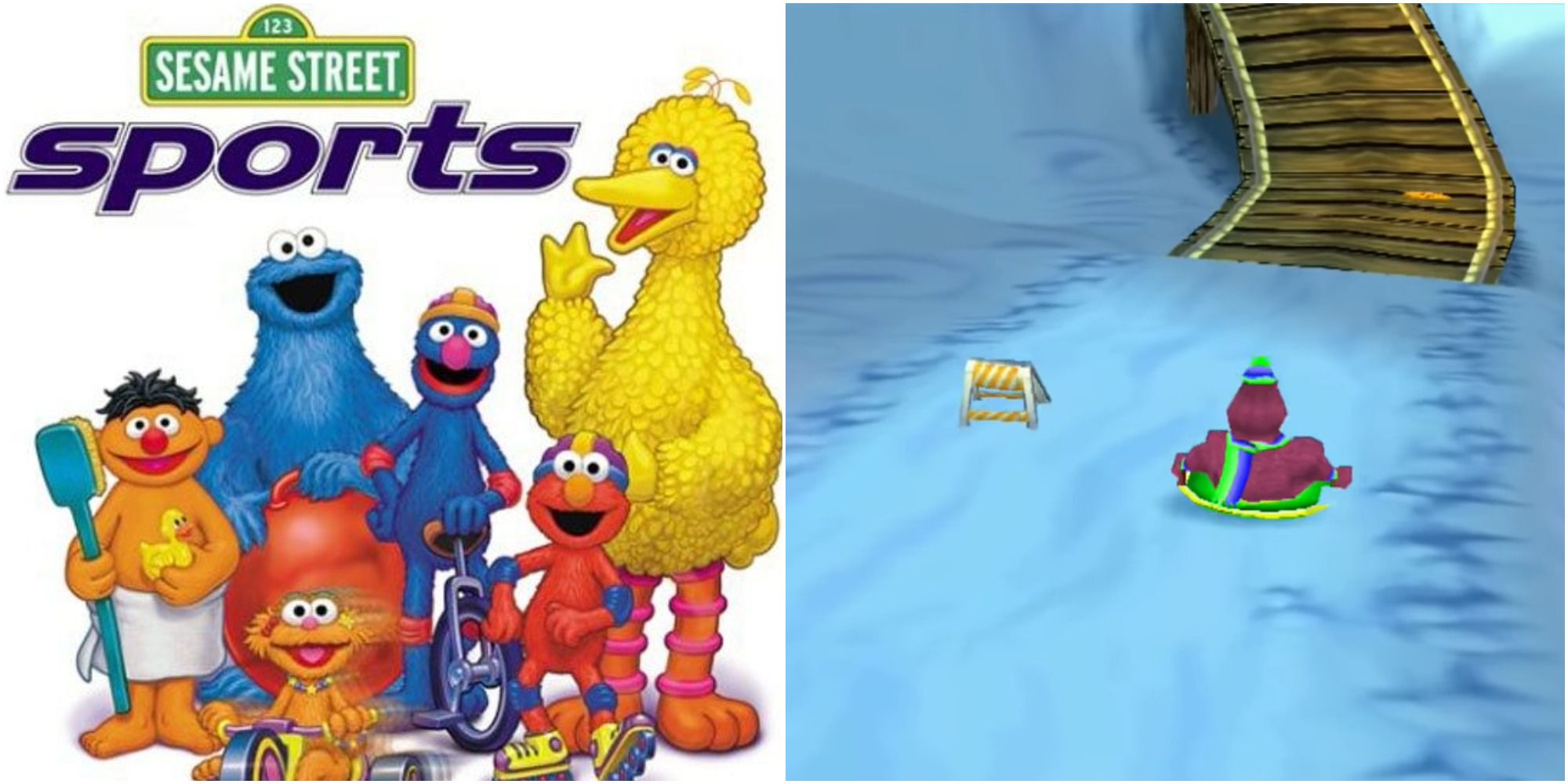 Sesame Street Sports launched for the Game Boy Color and the original PlayStation in 2001, and despite its title, it does not include any multiplayer modes or features. Instead of featuring different sports for each playable character, Sesame Street Sports is a racing game where each character has a different vehicle and two themed courses made for each of them.

Big Bird is not a playable character but is instead a commentator, while Telly is playable but was excluded from the game's cover. Even in one of the few games Telly appears in, he still gets the short end of the stick.

2 Once Upon A Monster 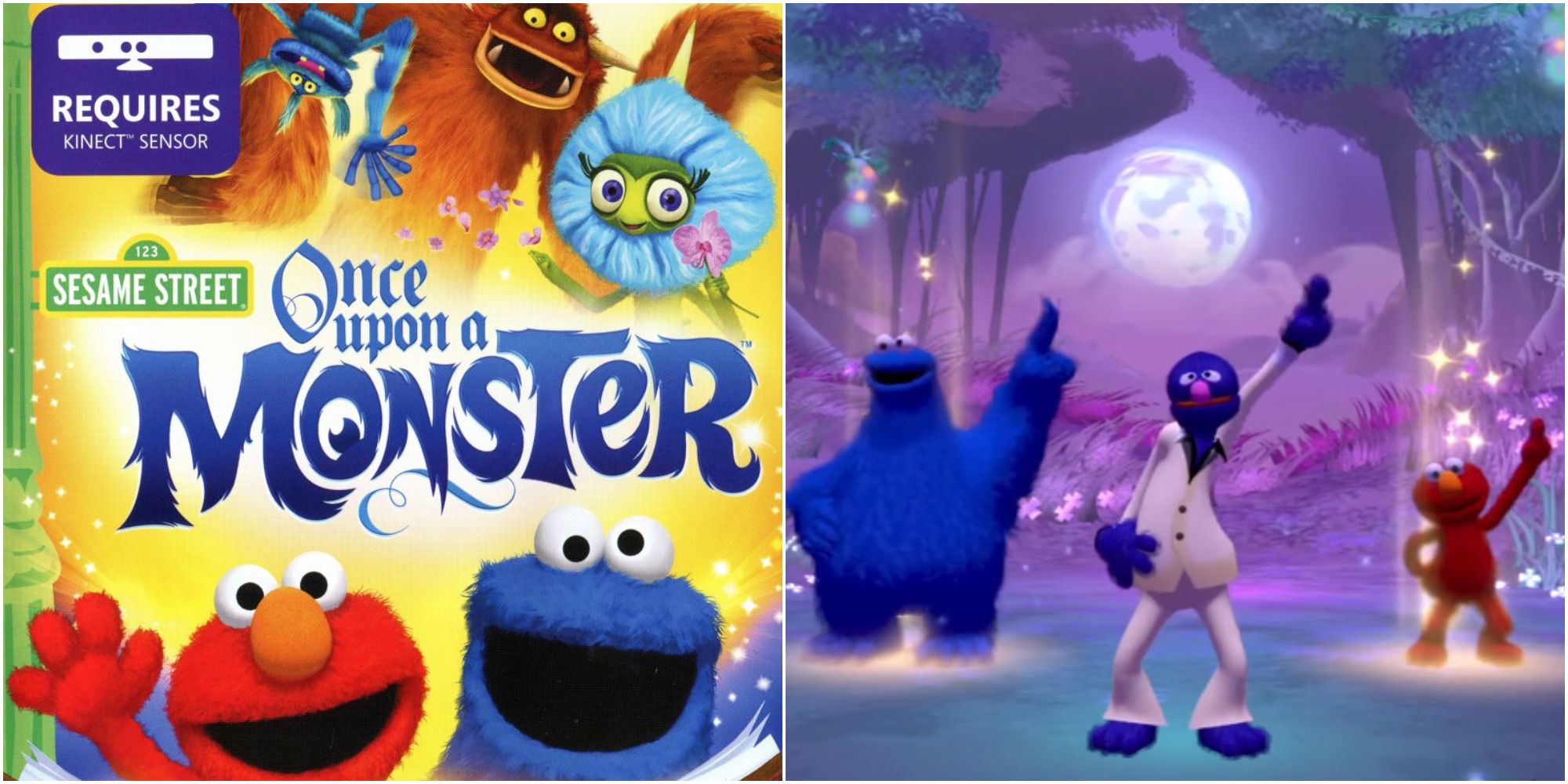 Sesame Street Once Upon A Monster was developed by Double Fine and launched for the Xbox 360 in 2011 and required a Kinect to play. Like many other licensed games made for the Kinect, Once Upon A Monster is a compilation of different mini-games, with different characters featured in each, while Elmo and Cookie Monster are playable.

In addition to featuring plenty of popular Sesame Street characters, Once Upon A Monster also introduces several game original characters who are all monsters that live in a magical book Elmo borrowed from the library. Although Once Upon A Monster is a licensed Kinect game, it was well-received, particularly by parents of young children. 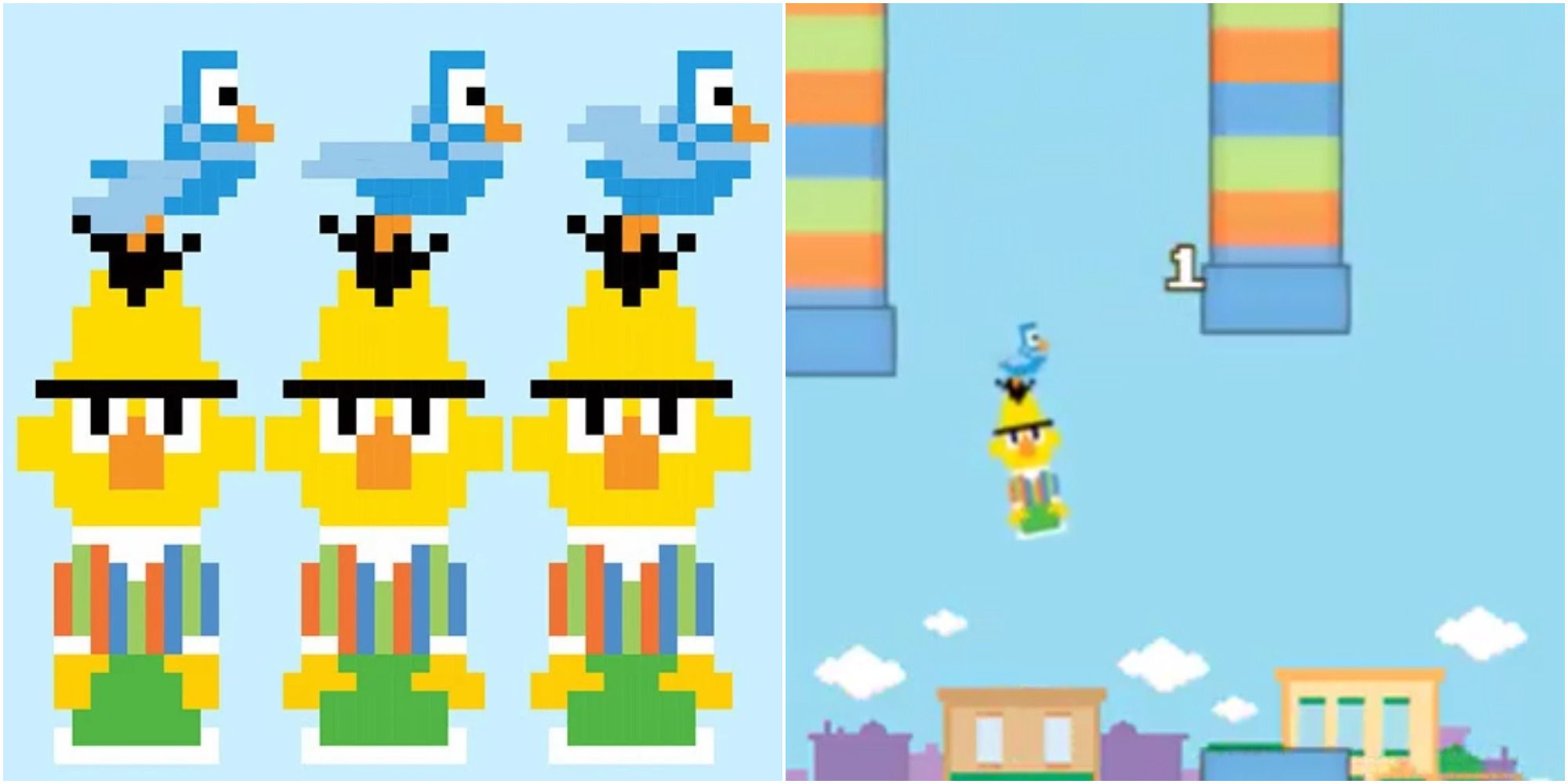 As one may be able to tell from its similar title, Flappy Bert is a Sesame Street-themed Flappy Bird clone and launched in 2014 for internet browsers right after Flappy Bird had been removed from mobile app stores.

The gameplay is essentially the same as Flappy Bird, with the player tapping the screen to avoid pipes of varying lengths while Bert is carried by his pet pigeon, Bernice. Unlike the majority of other games based on Sesame Street, Flappy Bert didn't provide any educational value, and like the game that inspired it, it is no longer officially available to play.