You are here:
Home / 10 Major Differences Between the PS4 and PS5 Versions of Assassin’s Creed: Valhalla

10 Major Differences Between the PS4 and PS5 Versions of Assassin’s Creed: Valhalla

Much as Assassin’s Creed IV: Black Flag was a highlight of the PS4/Xbox One launch, Ubisoft has once again bestowed a new AC title onto the next-generation systems. Taking players to Viking-era England and beyond, Assassin’s Creed: Valhalla has already smashed past franchise records on current-gen systems, with its gorgeous vistas and enormous world still looking great on older hardware.

Nonetheless, fans will be eager to see how the team has upgraded the title to take advantage of SSDs and the more capable GPU and CPUs. As Valhalla supports free cross-gen upgrades, current owners can rest easy enjoying the various improvements whilst keeping their saves (and money). Those who are still on the fence, however, will want to know what’s different between the PS4 and PS5 versions. 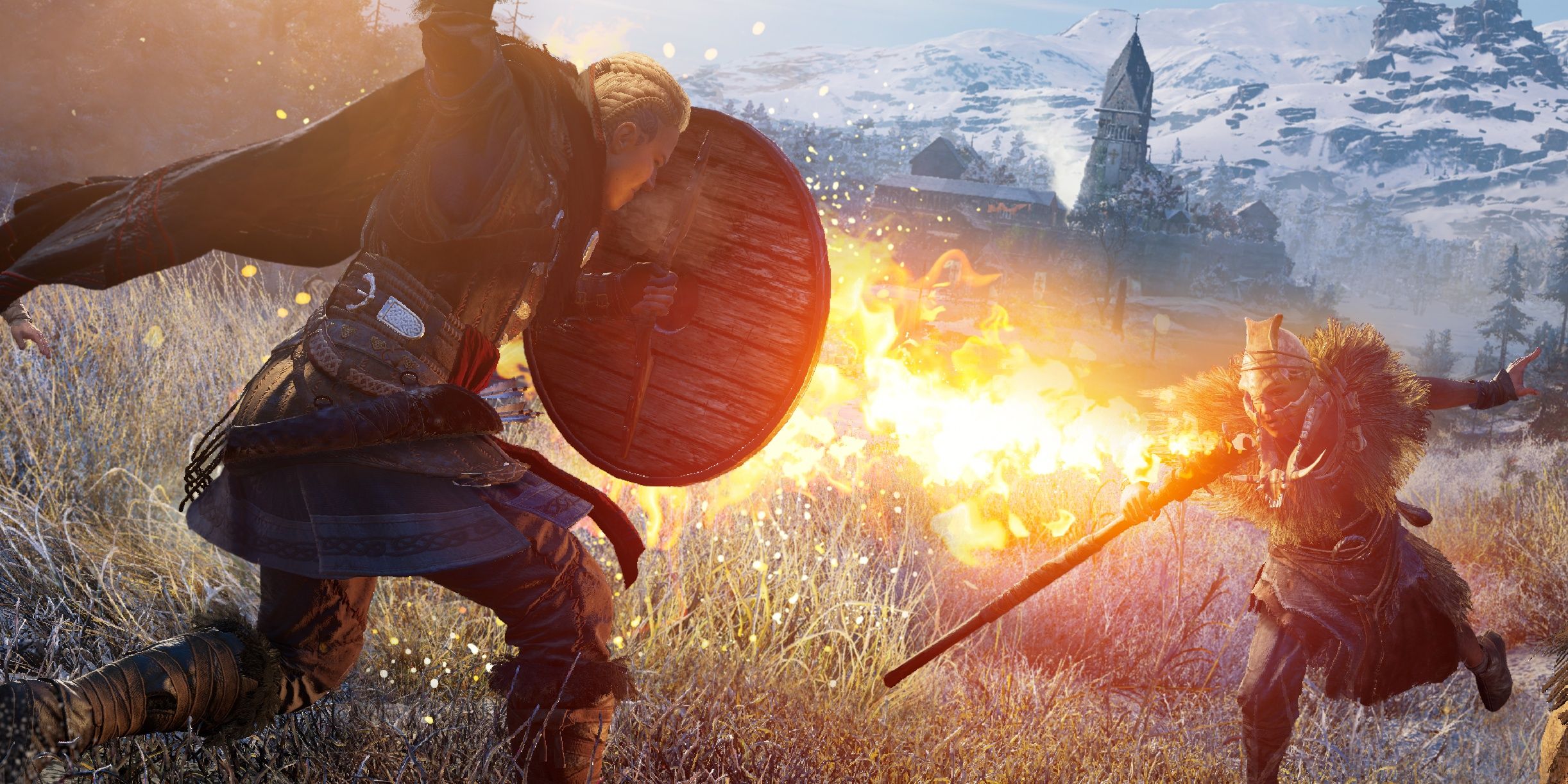 This one will be noticeable the moment you boot up Valhalla. Assassin’s Creed games traditionally run at a locked 30fps, but the PS5 version significantly boosts performance. The game now runs at a silky smooth 60fps in performance mode.

This naturally improves responsiveness in all areas: exploring the world, competing in a drinking challenge or raiding a monastery, for instance. Valhalla’s sluggish, heavy combat is completely transformed on PS5, still evoking the brutality expected of Viking warriors but with more style and fluidity than ever. Fingers crossed the franchise doesn’t abandon 60fps in the coming years. 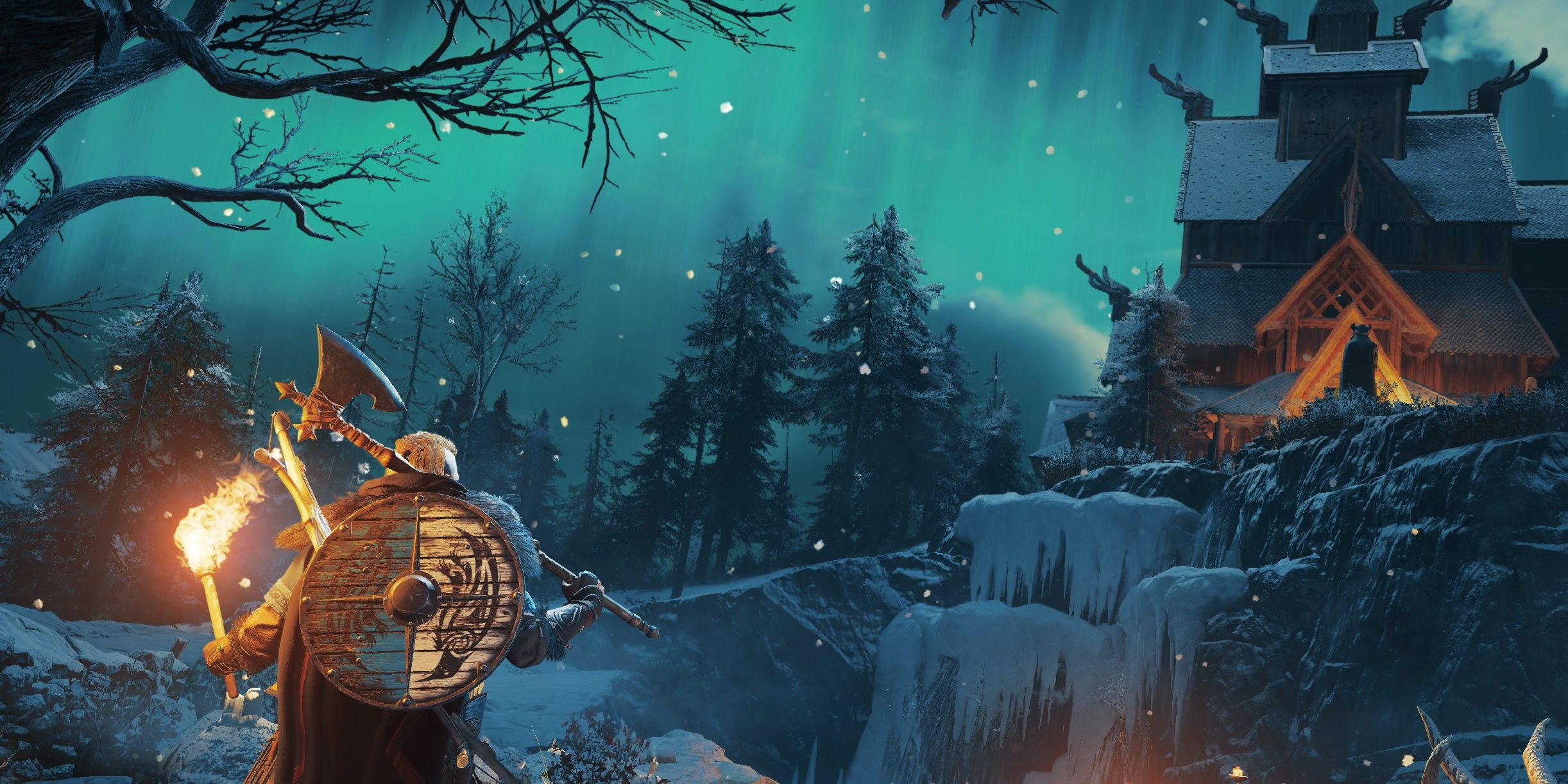 Here’s another change that appears obvious on paper but completely alters the experience when playing firsthand. Whilst the PS4 Pro version of Valhalla maxes out at 1400p (and spends most of its time below that number), the PS5 renders those beautiful English landscapes and Nordic tundras at a dynamic 4K.

This particularly accentuates the incredible work performed by Ubisoft’s environmental artists. Every blade of grass or settlement outpost looks crystal clear on PS5, further immersing you within Eivor’s tale to the very end. Even if you’re playing on a 1080p monitor, the downsampled image remains noticeably different to that of either base or PS4 Pro’s output. 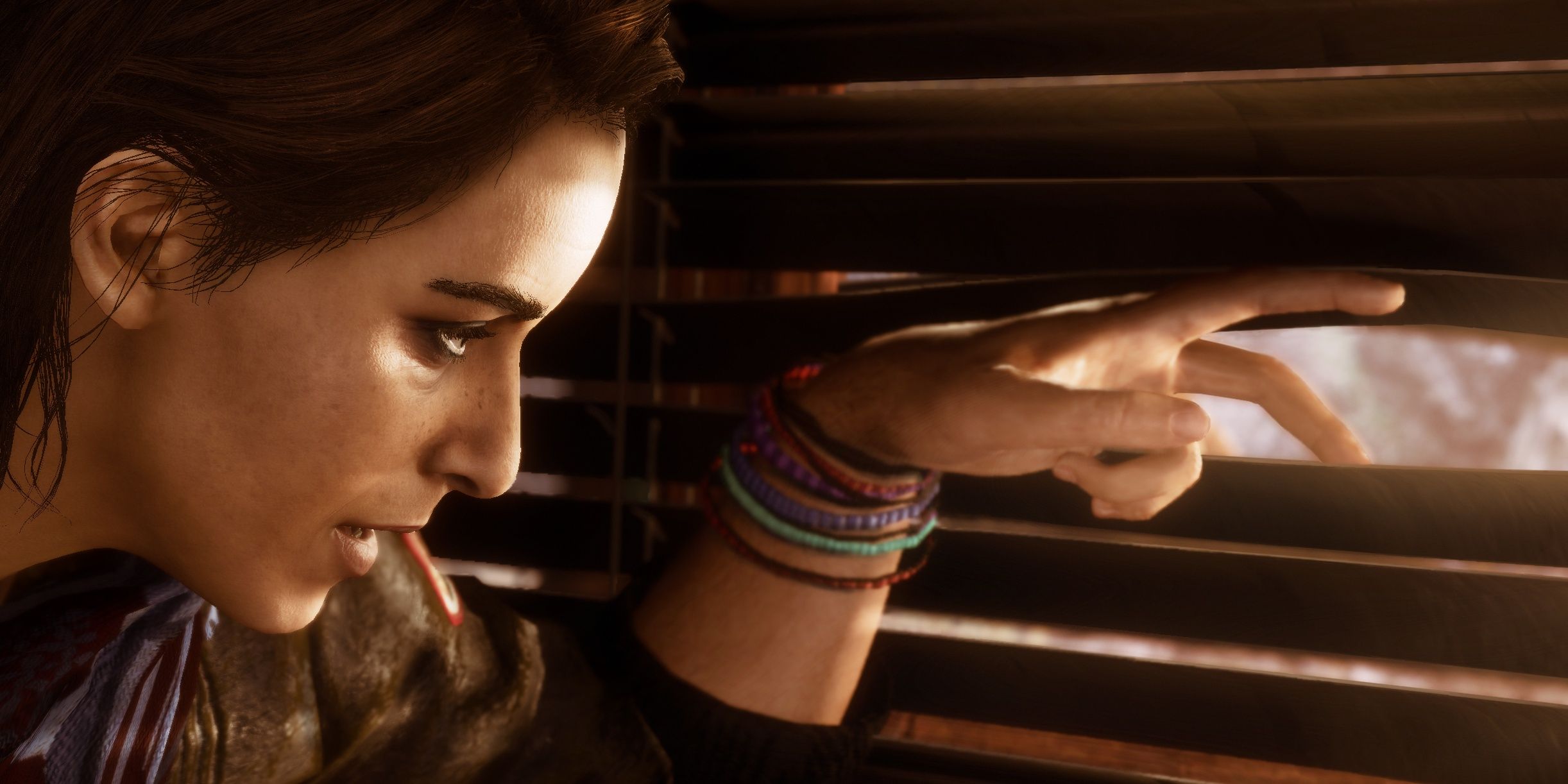 In cutscenes, the models of the game’s fascinating cast of characters often looked stiff and artificial on PS4, thanks to heavy aliasing and poor shadows. On PS5, they look more lifelike than ever, as does the world around them. Nowhere does this feel more apparent than in the opening Norway map with Ubisoft’s rendition of the aurora borealis – a natural landmark that is absolutely stunning on PS5. 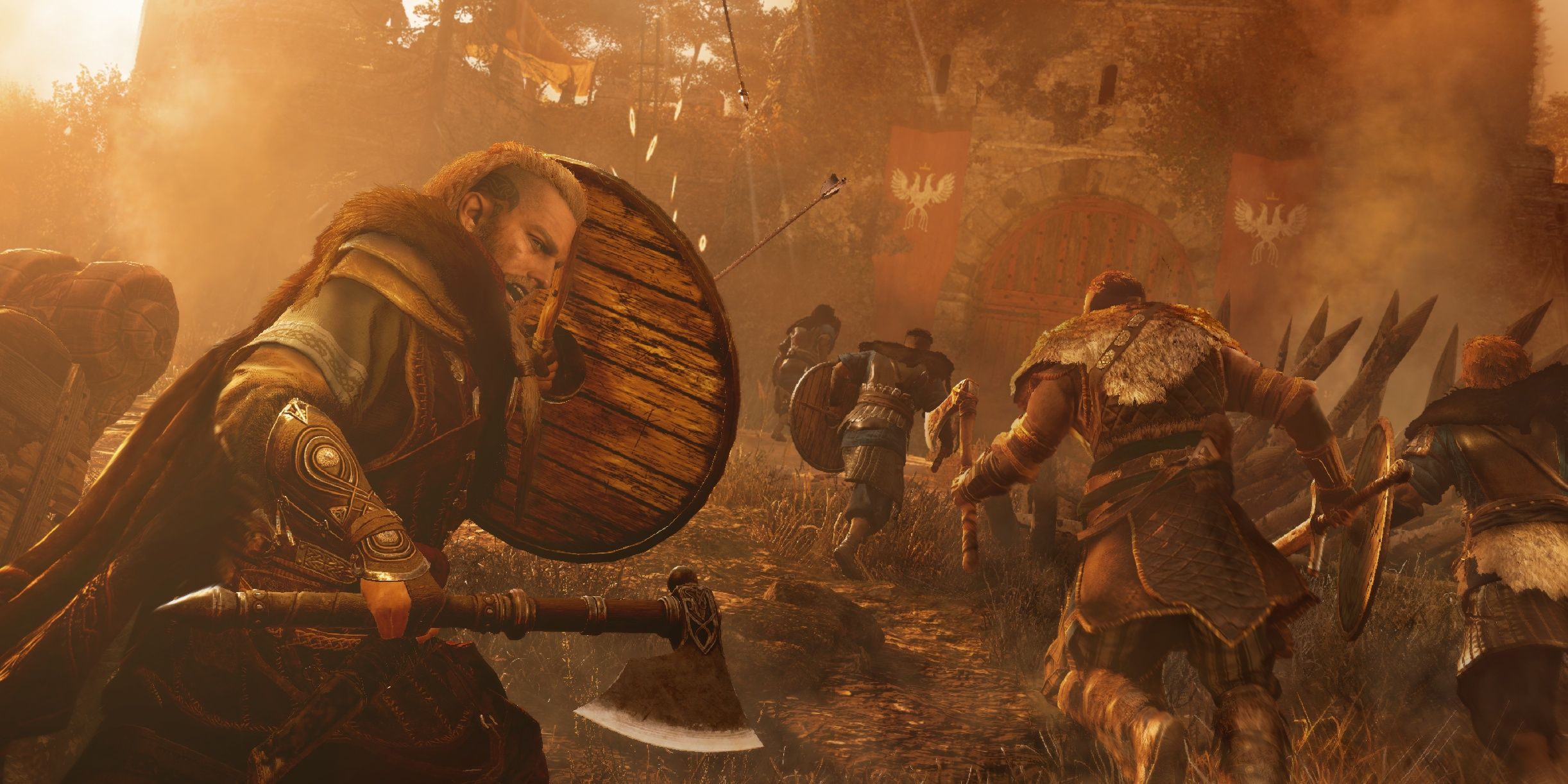 Prior to launch, one of Sony’s major selling points for the PS5 was its super-fast SSD, promising near-instantaneous loading times. In an enormous open-world game like Valhalla, PS4 load times on initial boot often surpassed two minutes. This issue is thankfully obsolete on PS5.

The first load into Valhalla’s world now only takes around 50 seconds on PS5, with fast travel living up to its name at roughly 11 seconds. Whilst it’s still not the fastest next-gen title out there, it is an enormous upgrade from the PS4 version, allowing you to spend more time fishing or winning bouts of Flyting. 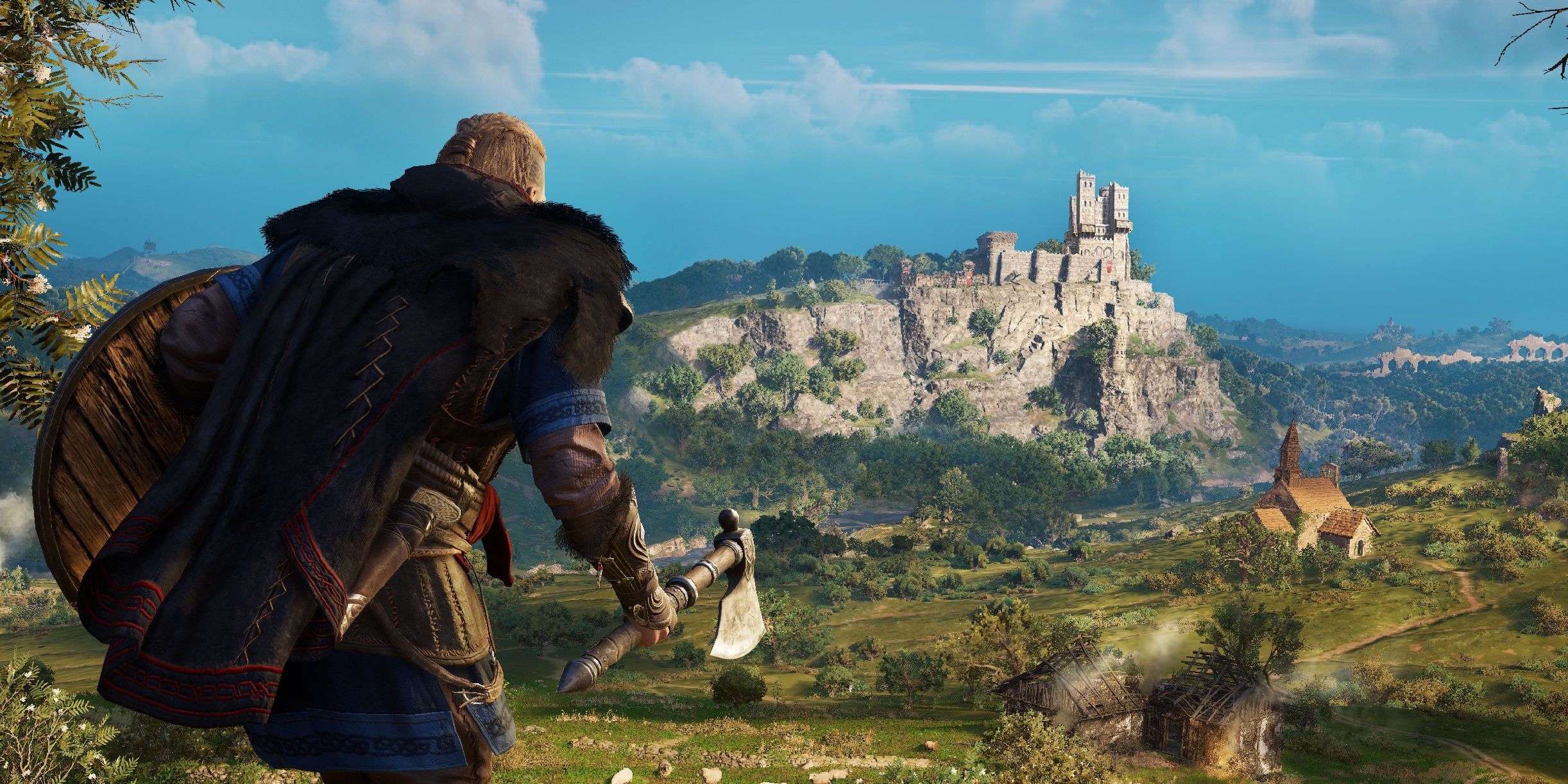 There is a way to boot into Valhalla even faster, all thanks to one of PS5’s underrated UI features. The implementation of Activity Cards (displayed in the game hub or by tapping the PS button) is fairly barebones in Valhalla. Nonetheless, they introduce a huge quality-of-life change.

Rather than tapping Play on a cold boot, entering the Activity Card for “Eivor’s Saga” sidesteps the opening logos and title screen, fast-tracking you to your most recent save state. This is a promising early use of the feature that will hopefully catch on as the generation continues. 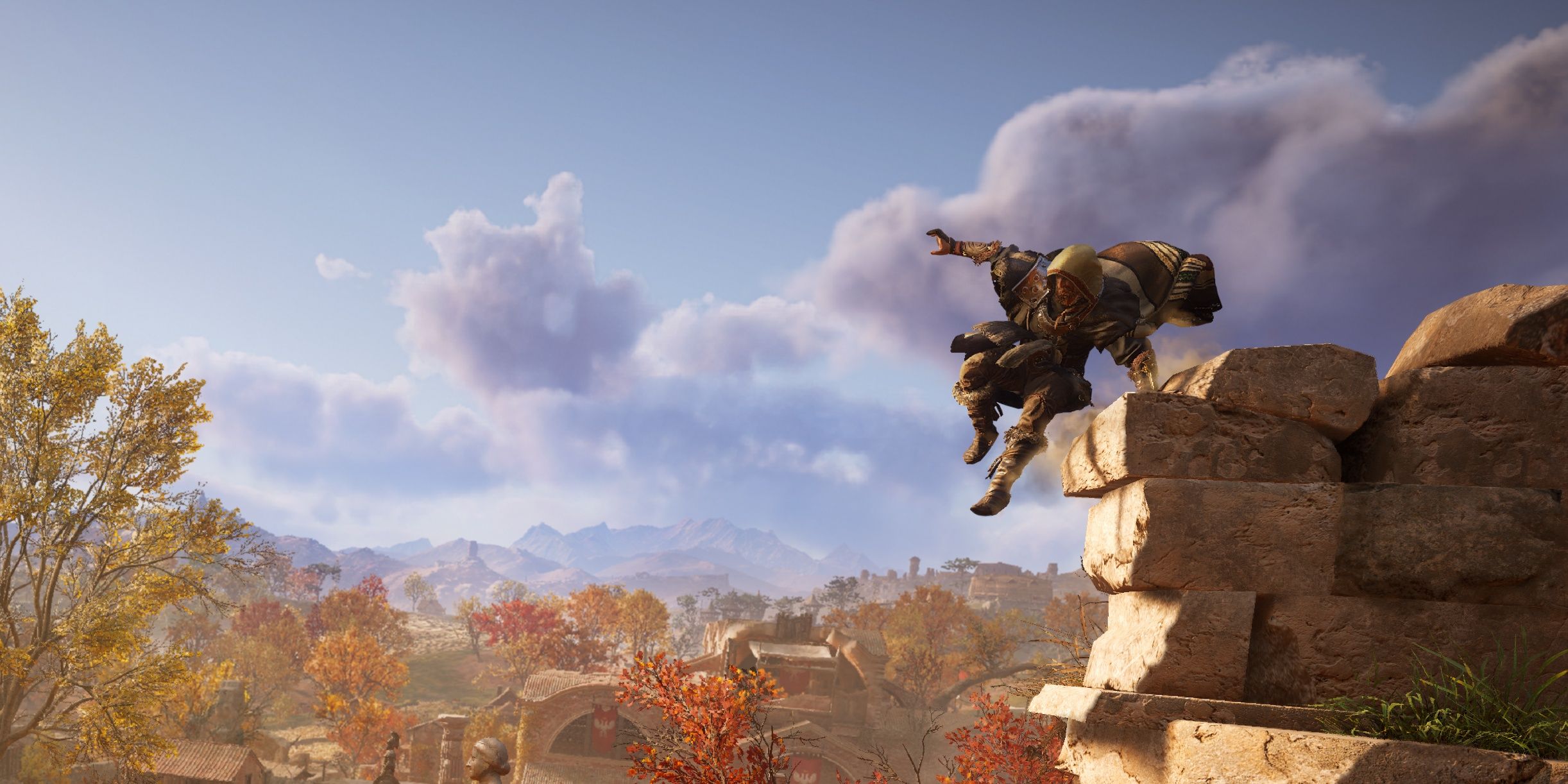 Tapping the PS button on PS5 doesn’t just bring up Activity Cards either, but also a lineup of relevant trophies. Given that Valhalla continues the franchise tradition of including massive numbers of collectibles and upgrades across the map, these quick trophy pop-ups are more crucial than ever.

Even better, some trophies now display specific progression statistics, informing you whether you need one more fantastic-looking tattoo design or ten. One downside for cross-gen players is that trophies don’t transfer from PS4 to PS5. If you’re planning on going for the Platinum, it might be best to hold off starting a new game until you’ve decided which version you want to spend 100+ hours on. 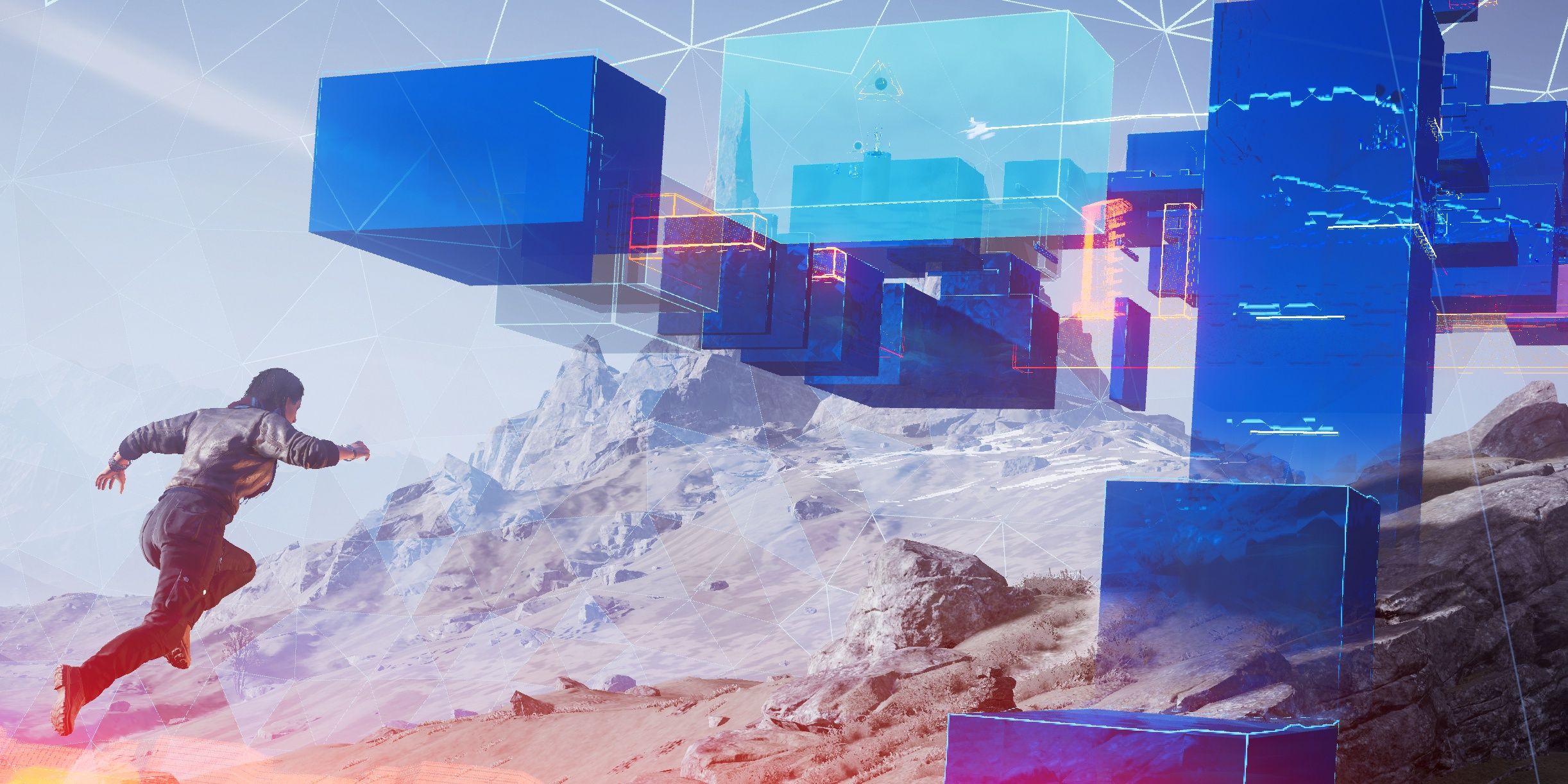 This one will come as a relief to practically anyone who played Valhalla on PS4. Whilst the PS5 version can’t shake off every bug, it’s certainly a more stable and immersive experience thanks to the more capable hardware.

The PS4 struggled to run Valhalla at a smooth frame rate. There were also other glitches and oddities, including longboats trapped on shore or NPCs falling through the map. On PS5, everything about Valhalla feels smoother and more responsive, a feeling that will inevitably improve with future patches. 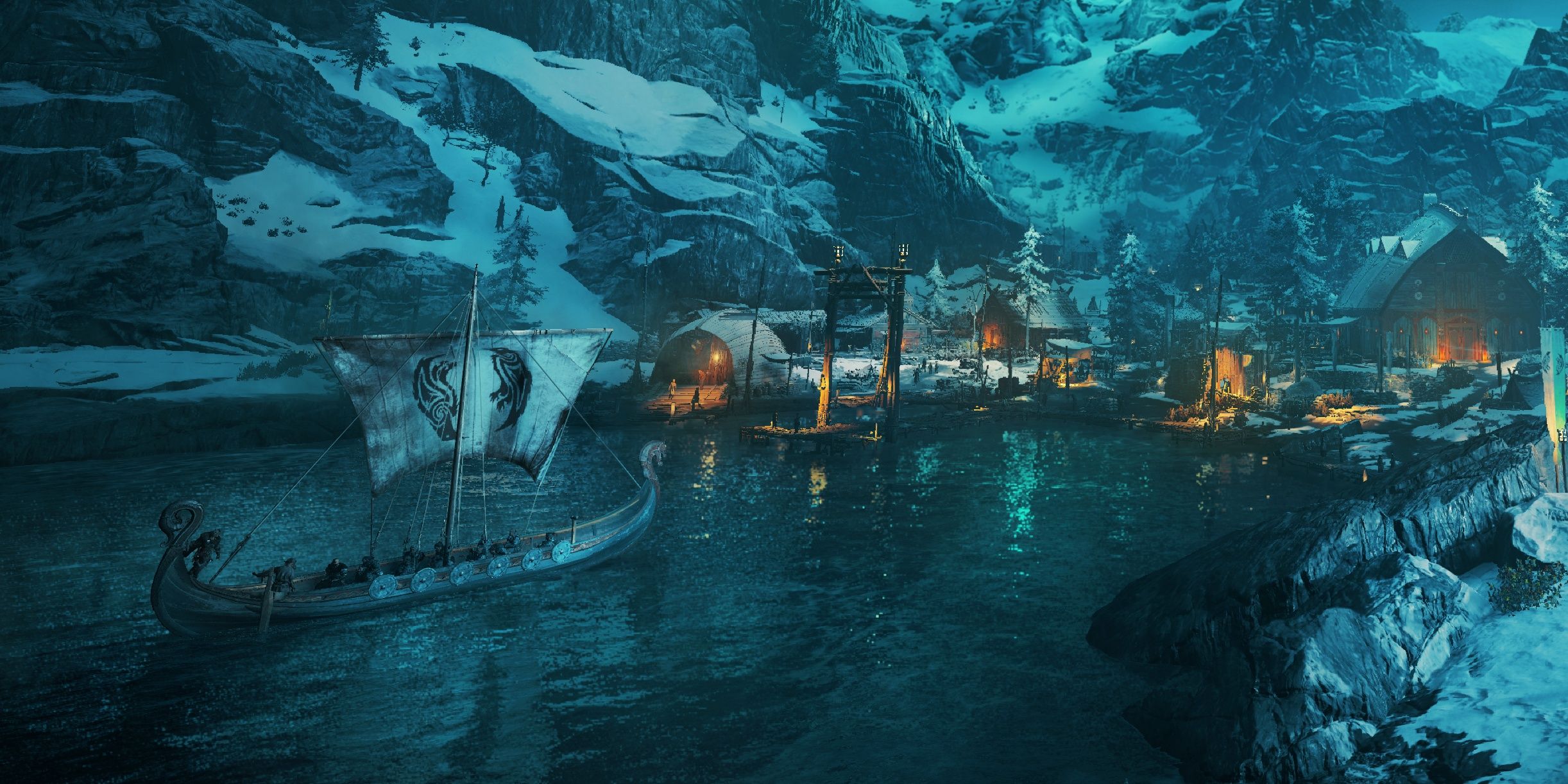 This is another example of how the PS5 version of Valhalla is automatically improved through the system’s built-in OS features. Whereas the PS4 version is restricted to 1080p clip sharing, the new Create button allows for 4K image and video capture at 60fps with HDR support.

In a game as frequently beautiful as Valhalla, this will no doubt appease avid montage creators and Photo Mode users. When used in tandem with the PS5’s new Share Factory Studio editing software, it’s never been easier to share amazing highlights of your conquests.

2 DualSense (In A Sense) 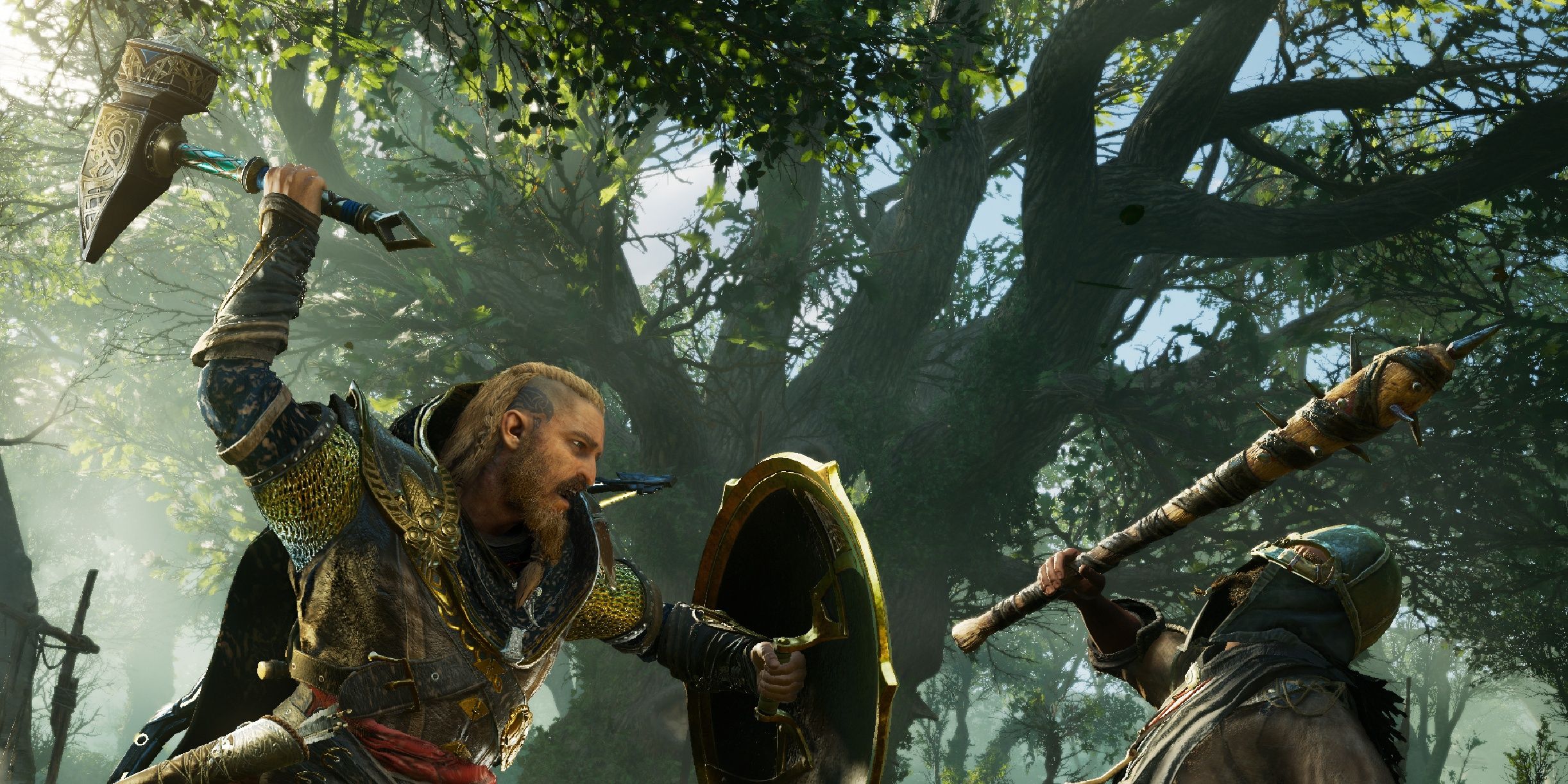 Yes, it’s obvious that the PS5 version lets you use the DualSense controller whilst the PS4 version is relegated to the DualShock 4. The caveat here is that whilst several games have implemented the DualSense’s unique features – haptic feedback and adaptive triggers in particular – Valhalla is lacking in this department.

However, it is not totally without merit. There are subtle vibrations when swimming or using certain weapons, although disappointingly no feedback when registering a hit in combat. Furthermore, there are a small number of Abilities that cause the triggers to intensely vibrate. The lack of any implementation when aiming Eivor’s bow is a glaring omission, however, so hopefully future instalments can put this right. 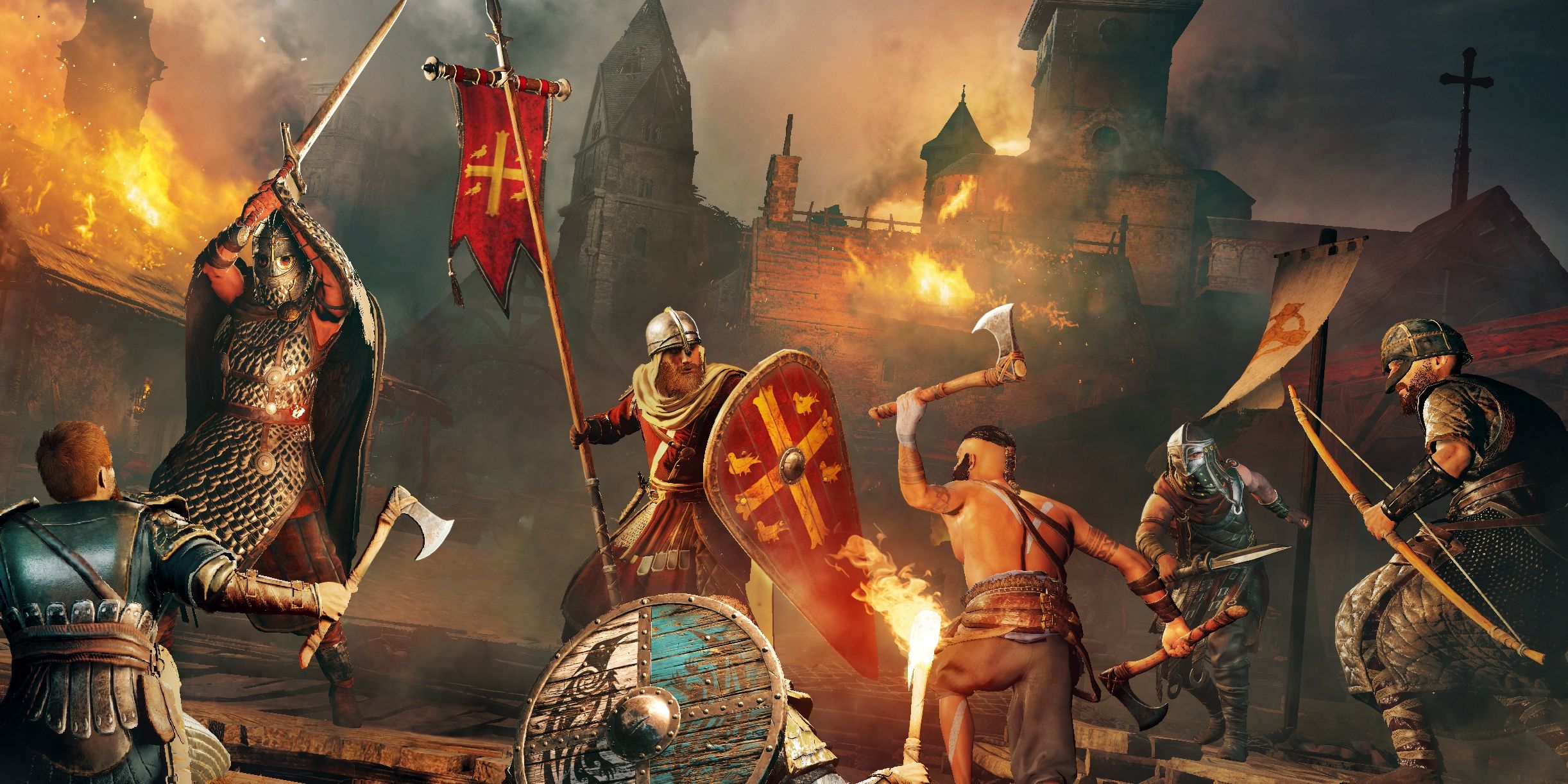 This one only works if you’re wearing headphones (although Sony promises TV/surround sound support in the future) but is absolutely worthwhile. Thanks to the PS5’s proprietary Tempest 3D Audio engine, Valhalla’s world and all of its audible flourishes completely surround you.

This also benefits gameplay: thanks to 3D Audio, you can actually hear the directions of approaching enemies and prepare. In a huge open-world game like Valhalla, next-gen technology like 3D Audio is a subtle but important factor in enhancing its realism.

NEXT: The 5 Best Things About Assassin’s Creed: Valhalla (& The 5 Worst) 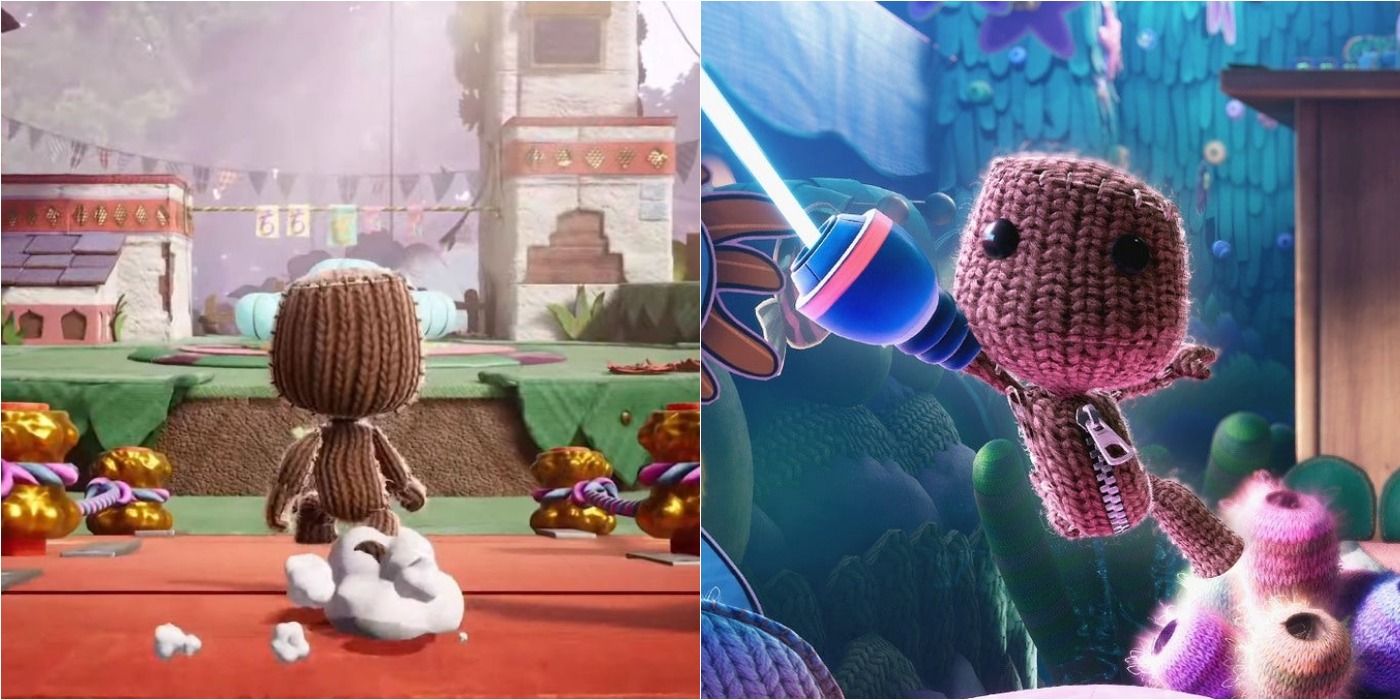