You are here:
Home / 10 Camping Spots To Watch Out For In CS:GO

10 Camping Spots To Watch Out For In CS:GO

Counter-Strike: Global Offensive is a methodical first-person shooter. You have to study its maps, know its angles, and make quick decisions if you want to prevail. This makes it very important to know where a camper might be hiding or how to use camping spots to your advantage.

A lot of players will often ridicule camping when they are on the receiving end. That should be no reason to give it up. It is a viable strategy that can reward you with kills or even a victory. Of course, if you know where to watch for a camper, you can clear these spots before they surprise you. 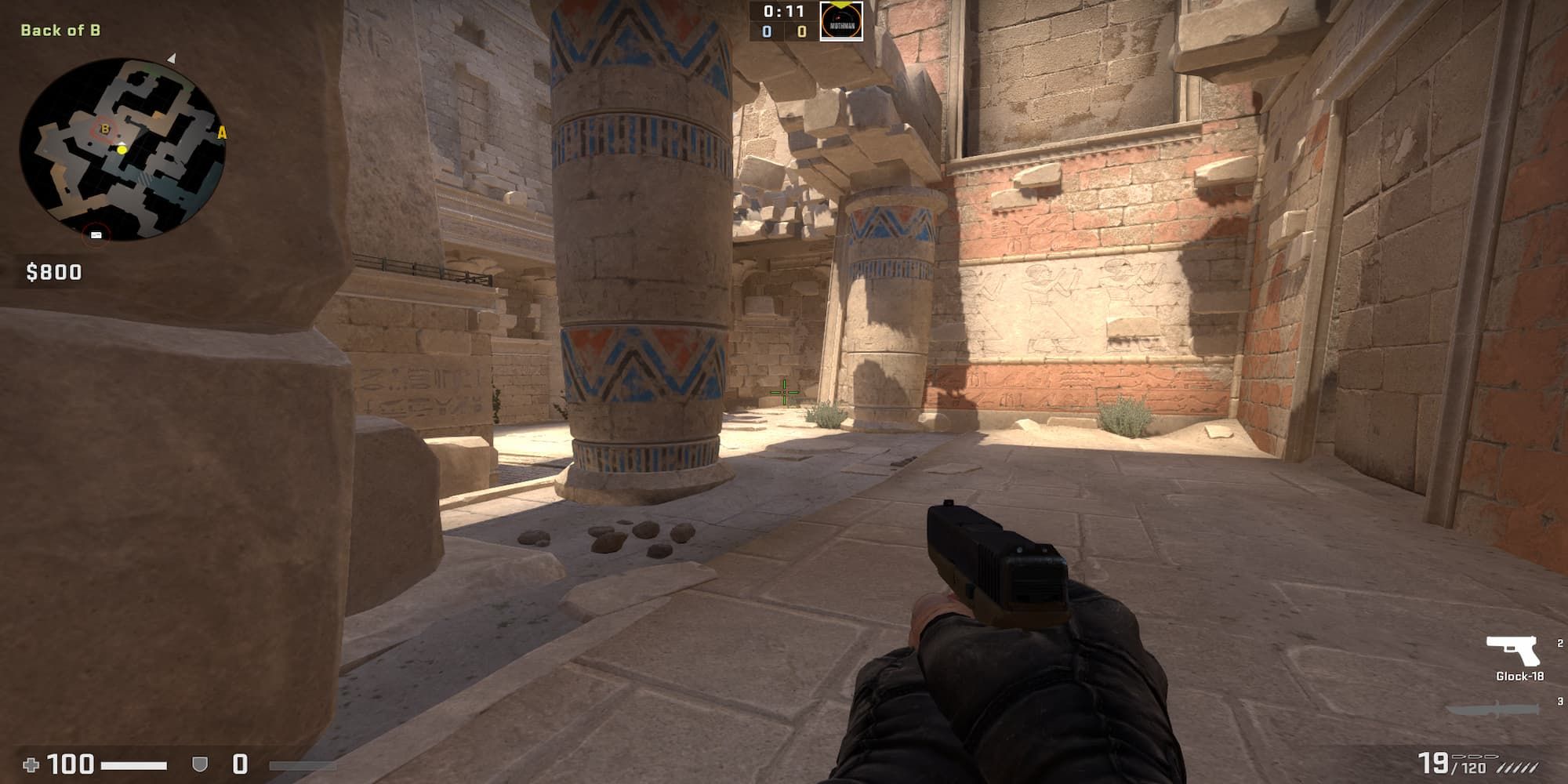 The Back of B location on the Anubis map is a great camping spot. It provides an overlook of the site itself and many of the paths to it. You can hop up into this area and put your back against the wall, knowing there isn't a way to sneak up behind you.

The best way to counter this if you notice an enemy has been camping there is with some equipment. Throw a frag there or smoke off the entire platform so they can't see. Then you can plant or rush them to catch them off guard. 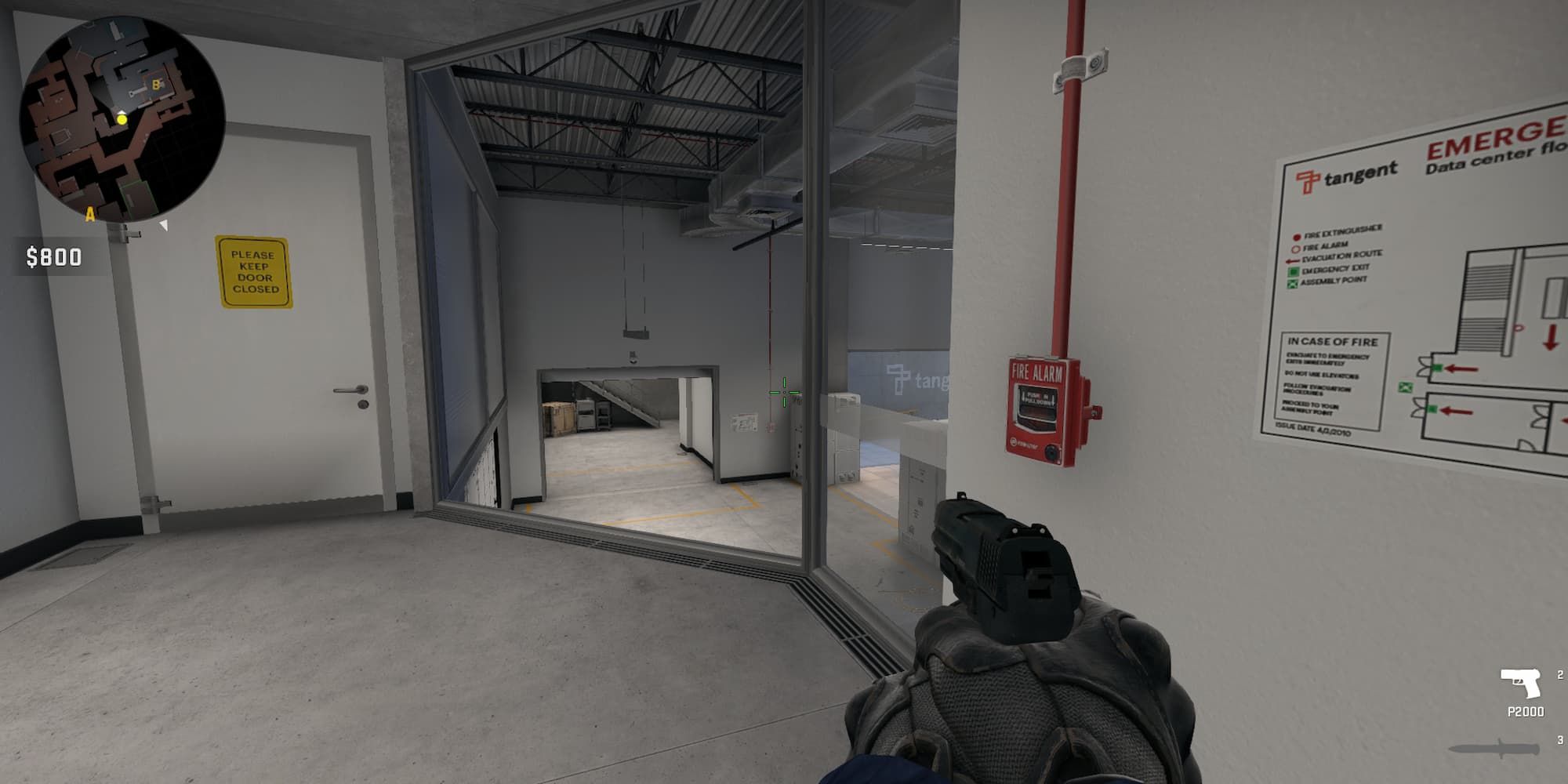 The Security Doors on Breach is a camping spot that gives control over the B Bombsite. It is also a good place to camp for a post-plant scenario. You may need to make some noise by shooting out the glass to reach it if you aren't coming from the front door, however.

If you're camping here, you'll want to pick a wall to hug. Either side gives an angle to peek at and protects you from most of the room below. It is a long journey to wrap around through the door to stop a camper here, so rely on your equipment and aim to take them out if an enemy is here. 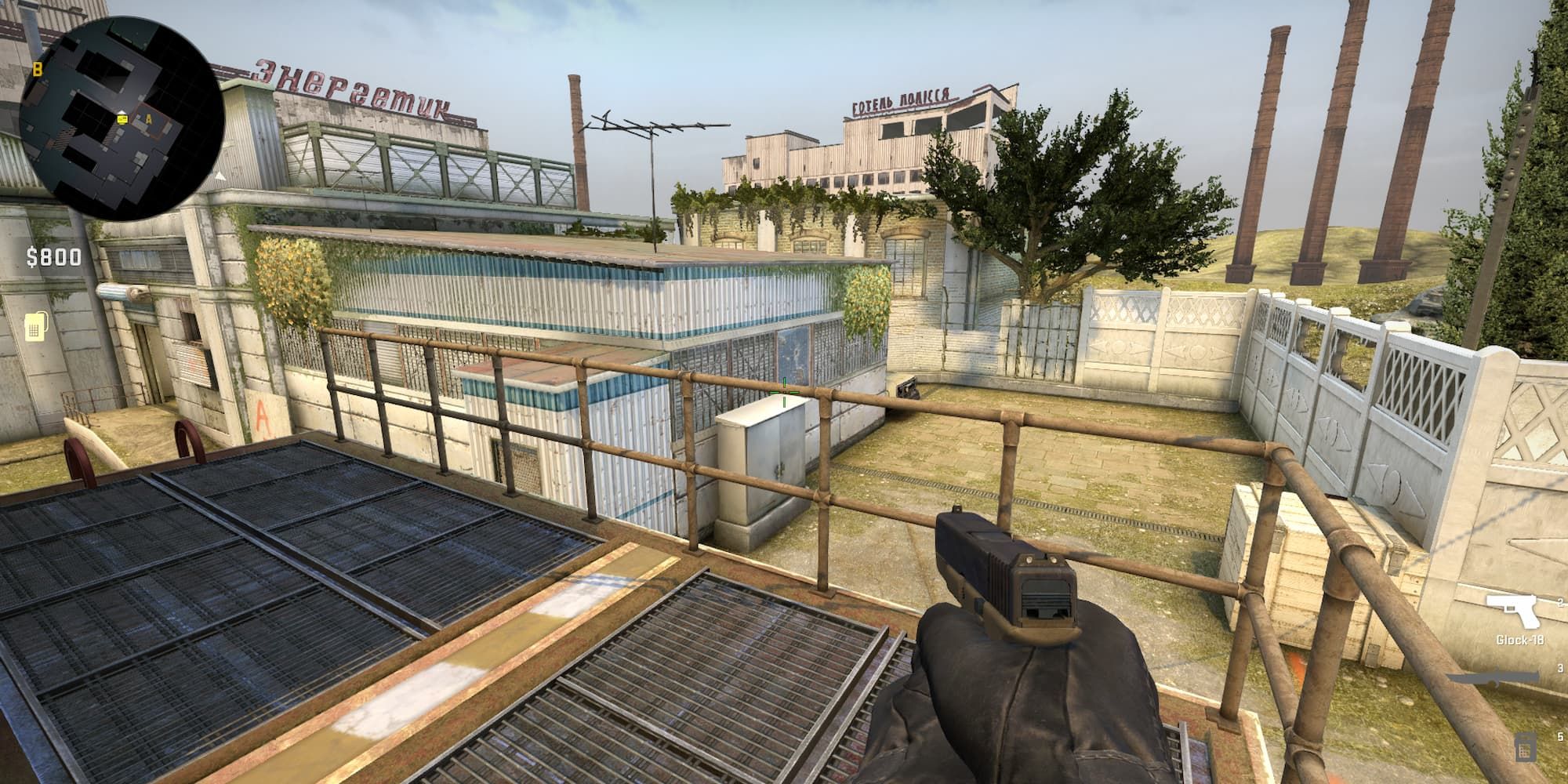 Taking the high ground in CS:GO allows for better positioning and provides an advantage in firefights. One of the better high-up spots in the game is the Catwalk on Cache. You can climb a ladder to get there to keep your eyes on A Bombsite.

You are able to camp here on the L-shaped catwalk to protect the site or peek out at the different lanes that approach it. If the enemy is the one camping here, you'll have to hope they're looking down the opposite lane than the one you choose, so you can get your shot off first. 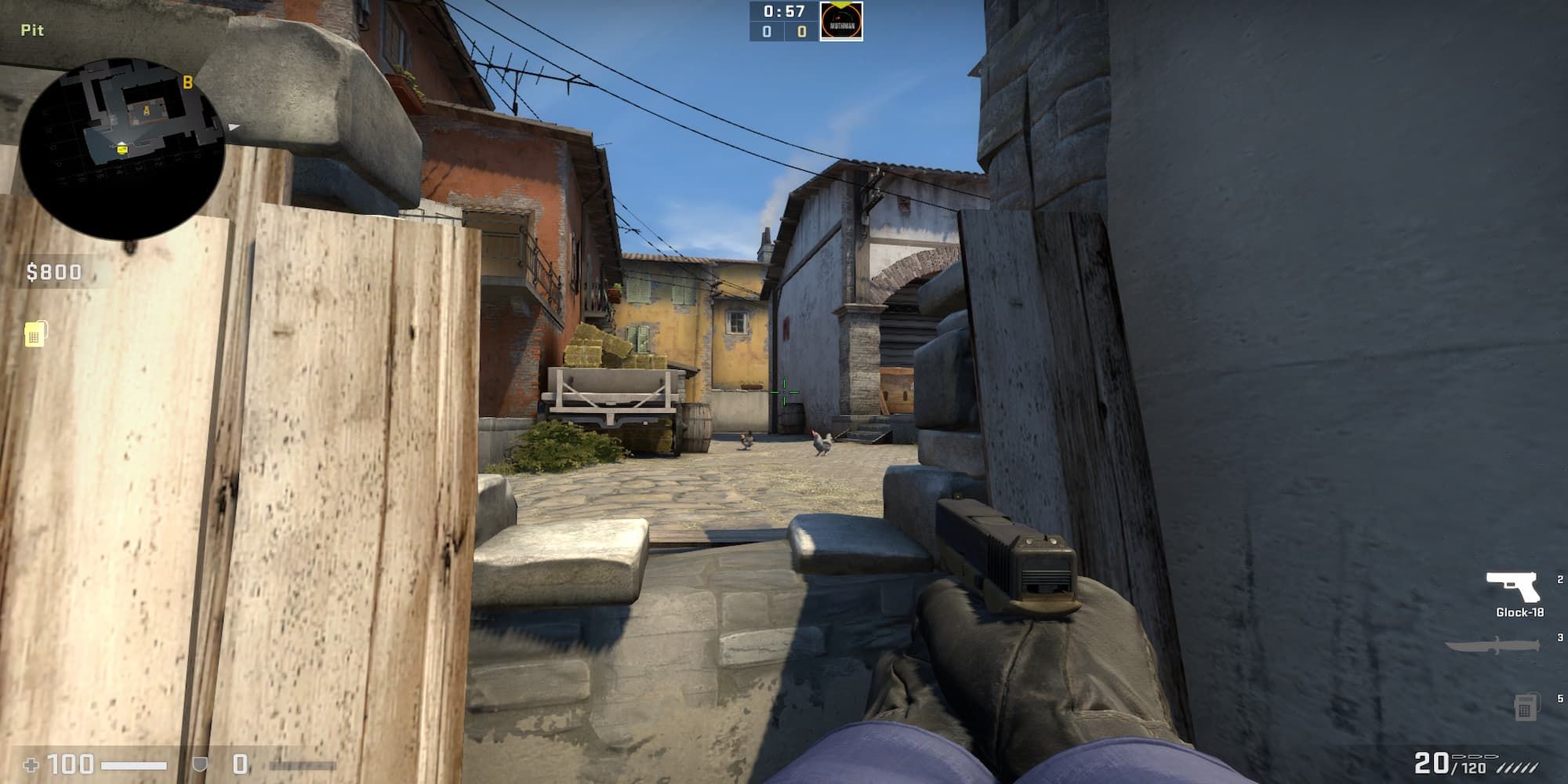 In the farthest corner of Inferno sits the Pit. This is near the A Bombsite, and there's no way to flank around it. This makes it easy for you to pick off anyone coming to the site, but it also means it is hard for you to escape.

In a game of CS:GO, you'll want to choose your camping spots carefully. This is one that may work a couple of times, but don't rely on it every single round. Make the most of it while you can, because the opposing team will surely be sending frag grenades and pushing it with multiple players if you continue causing them trouble. 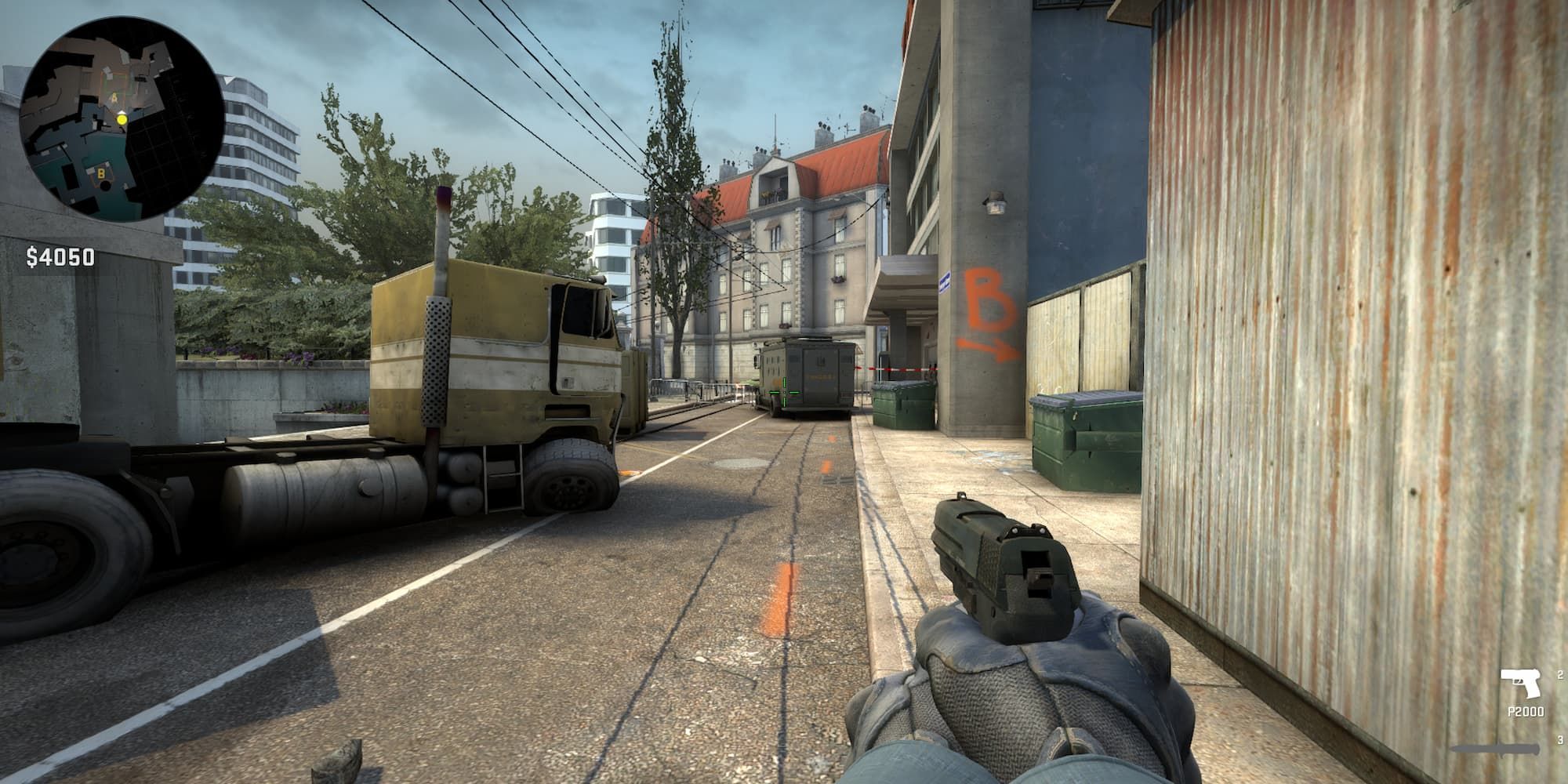 Overpass has a lot of twists and turns in its map design. Not many of its corridors and rooms can be camped well, though. If you are looking for a solid camping spot on the map, you'll want to position yourself on the corner of the street. It is next to the broken-down semi-truck near the A Bombsite.

You can move back and forth from the truck to the wall. This will give you a variety of cover from different areas where enemies may approach. Make sure the rest of the team is covering the other parts of the map because this only gets the job done if the other team is making a push towards A. 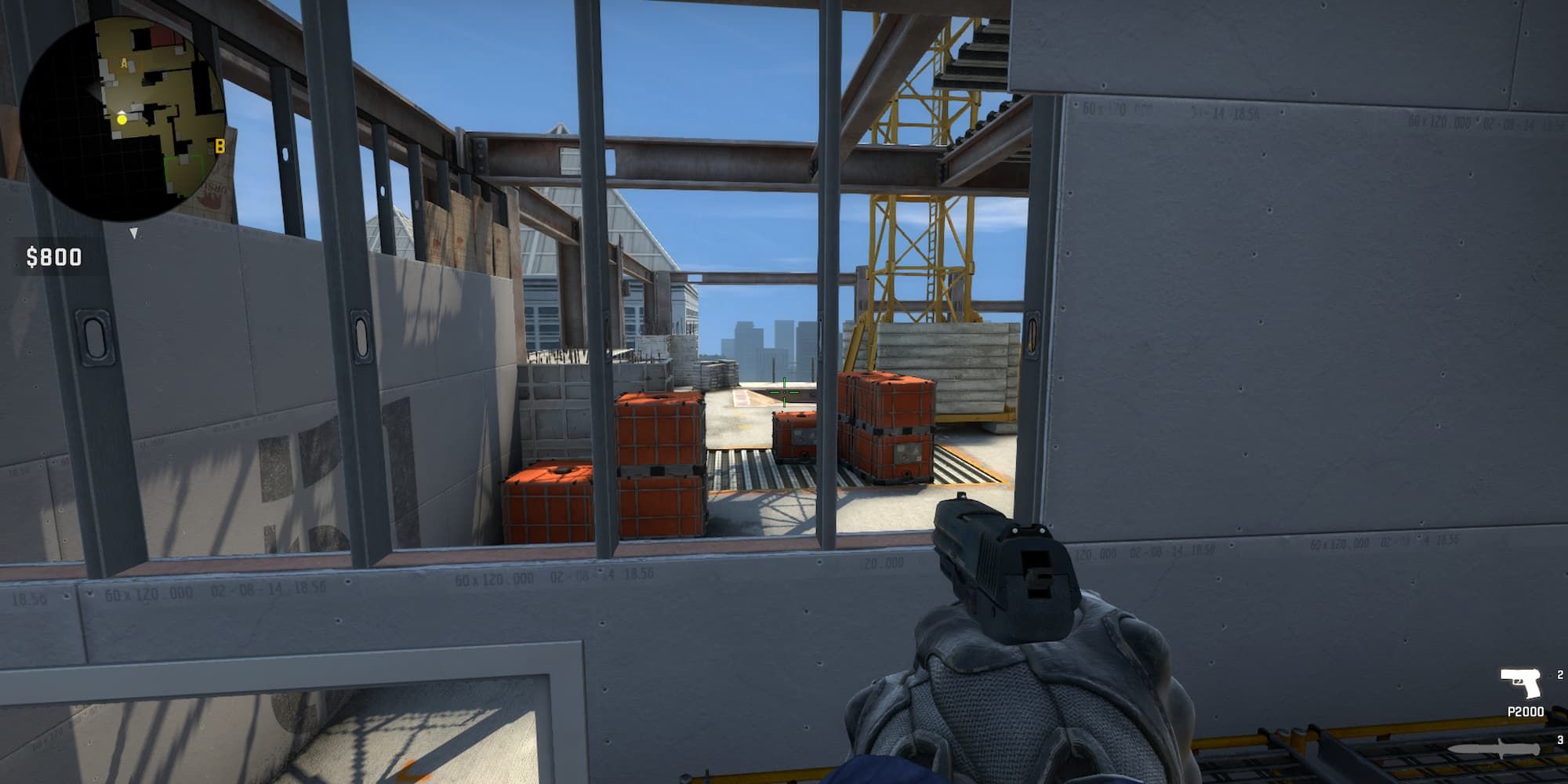 The map location known as Back of A on Vertigo is a tricky camping spot to reach, but it is definitely worth it in the early rounds of a CS:GO match. You'll want to head to the Back of A area and crouch jump onto the boxes near the short scaffolding. Then you'll have an awesome view of A Bombsite.

You will need to peek wide to see the entire site and if you don't, the enemy team can sneak through and wrap around to flank you. It is an ideal high-ground spot, though it can be countered by simply hiding behind the various boxes or going to B. 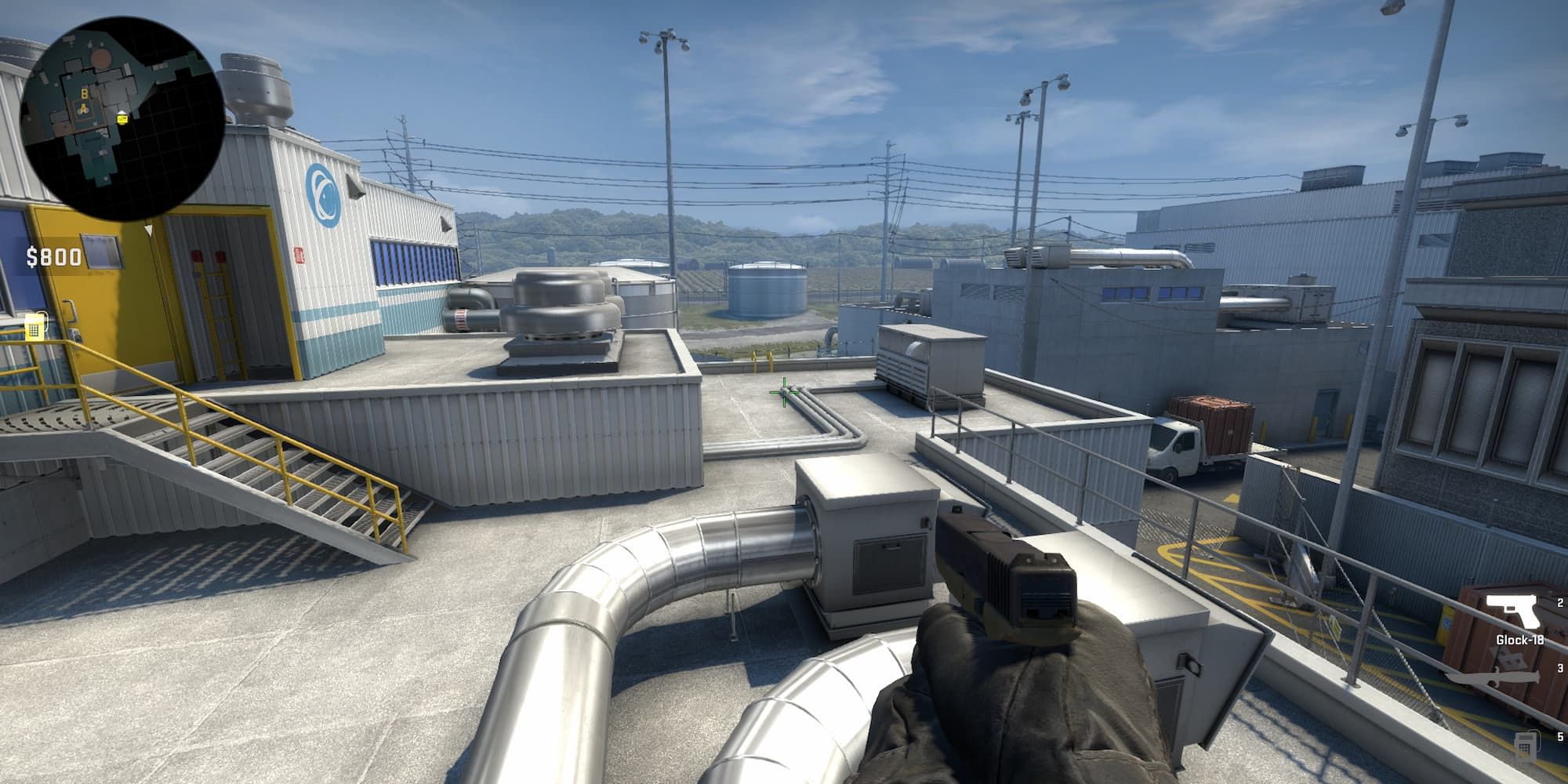 Nuke is a map with many sharp corners that you can hide around. Those don't provide nearly as much fun of a camping spot as the Roof does. It doesn't overlook any of the sites; most of the time, so you don't expect someone to be here. That's what makes it dangerous.

If someone is rotating around the outside of the building, they might try to climb onto the roof. They'll regret it when you're waiting for them at the top. Just avoid the area if you can't get there first, as an enemy may take up residence there. It might not provide ample kill opportunities, but intel, such as a potential flank and the sound of footsteps, is invaluable from this position. 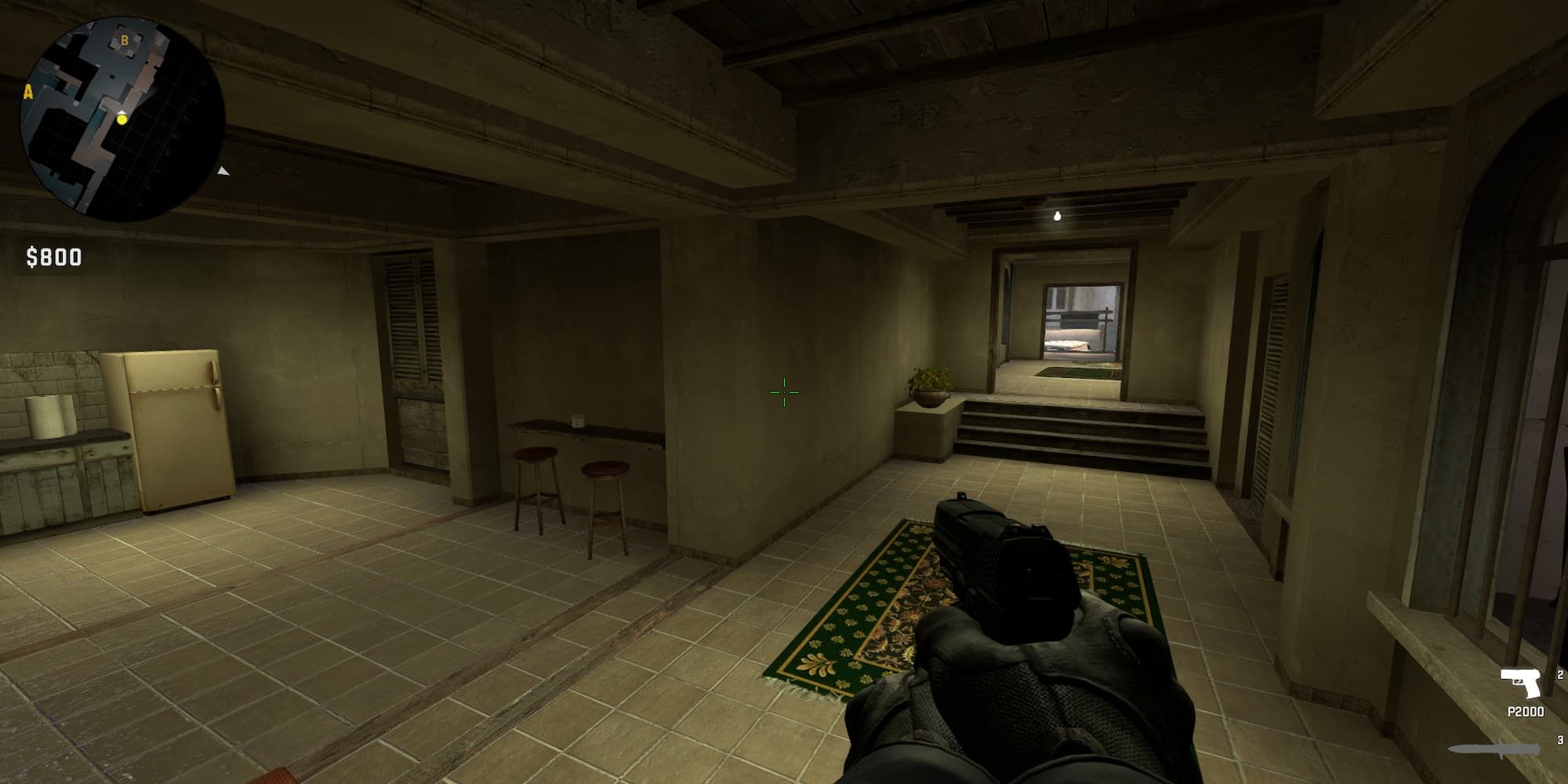 Mirage is one of the most popular CS:GO maps. This makes for a lot of sneaky spots players have learned over the years. One, in particular, that is very obvious is the Apartments area. No one expects someone to be camping in a spot you pass through quite often.

From Apartments, you can sit in a corner and wait for someone to walk by, or you can take a look at the B Site from its exit. Just don't get caught looking away when an enemy decides to travel through the building. This is one of the rare spots where having a second camper might help to watch the other entrance. 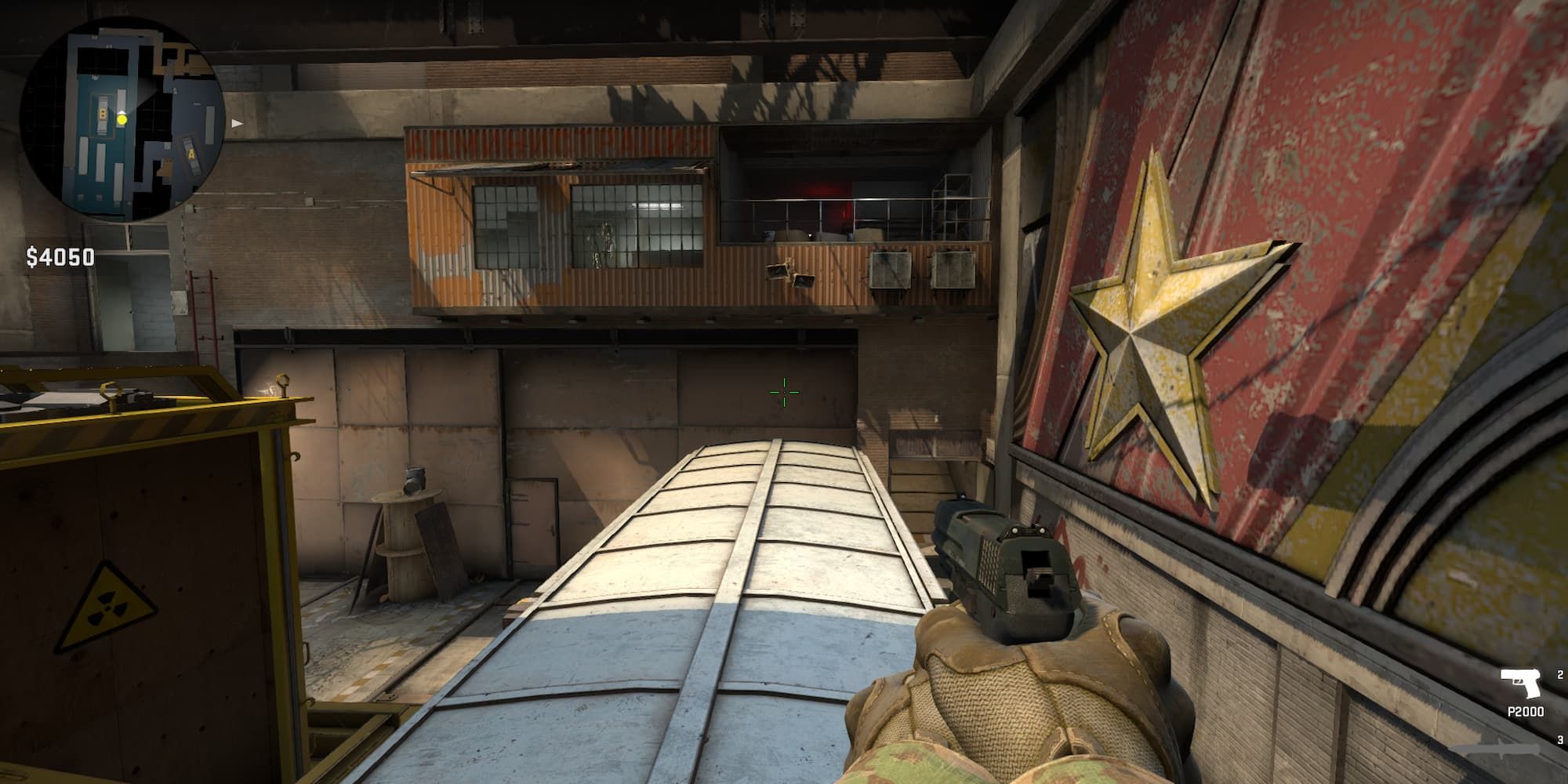 The majority of high-ground camping spots in CS: GO are those that nobody ever thinks of checking. This will never be more apparent than the B Site on Train. You can climb onto a train car and hop across to the tops of several others, making for multiple spots to sit in one area.

Most players will have their crosshair at the height of your head at the ground level. If they walk into the B Site area, it will be very difficult for them to flick their aim upwards at you on a train car. Unfortunately, this goes both ways. 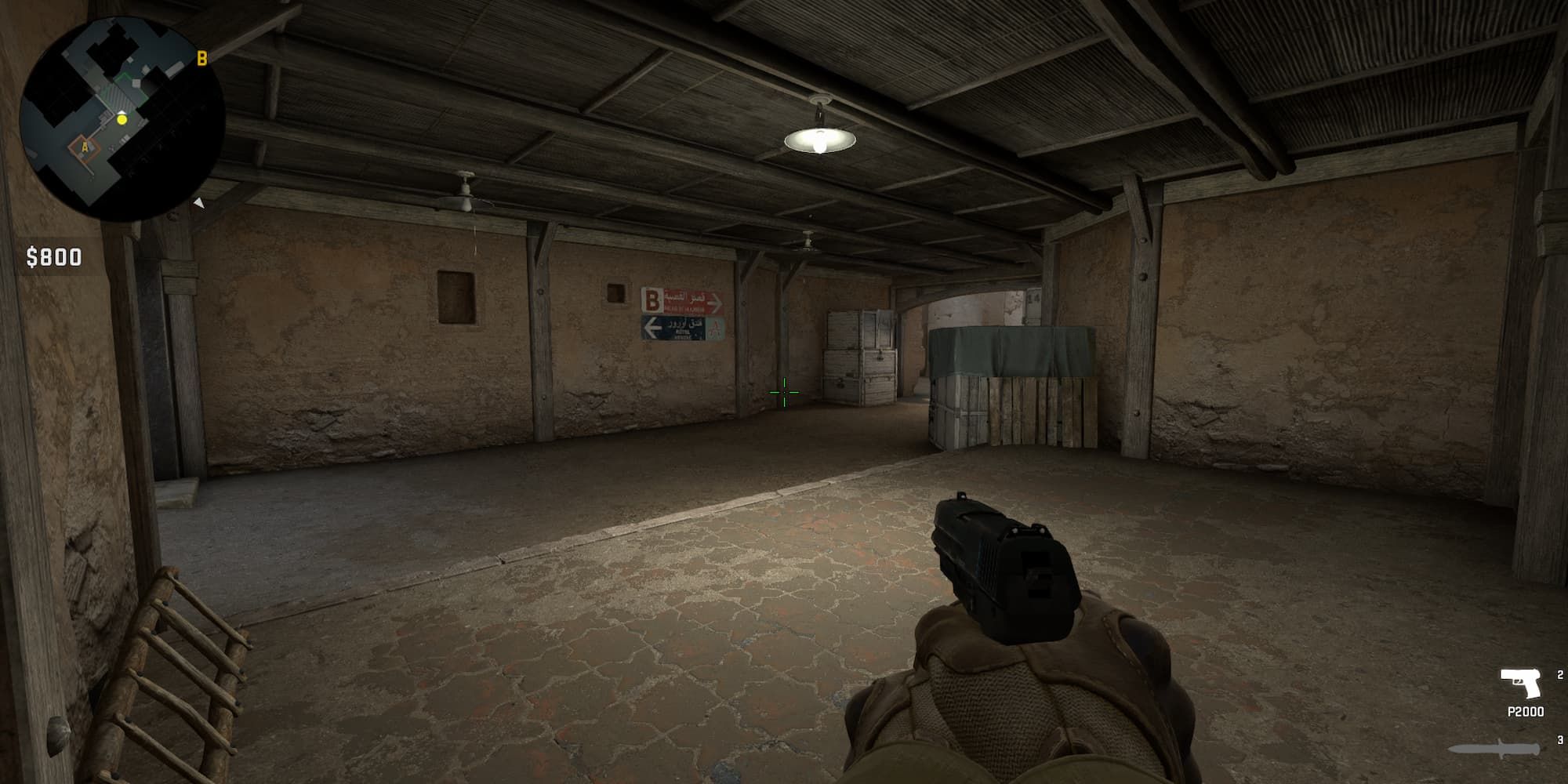 Dust 2 is an iconic Counter-Strike: Global Offensive map. It is perhaps the most well-known map in the franchise and home to one of the game's most-camped locations. This would be the CT Start area, where the counter-terrorist team spawns.

It allows you to see pathways to both A and B right from your spawn. And if the terrorist side pushes there, they can plant the bomb and control the area with ease. A well-placed smoke grenade will impede any vision and allow you to proceed further, but always check here when crossing the roads of Dust 2.