You are here:
Home / 10 Best Uses Of Neon In Games

10 Best Uses Of Neon In Games

A staple in cyberpunk and other futuristic genres, it's easier to name things that don't use the neon aesthetic rather than ones that do. It's one thing to paint a world in bright, inviting colors. It's another to use them effectively.

You can be in the middle of a street crowded in color, with people, and still feel alone. Neon can be nostalgic and familiar just as easily as it can be futuristic and detached. It can be the fun, retro vibe that brings to mind simpler times, or the deceitfully cheery veil between you and the grimy reality barely hidden beneath. Sometimes, it can even be both at once. 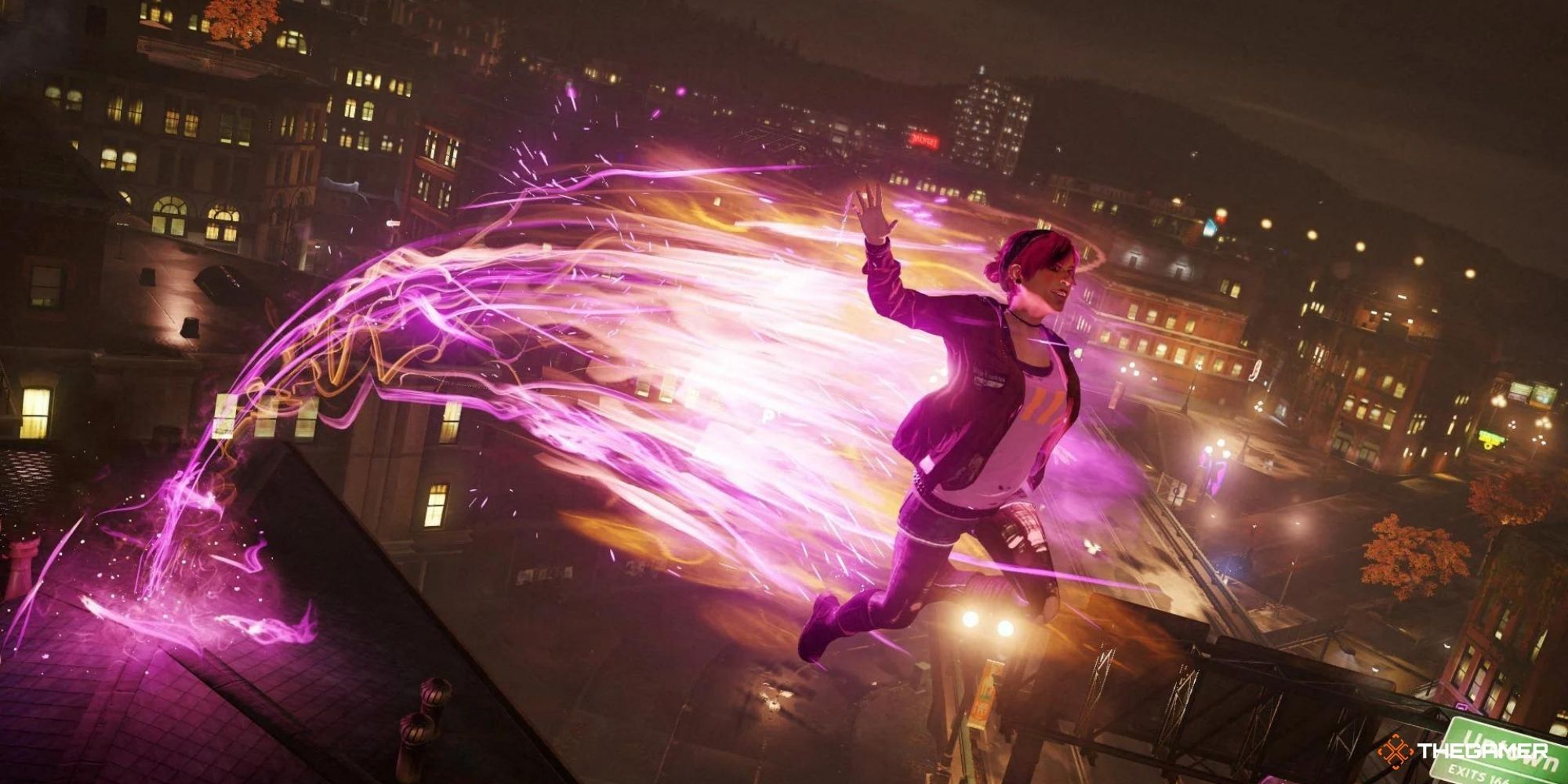 Your powers in Infamous: Second Son are unconventional, to say the least. You'll begin with a more basic, fire-adjacent ability, but your true superpower lets you absorb the powers of others. Soon enough, you will be introduced to Fetch, a woman with neon-based powers, and find yourself with a whole new skill set.

The use of neon in Infamous speaks more to the strange, evolving powers of the conduits rather than overarching themes of excess or violence. More than anything, it feels like a way to make traveling the city's streets appealing visually. There's something carefree about it, a pop of sharp color for the dreary Seattle cityscape. 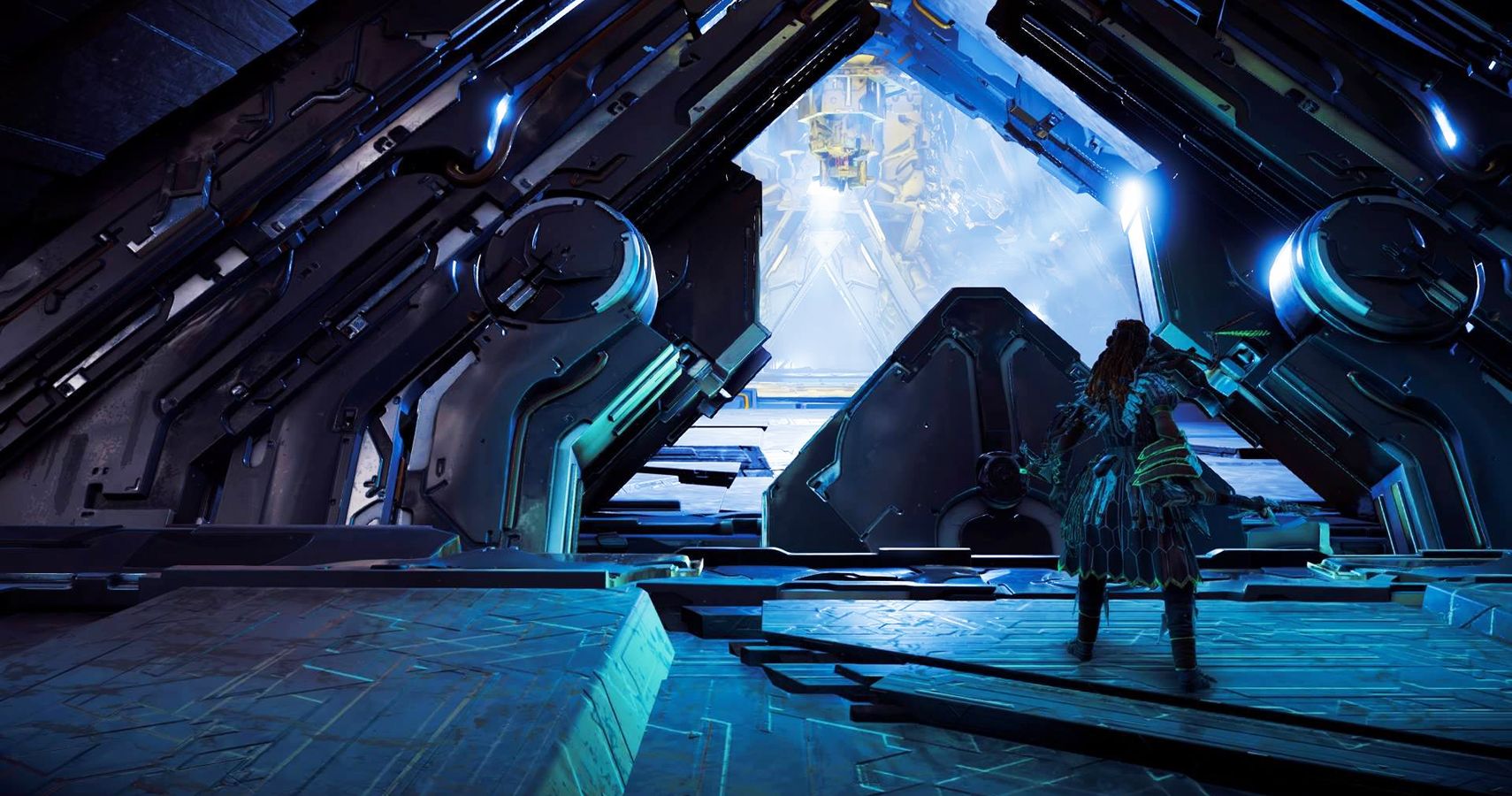 Horizon: Zero Dawn's world is vibrantly alive, with or without the robots you must contend with. Your world is lit by the sun, moon, and the fires that dot the expanse of land. Yet, beneath the surface, neon-lit vaults are waiting for Aloy to explore.

These sections, or Cauldrons as they are called in-game, contrast with the natural lighting with which you and Aloy are familiar. They can be a cool blue or vibrant magenta – emphasizing their existence as relics of the past. They are the briefest glimpses into the Earth as it once was, memorable for how much they stand out in an otherwise organic world. 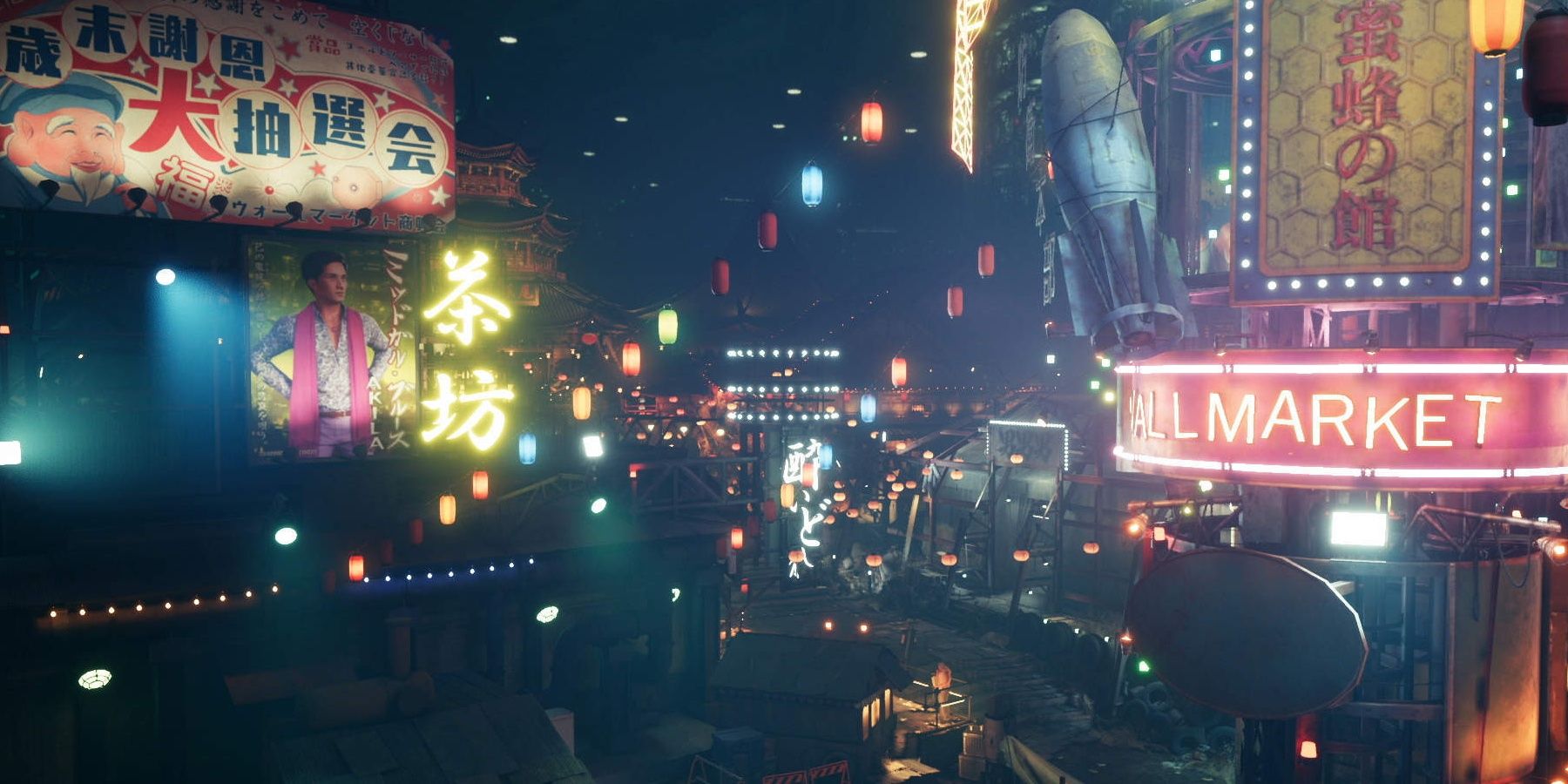 Midgar, the largest city in Final Fantasy 7's world, is built atop massive metal plates, in a structure that is (somewhat oddly) shaped like a pizza. The wealthy live there on the top, while the rest are forced into the slums below, robbed of the sky. The people below make do, with homey lighting and a clear conscious effort to not use too much electricity.

Until you reach Wall Market, in Sector 6. The entire area is a tribute to excess, with countless lights burning so bright it almost seems like daytime. Compared to the other slums, Wall Market clearly cares very little about how much power it wastes. 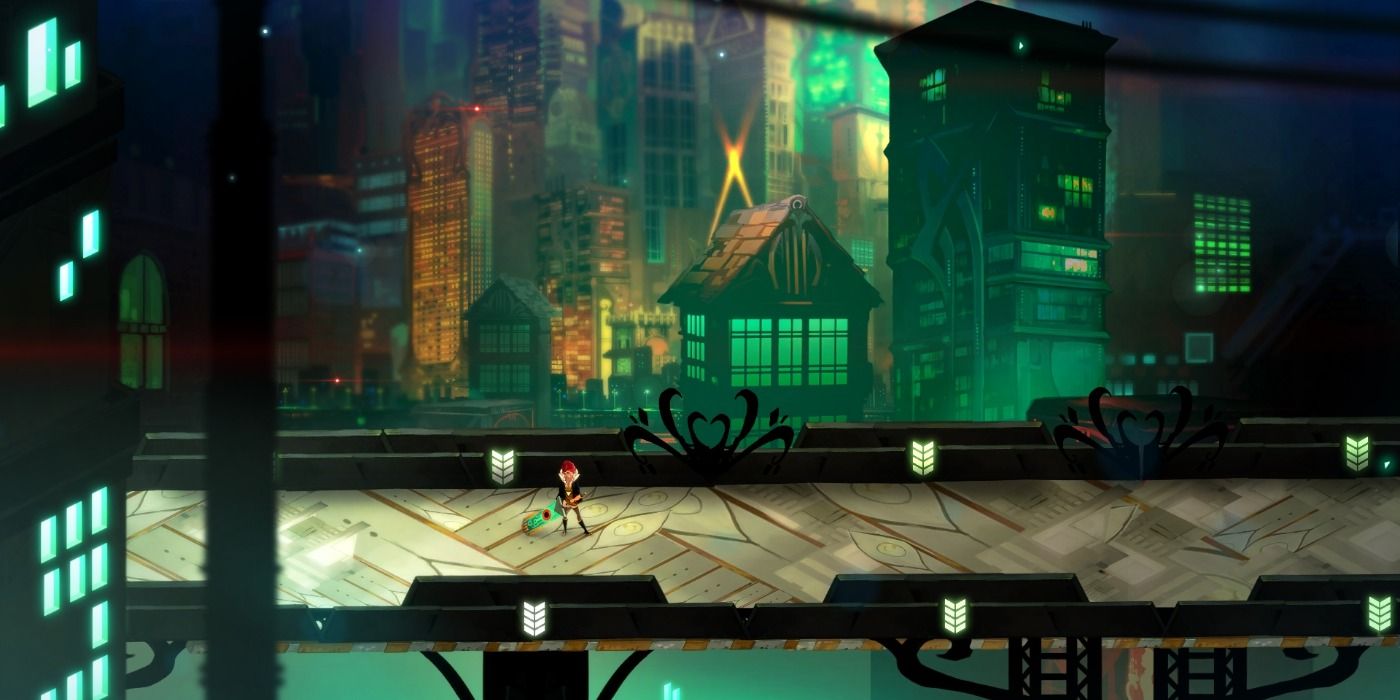 More digital than physical, Cloudbank in Transistor is nothing but artificial light. You will move through the city as it is eaten up by a virus that infinitely spews new technologies to fight you. Eventually, the city may be completely colorless, a white void of nothing.

Transistor uses Cloudbank's neon greens, blues and purples to contrast with the ideal world that Red, the main character, is ultimately seeking. That is a world of sprawling golden fields and blue skies – wind, trees, and weather that is not decided by vote, that is not digitally controlled. She wants to be in that "real" place, with her sword-boyfriend in tow. 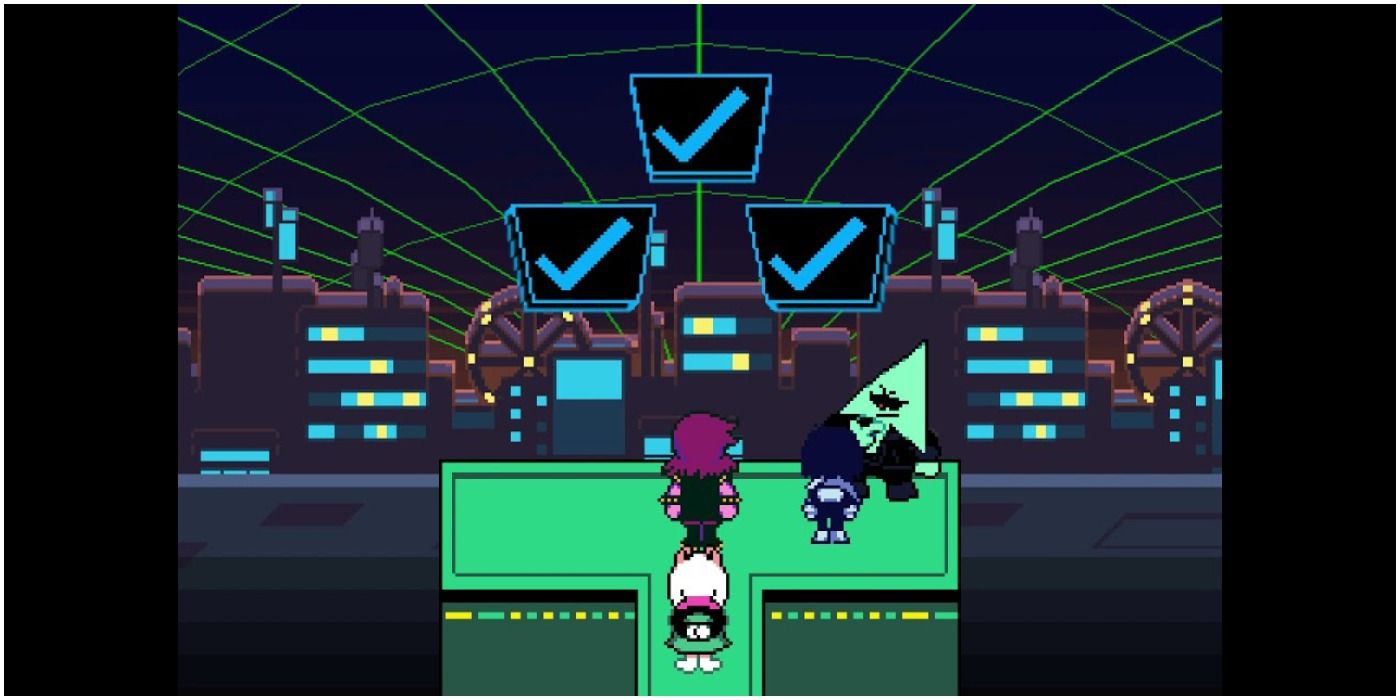 Welcome to the wonderfully weird world of Cyber City. Deltarune's second chapter predictably places you smack-dab in a metropolis of technology. Almost every point of color in this digital labyrinth is eye-catching, a feast for the eyes, especially if you were around in the 90s.

Unfortunately, there is none of the warmth of the real world from which you came, nor the more natural "landscapes" of Undertale before it. While it's busier, teeming with life and light, there is an emptiness, too. Cyber City bursts with chaotic color, yet feels cold, mirroring Kris' growing detachment. It looks like a playground, and feels like one, too, but something gnaws at you about how things feel a little off. 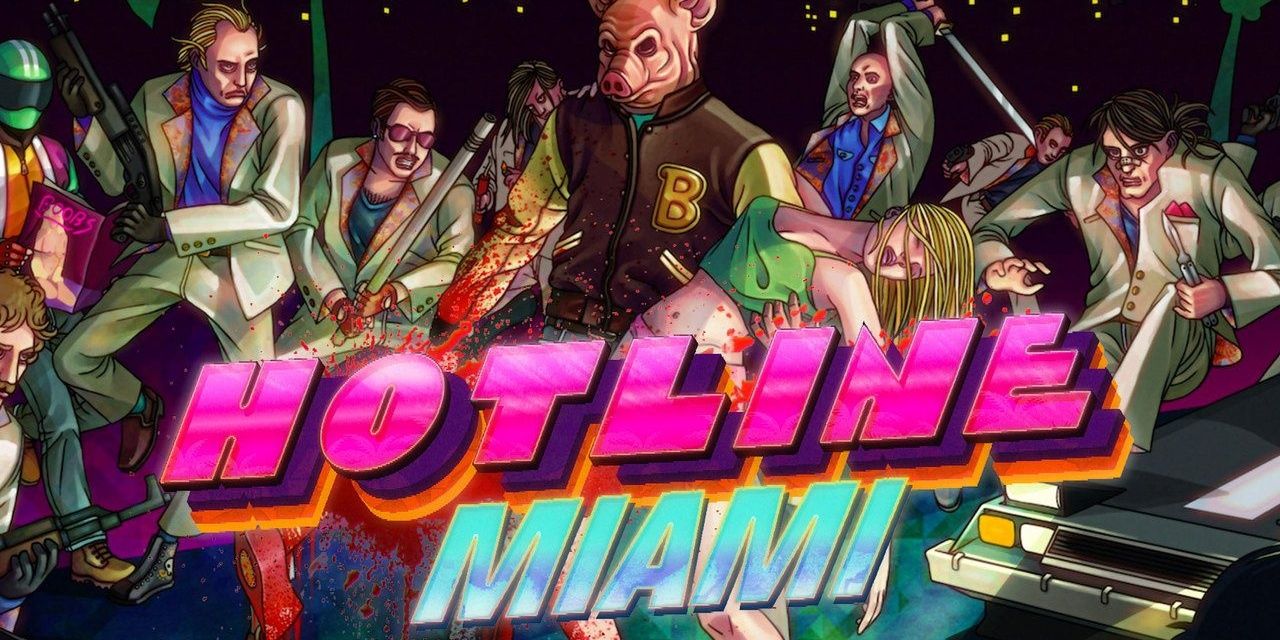 Hotline Miami bleeds neon. Okay, that's not true – it's a very violent game, after all, so it mostly bleeds red. Regardless, Hotline Miami embraces what neon brings to many a mind: the places where the city is awake as the rest of it slumbers peacefully. An unsavory underbelly to a lifestyle that already feels a little hedonistic.

In Hotline Miami, neon is a tool that plays well with the excessive violence; neon so often does feel like a sign of excess, after all. It fits with the time period of the game, of course, nailing that retro-pixel art style with ease. 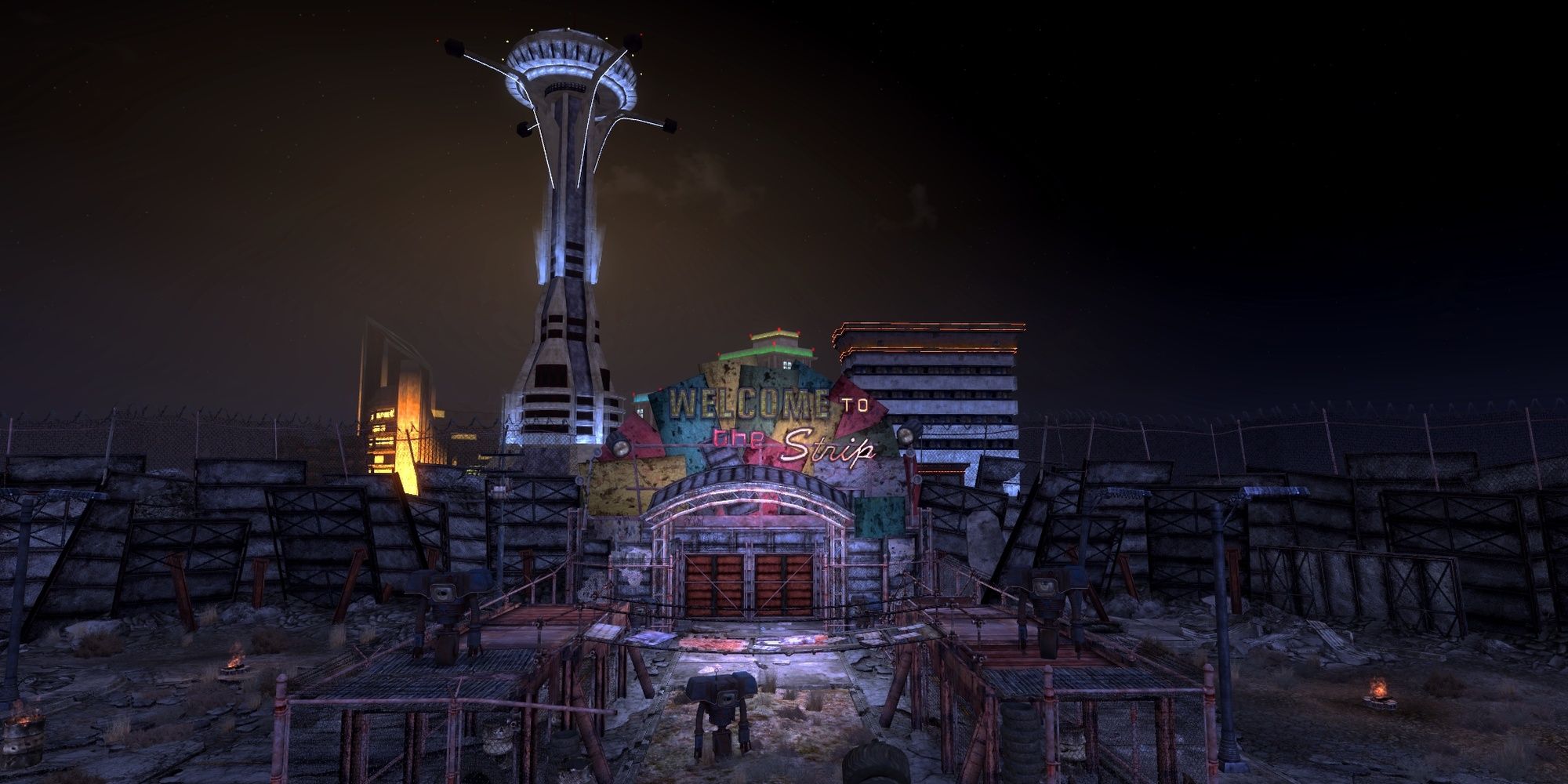 Cities aren't entirely uncommon in the Fallout series, but we can all agree that no one does it quite like New Vegas. The desert can feel overwhelming to navigate, especially as a first-time player. But then, in the distance, you may spot a waypoint: a glowing post-apocalyptic metropolis, beckoning you to safe harbor. Or, as safe as a harbor can get in Fallout, anyway.

You will be pelted with color, noise, and the distinct impression of glory days long past. Despite this, it can also feel like the promise of an easier existence. Glimmering excess always works to bring people in, not even a nuclear apocalypse can stop that. Welcome to The Strip, indeed. 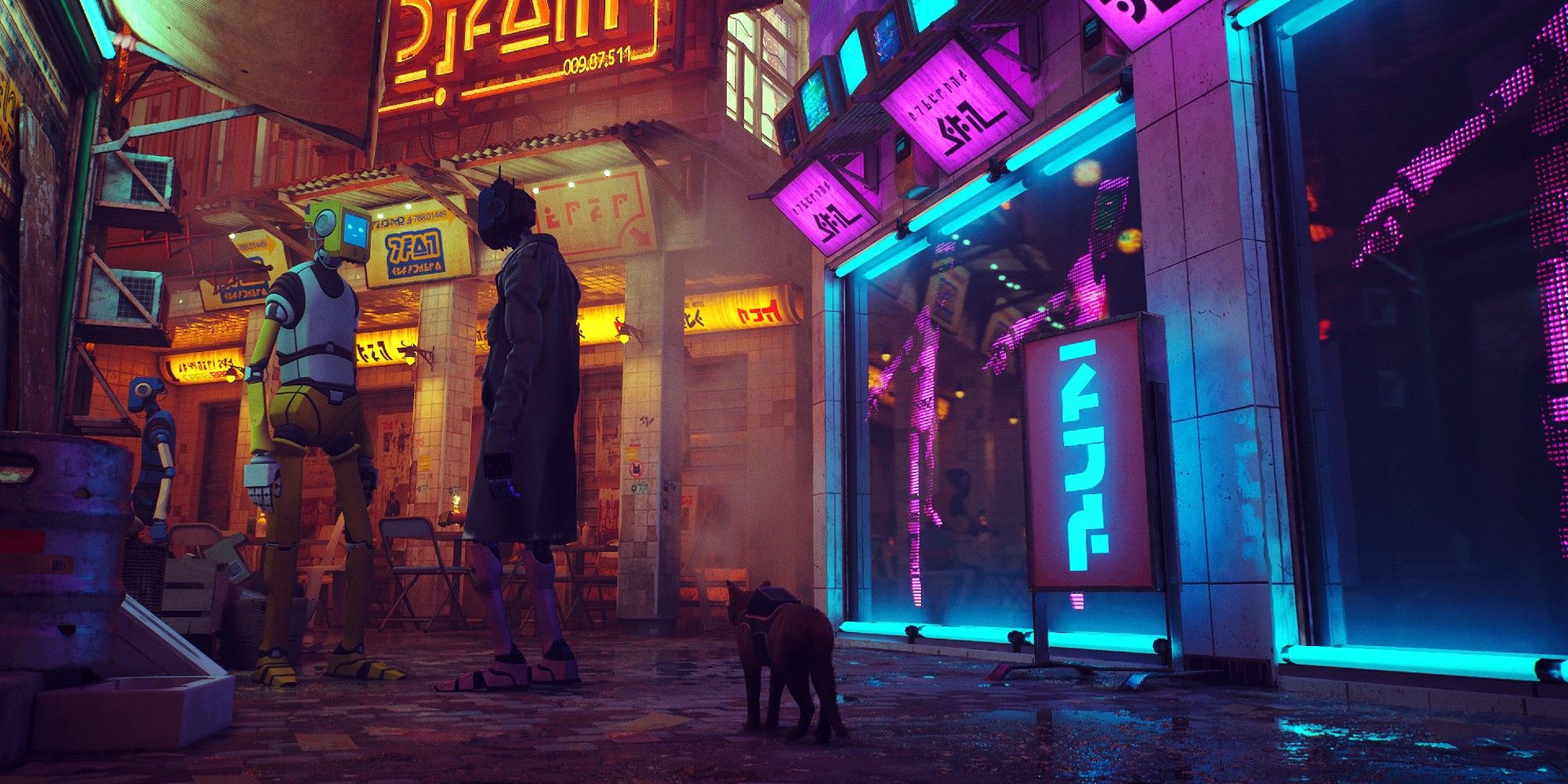 Stray may be about a cat, but the moment you fall from the overgrown greenery of your home into the dark city below, any kind of light feels hard to come by. Flickering signs in neon guide you through the crowded yet dead city, urging you forward. To a cat, such light may not be comforting, especially when they are used to basking in the sun, but for you? Any sign of life is one worth following.

And what life you'll find. The robots in Stray have created some lovely, cozy homes. Yet, there's still that cyberpunk staple of neon lights in the streets of the settlements. Instead of feeling like a way to mask the rot of the city with color, it is a sign of beautiful, vibrant life. Follow the light in these dark city streets, and you will eventually find a home. 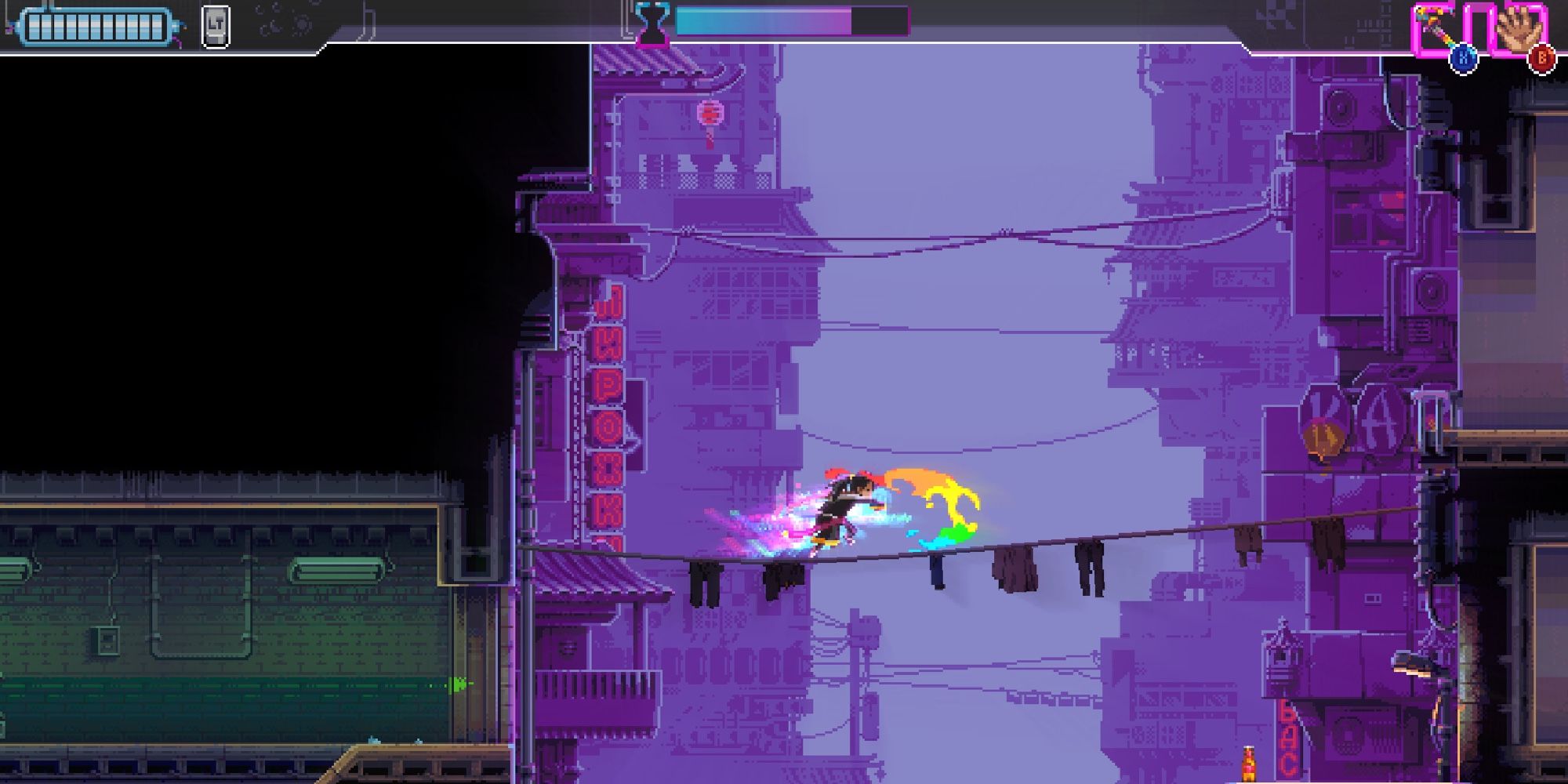 Like Hotline Miami, its main inspiration, Katana Zero employs a pixel art style that embraces its retro color palette. However, while you will find neon signs, or spotlights, all across the world, Katana Zero's use of neon is not limited to just decoration.

The UI, and Zero's attacks, are rendered in bright neons, even in the mundane, dingy spaces. No matter where he goes, he contrasts with the regular enemies he's tasked with eliminating. These vibrant pops of color highlight how strange Zero's abilities are, how his competence at his bloody profession is downright unnatural. It's a way to communicate that Zero is different and then let you figure him out throughout the rest of the game. 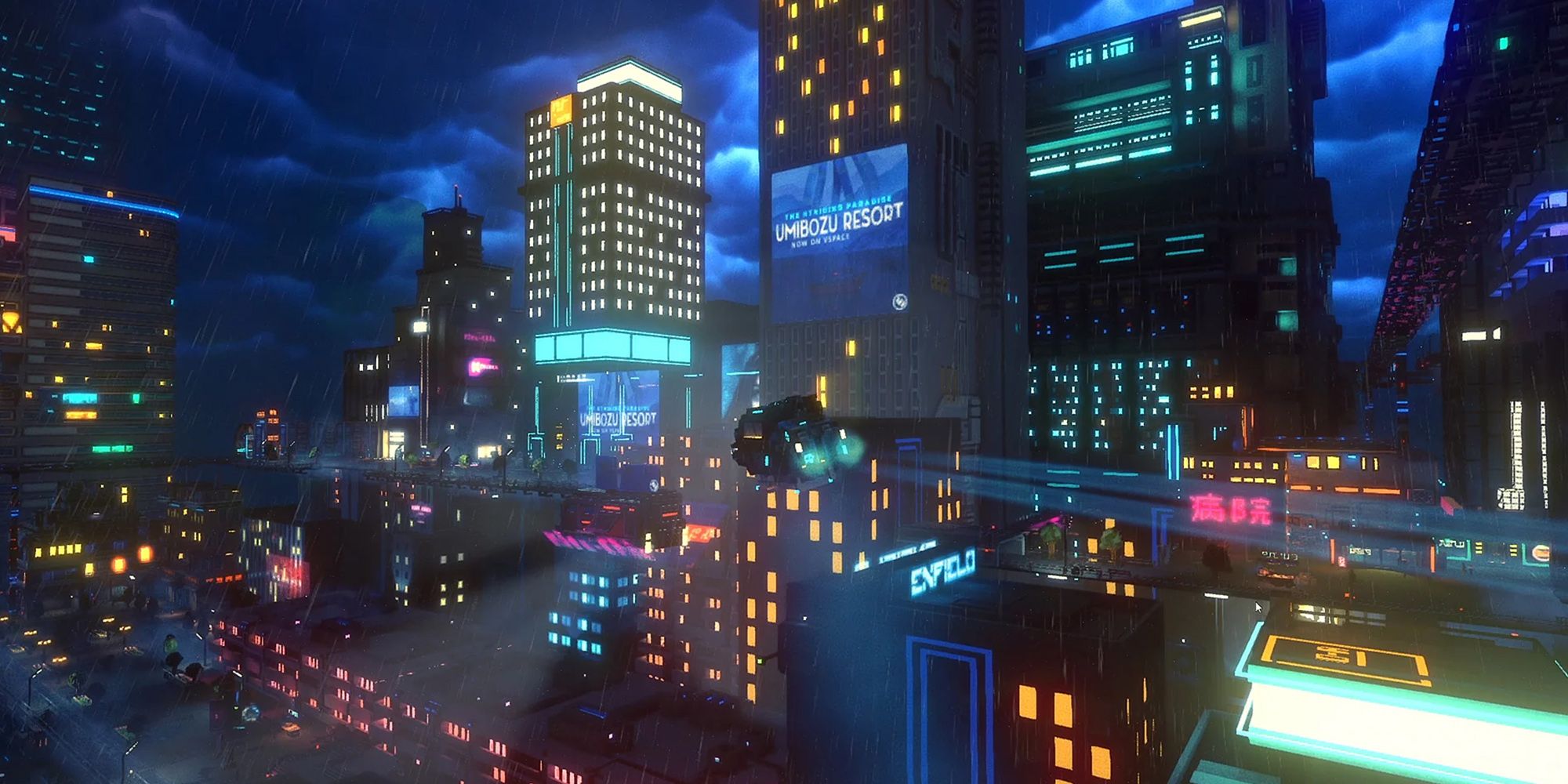 Cloudpunk has got it all: a city practically built from neon, rain, shady dealings, and pronounced class divides. Set in Nivalis, a city that extents from the ocean to the clouds, the oft-underappreciated Cloudpunk puts you in control of a new delivery driver, Rania. Driving through Nivalis feels like driving through a sea of radiant neon, muted only by the rain that's pouring down on your head.

It's hard to imagine natural light in Nivalis, harder still to imagine organic life existing outside the confines of the city. As lively as the colors are, the reality of a hyper-capitalistic city is catching up to the infrastructure. All the brightness Nivalis offers can't mask the decay beneath.