With 12 games under its holstered belt, the Tomb Raider series has made its mark on the gaming industry in various ways. Between starring one of the most iconic female protagonists in gaming and using more cutscenes for story building, there’s a reason Tomb Raider has been around for as long as it has.

But a large part of the adventure series charm comes from its classic boss battles. Whether Lara Croft is fighting the undead, the extinct, gods, or characters straight from ancient mythology, the Tomb Raider developers have always delivered. Here are some of the best Tomb Raider bosses from 1996 to 2018. 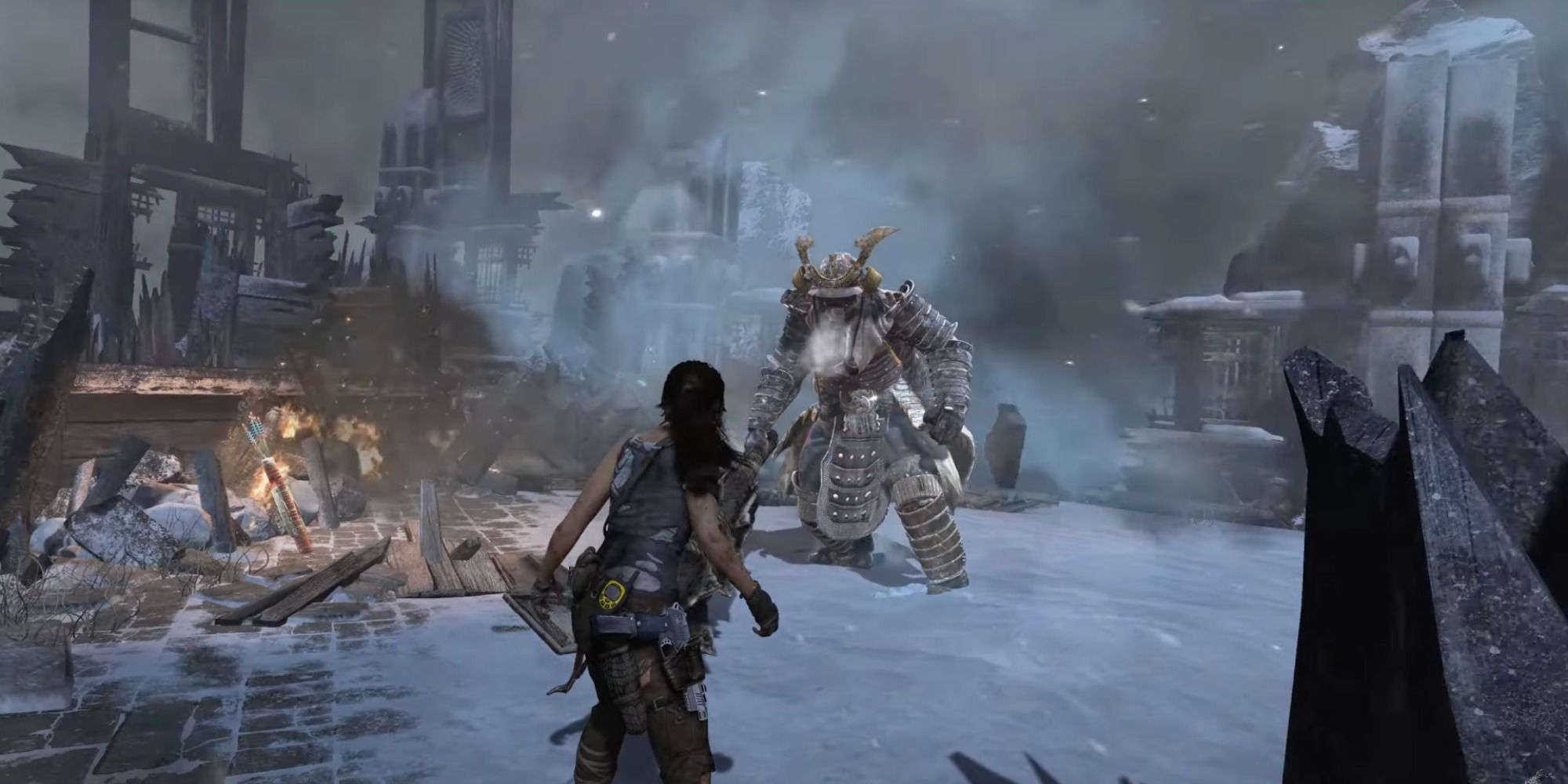 The classics may be more widely regarded for iconic boss battles, but the most recent reboot trilogy offers plenty to keep you on your toes — or rather, thumbs. The 2013 restart of Tomb Raider brings you to the treacherous island of Yamatai. This land is inhabited by a cult, a goddess, and of course, the undead.

After stealthily dodging the undead Oni soldiers for some time, Lara finally has to face a giant Oni Stalker accompanied by smaller enemies. Luckily, an earlier boss battle gives you the move sets to prepare you for the larger boss.

9 Jaguars — Shadow Of The Tomb Raider 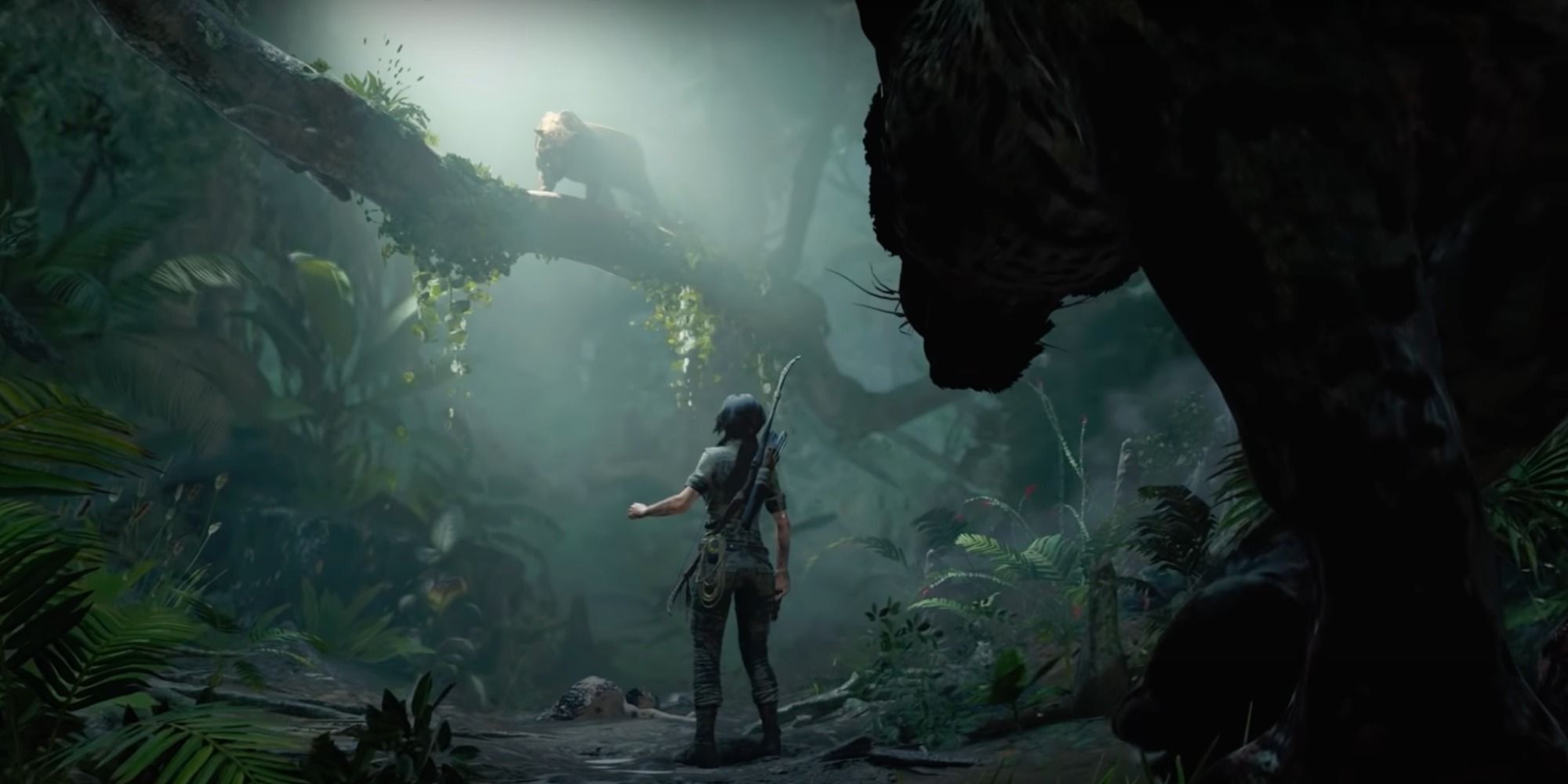 Imagine walking through a jungle, things just seem a little too quiet, and you stumble upon a blood-stained rock. Suddenly, you’re confronted by not one, but two apex predators. In Shadow of the Tomb Raider, Lara is being stalked by jaguars while in the jungle.

After the jaguars first confront you, you’re once again left alone and anticipating their next strike. The boss battle includes plenty of dodging and aiming, as you’re limited to just your bow here. The suspense that builds as the jaguars approach is incomparable to other boss battles. 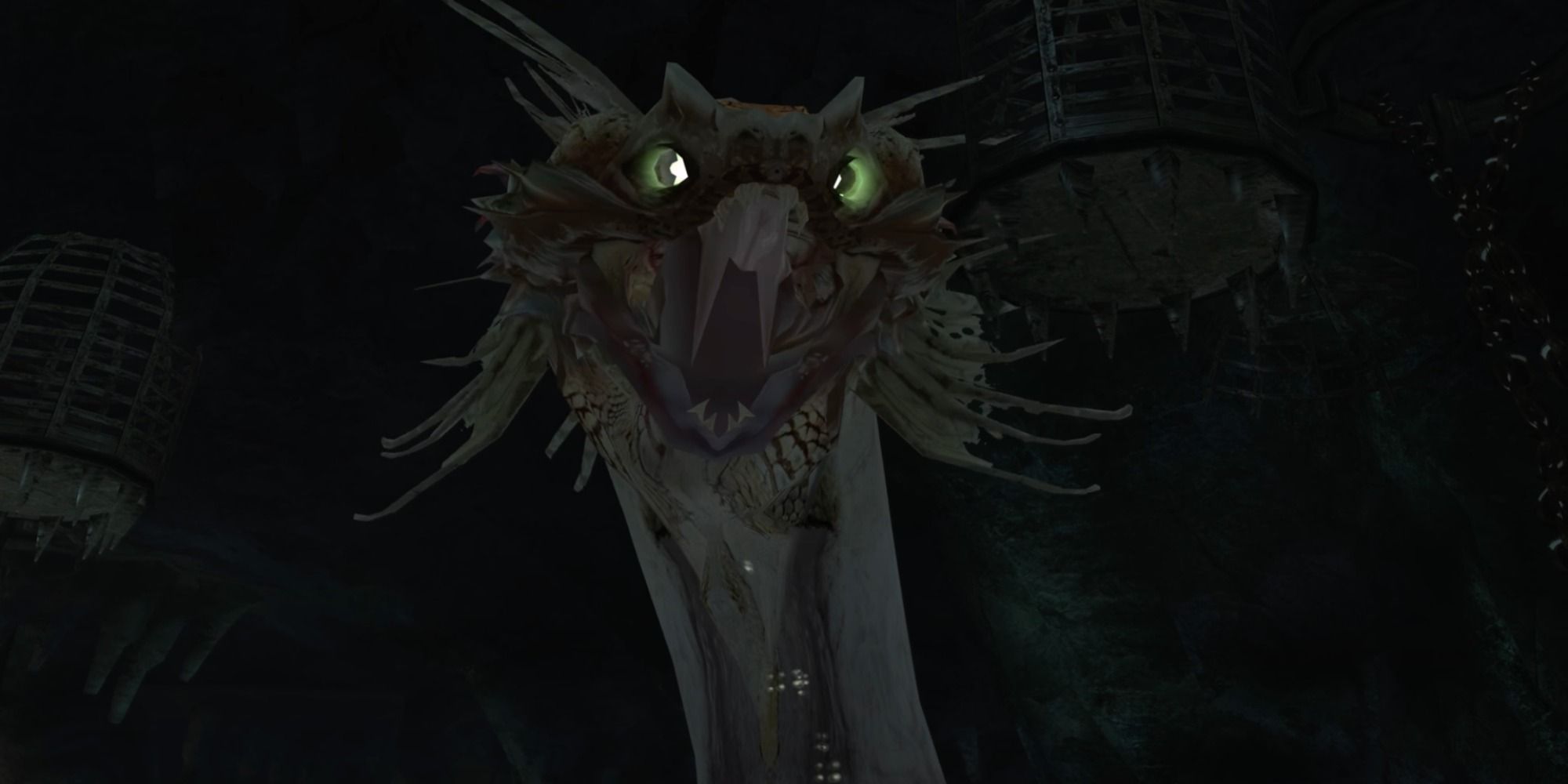 You’re exploring King Arthur’s tomb in Tomb Raider Legend, which just so happens to be under a museum in England. What could go wrong? Of course, finding the tomb and taking a relic can’t be that easy.

Towering over you with glowing green eyes, a giant sea serpent awaits you in the moat. What sets this boss apart from the rest is its jump scare quality and the careful technique you need to use to take the serpent down whilst avoiding its poison and lunging. 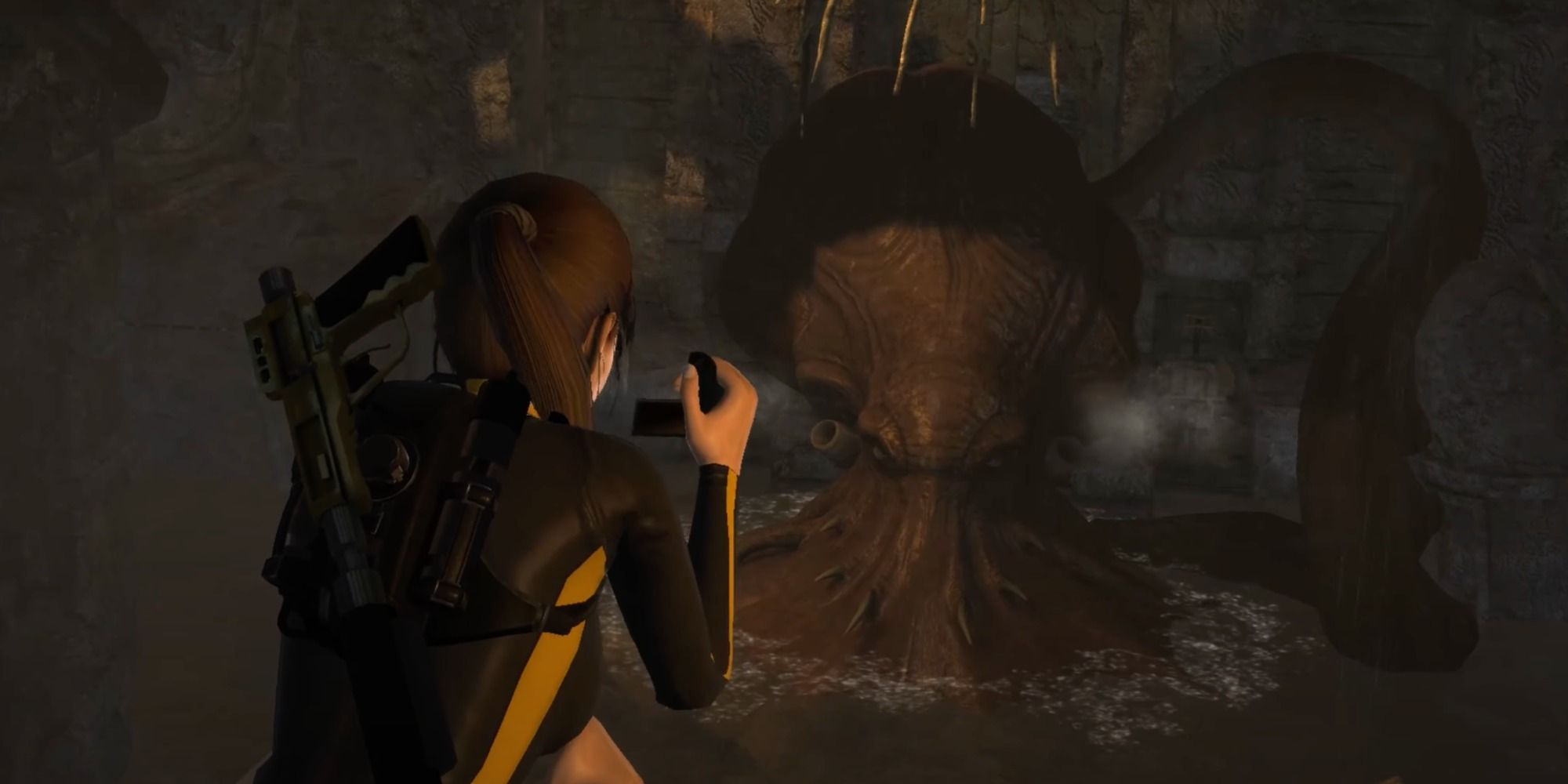 Although much different from the rest, Tomb Raider Underworld’s Kraken is certainly worthy of a mention. As you enter an underwater tomb in the Mediterranean Sea, you’re met with a giant squid. But instead of taking the Kraken head-on, you have to be a little more strategic.

While you avoid the Kraken’s grasp, you’re prompted to do some puzzles that will slowly get the tomb up and running again. Aside from being a really cool enemy to face, climbing or swimming around this giant squid is absolutely nerve-wracking. 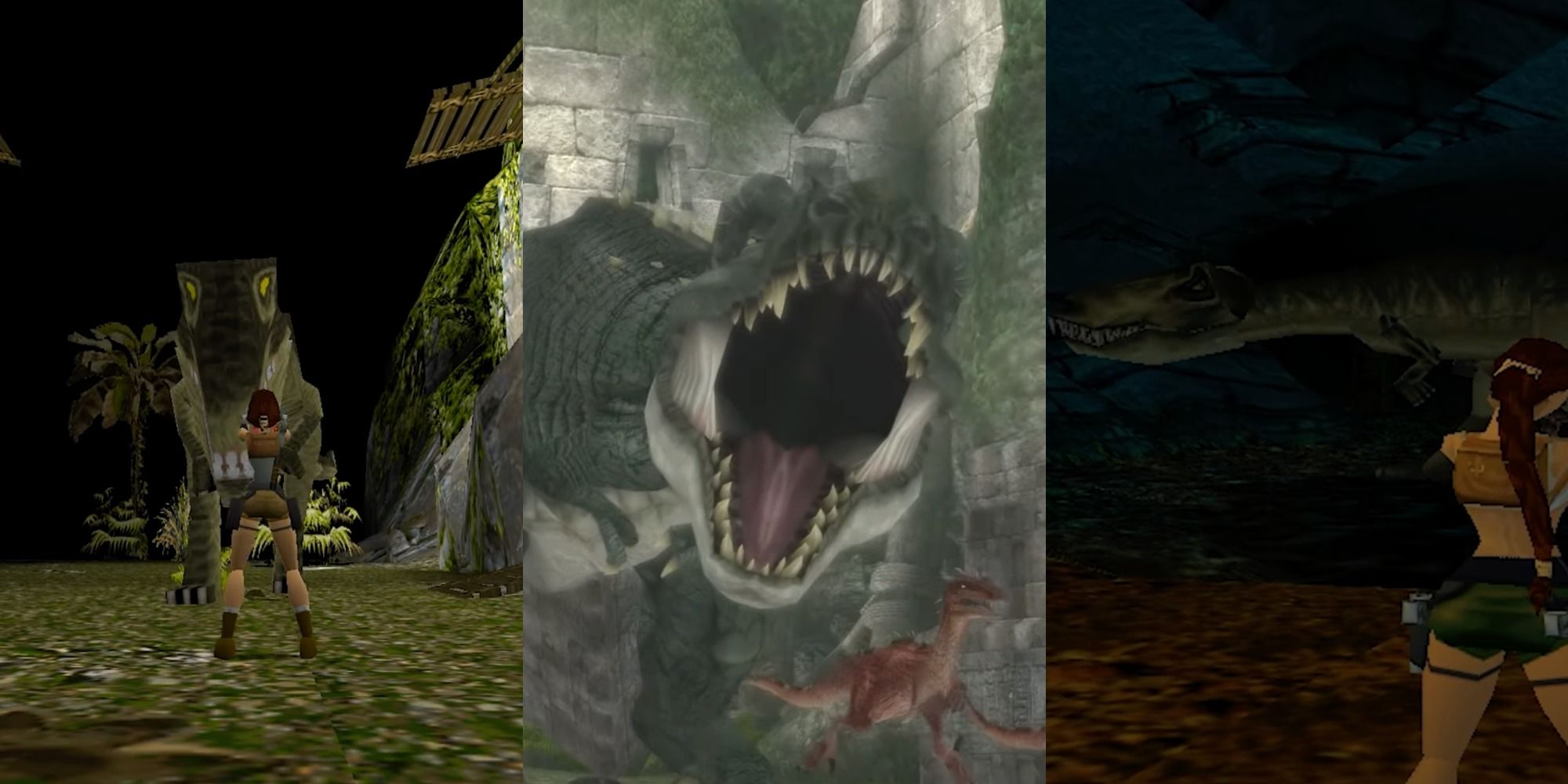 Alongside mythological creatures, sometimes Lara has to fight the extinct. Lara Croft has to take down a Tyrannosaurus Rex not once, but three separate times.

The first dinosaur you encounter is also the first boss battle of the original Tomb Raider, which is of course also included in the Tomb Raider Anniversary remake. The second one is faced underground in Tomb Raider II. And the third can be found in Tomb Raider III alongside other dinosaur enemies. Although you’re facing the same type of enemy, it’s fun to see the different ways you can fight a T-Rex. 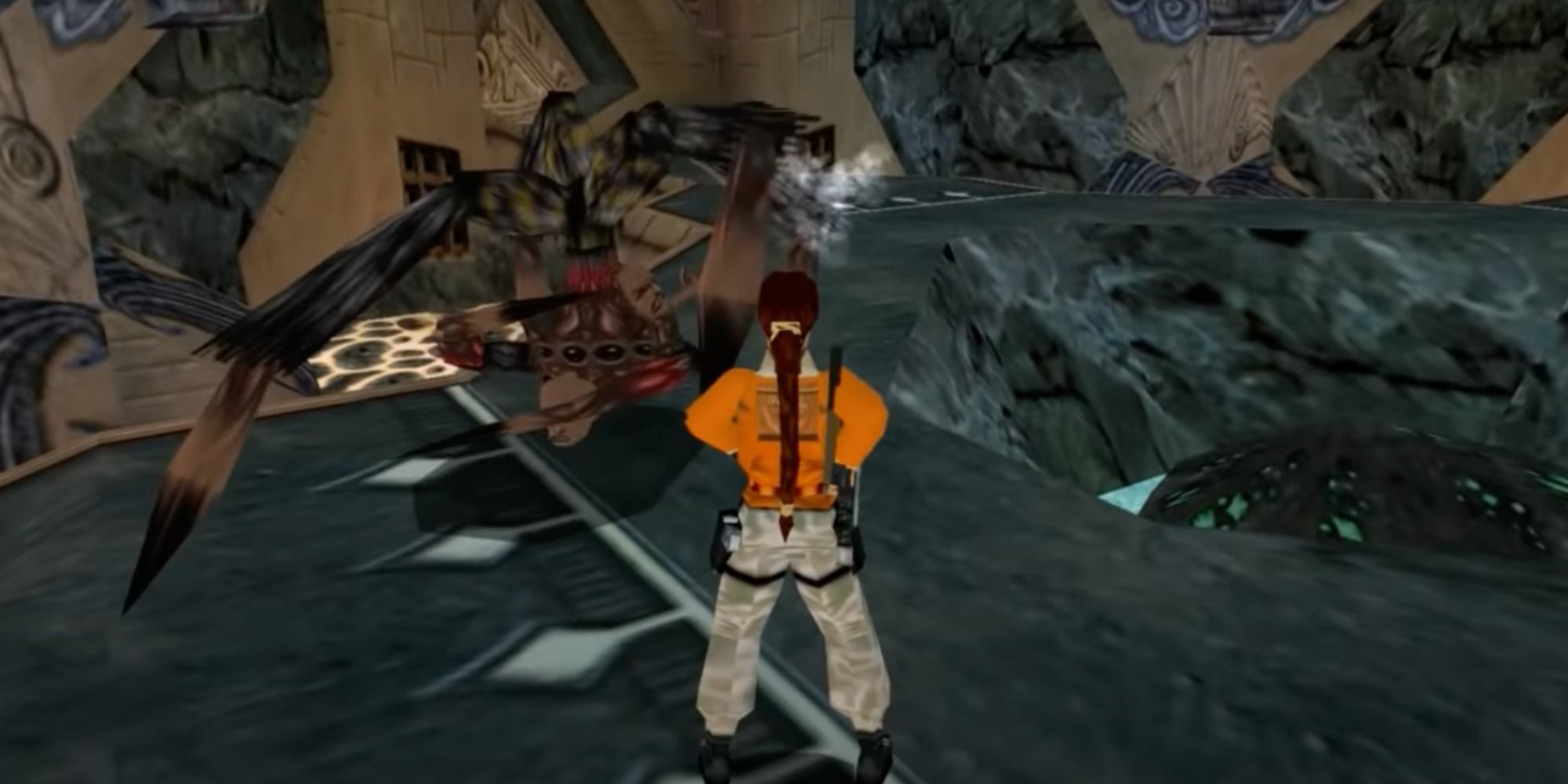 After traveling around the globe as far as India to Area 51, Lara brings you to the final level of the game in Antarctica. And if the extreme weather and climate weren’t enough, you’ll now have to face off against one of the game's main characters.

The final boss reveals itself as a terrifying mutated spider-like creature. Not only are you tasked with defeating it, but you also have to collect artifacts while dodging its attacks. 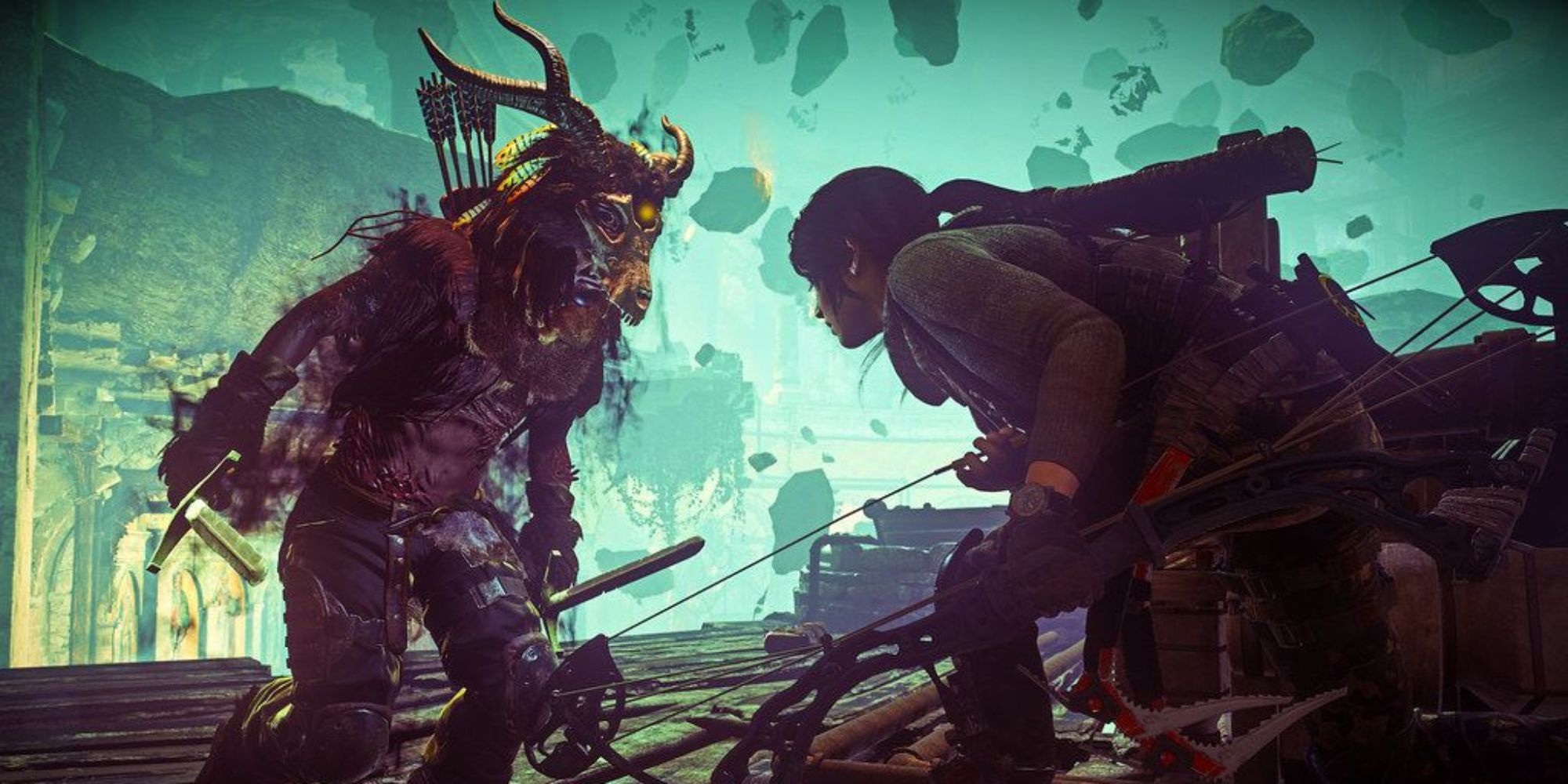 Though it’s an add-on and not part of the main story, the Baba Yaga boss in Rise of the Tomb Raider easily contrasts the gameplay that you’re typically used to in the games. While traversing the open-world environment of Siberia, the DLC transports you into Russian folklore.

You’re tasked with investigating the mystery of the Russian witch, Baba Yaga, who travels in a house with legs. There, you have to fight both the witch and other enemies while under a hallucinatory state, changing the way Lara perceives the world around her. 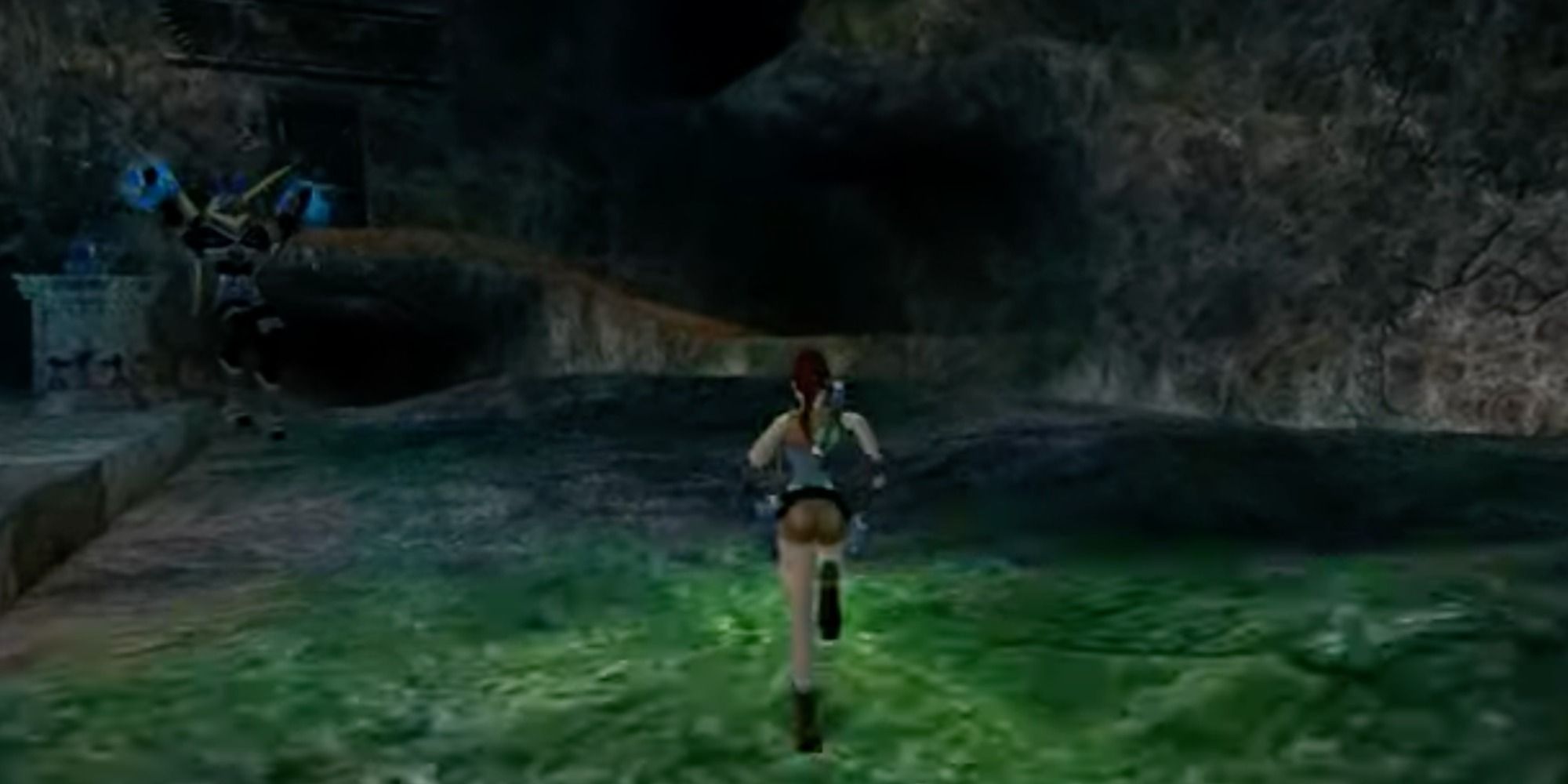 Known to be a favorite for most fans, Tomb Raider: The Last Revelation takes you to Egypt and focuses on Lara’s character development and past. The game and boss battle pay homage directly to Egyptian mythology with runaway boss battles like the Bull and the battle with the god of trickery himself, Seth.

As a god, Seth can’t be killed, which only makes the battle more intimidating and challenging. With mystical abilities and being practically invincible, strategy, caution, and creativity are of the utmost importance. 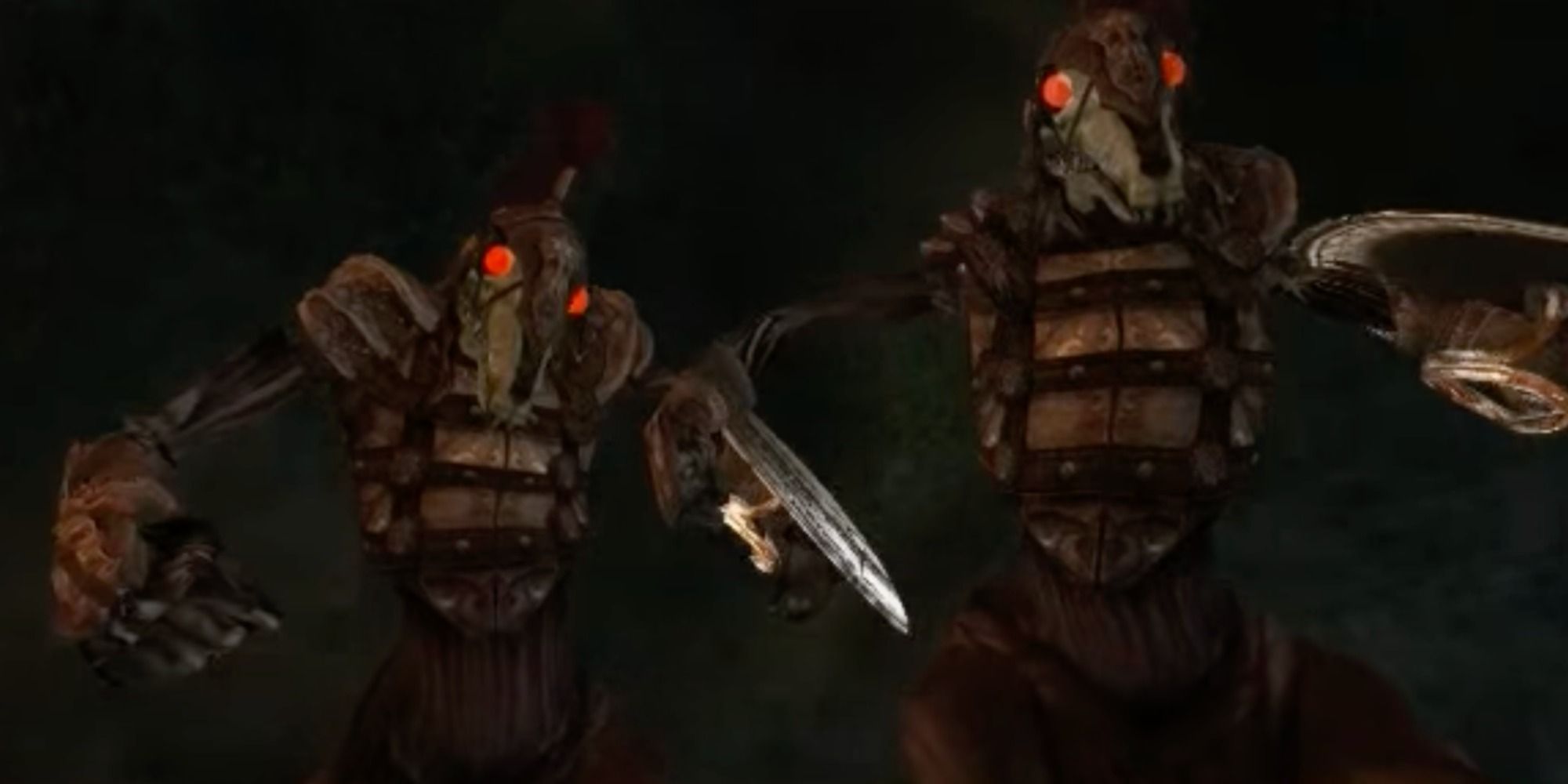 As if the first boss battle of Tomb Raider I and Tomb Raider Anniversary weren’t enough, you’ll find your second boss in Greece, and more specifically, inside the Tomb of Tihocan.

Tomb Raider Anniversary’s Centaur boss is a bit more developed than its predecessor, so that’s where you’ll find the real battle. As Lara Croft, you have to use your dual pistols to fight off two centaurs who both have the ability to trample and turn you to stone. 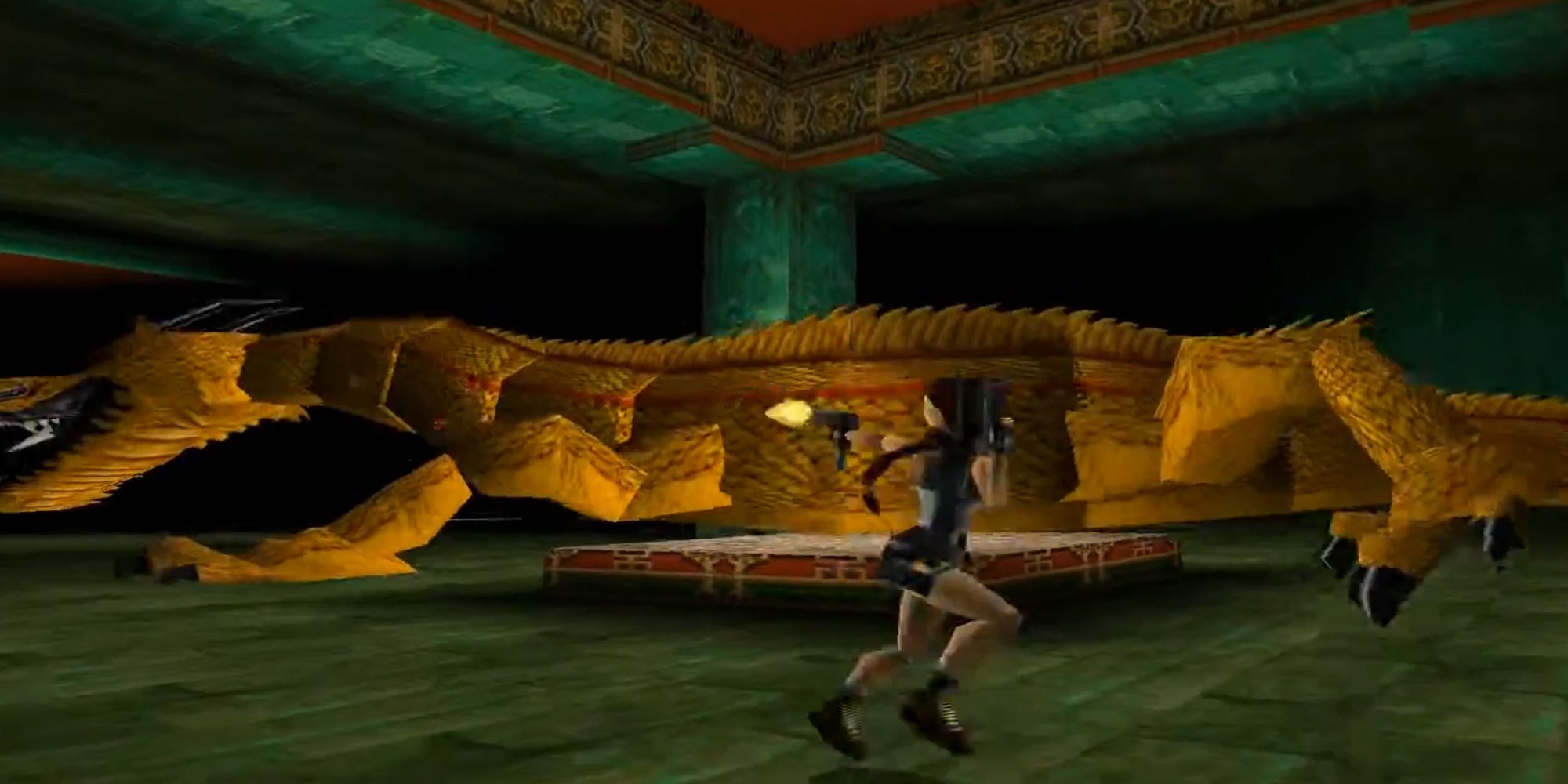 While in the Dragon’s Lair, you have to face a fire-breathing dragon. Although slow-moving, the dragon’s fire breath causes a ton of damage, prompting you to jump around and hide behind anything you can in true Lara Croft fashion.