You are here:
Home / 10 Best Magic Spells In Kingdom Hearts: Birth By Sleep

Magic always plays a strong role in the Kingdom Hearts games, and Birth By Sleep is no exception. As usual, there's the multi-tier system where you start off with simple versions of certain spells, and eventually end up with much more powerful versions (such as Fire eventually becoming Firaga).

However, BBS also allows you to create new spells and abilities by combining less powerful ones together, via a feature called Command Melding. Given how many regular spells there are, this leads to a vast, intricate combat system that ensures that the gameplay never gets repetitive, even when you consider you're playing through three different stories throughout the game's overall narrative. 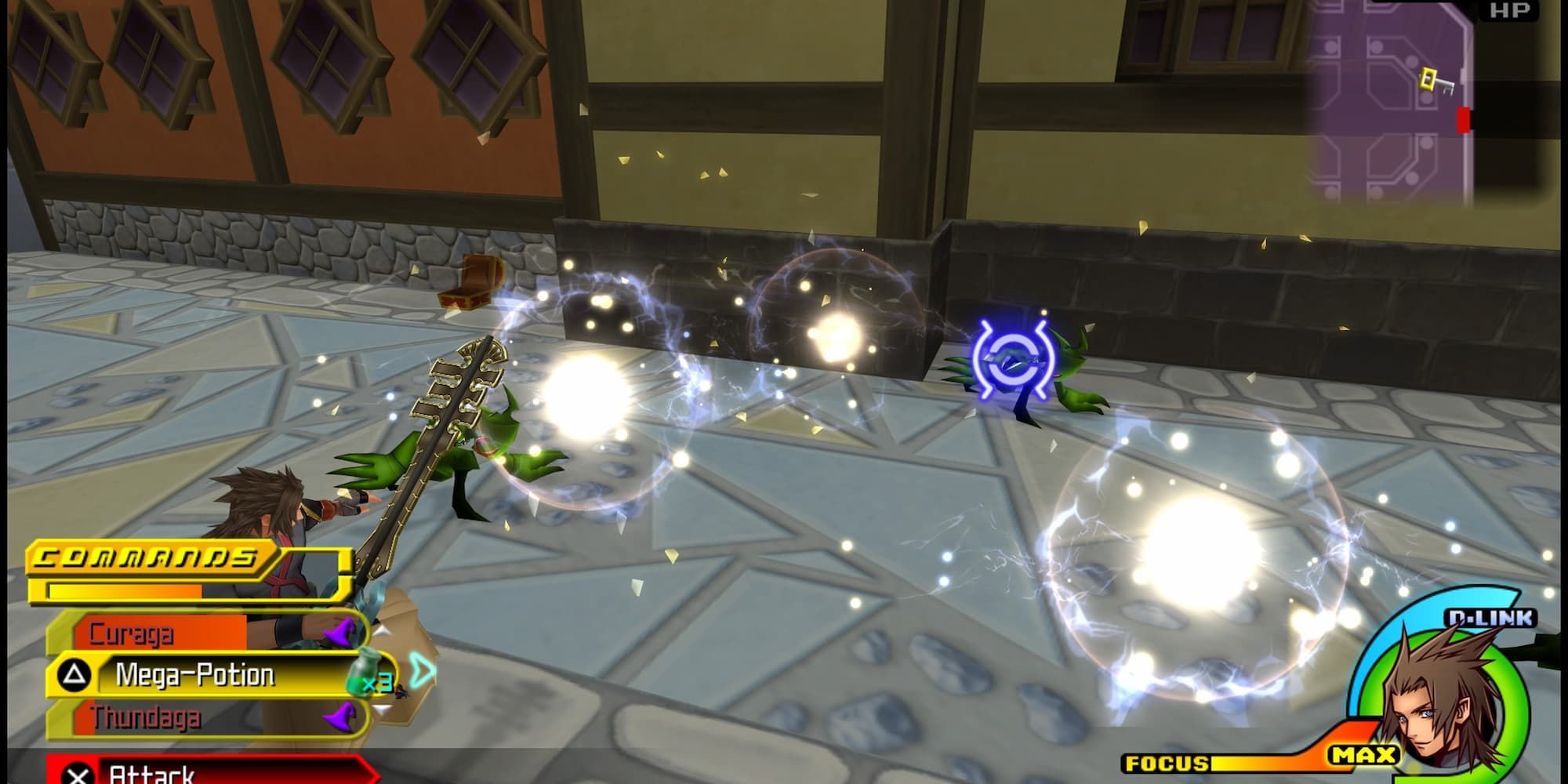 Thunder spells are always effective within the Kingdom Hearts games, and Thundaga routinely serves as the strongest version regardless of the title. Thundaga summons several lightning bolts from the sky which target multiple enemies, and the bolts can also jump to further enemies after the initial contact.

Thundaga is actually strong enough to instantly kill many of the lower-ranking Unversed. Also, Aqua can get a version called Thundaga Shot, which deals the same damage but is shot in front of her instead of summoning lightning from the sky. 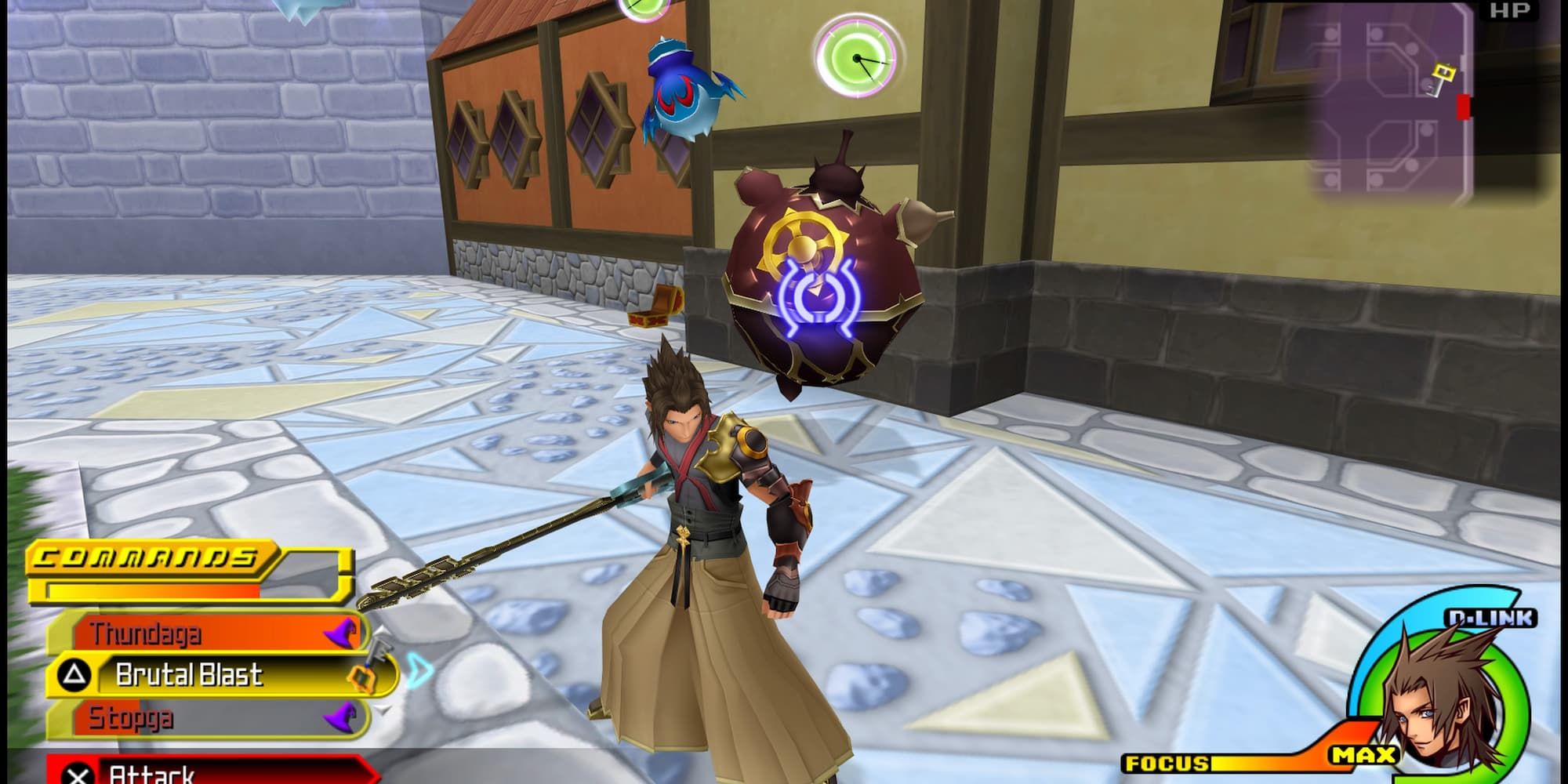 As can be gathered from its name, Stopga causes an enemy to be frozen in place as if locked in time, for a short duration. They can still be attacked and take damage, although they won't actually die until the effect wears off. Even bosses can be affected by this spell, which is a real blessing against the likes of Vanitas Remnant and Unknown Figure, who give you little breathing room.

Best of all, Stopga doesn't take that long to recharge in comparison to other spells of the same power. 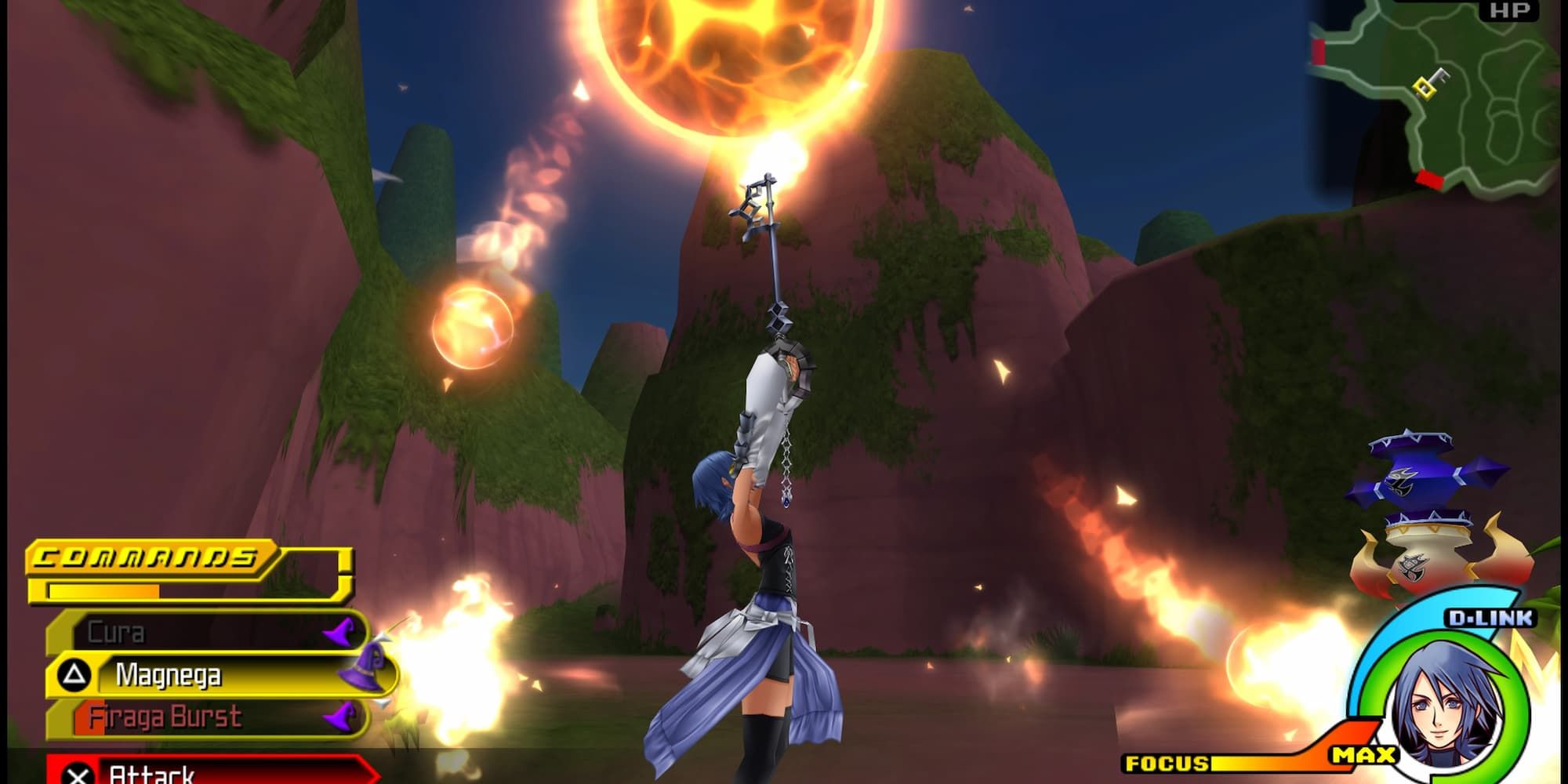 The Fire spell is a staple of the Kingdom Hearts franchise, and Firaga is usually the strongest version of that spell. BBS manages to go a bit further thanks to Firaga Burst, although it can only be used by Aqua.

Firaga Burst creates a large ball of fire above Aqua, which itself shoots out smaller balls of fire to nearby enemies surrounding her. If they hit, the enemies also ignite and take additional fire damage — if they haven't already been killed by the initial burst of damage from the fireballs, of course. 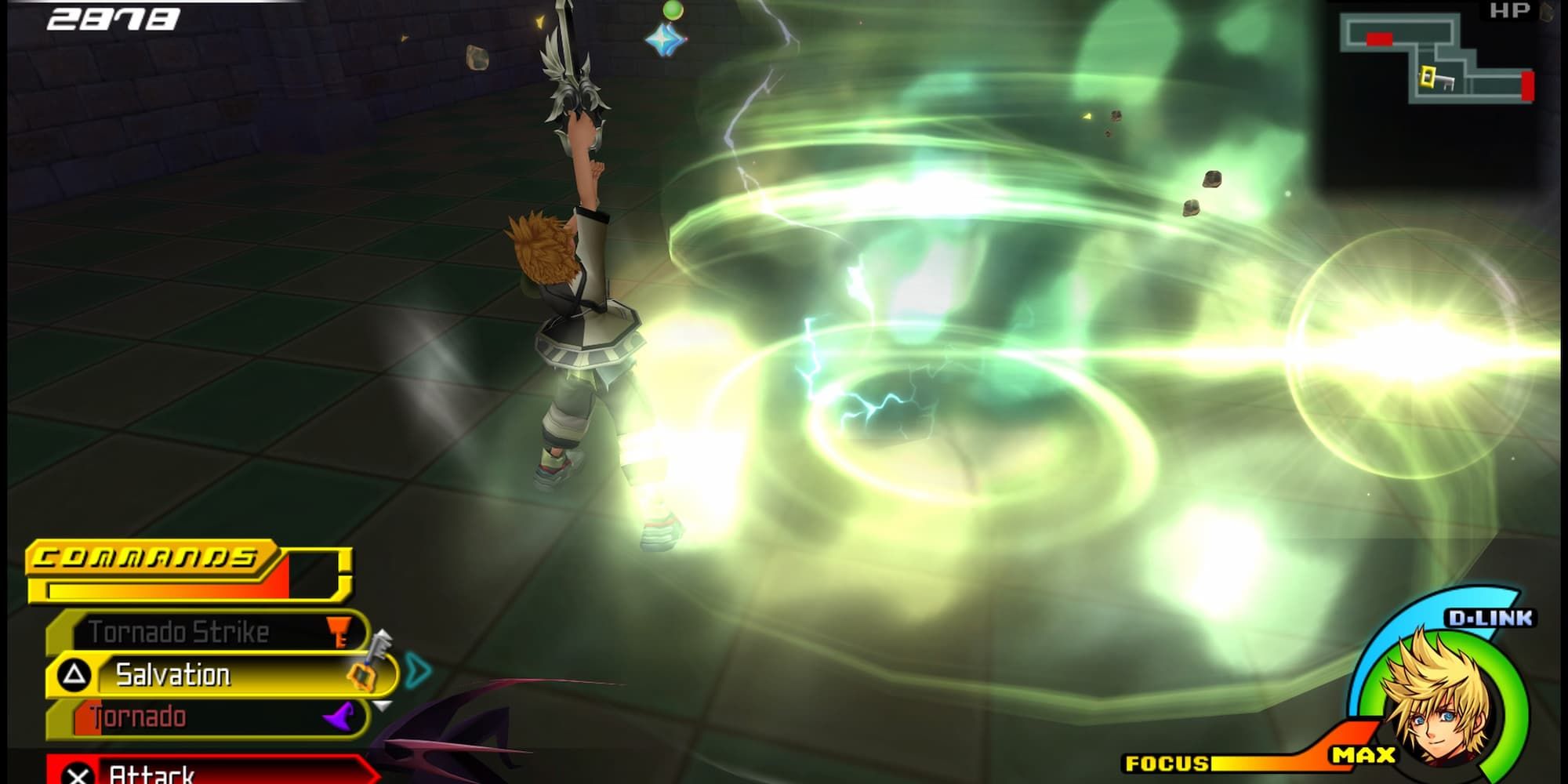 Tornado allows you to summon a powerful whirlwind which is strong enough to kill most Unversed almost instantly. Additionally, you can control it for its duration, which is a fairly lengthy amount of time, so you can keep the damage up regardless of whom you're fighting.

Do note that this spell can only be obtained by Ventus, and even then, it has to be created via Command Melding. It's a shame Aqua and Terra can't also access it, but they get their own powerful spells to make up for it. 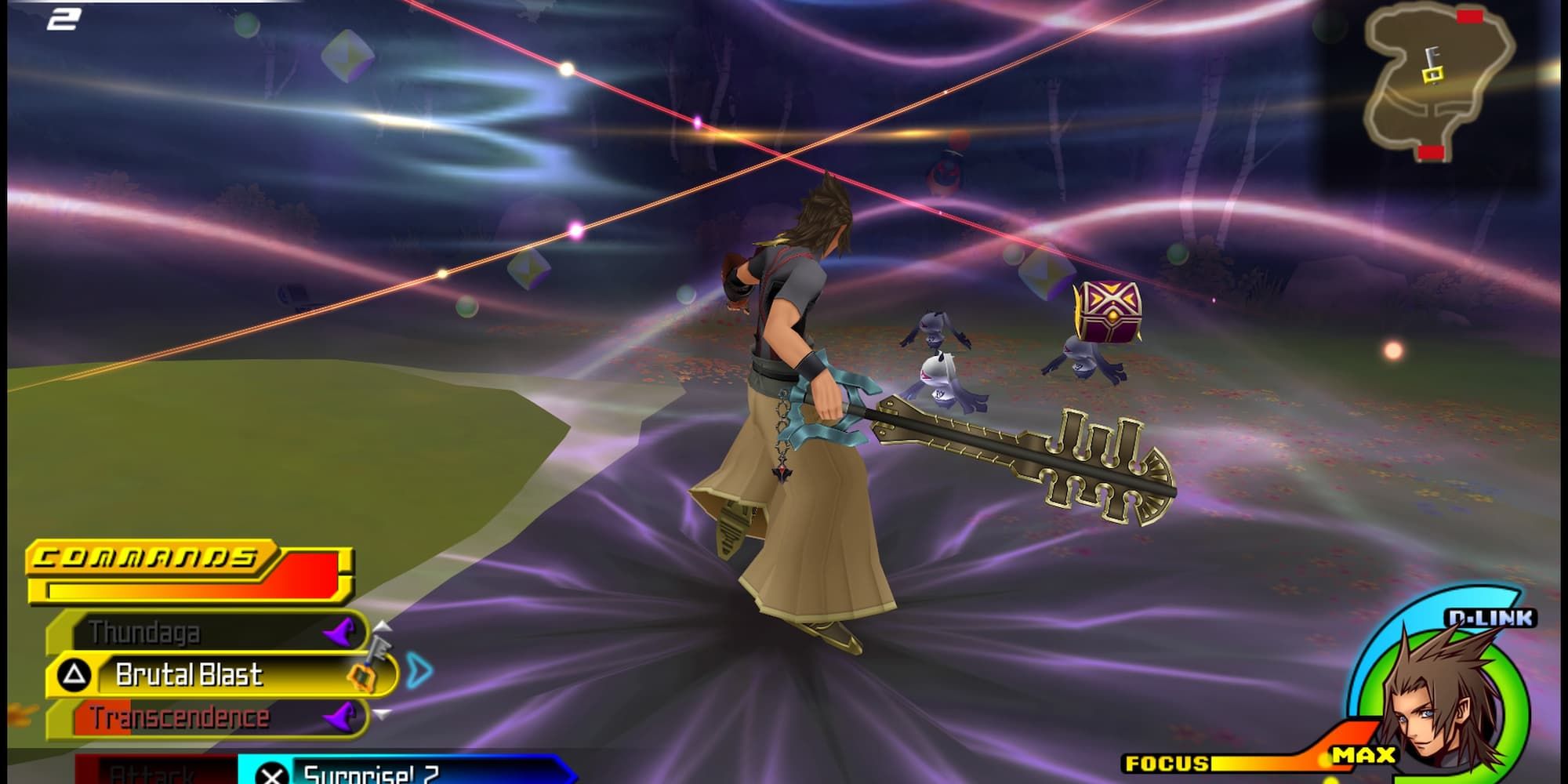 Transcendence acts as a combination of Zero Graviga, Magnega, and Aeroga. It draws in multiple enemies, suspends them in the air momentarily, and then flings them aside to cause a lot of damage. The range is also very wide, so you're unlikely to miss when casting it.

Transcendence can take a while to recharge, but the extra space it frees up in the Command Deck balances this out. Furthermore, all three characters can create this spell via Command Melding, and Aqua can also find it in the Lower Zone level. 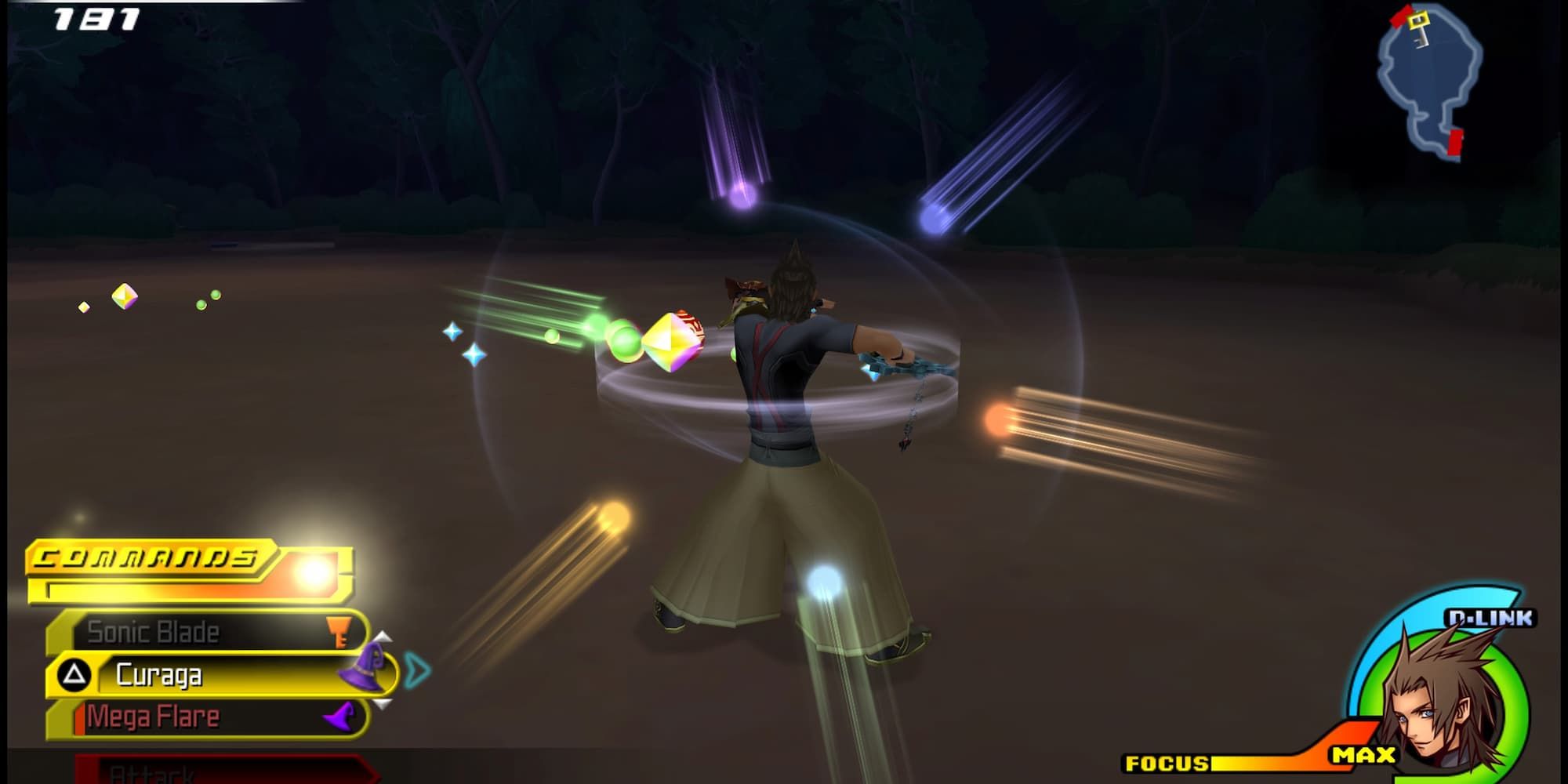 This spell is an especially powerful adaptation of Firaga (and perhaps the most powerful fire spell in the game), and it can be equipped by all three protagonists. Mega Flare launches a fireball so destructive that not only does it wipe out multiple enemies at a time, but it also whites out the screen.

In order to balance out its power, Mega Flare takes almost a full minute to recharge. Luckily, it's not the sort of spell that can miss its target, but even so, you should avoid wasting it. 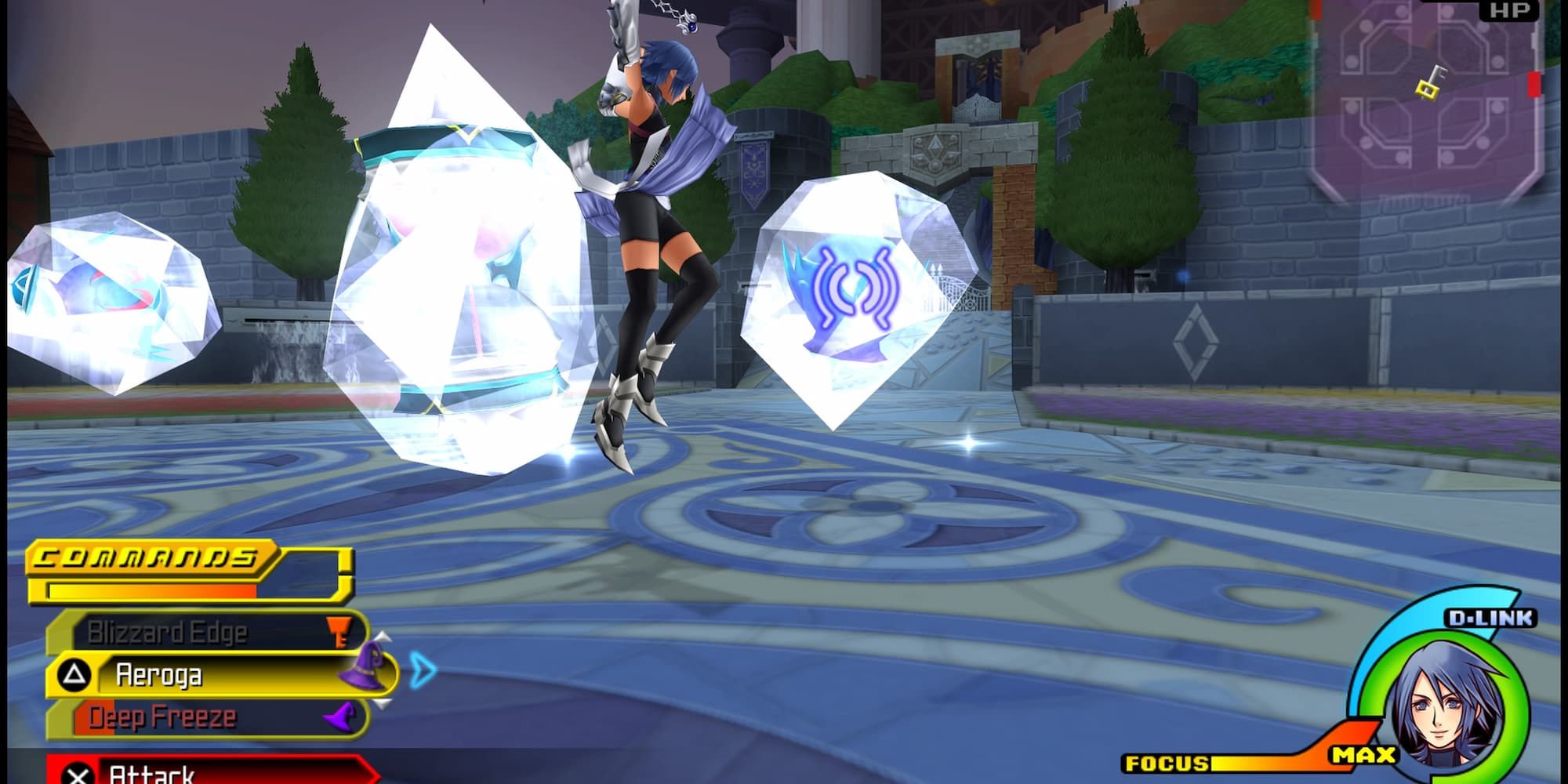 As can be guessed by its name, Deep Freeze is a very powerful ice spell that can be created via Command Melding and can be used by all three protagonists. It deals a huge amount of cold damage in the area around you, and any enemies that are still alive are encased in ice, meaning they take extra damage until they defrost.

Despite its strength, Deep Freeze only takes 20 seconds to recharge, which is a shorter time frame than other spells of similar strength. 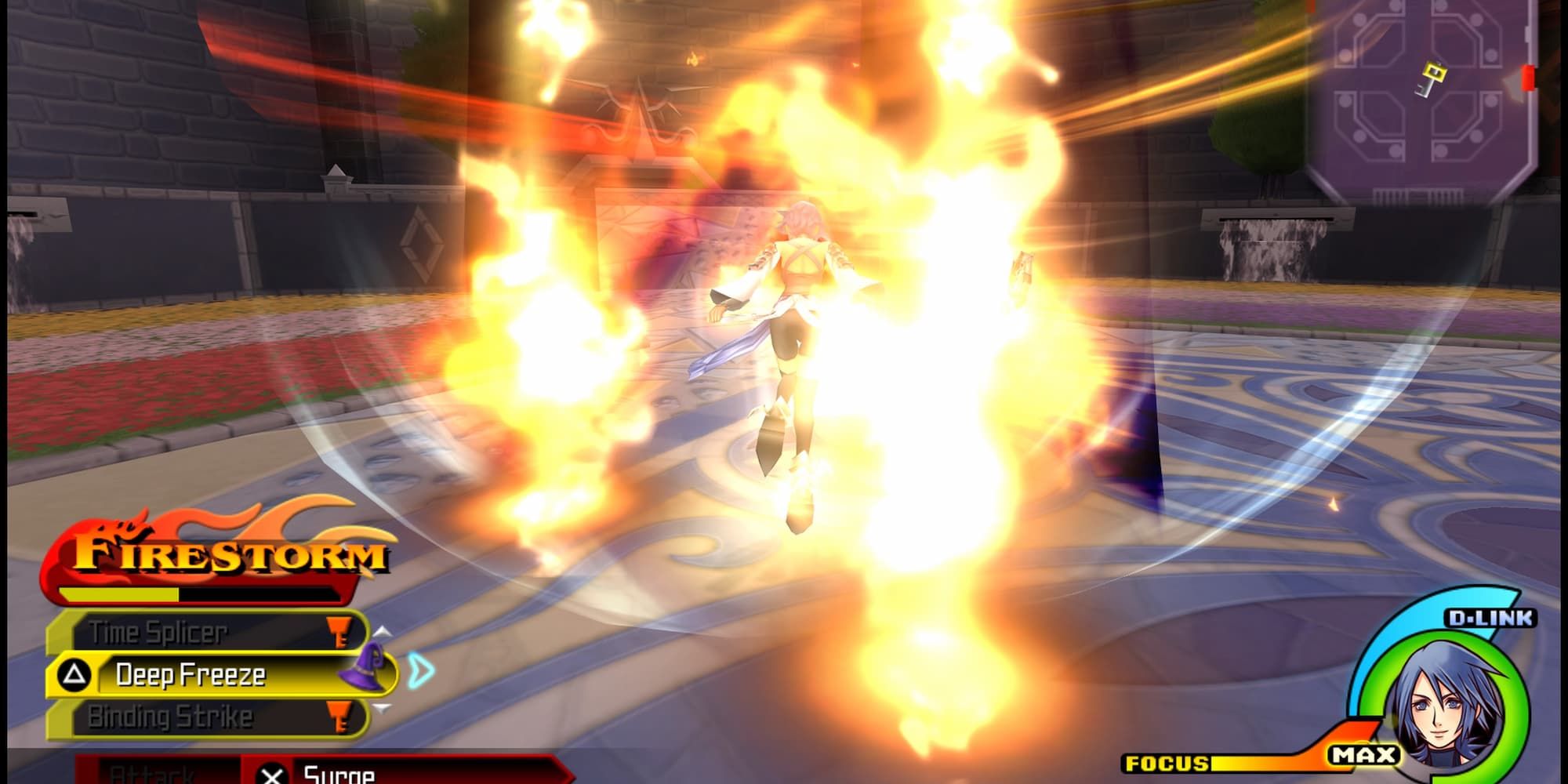 Raging Storm is a fire spell exclusive to Aqua, and it's arguably the best fire spell in the game. When activated, Aqua will be wreathed in flame and surrounded by three fire pillars. She can then hover around the battlefield and deal continuous fire damage to nearby enemies, and the damage itself is hardly a paltry amount.

Raging Storm also doesn't take that long to recharge, so it's a very viable spell. However, it can only be created via Command Melding, and most of the recipes require a Fira spell. 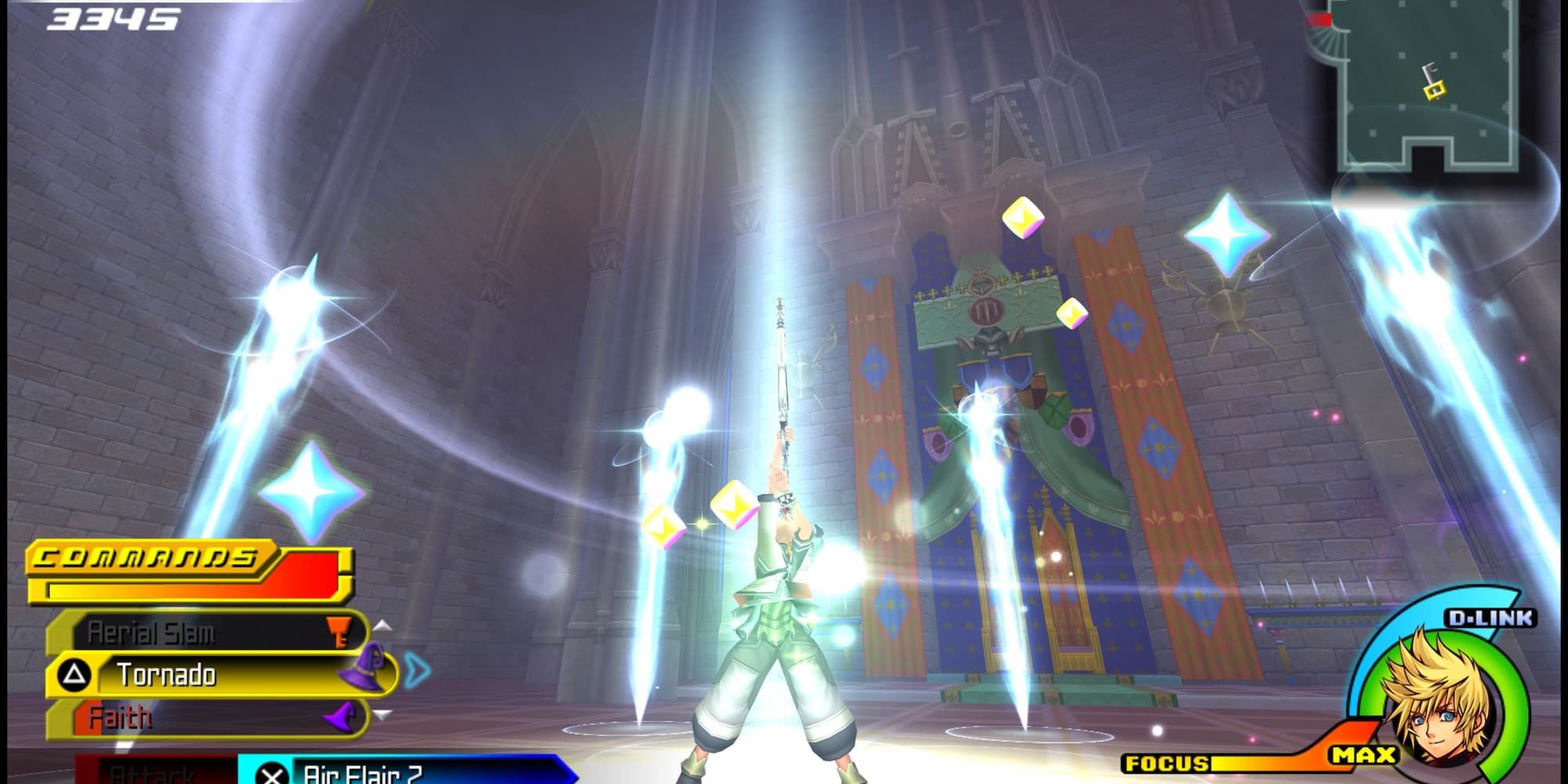 Faith is another spell unique to Ventus, and it causes him to summon several pillars of light around himself, which are then shot outwards and deal heavy damage to enemies they come into contact with. It also restores some of your health.

Kingdom Hearts 2 Final Mix players may recognize this spell as an attack Roxas uses during his fight against Sora towards the end of that game, which is appropriate given that Sora, Ventus and Roxas are all technically connected. KH's storyline is confusing like that. 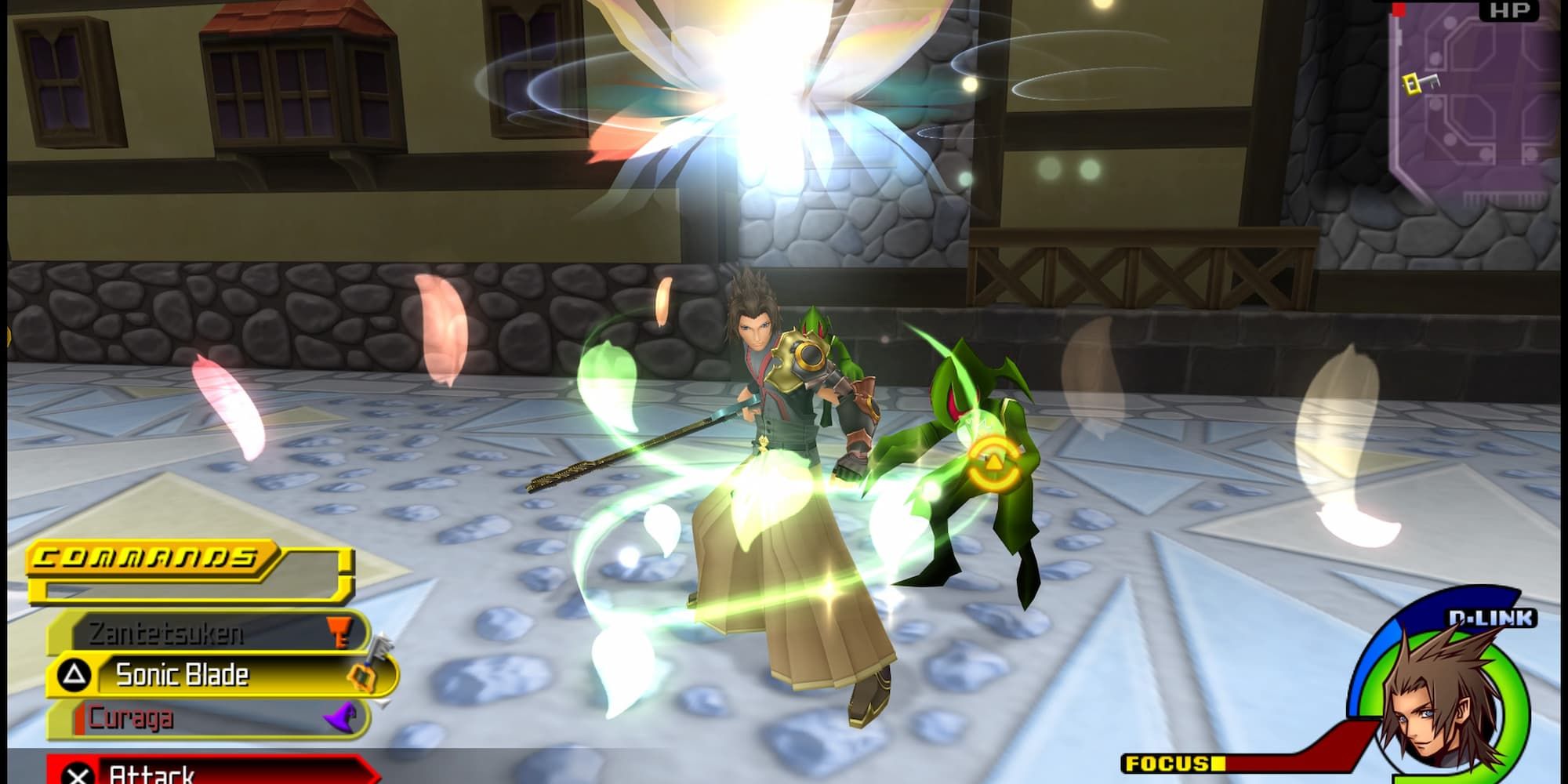 Curaga is often the most useful spell in a Kingdom Hearts game because you'll always need a health supply on standby, and this is one that can't run out. In fact, Curaga an absolute priority when fighting the later bosses (especially on higher difficulties).

Even its 30 second recharge time is no different compared to Cure and Cura, although it's still not wise to have Curaga as your only healing source. In fact, it only takes up one slot in the Command Deck, leaving plenty of room for potions.