As we move further and further into the digital era of gaming, the less important having a standout cover art seems, which is a massive bummer considering how some of the best box art comes from the Super Nintendo and Nintendo 64 time period. However, when it comes to the early 2000s, there were still some heavy hitters.

Whether it's from the masterminds at Bungie with the excellent Halo cover art or Nintendo crafting their phenomenal Japan-exclusive box art for their tentpole franchises, there are many fantastic pieces of art to be seen front and center of many games in the 2000s. 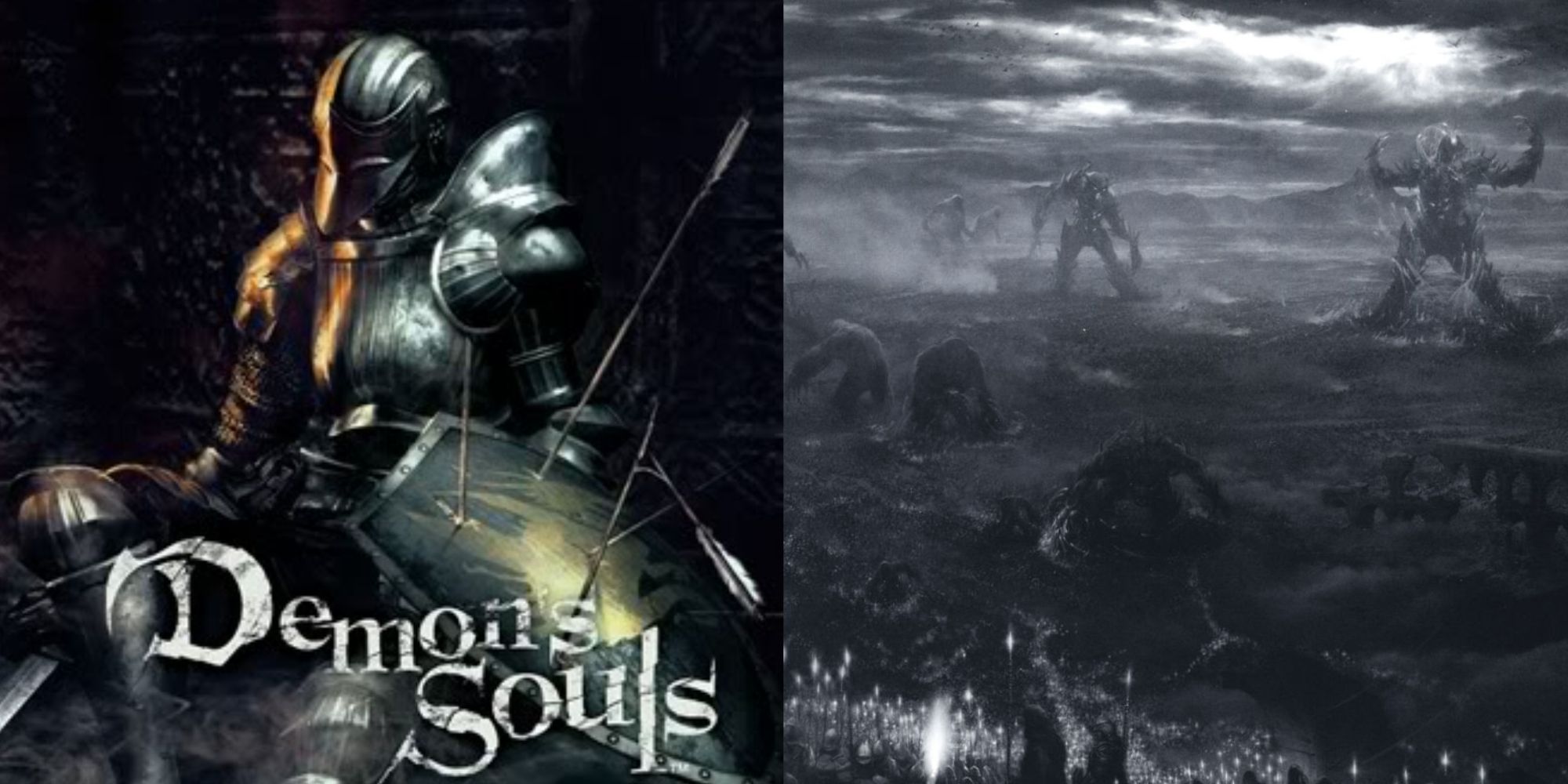 Being the game to kick off the worldwide phenomenon that is the Soulsborne titles by FromSoftware, Demon's Souls' Asia exclusive case encaptured the grueling, dark, and painful worlds of the game, showcasing a knight slumped against the wall with their shield full of arrows.

Compared to the international cover art, this is much darker and paints a more sinister and hopeless image. While we love the other cover quite a bit, this one is much better in largely every way. It does an excellent job of showing you that there will be hardships ahead, but they can be overcome by rising to the challenge and never giving up. 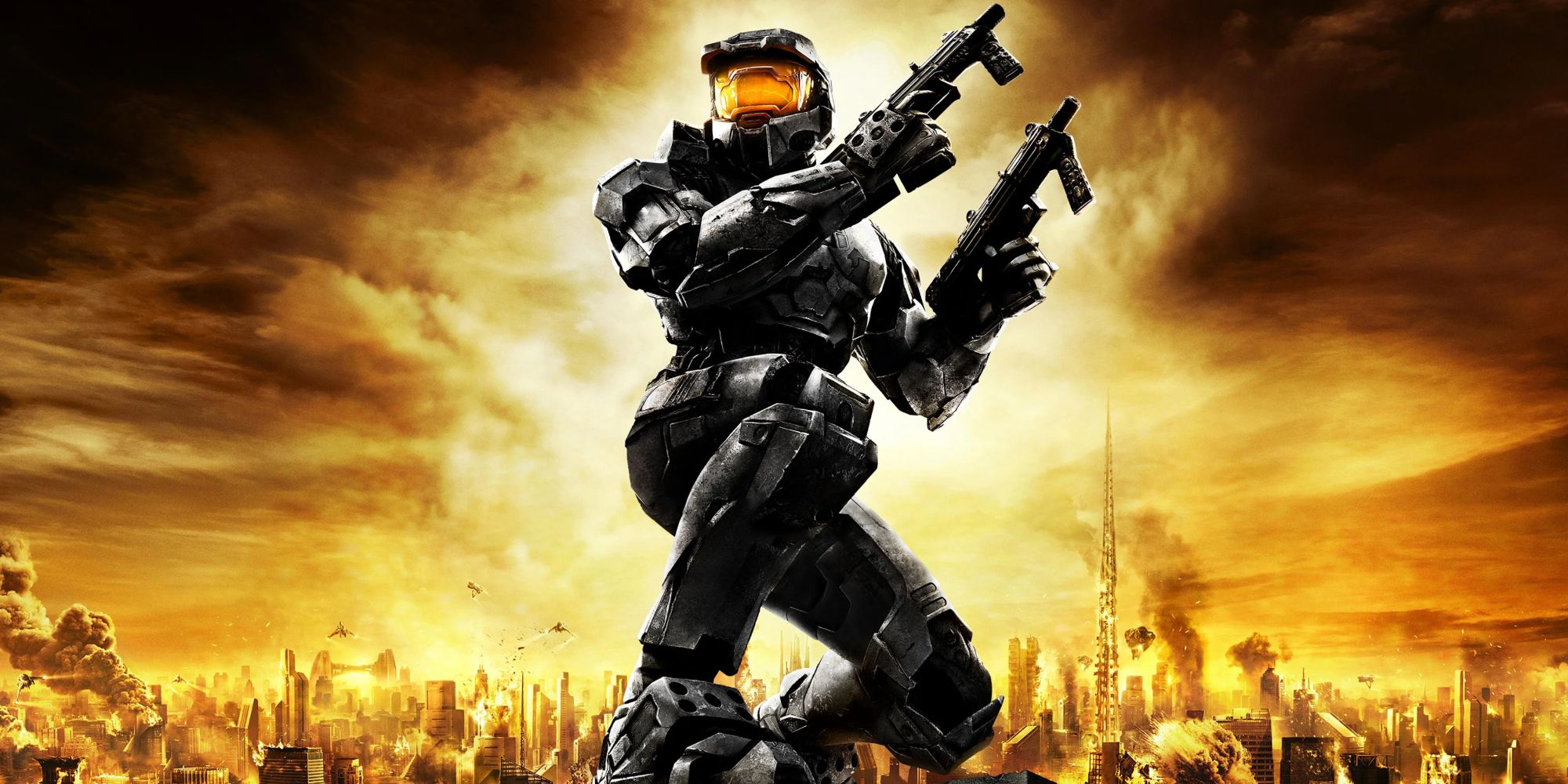 Bungie's Halo titles have some of the best cover art in gaming, with Halo: Combat Evolved being amongst the most iconic you can get for an FPS game. However, when we think of their best box art, our minds immediately hop to Halo 2's classic shot of Master Chief dual-wielding SMGs, crouched atop a wall, with the gorgeous backdrop of New Mombasa's skyline behind him.

Despite the image above being a recreation of the iconic box art by 343 for Halo 2's anniversary, the classic holds up extraordinarily well. The Banshees and Phantoms soaring through the thick smoke in the background add to the stakes at play in Halo 2. You cannot get much better than this, but we would also like to give the nod to Halo 3: ODST, as that cover art is also exceptional. 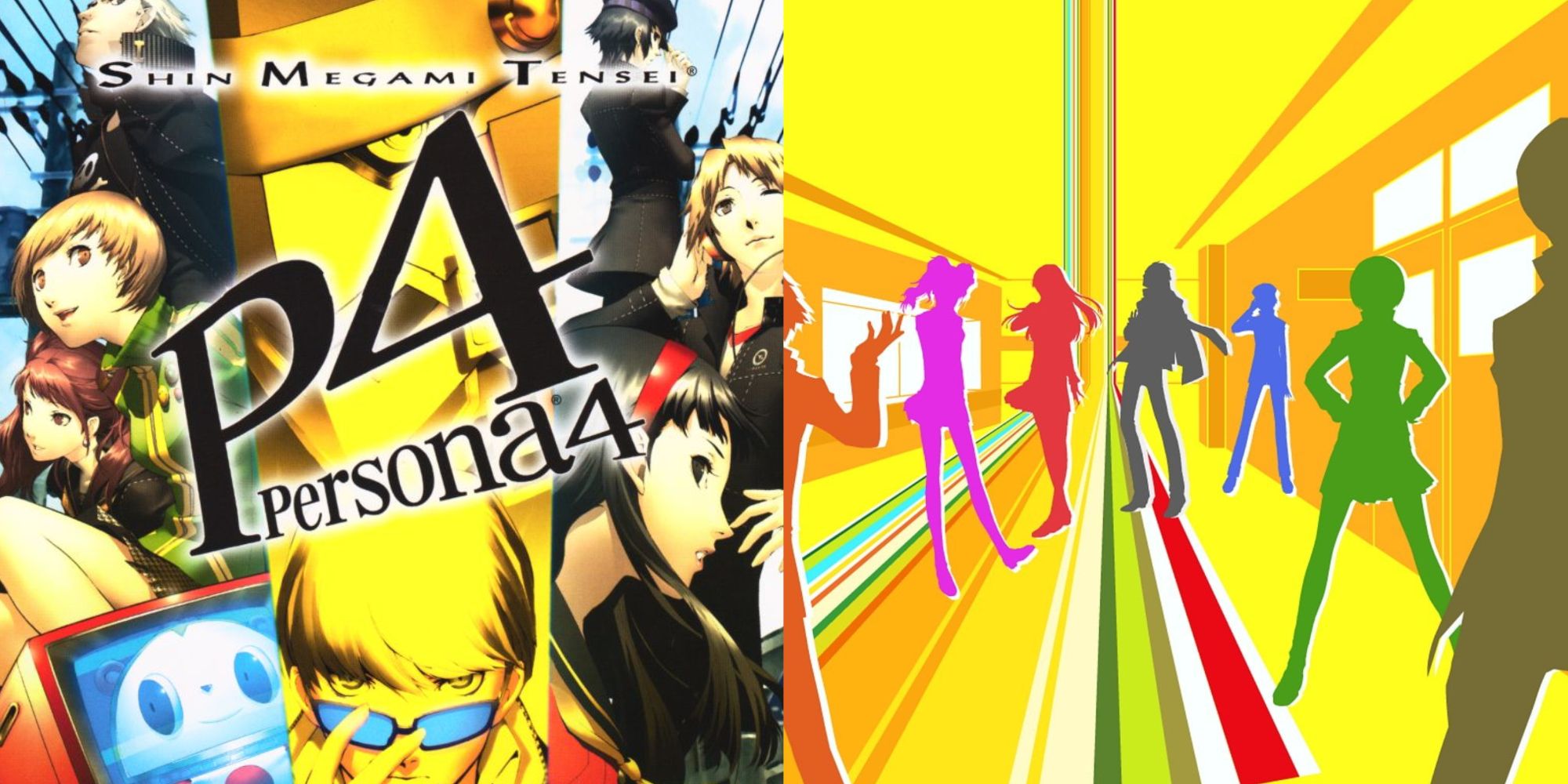 Typically, having a collage of characters on your box art can be very hit or miss and almost always land on the latter side of things. However, Persona 4's does a fantastic job of showcasing the personality of each main character while also drawing focus to the protagonist in a way that doesn't seem overbearing or too cluttered.

The colorfulness of the composition is spot-on for the overall aesthetic of Persona 4, but it also doesn't seem like too much. They showed enough restraint to showcase each of the characters and color, all while avoiding having it look like a total mess, and that's more than enough to earn our praise! 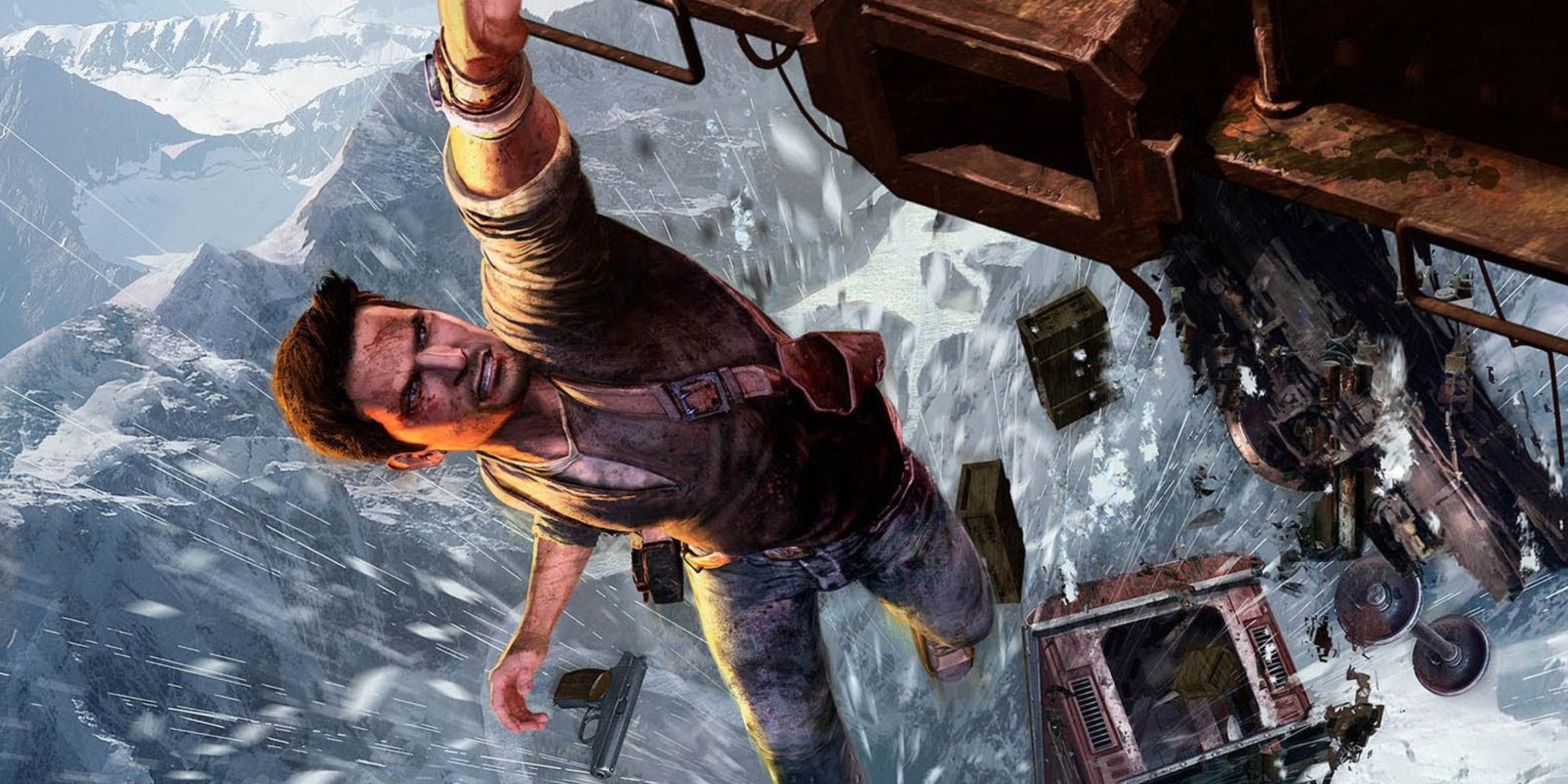 Uncharted 2's box art may be the most one-to-one depiction of the game, which is surprisingly rare in most cases. This shows Nathan Drake dangling from a train cart hanging off the side of a snowcapped cliffside as his pistol and a detached cart plummet toward the ground below, which looks like a massive drop.

One look at this cover art and you know that this will be a thrilling action adventure that will have you on the edge of your seat at all times. And that's precisely what the experience of playing Uncharted 2 is like. No one does it better than Naughty Dog, and this is just the tip of the iceberg. 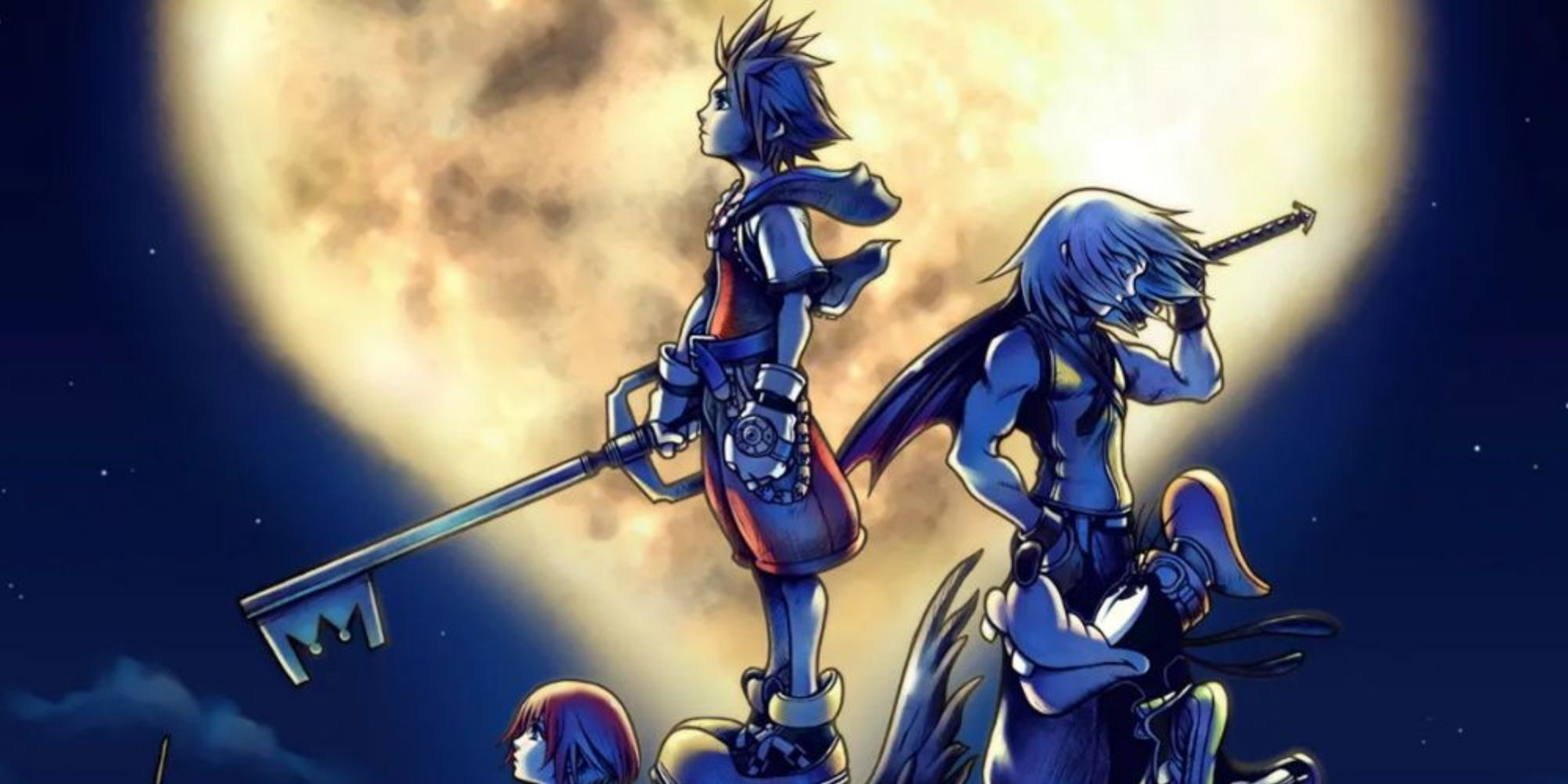 Love it or hate it, there's no denying that the artwork for Kingdom Hearts is nothing less than phenomenal. The way Riku is the only character facing away from everyone else, who is looking toward the light, is such a small but crucial detail. And the heart-shaped moon that illuminates the star-filled sky is beautiful.

Kingdom Hearts may be a convoluted and quirky mess at times, but it's absolutely stunning when it comes to its artistic prowess, and this cover art proves that the more you observe it. While there are tons of unique and breathtaking box art, the one for this game will always stand the test of time, and there's a good reason for that. 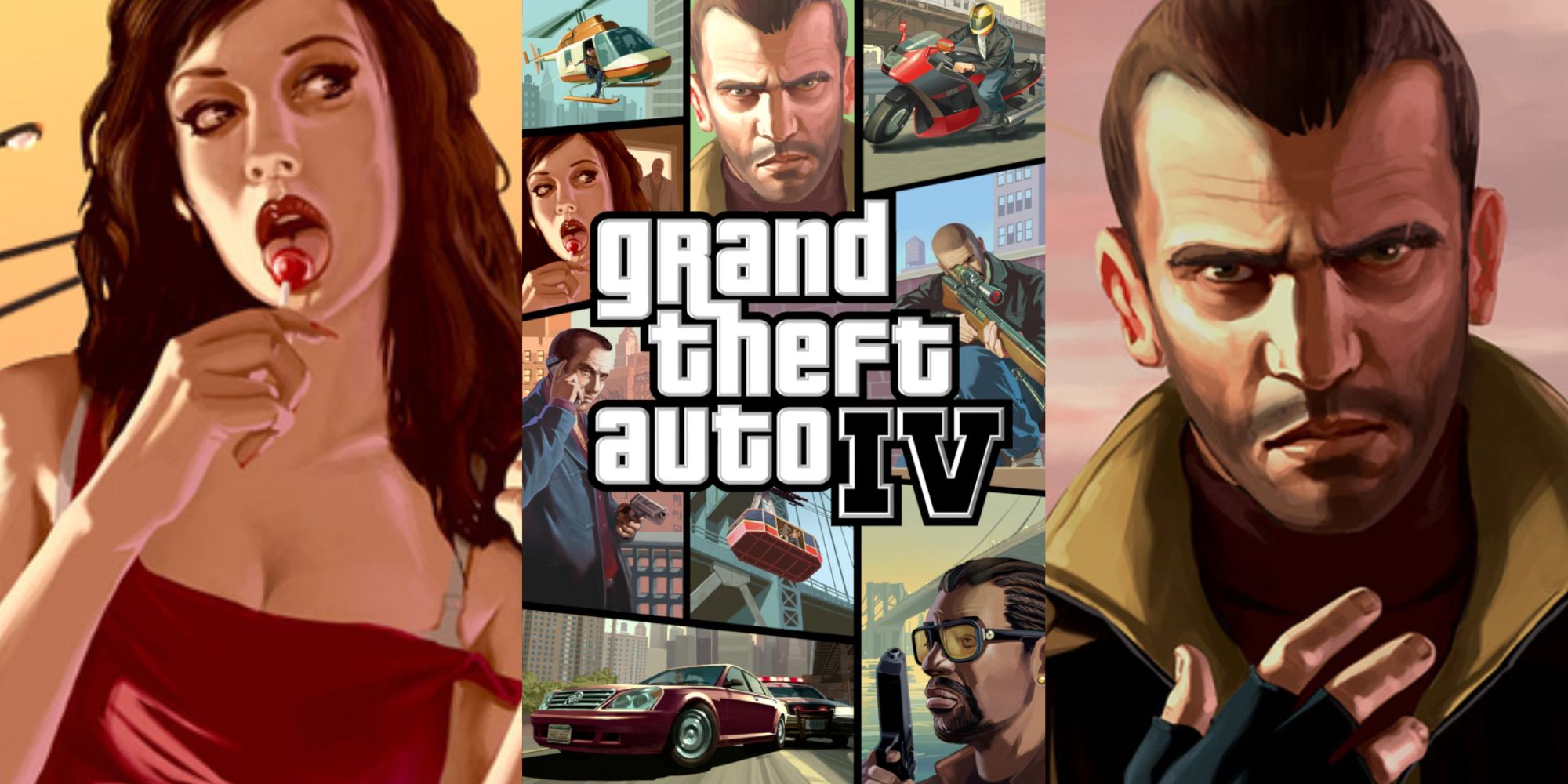 Speaking of iconic box art, Grand Theft Auto 4's box art took what was introduced with GTA 3 and ran wild with it, taking full advantage of the comic book style box format, showcasing various characters and actions in each square, making the most of what real estate they had to work with.

Nico, the main protagonist, is top center, while all the other boxes feature things such as a sniper, someone piloting a helicopter, a cop pulling over someone, and much more. It also features the iconic lady licking a lollipop that people were oddly obsessed with near the game's launch. Nonetheless, it's a cool and stylized cover art that people will remember forever. 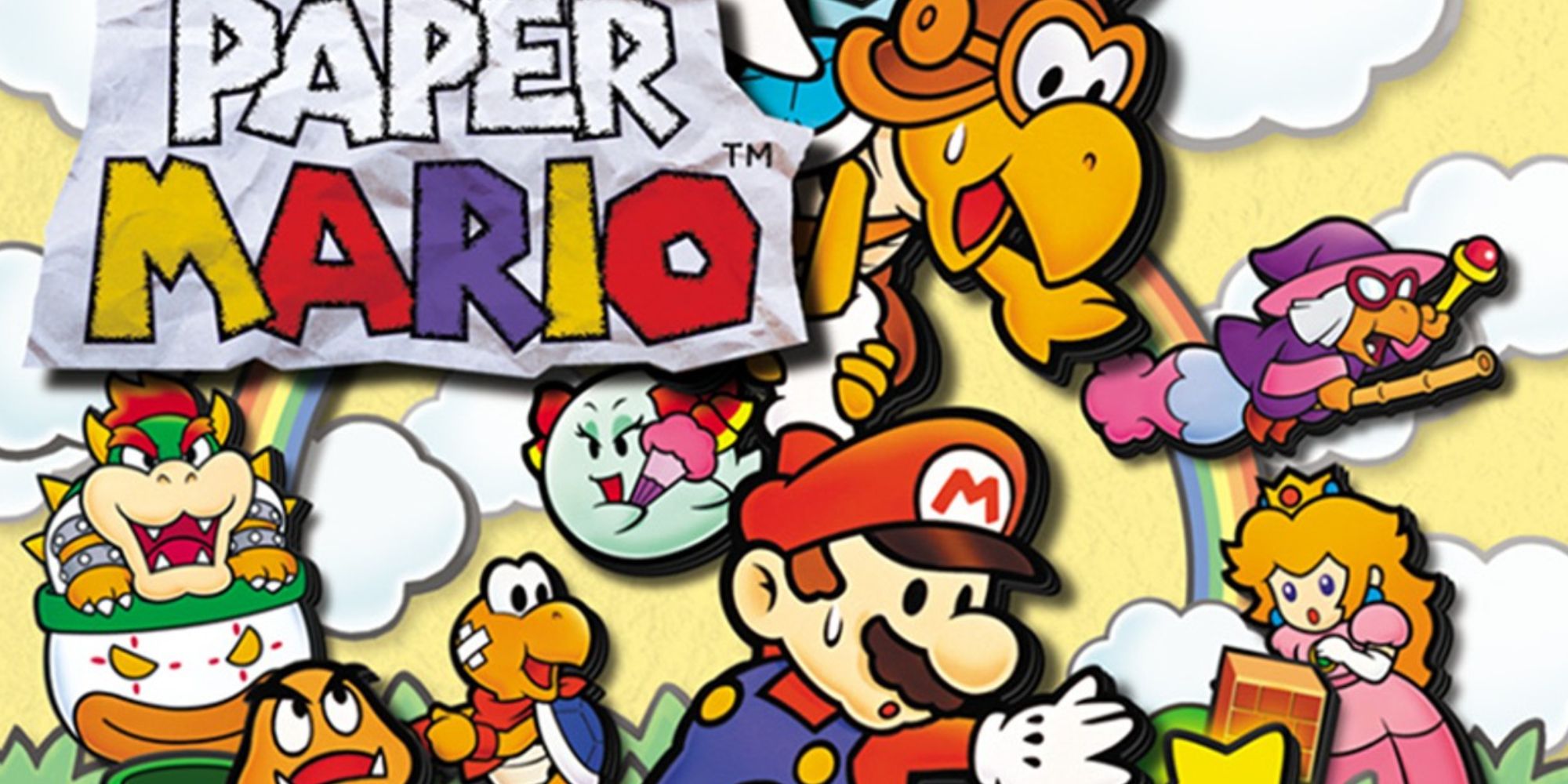 Paper Mario is a series that is rightfully praised for its unique and innovative gameplay, fantastic writing, lovable characters, and unbeatable exploration. Still, barely anyone speaks about the first game's killer cover art. Seeing Parakarry saving Paper Mario from falling with Lady Bow and Kooper behind them fills us with so much joy.

Overall, this is yet another cover art that does a wonderful job setting the stage and including many characters but walking that fine line where it doesn't feel like too much. There's much to unpack in this one photo, and all of it is great, which makes this box art great. 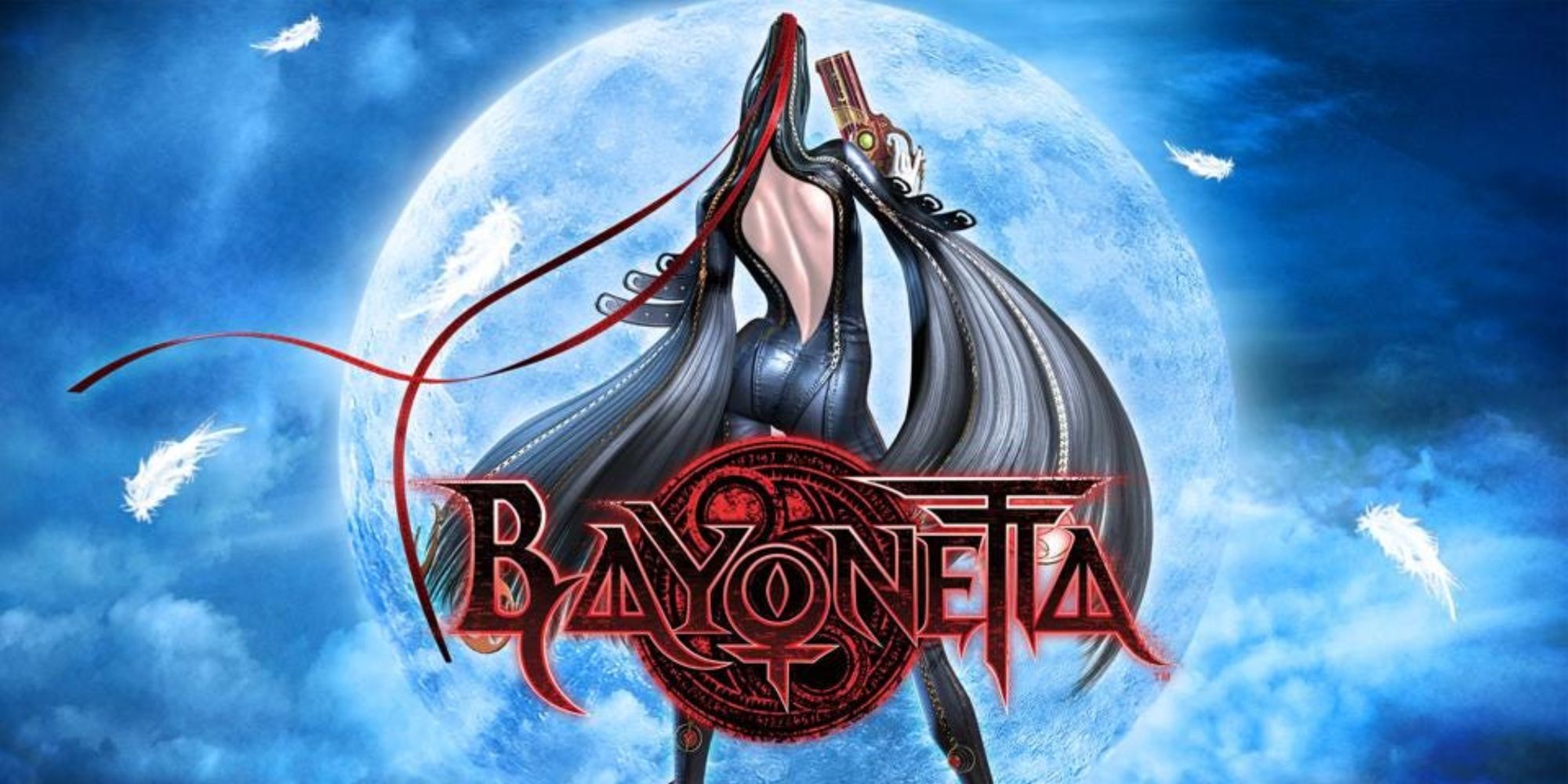 If you remember playing Bayonetta when it was first released in 2009 and wasn't in Japan, you probably remember the box art looking much different than the one pictured above. While the modern re-releases of the game feature this cover art, most didn't, which was a headscratcher then and remains one even now when we look back at it.

Bayonetta standing with her back facing the camera as she stares out at an enormous moon with a beautiful arrangement of clouds and feathers surrounding them, is unbelievably stunning. While this doesn't necessarily capture the tempo or gameplay aspects of the game, it's still a phenomenal piece of cover art that deserves to be mentioned. 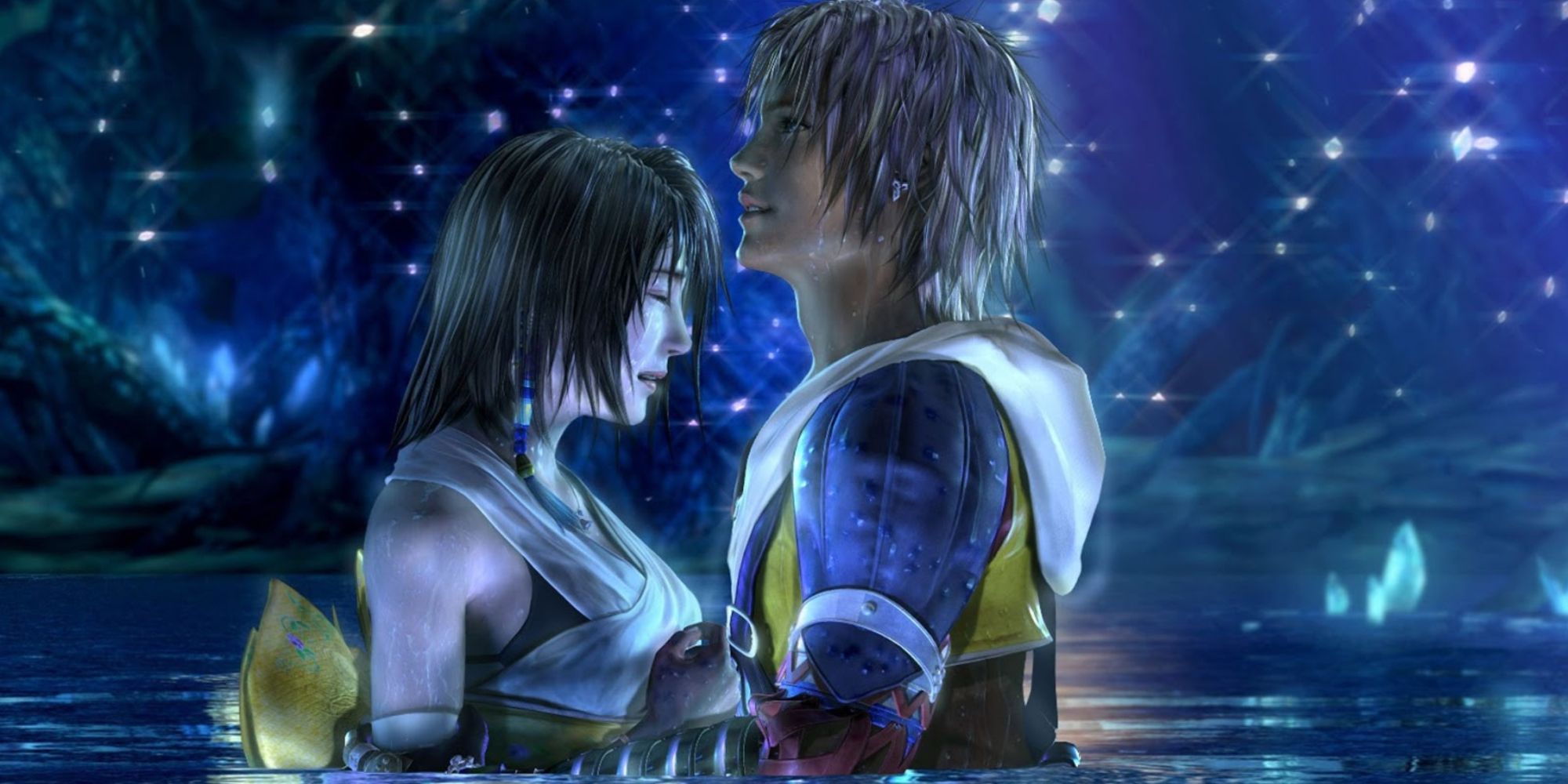 Final Fantasy 10 International is a Japan-exclusive game with one of the prettiest and most distinct cover art of all time, featuring Tidus and Yuna standing together in a pool of water under the night sky. This image is remarkable for various reasons, but seeing both characters in a state of pain and sadness while being backlit by the unbearably gorgeous scenery is something else.

Even the non-International release of Final Fantasy 10 has exceptional artwork and box art, but this one is particularly jaw-dropping. Many fans of the series claim that FF10 is the best of the bunch, and how can you argue that when the cover of the game looks this beautiful? Square always has standout box art, but this one goes above and beyond anything they've done. 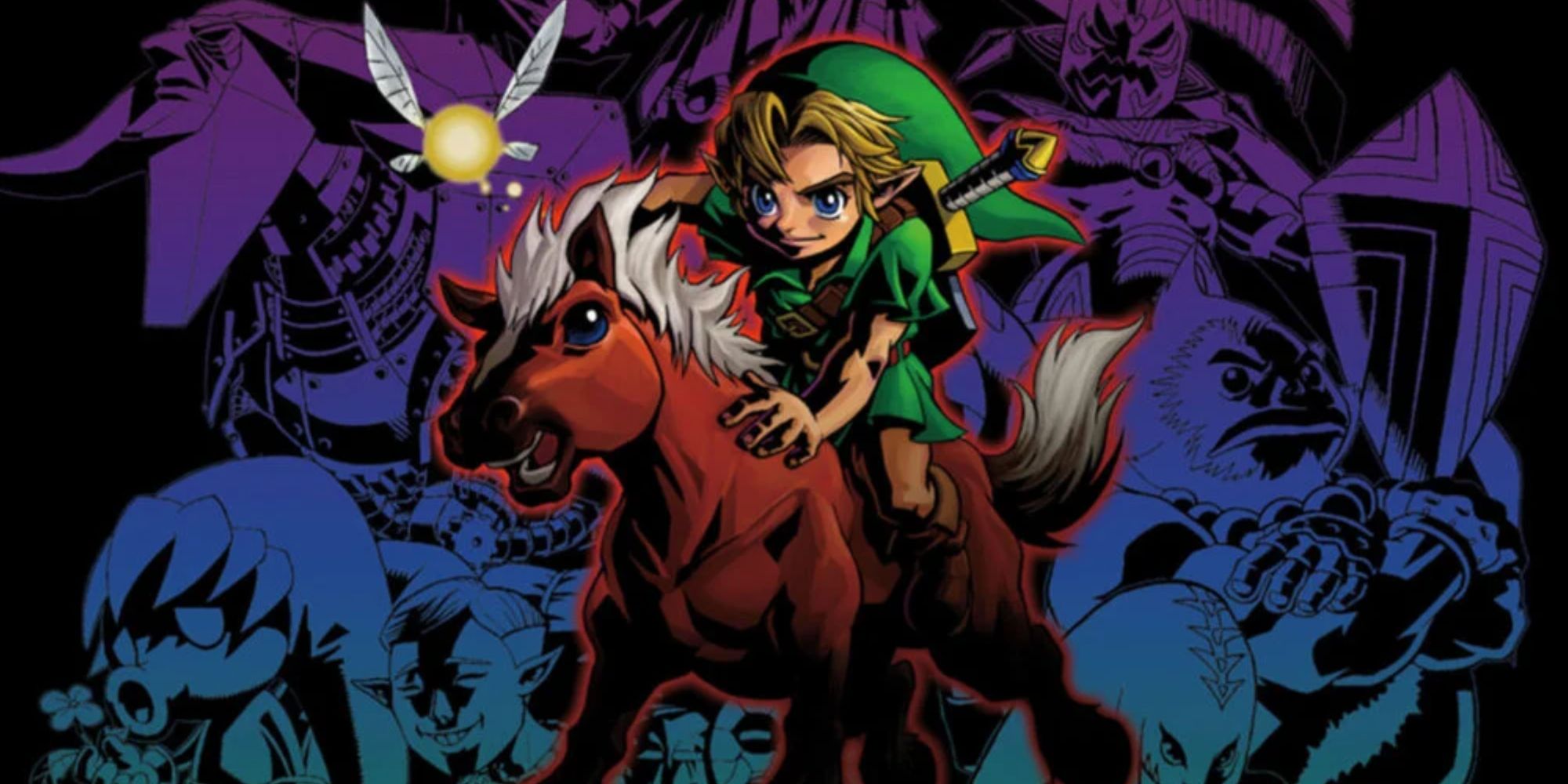 Lastly, we have another breathtaking cover exclusive to the Japan edition of the game, and this time it's for one of the best games ever created, The Legend of Zelda: Majora's Mask. This box art showcases young Link riding on Epona with Tatl ready at your side. But what makes this case shine is the collection of reoccurring characters in the game presented in the background with a brilliant gradient of purple and blues.

Having the Happy Mask Salesman, Skull Kid, Deku Link, and much more present on the cover without it feeling cluttered or slapped together is an achievement in of itself, but seeing how well the colors blend and contrast with a fully colored and realized Link, Epona, and Tatle is what makes this one of the best cover arts ever created.