Since the release of Call of Duty: Black Ops Cold War, there has been a steady stream of updates. The developers at Treyarch have been generally reliable when it comes to fixing known issues, bugs, etc. While the community is still waiting on a few changes to come through, the state of multiplayer is great at the moment. In regards to those changes though, one that’s at the top of the list is a nerf to Flak Jacket. The perk has been considered overpowered since launch, and it seems Treyarch will deliver a nerf in a future patch.

The entire purpose of Flak Jacket as a perk is to shield players from the bulk of explosive damage. Usually, this pertains to grenades, equipment, and scorestreaks. However, in Black Ops Cold War, Flak is doing much more than what it’s intended to do.

When the game first launched, players noticed that getting kills with launchers was extremely difficult. More often than not, you’ll get a hitmaker if you directly impact an enemy with a rocket from a launcher. Obviously, this is not supposed to be happening, but it seems Flak Jacket is to blame.

If a player has the perk equipped, they gain the ability to withstand a direct hit from a rocket. The player will be left with a sliver of health but still, a launcher should be a one-shot kill. Users on Reddit have been complaining about this issue to Treyarch and one developer finally responded. 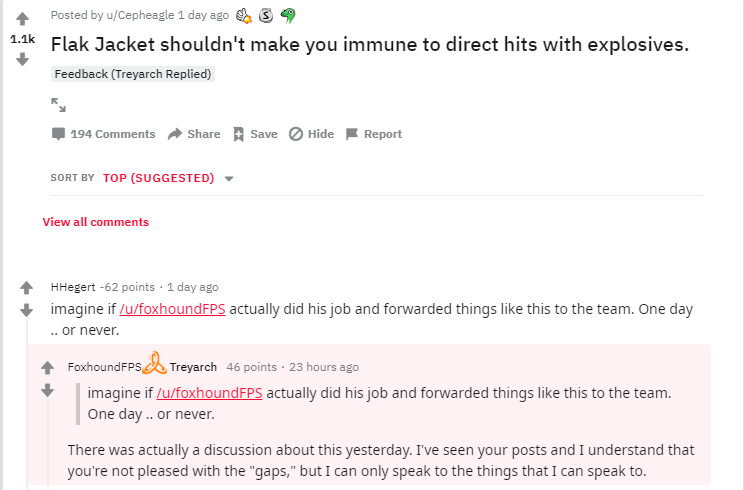 Developer FoxhoundFPS stated that the studio sees the current issue with the perk. There have apparently been discussions around the problem, and this likely means a nerf is coming sooner rather than later. Of course, Foxhound didn’t go into details about what the nerf would contain but presumably, the explosive protection will be reduced.

Season 1 seems like a suitable time for this nerf to arrive, though we can’t be certain. If you want to keep up with Black Ops Cold War‘s known issues or report your own, visit Treyarch’s Trello board.

RELATED NEWS
Astralis pick up first win in 2021 LEC Spring Split against Vitality
Dota 2: DPC Weekly Recap #1 – South East Asia
A grueling 88-minute game three sees Aster upset LGD
CoD: CDL Kickoff Classic – Day 1 Recap
Recent Posts
This website uses cookies to improve your user experience and to provide you with advertisements that are relevant to your interests. By continuing to browse the site you are agreeing to our use of cookies.Ok