As a result, Pixel Bar will host a community League of Legends tournament on September 26th. 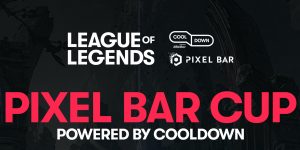 According to the release, the competition will have a minimum £1,000 prize pool with plans to increase the figure before the finals take place. Registration for the tournament is open until July with weekly online qualifiers taking place from August 2nd until there are four teams remaining.

Those four teams will compete at Pixel Bar in front of a live audience.

Pixel Bar’s Director, Craig Ryan, commented: “We’re delighted to be partnering with Cooldown to bring one of the biggest UK esports events of the year to Pixel Bar. This event is open to anybody in the UK and we hope to see some rising talent making it to the live finals later this year.

“Alongside our regular community events, we hope that larger events such as these can help develop the UK grassroots esports scene. We’ve already secured an official peripheral partner for the event but are keen to speak with other interested sponsors and partners to help grow the event.”

Cooldown is a new platform that was launched by brewing company AB InBev. The platform provides esports fans with the ability to find and set up viewing parties in local bars across the UK. On launch day, Cooldown announced a partnership with North American organisation OpTic Gaming.

Joshua Koffel, Esports Expert at AB InBev, added: “Pixel Bar is the most popular esports bar in the UK, with their history of hosting community League of Legends events we wanted to help them achieve their goal of hosting a UK-wide event. We expect to have a huge audience in attendance to cheer on the finalists on September 26th.”

Esports Insider says: It’s a smart decision by Cooldown to collaborate with local esports bars as it increases its brand presence within a key target audience. This likely won’t be Cooldown’s last partnership this year.