You are here:
Home / How to find the missing spaceship parts in Fortnite Season 3

How to find the missing spaceship parts in Fortnite Season 3

Over the weekend, Epic Games released a new update in Fortnite Season 3. While this patch didn’t change anything related to gameplay, it did make a few map alterations. The biggest of these is the addition of the Coral Castle POI, which is located in the far northwest corner of the map. Many players were expecting this to be the Atlantis POI, but it seems Epic went another way. Besides that though, there was one other small map change that came with the update, and it has to do with finding missing parts for the Ancient Astronaut spaceship.

The missing parts for the Fortnite spaceship

The Ancient Astronaut ship is located to the north of Craggy Cliffs, just off the coast. It’s situated on a small island and has some wreckage lying around it. For a couple of weeks, the ship just sat there, causing wonder among the community.

However, thanks to the weekend update, this spaceship now holds a side quest in Fortnite. The first time you visit the ship, you’ll earn an achievement for visiting the “Ancient Spaceship.” Of course, there’s more to the puzzle than that. After you visit the ship, you can collect three missing ship parts to actually launch the craft.

You’ll need to find the Thruster, Battery Pack, and Heat Shield, which are located near the spaceship itself. Here are some short descriptions that detail where you can find each missing part: 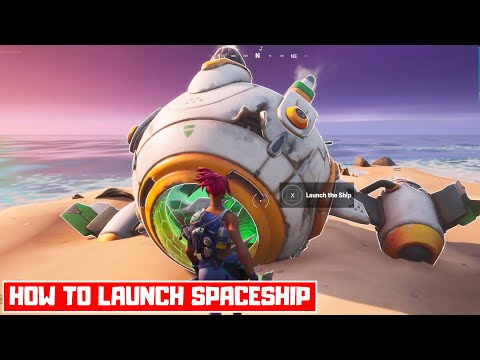 For each part, you’ll have to collect it then go back to the ship and insert it into the correct slot. Once you’ve done all of that, the spaceship will launch off into the Fortnite sky and earn you a total of 39,000 XP. In addition to seeing the launch, after the event occurs, players can use four different Rifts placed across the Fortnite island.

That’s it for this challenge guide! Make sure to keep up with Daily Esports for all Fortnite news.

RELATED NEWS
Riot Games strikes global partnership with Barracks – Esports Insider
CS:GO Operation: Broken Fang all new skins – pictures
Valve launches new CS:GO operation, Broken Fang
Black Ops Cold War ‘First Strike’ playlist features Crossroads and Armada
Recent Posts
This website uses cookies to improve your user experience and to provide you with advertisements that are relevant to your interests. By continuing to browse the site you are agreeing to our use of cookies.Ok