You are here:
Home / Has the Mini-Uzi overtaken the MP5 in competitive Modern Warfare?

Has the Mini-Uzi overtaken the MP5 in competitive Modern Warfare?

The Call of Duty: Modern Warfare competitive meta hasn’t undergone many shifts since the initial launch. At the start, players were focused on four main guns: M4A1, Kilo-41, MP5, and MP7. Two assault rifles and two submachine guns were in the meta because some players had a personal preference. However, as time went on, it was clear that the M4 and MP5 were the superior weapons. Since that realization, the meta has not shifted much. Though, this could very well change after last night’s big update in Modern Warfare. It could finally be the Mini-Uzi’s time to shine as the MP5 was severely nerfed.

Using the Mini-Uzi over the MP5 in competitive?

While on paper it seems the MP5 was nerfed into the ground, the initial reaction is the SMG is still strong. Its damage range was the main target of the nerf, but players are reporting little change to the weapon. However, it could be just enough of a change for a new SMG to enter the fold for the first time since 2019.

The Mini-Uzi has traditionally been a throwaway gun of sorts in Call of Duty. In Modern Warfare, it’s seen steady buffs throughout the game’s life cycle but nothing major enough to warrant a meta change. Though, with the MP5 now nerfed, it could be time for the Uzi to make an appearance.

We actually saw the Mini-Uzi in play at a recent Call of Duty League event. Dylan “Envoy” Hannon of the Chicago Huntsmen brought it out in a Hardpoint on Gun Runner to everyone’s surprise. The weapon performed fairly well, and other professional players started to take notice. 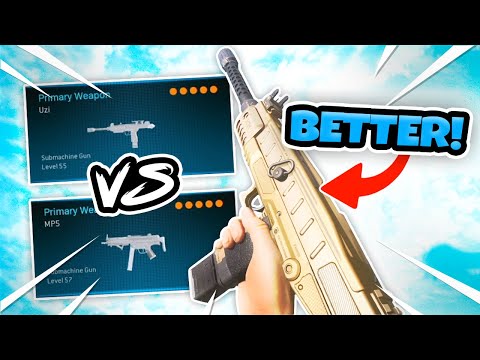 With the MP5 now a little less strong, it’s completely reasonable to think competitive players will start to equip the Mini-Uzi. If you’re one of these players looking to change, check out this attachment loadout for the best results:

Only time will tell if the Mini-Uzi will overtake the MP5 in the Modern Warfare meta. Perhaps we’ll truly see at the next CDL event on July 10.

Will you use the Uzi instead of the MP5? Let us know, and keep up with Daily Esports for all Modern Warfare and Warzone news.