According to the release, the new partnership will be centred around ‘engaging esports and Counter-Strike fans’ by highlighting skins that are available to trade and purchase online. 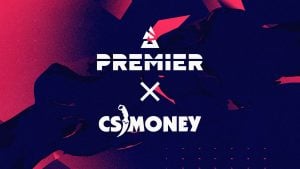 Both entities will collaborate on player-led content pieces throughout the year. CS.MONEY will also sponsor BLAST Premier’s ‘Play of the Day’ broadcast segment, as well as gain access to physical and digital branding assets across the CS:GO series’ seven events in 2022.

Oliver Clarke, Head of Brand Partnerships for BLAST, commented: “Extending the sponsorship into a fourth year is testament to the belief and satisfaction CS.MONEY have shown in this partnership, that we’ve built up from 2019.

“The result of this hard work is shown by their skin trading platform becoming synonymous with our Counter-Strike tournament and we hope to build on this further in 2022. Four years is a long time in esports and we’re really proud of the content and activations we’ve delivered during this period.”

BLAST Premier has also stated its renewal with CS.MONEY is the first in a number of extensions with previous partners for this year. Last year, BLAST Premier’s commercial portfolio included the likes of electronics retail company Elgiganten, Kia, ice cream brand Magnum and cryptocurrency exchange platform Coinbase, among others.

Artsiom Rabtsau, Chief Marketing Officer at CS.MONEY, added: “Skins have been for a long time a natural part of the Counter-Strike ecosystem along with esports. This is why it is so important for us to support the CS:GO community by allowing them to trade skins safely and comfortably and by supporting events like BLAST Premier as well.

“We want Counter-Strike fans to have more emotions not only from having a new skin in their favourite game but from watching spectacular games. And I am sure that our partnership with BLAST will play a major role in that.”

Esports Insider: CS.MONEY and BLAST Premier’s partnership makes all the sense in the world given the overlapping audience. As such, it’s no surprise to see both entities continue to collaborate in 2022. It’ll be interesting to see which other partners have renewed with BLAST Premier this year, with the CS:GO series securing a range of long term and short term collaborations with brands in 2021.